Even with the drop today, Bitcoin still on pace to hit $100k by the Summer

Bitcoin continues to track where it should be based on past patterns...

Bitcoin had a nasty drop today, but that doesn't mean the bull is over.

In fact, even if this does end up being a 30% correction, the big orange coin is still on pace to hit $100k by this summer.

I talk more about that in this post here:

In fact, even after the drop today, the price is basically right where it should be.

It's smack dab between the previous two post halving rallies, sitting right about on that "average" line as I type... 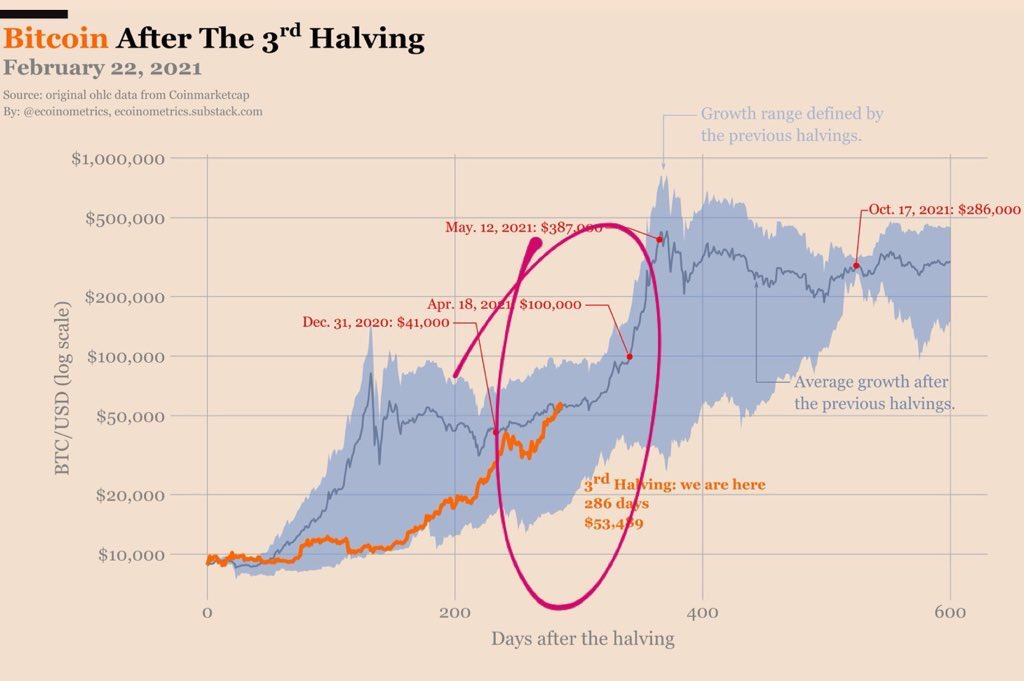 Continuing to follow that average would point to bitcoin hitting $100k by April 18th.

And that prediction only ended up being off by a few weeks.

Given that fact, and the fact that the summer is seasonally very strong for bitcoin, I see no reason why it can't hit $100k sometime between May and July.

Most of you reading this noticed the absolute carnage in the altcoin markets as well as the bitcoin markets today, however, it wasn't just crypto...

The stock market as a whole didn't get beat up too badly, with the Dow actually closing up today, but there was a massive rotation taking place under the surface.

There was a ton of movement out of the high flying tech stocks into energy and financials as tech got clobbered and the former did pretty well.

This trend may continue for the next few days and it may include crypto as well.

A lot of the same people own bitcoin and TSLA for example, when bitcoin tanked, TSLA got sold off as well, dropping by some 10% on the day: 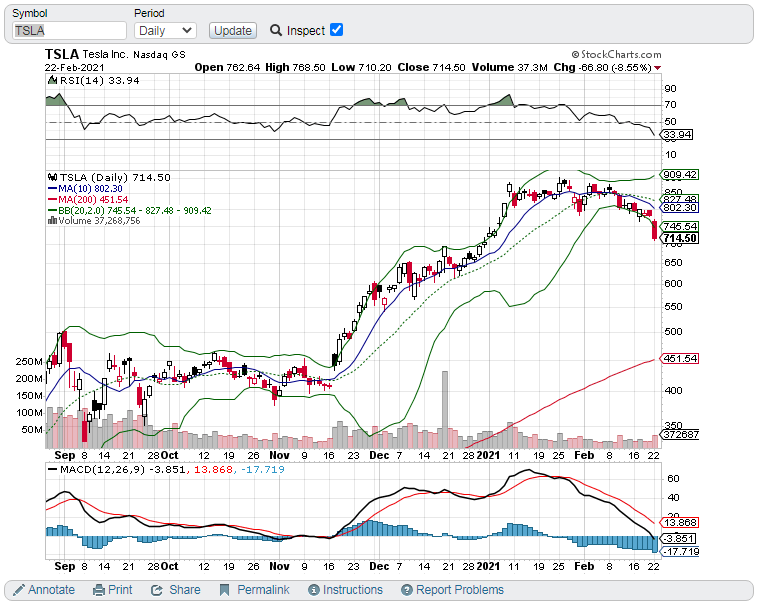 I think this rotation is something that we are likely to see continue play out over the coming days as the 10 year yield continues to rise, basically signaling that the economy is likely to start rebounding and reopening in the near future.

Due to this, money is repositioning for this reopening trade which is going to weigh on tech and possibly crypto.

However, with more stimulus on the way in the coming weeks and the FED not going away anytime soon, I think once this rotation is mostly finished, those stocks and bitcoin (crypto) will resume the uptrend that's been in place the last several months.

This all points to bitcoin and crypto doing very well by this summer.

I personally thought we might get to $60k before we saw this sort of price action with bitcoin, but I guess it started a little earlier than expected.

Now the only question is whether it goes for the full 30% or holds up somewhere short of that...

I think it's more likely that the crypto market top will be later than earlier because the 2017 top emerged later in the cycle than the 2013 top. But that's just a gut feeling I'm beginning to doubt because the demand is now coming from institutions and because they tend to think differently from retail.

Also plus the fact that bitcoin tends to peak in December adds credence to the idea it might take a little longer to peak during this cycle.

The economy is likely to start rebounding

If bitcoin drops under 40k im going to get cocky again and start making bets!

Because they (governments) are opening it back up and people are getting vaccinated... Pretty clear what is going on.

People are getting vaccinated!

Not sure what you are saying here...

I can see that...even if you are not interested in what is in those so called vaccines, you might be interested in some other side effects of agenda 2030 one day

Yes it effects cryptos... but too much red pill for you I guess...

I just keep my head in the sand and follow the green pill (money pill).

Really all you need to know is look at the yields on the 10 yr Treasury to get an idea of where things are heading...

Didn't "they" sell a big Cash fund yesterday?
I remember some news from last week, calling out the 22nd of Feb.

Cash fund? Sorry, not sure what you are referring to?

To this interview with Gregory Mannarino:
https://peakd.com/economy/@activistpost/the-federal-reserve-is-preparing-for-a-massive-market-crash-and-credit-freeze

Sounds like FUD to me. There won't be any massive market crashes any time soon.

Ah ok...thanks, i trust your opinion a bit more 😉

I am surprised as well that there was this kind of correction. I expected it at 70k.. oh well, we all know it's going to go up again :)🤞

Noted. Agree. All those 1400 plus companies at the Micheal Saylor meeting, along with the 2000 on zoom are buying Bitcoin, as are celebrities late to the party, plus anyone who sees the dip as a buying opportunity. Up up and away...

@jrcornel,
I think it will reach 200K before the summer.
!wine

I do love these projection charts..., someone has been back from the future! !WINE

It's amazing how closely it keeps tracking right along with past patterns...

I remember when the stock market and the crypto market were pretty much the polar opposite of each other when it came to one going up and the other going down. Now it seems that they pretty much follow each other in lock step. Do you think that is going to be the norm now that the big institutions are starting to invest more?

Yes I do. I think with big institutions involved, we are going to mirror the NASDAQ to some degree. This is because the same institutions that own tech stocks are the most likely to also own bitcoin.

That is what I kind of figured.