A trend that has been in place since about March of last year continues to work as the total supply of bitcoin sitting on Exchanges continues to fall, week after week.

With the latest numbers showing new year-to-date lows in terms of bitcoin on Exchanges, which is significant considering every day that goes by more and more bitcoin are created.

Which means, if you looked at the numbers sitting on Exchanges as a percentage of it's current total supply, the net outflows off exchanges would look even more impressive. 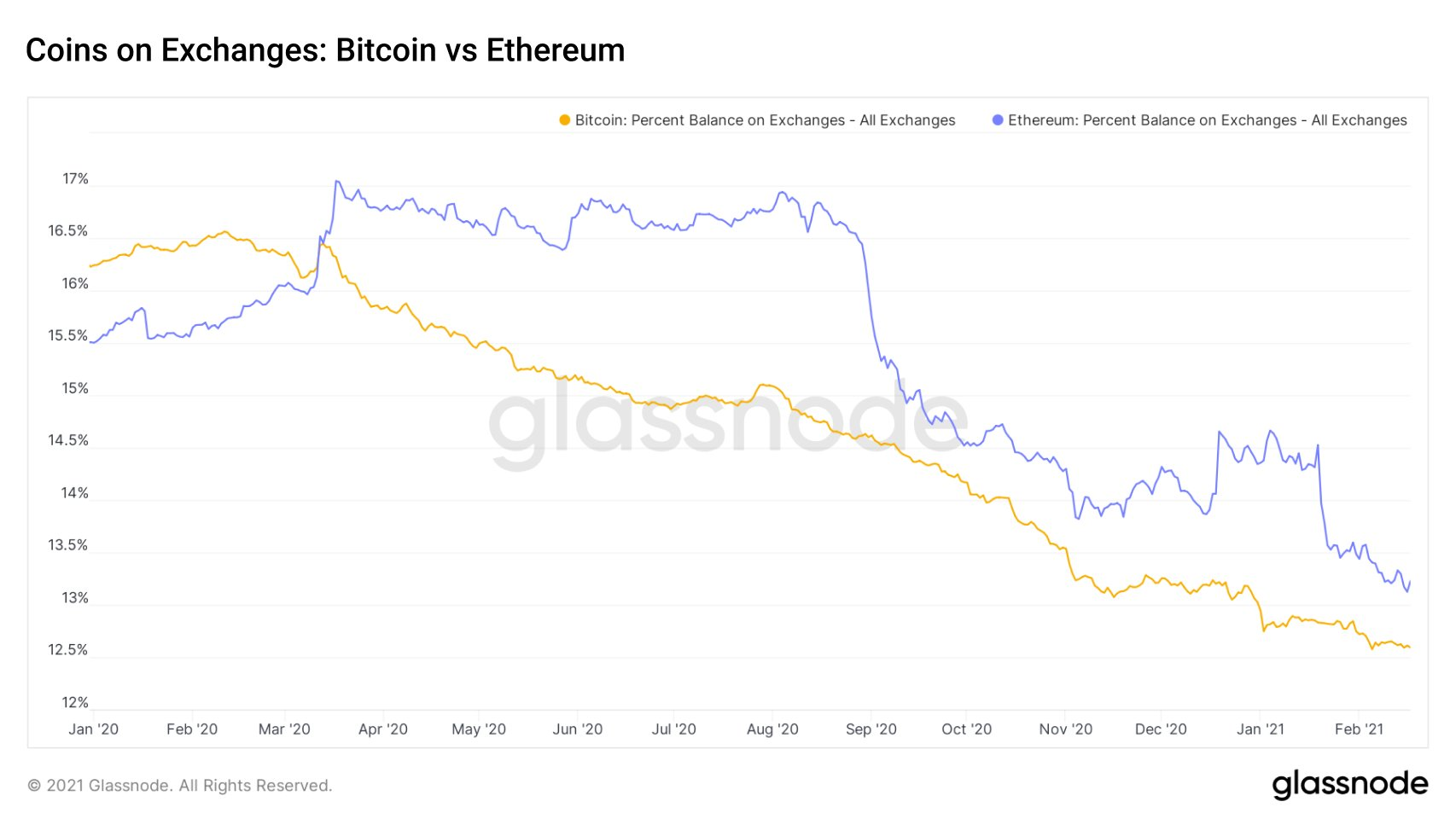 Also, as you can see on the chart above, it's not only bitcoin that's been seeing this trend as Ethereum has since joined in on the fun as well.

Since about August of last year, ETH has seen a major reduction in the number of coins sitting on Exchanges as well and it's also making new lows currently as the price keeps climbing higher.

Not only is the supply on Exchanges dropping, but the support levels on the charts keep climbing...

Based on data from glassnode, it looks like the new major support area looks to be around $48k.

In fact, it looks like the $48k area has now become what the $35k area was previously... 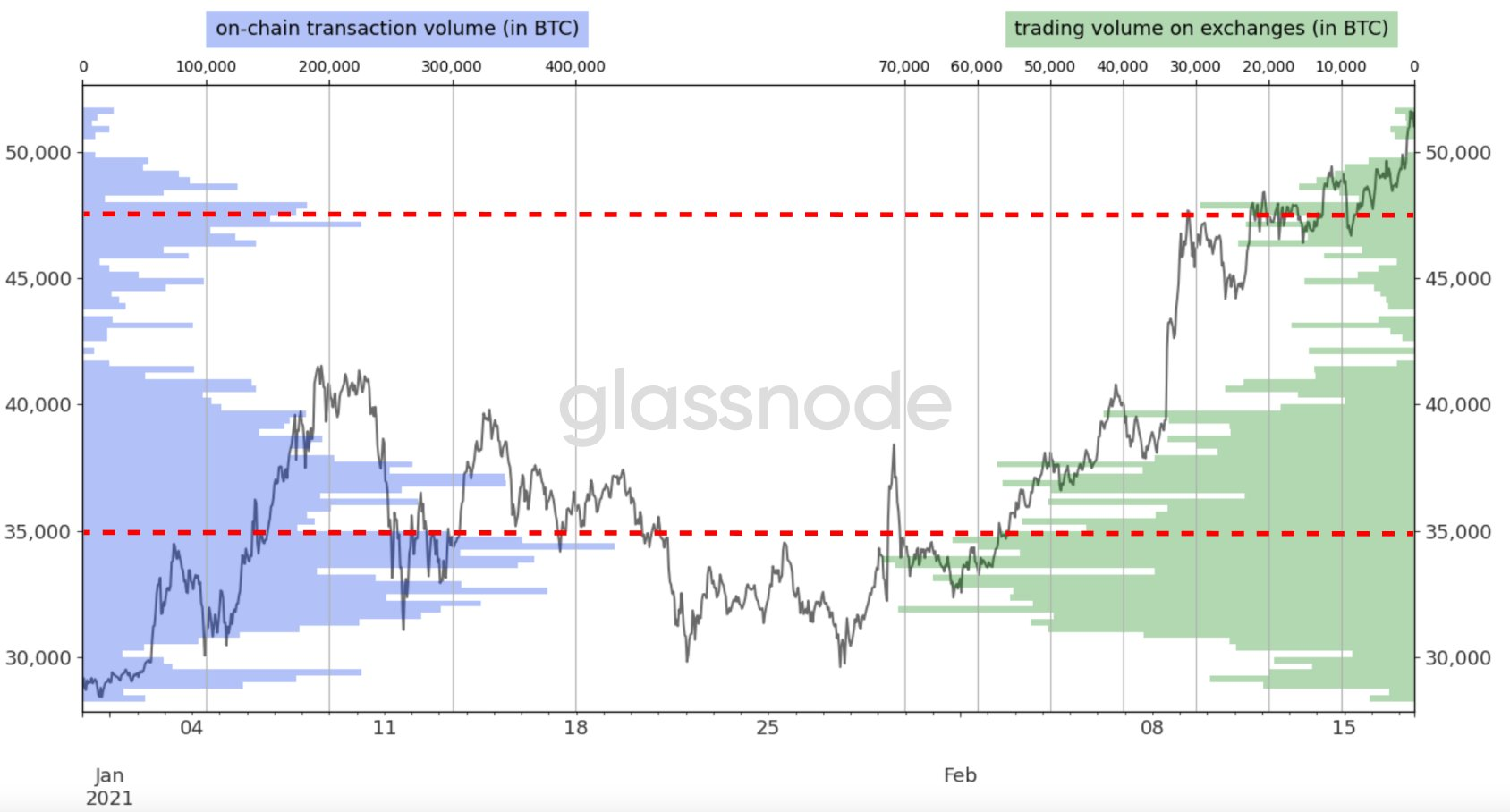 The places of high transaction volume often work as major support and resistance levels, and as you can see on the chart above the highest levels of activity are around $48k now, compared with $35k previously.

It sounds pretty neat talking about $48k being a major support level when we trading around $9k at this time last year.

The way things are going, it looks like the path of least resistance is going to continue to be higher. The next are of interest for me is gong to be around $60k.

Based on past patterns, the area between $60k-$75k is going to be where the next 30% correction starts from, meaning a local top is likely to occur in that range.

This will be a long term bull run as I have notice that there is significant difference in the volume between the 2017 rally and the present rally. As we say in technical analysis, volume confirms price changes and that is what definitely is happening with crypto currencies in general.

For sure, though I still think there will be an 80% crash once we peak similar to the other cycles... even if Michael Saylor disagrees. An 80% drop from $200k brings us to about $40k.

This is very good information.

What's your take on where ETH will start its correction next?

Honestly... I have no idea. I don't have nearly as good of a feel for ETH compared with BTC. I do think it could get to $5k this year though. I also think if everything goes right, ETH will eventually be more valuable than BTC... even with BTC being worth many multiples of where it is today. I just think that next Facebook's Google's and Amazon's of the world will be built on ETH and will give it tremendous value.

The Facebooks of the future will be based on something entirely different from Ethereum. Hive has a future in being the backbone for some Web 3.0 apps.

I wish I agreed. ETH already has the name-brand, and as we have seen with Bitcoin, having the name-brand and first mover advantage is often very difficult to replace.

I feel like other projects already had their window to replace Ethereum from 2017-2019 and they didn't take advantage of it. Now, I think Ethereum is too far entrenched to be replaced. I hope I am wrong though, for HIVE's sake!

The name brand is meaningless when Ethereum gets totally jammed up. It makes no sense to build a social media platform where a single transaction costs $100. Doesn't work. Would you like to pay $100 to vote on a post or to transfer a tip worth $1?

The move from Ethereum to other DeFi platforms with much cheaper transactions is already happening. Protocols on Binance Smart Chain such as PancakeSwap are all the rage now. That's because it is IMPOSSIBLE to do low-value transactions on Ethereum right now no matter how much you loved the Ethereum brand. Here's the token price history of the CAKE token: 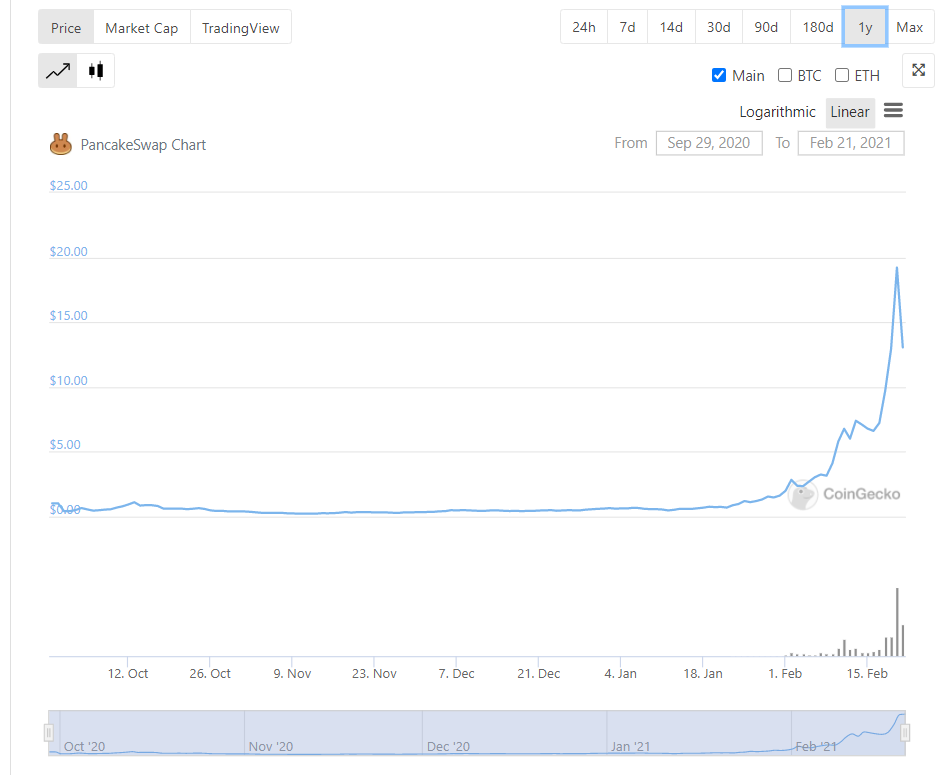 The price has gone up more than 20x in a month! That's because of massive adoption. People have no choice but to go elsewhere when Ethereum block space becomes too expensive for their transactions.

By the way, I never said Ethereum would be replaced. This space does not work that way. I said Ethereum will remain as the place to go to for high-value transactions.

Congrats, you were upvoted from this account because you were in Top 25 engagers yesterday on LeoFinance .
You made a total of 13 comments and talked to 6 different authors .
Your rank is 16 .
For more details about this project please read here - link to announcement post
You can also delegate and get weekly payouts.

does it means that we need to wait until btc hit 60K/75K then wait it pull back to get a better ride to the top?

In short, yes, but there is no guarantee it plays out exactly like that. It could go slightly higher than that range or slightly lower. However, history says it should happen around that range and correct about 30% or so from peak to trough.

thanks for the explanation. Will definitely look into that kind of correction.

People are now looking even longer term with this price moments, ETH may likely have stronger hands as though BTC heading to 75 - 100k will attract a big sell in my opinion, but we never known, things may change drastically as though BTC and it's holders are full of surprises.

Yep, anything is possible. I am just basing my thoughts off of past trends/patterns and probabilities. It may go all the way to $100k before that 30% correction, though I doubt it.

Those are simply the price points that saw the highest on chain transactions as well as the most Exchange volume. Large volume areas tend to work as support areas as price (and people) tend to have memory when trading.

This was a very informative post, thanks for the info.

Thanks. Glad you found it interesting!

Can confirm for ETH at least, took mine out of the exchanges so that i can start trading on DEXs. With new stimulus money coming in, I think that correction will be closer to $75k.

I could see that as well. That is a lot of money coming out, and I would bet with crypto being so hot, a significant portion gets put in crypto...

Thanks for always giving us interesting information, now I really don't think BTC can retrace its usual 80%, I see it really hard.

It will retrace 80%, but not until the cycle has ended. Which will likely either be this Summer or in December of this year at a price several multiples of this.

Thanks for this reply

Great info, thanks for this! It's great to see consolidation for a while at curtain points along the journey, always hoping that becomes support down the road, but with that spike in on chain transactions it's definitely looking that way.

Yep, stair steps all the way up.

Governments had better treat crypto with kid gloves. I think it's starting to approach too big to fail category. I have no doubt some people's life savings are in crypto.

Yep I agree. The fact that very public billionaires are now in crypto means they can't just squash it. Michael Saylor and Elon Musk changed the game.

This is great news.
That way the volatility
effect is under the radar.
Eventually a drop will happen
but not to the point where it will
crash.
I can see $60k and by summer $100k
2021 is so green, what a balance within a year.

I think it will happen before then at least one more time, but we will see.