khaleelkazi (77)in LeoFinance • 2 months ago (edited) In the past 2 weeks, we've rolled out a bunch of new updates to the LeoFinance UI. As we get closer to the official release notes for the V2 Phase 2 update, I'll make some videos covering the various features and how to best utilize them.

In Discord chat today, @dalz and a few of us were talking about the new Auto Tweet feature. 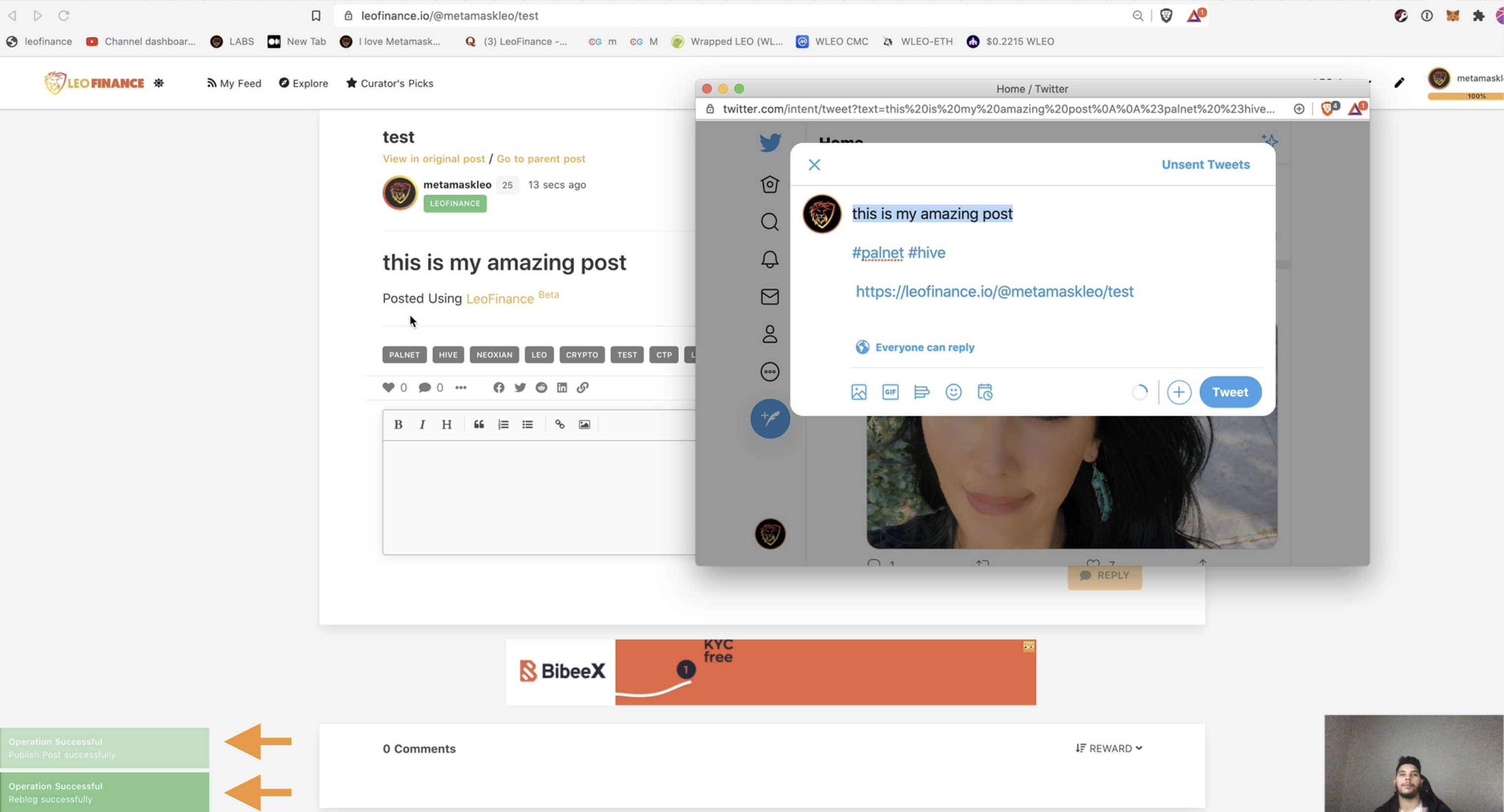 You can easily just hit Tweet once this dialog is prompted to automatically send it or you can add in a little more details/change the tag.

Auto Reblog is another feature we rolled out alongside the Auto Tweet functionality.

This one is more self-explanatory: it automatically reblogs your post on Hive so that it shows on your main blog feed on other sites like PeakD/Hive.blog. 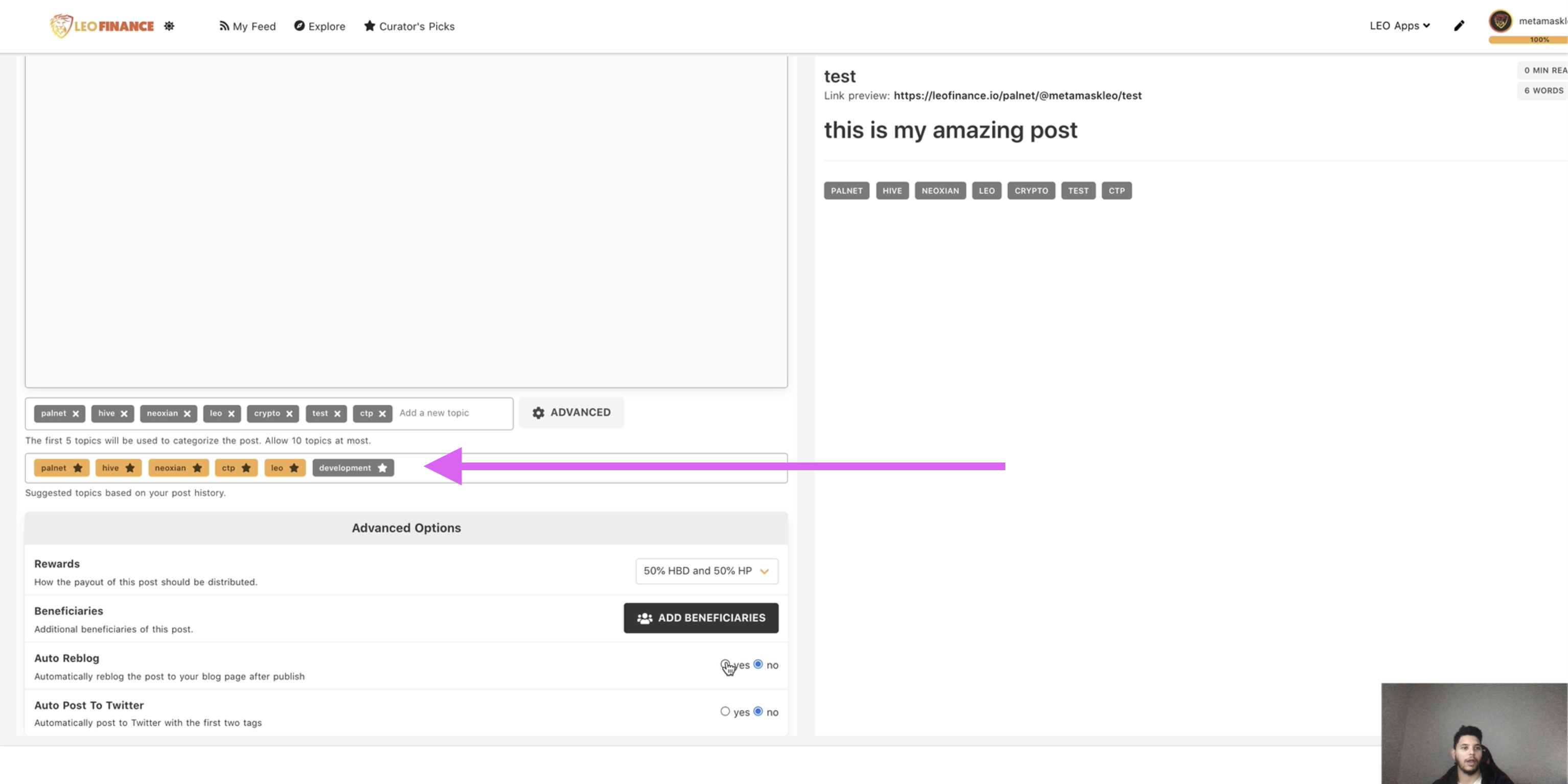 Hive Smart Tags is an awesome feature. It takes your recent posts and collects the 6 tags that you use most frequently. These tags are then displayed and can be added to your post with the click of a button.

Most authors on Hive/LeoFinance tend to use a handful of tags frequently on each of their posts. The Smart Tags feature will suggest these tags and make the posting process that much smoother.

Next time you find yourself over on https://leofinance.io, give these new features a try! The Auto Tweet feature especially gives users like @taskmaster4450 no more excuses to not be tweeting their leofinance.io posts over on Twitter! Now he and others can hit the publish button and then literally 1 more click to fire off a tweet with their content.

LeoFinance is a blockchain-based social media community for Crypto & Finance content creators. Our tokenized app allows users and creators to engage and share content on the blockchain while earning cryptocurrency rewards.

The BEST part about the smart tags is that I don't have to think about spelling 'leofinance' properly.. I seem to have a habit of writing 'leofinane' for some stupid reason.. lol.

lol just make sure you don't spell "leofinane" too much or it will be one of your smart tags.

I've been a victim of wrong spelling of tags many times and do miss out from earlier upvotes. The smart tagging is awesome.

I have used to post my blogs by using smart tags. It is a good technic and make me easier to add many tags.

I love the smart tags. And have been using them a lot. I will have to give the Twitter post a try too. That will really expand the reach and drive people to LeoFinance.

One thing: I heard that Twitter shadowbans tweets containing a link to a post on a Hive front end. I wonder if LeoFinance is one of them. I was tipped to tweet a reply to my own tweet that contains the link as a way to go around the shadowban. I used to share a lot of my posts on Twitter in the spring but I noticed that I stopped getting likes and responses to the from outsiders, so I guess the shadowban thing is true.

Have you noticed the shadowbanning yourself? If so, could the workaround be automated?

I haven't tried the auto tweet feature. I think I would rather create a more active tweet instead.

The smart tags comes in handy. I don't have to type tags multiple times.

Thanks for the new features.

i really like the fact that you guys pay attention to every detail as small as it can be... those details make the difference in my opinion! The smart tags idea is quite interesting, it's saves a little bit of time especially when i have finished a big ass post and i am a little bit tired of remembering or writing the tags. It's just a small ease of mind that i enjoy!

Any tool is helpful and this is a good one. It's good to have some help when it comes to tags. Thanks guys.

Great idea with the auto-post on Twitter. Keep making this site as easy to use as possible and we have no excuses as bloggers to be lazy :p.

The auto-share to twitter tool would really e helpful to me. I missed from sharing many of my posts to Twitter because I wanted to do it later. These are really great developments on the leofinance interface.

Thanks for these great additions to make the user experience more enjoyable. Indeed, you're fulfilling the promise of making leofinance.io a state-of-the-art blogging interface for internet users.

I love that auto tweet. It helps one save the stress of finding or starting another long process of tweeting again after uploading the post

the auto tweet is really great features, to be honest it was also a bit boring to proceed with the manual share.

The automatic tag detection system is also very convenient, since the tags are used most frequently.

congratulations! I also look forward to a personalized notification system on Leofinance 😁🙏

I am loving the smart tags as that's helped with some of the recurring ones and saves having to think of new ones unless they are relevant to the post!

Smart tag features is very usefull... you don't need to type the common tags now you has smart tags..... awesome...

These smart tags are very useful! Great work!
Cool to see there is a lot of development going on!
Is there a place where can suggestions for further improvements can be dropped?
And is there a kind of road map for GUI improvements?

this change that i came to know today from your video that is real very much nice using tag, so in this way we have no worry option about spelling related smart tag, and also no need to type again and again best, auto tweet that bring smart change in our mind just publish and get to twitter