Just when you thought the threat was over... BOOM! The shark terror returns for another bite! 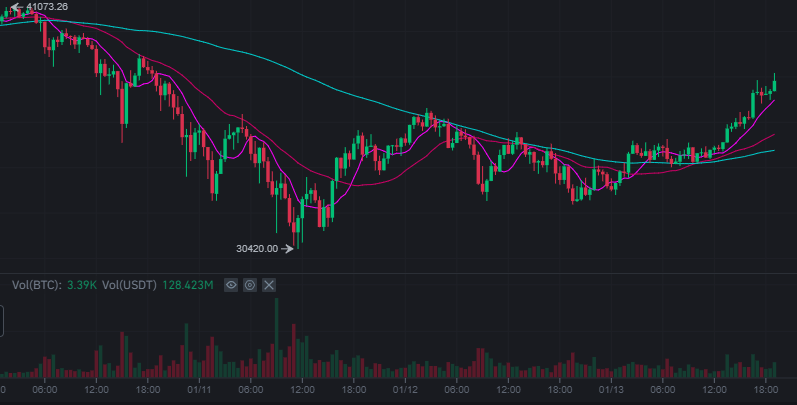 @edicted calls them the sharks, so I'll run with that as well. The sharks are the big ol' legacy money coming in to dominate the Bitcoin supply. They don't really seem to care about the big bubble. They are just chompin' down as they want, taking out the bears that try to make the price drop as they sell high and want to buy back in lower.

But the rest of us, at least most of us, aren't running with the bears. We're just looking at them run around trying to make us scared with their knarley teeth.

They want to create the FUD that triggers mass selling, while they would have sold higher and then bought up when it was lower. They want us to bite, but we ain't biting!

The sharks are biting though. Maybe they don't care about the bubble, or maybe they do and it's all part of some plan... I wonder what plan that is...?

What if... they just keep up above $30k, and try to make it go higher, baiting the bears like a fish. The bears see the ATH, or near that, and try to create a FUD selling frenzy... but no one else really buys into, at least not yet.

The sharks buy it all up, and just amass more of the BTC supply while the oldschool holders lose their supply, never really able to buy it up at the low low price of $20k or whatever they are trying to get it to.

How much pressure can these bears really apply? At some point, they will run out. I doubt they would gamble all their BTC in trying to force a bear market sell off just on the off-chance they can buy it all back cheaper and amass more later. That might back fire big time.

All I can say, is I don't know what the end result will be in a month, 3 months, or a year form now. But I do think BTC will eventually keep going higher. Maybe the bears will win out, create FUD, get the other holders to panic and sell off as they buy on the low end. Or maybe the sharks will just keep baiting them into selling off more and more as they buy it up and increase their holdings.

It's interesting to look at. BTC went back to $38k on Binance (the chart above). That's where I look at the trading, as I think it has the highest volume? Enjoy the ride. Hold or sell a bit, I don't think you can go too wrong there. Buying is a bit more risky. But what do I know. It's all guess work. I am not a legacy money bags making this market move even a millimeter lol.

Whaaa?
Congrats on making Trending though, I guess.

Am I worthy of the sanctity of trending?

Snap I'm a crypto influencer look at me go.
Creating new definitions and everything.

Hehe, at least the title made it worth your while ;)