Too Big To Fail?

muratkbesiroglu (78)in LeoFinance • 3 months ago 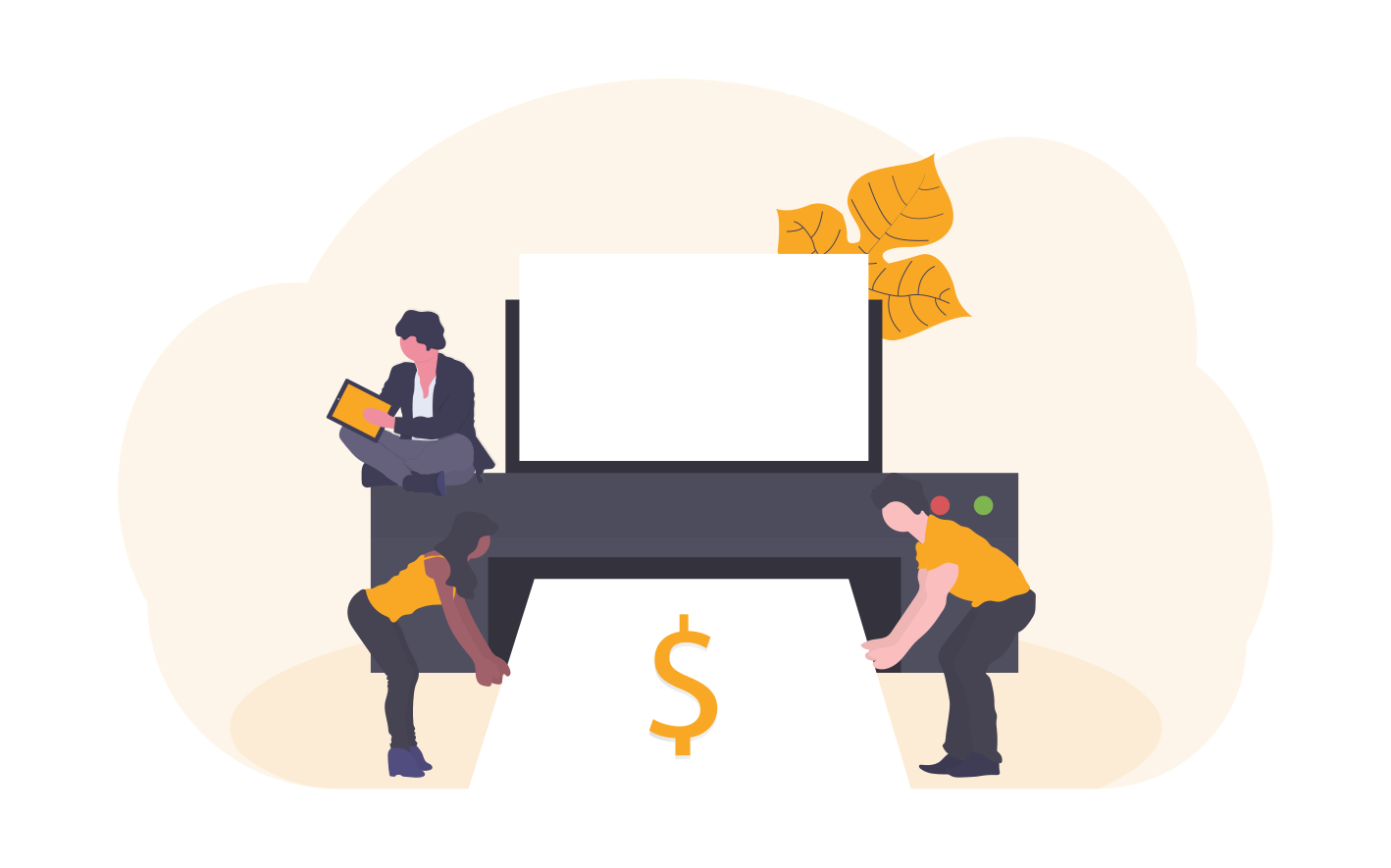 Since the collapse of Terra, stablecoins have remained a source of concern for the crypto market. The loss of the peg of USDD, issued by the Tron network, created stress in the market. Nowadays, Tether's status is again open to discussion. Yesterday there was a news on Coindesk that hedge fund traders are shorting USDT in anticipation of its value falling.

Tether's lack of transparency about reserves was also discussed before Terra's collapse. Tether has had problems with legal authorities since 2018. Last year, the US Commodity Futures Trading Commission fined Tether $41 million for misleading statements that USDT is 100% backed by USD.

Tether has made progress in transparency in recent months. Now, at least, we can see the distribution of USDT reserves by asset type in more detail. However, it would be better to see which companies the assets belong to and their rating values.

Tether has recently reduced the share of commercial papers in Tether USDT reserves. On the other hand, the billions of dollars Tether paid in the days after Terra's collapse can also be seen as an operational success. The chart below shows that Tether's total market value has shrunk by $17 billion after May 10. 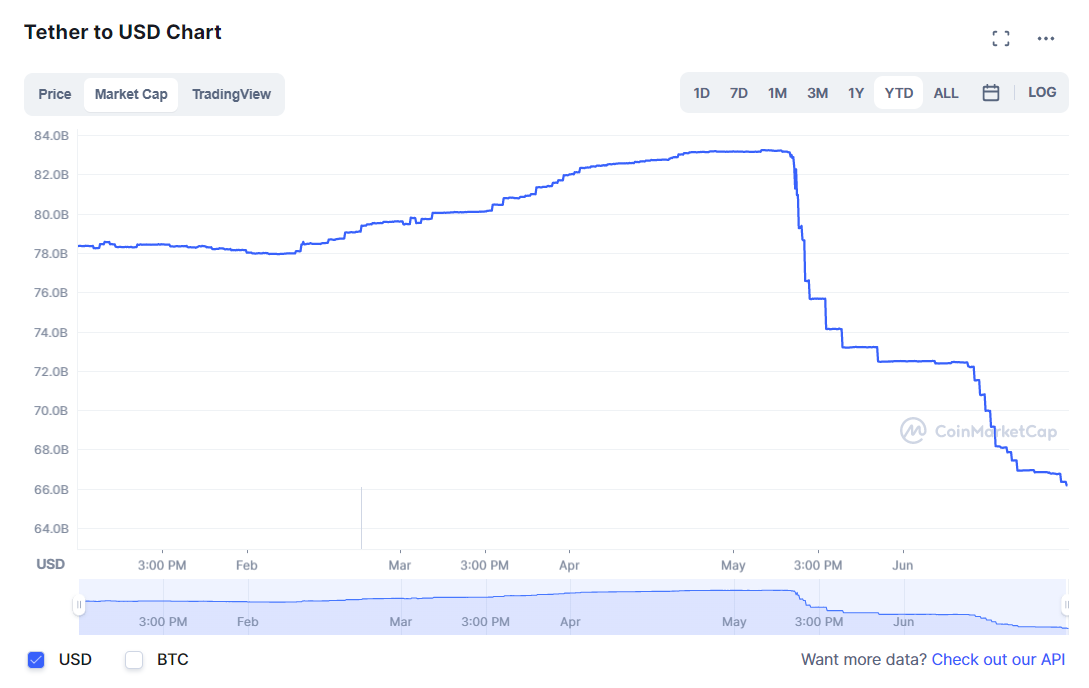 If this process has a winner, it is Circle and its stablecoin USDC. USDC is seen as a safe haven by investors in these turbulent days of crypto.

According to the latest report published on June 24, all USDC reserves consist of cash and short-term US Treasury debt instruments. The fact that USDC's financial statements are audited annually by independent institutions and that USDC is subject to SEC audits are also factors that increase confidence. USDC's market cap has been growing since May 10. This shows that USDC has gained a significant portion of Tether's positions. 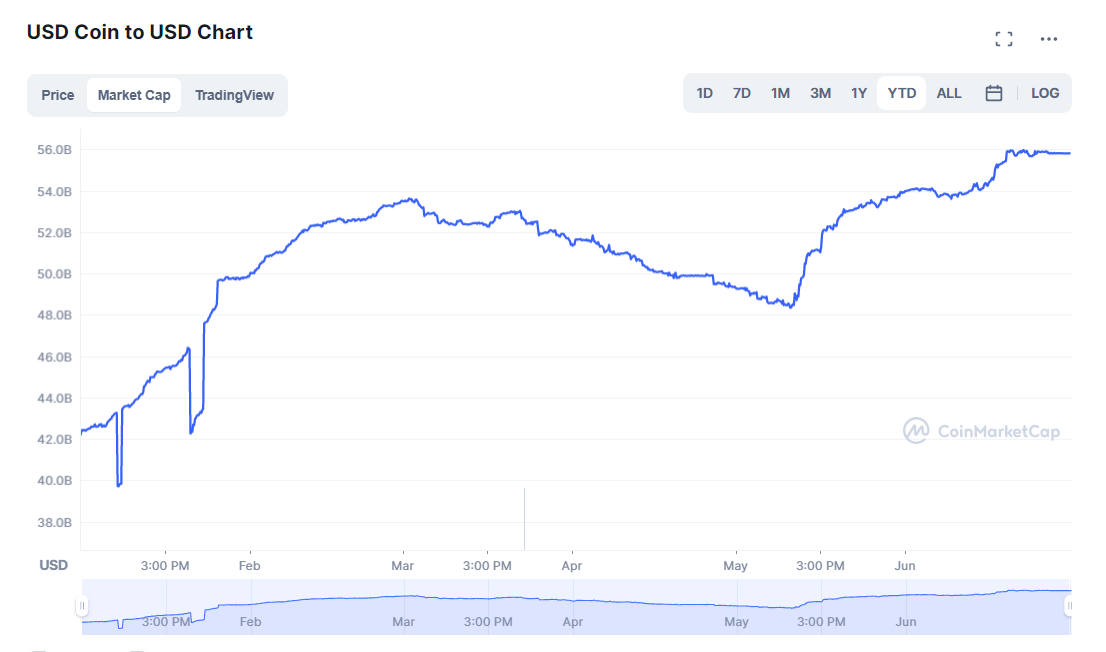 Although its market cap has decreased by $17 billion in the last two months, Tether is still the stable coin with the largest market capitalization. And addressing the concerns created around Tether is essential for the crypto market as a whole. It is necessary to consider that Tether is used extensively for trading on exchanges in countries other than the USA. On the other hand, USDT assumes a central function on the DEFI side.

It is possible to interpret the financial situation of Tether from different perspectives. A capital adequacy ratio of 15% is more than sufficient for banking. This ratio expresses the balance of the capital owned by banks to their financial liabilities. We can estimate that Tether's reserves are incomparably high at such a rate.

On the other hand, we know that Tether is not a bank and the price volatility in the crypto market is higher than in the traditional markets. If Tether had kept its reserves in cash and cash-like assets in line with its initial promise, there would have been no cause for concern. We can speculate that rising interest rates and the tendency to avoid risk in the market adversely affected Tether's reserves. Will this cause a problem for Tether to fulfill its obligations? If market conditions deteriorate even more, things can become riskier.

Even if the concerns about Tether are exaggerated, I believe this issue should be resolved. The successful operation of Tether made a significant contribution to the adoption of the stablecoin concept. It is not difficult to guess that the Tether operation is profitable under normal conditions. Establishing a partnership that will allow for a capital injection without further damage to the Tether brand may be a viable solution.

I hope a permanent solution to the Tether issue is being negotiated behind closed doors because the rumor networks woven around Tether harm the entire crypto ecosystem.

On the other hand, it is possible to solve the problem experienced by Tether by spreading over time. Stablecoins with more transparent reserves such as USDC and BUSD will increase their market share over time. However, I do not think that it would be a rational attitude to take risks in this regard.

I hope a permanent solution to the Tether issue is being negotiated behind closed doors because the rumor networks woven around Tether harm the entire crypto ecosystem.

Same thoughts here. We need to find ways to coexist without them hurting crypto.

worse than USDT is that I have more liquidity, the way is to take risk for those who trade daily

Wow, I was really believing that USDT was backed completely by the dollar...
You seem to know a lot about USDC. Do you know if the USDC that goes over Go-Chain is the same USDC than the one over Smart Chain? And yuo mention shortly BUSD. Is there a proof that BUSD is completely backed by the USD?
!PIZZA !CTP