Just How Big a Deal is El Salvador Adopting Bitcoin?

nealmcspadden (73)in LeoFinance • 3 months ago

A little while ago I tweeted this 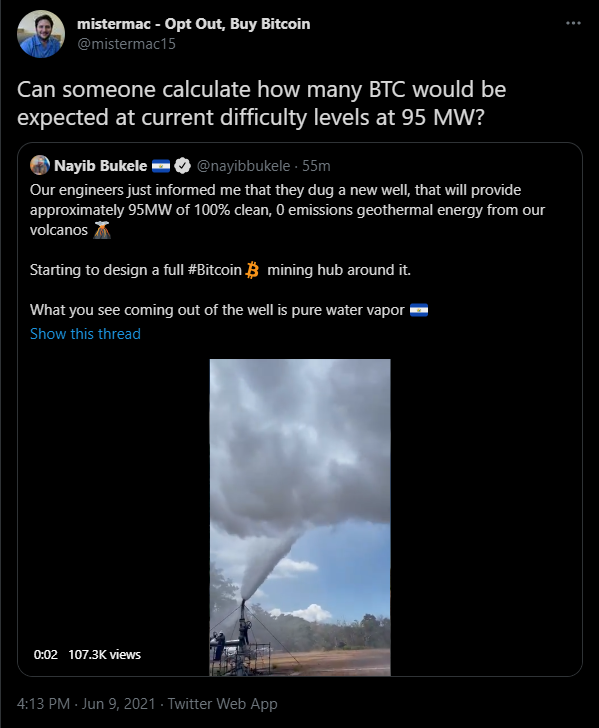 So I asked on the LeoFinance Discord channel and got an answer from @edicted. 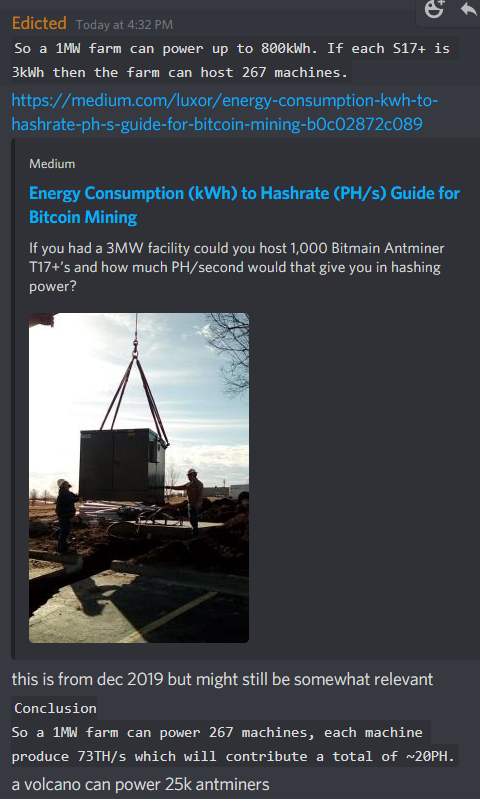 The numbers from this article are old, so production from S17+s will probably be a bit lower. But current mining machines are likely more efficient. So maybe somewhat balances out.

But let's go with the 11 million dollars a month of revenue as a starting point.

According to ye olde wiki, GDP is about 25 billion a year

132 million compared to 25 billion is 0.5%. So this one plant could increase annual production by half a percent. This one plant. One.

Obviously there ain't no such thing as a free lunch. There are costs in building the geothermal plant. There are costs in maintenance. There is competition in the hashing network. Let's say that all reduces net production by... oh... 90%. We go from 0.5% of GDP for the whole country to 0.05% of GDP - again, for the whole country out of this one operation.

Now I'll be the first to tell you I know nothing about El Salvador's politics or culture. But I can do simple math and see that this is a giant opportunity for them if they don't fuck it up.

It is easier if you don't have your own currency to begin with. But somebody has to give it a go. Good for them. I hope it works out well.

Yeah, since they are dollarized already they are used to not controlling their own money.

The risk for them is mainly political. The USgov might start to play hardball.

What a lot of money and also I do not know anything about El Salvador's politics and culture but I hope beyond hope that everyday people will benefit. I am an optimist!

Are you assuming they sell everything they mine at current prices? They could just hold it for while instead of selling right away, fund their operation cost with debt and wait for their minned assets to grow in value. That would make it even more impactful

Yeah, I'm just looking at the impact at current prices. If they hodl and employ their crypto assets productively it could be a huge multiplier.

It's a really interesting development.

Yeah, having 3 BTC is one of the lowest investment-based residencies I've heard of.

At least until BTC m00ns.

They adopt Bitcoin and will mine it with geotermals?, Bukele is winning a lot of credit to my eyes lately. Good stuff, I hope that all these news aren't steam for their electors.

Seems to be real

At first I was going to say that many MW is laughable but when you break it down like that a cool few million for a mining rig is actually legit!

Wow. That really is a giant opportunity. At this rate the narrative might change from fear of China "taking over the world" to Latin/Central America doing it with their willingness to adopt crypto. 😱

It's pretty much akin to discovering an unlimited gold or oil deposit in the country. Something that has turned poor countries into rich countries in the past...