revisesociology (75)in LeoFinance • 5 days ago (edited)

A number of high profile crypto-commentators such as Plan B, have predicted Bitcoin to hit at least $100K before the middle of the next decade, and I'm inclined to agree....

Just 1% of the world's wealth invested into crypto would = $100K Bitcoin @60% market dominance.

This, I think, is one of the most powerful arguments for Bitcoin hitting $100K at some point (I wouldn't want to predict when!), as 1% is a relatively small hedge.

According to Credit Suisse, current global wealth stands at $360 Trillion.

Currently, hardly any of this is stored as cryptocurrency: 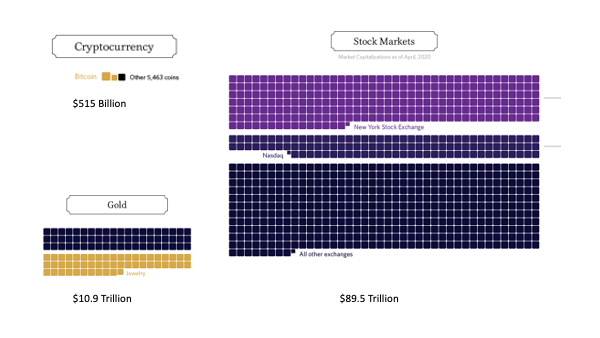 Or it's probably clearer here: 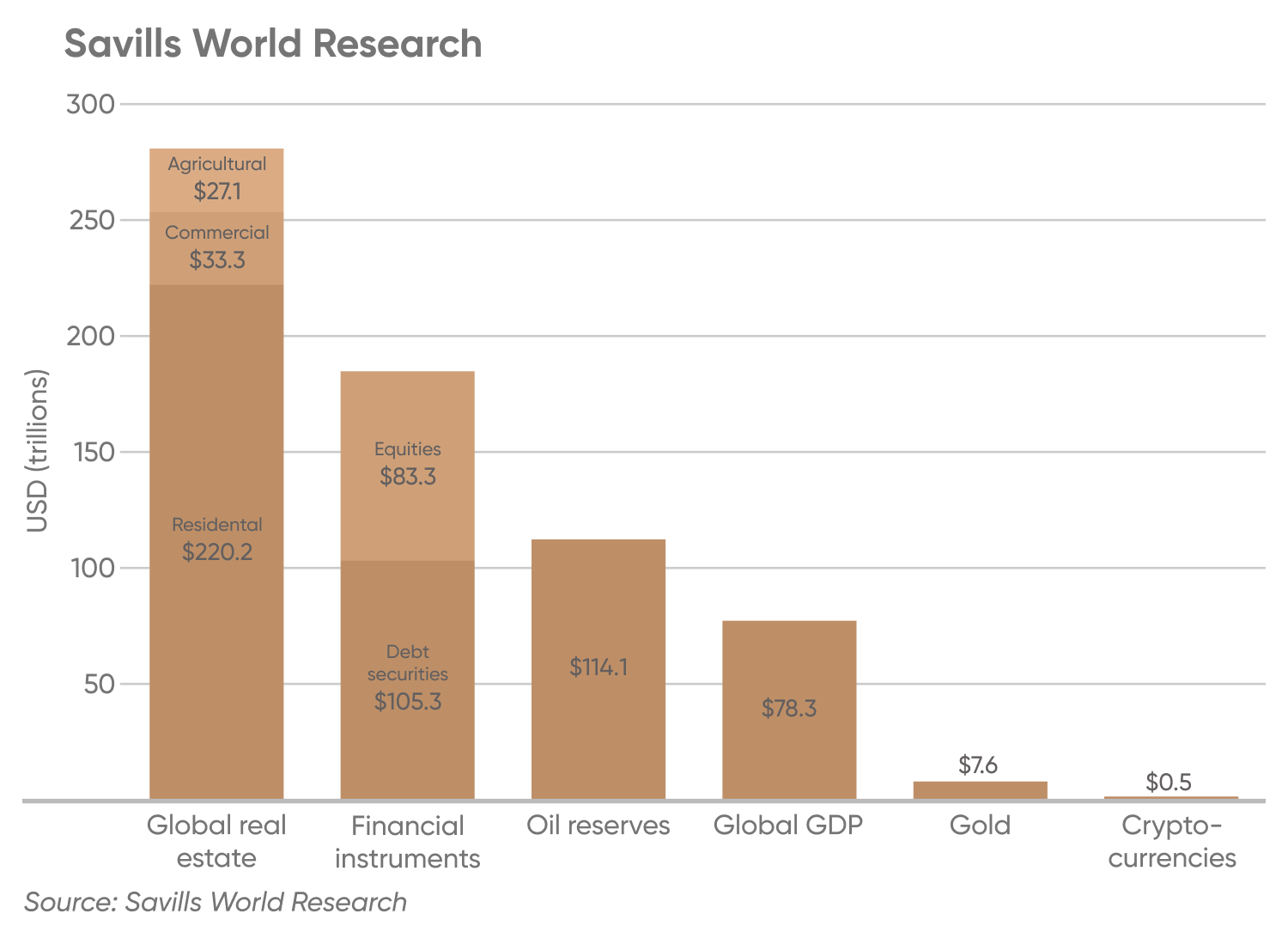 If just 1% of that $360 trillion of global wealth were transferred over into cryptocurrency, then we'd end up with a total crypto market cap of £3.6 trillion.

If we divide that by 21 million (the total number of BTC to be minted) then we end up with a BTC price of around $170K.

But given there are other cryptos, let's multiply that by 60% to allow for some of the alts to develop and maintain their market share, which gives us a Bitcoin Price of just over $100K.

I did a spread sheet! With super cool E numbers and everything!

It really wouldn't take much to boost the price of BTC to $100K or more.

$100K BTC will only be the case IF 1% of global wealth gets invested into crypto and 60% of that goes to BTC - it might well be that a combination of other what are now called 'alt's but might in the future be called 'once were alt' coins which soak up who knows 90%, 95% of potential investment....

And we all know that's a possibility, otherwise we wouldn't all be having so much fun having a punt on this and that hopefully to be once were alt coins!

100k? Well I'm sure this is in contention i see this as a potential reason as to why people will chose to store value in BTC, it's all working out.
Ahhh a spreadsheet hahaha you'll always add that you're the spreadsheet guy

EVERYONE loves a spreadsheet!

I like to show that same visualization when showing how small of an industry crypto really is at the moment, and how huge the current financial system is. The amount of derivatives is insane! Also, it breaks the bubble of the "it isn't real money" argument for crypto when already 93% of narrow money is non-physical. Also, that global debt looks a bit frightening.

Bitcoin really doesn't need much of that money thrown at to go to 100k. Just a few institutions buying in recently and the price is going up. I imagine even more will follow. I mean PayPal is allowing crypto payments now and companies are using it as a hedge. Better that individuals get in too before big money flows in!

I love that derivatives bit of the visualization - that's the real 'funny money' - and you're right it probably is a better comparison, I was going for the low hanging fruit that requires no explanation!

'what are derivatives'? (forgets about crypto)

And fair point about the BIG money, although maybe if people do miss out early on, that's a hope for Hive - when they start looking around for cheep coins to buy that aren't $100K!

Very nice! I have posted related material, so am familiar with the numbers and projections. Your explanation is 100% in line with my figures.

This is all anyone needs to know about crypto. (The initial doubt that everyone had/has at the outset - which is when each person decides to get involved - is whether it will survive or not. Once you've seen 10 years of real-time "testing", that question starts to be answered affirmatively on a societal level, and that's when use and price jump to projected values.) If you believe that there will be mass adoption, then these are the numbers to refer to when making projections!

The 'other thing' that is key is picking winners. There will be big winners, and big losers as well. This is where the work must be done. I recommend diversifying by trying to 'pick' at least 5 projects.

Thanks for the reminder!

Well I've obviously gone for LEO, Hive and Splinterlands - I also spent almost a grand on Exodegame, all part of the same chain I know but increasingly they seem different.

ETH, LTC, BAT, RUNE and MANA are my next largest holdings.

BTC is still no 1 though for me ATM, but I think LEO will take that no 1 spot at some point the way it's going.

I do find myself resisting buying alts atm.

But what utility does it have? Why should it be Bitcoin that goes stratospheric when there are more functional alternatives? Just curious to know. I understand it is treated more as a store of value. People don't want to spend it as it could be worth more next week. Can't say I understand the markets, but it all seems a bit tulips to me, as that is as someone who has a nice stake in Hive. I see it as more useful.

The ability to store value has great utility. Storing value is one of the basic functions of money, the others being measure of value and medium of exchange.

Consumer price inflation is quite low at the moment - despite all the money printing. All that excess money printed goes to the financial markets where it mostly stays. I believe it's because there is so much value being created by the accelerating gains from technological development. So, while you could treat the major fiat currencies as stable stores of value, which they are from a CPI point of view, you are missing out on huge gains by parking your value in them.

So I guess it's just demand for BTC that drives up the price as people want to move their funds their. Then it becomes more valuable because it is valuable :) Just seems a waste of the potential of crypto to me, but what do I know? I wonder if Satoshi has all this in mind.

It feels wasteful to you because it seems that for you the two most important functions of money are medium of exchange and measure of value, in that order. You don't seem to focus on the store of value aspect of it as much.

And yes, there is a speculative self-reinforcing FOMO going on in BTC and probably will be going far into the future. That's how BTC can become a store of value.

It's interesting to think what Satoshi thought (whether Satoshi was an individual or a group). In the Bitcoin white paper he talks about an electronic cash system, i.e. a currency.

There are such incredible similarities between gold and crypto, I doubt he/ they didn't plan at least some of this deliberately - 21 million BTC but down to 8 decimals, scarce enough but not too scarce, a declining mining rate with increasing difficulty, right down to the 'mythology' - gold has that too, so does BTC.

It all may be coincidence of course, but if it is design it's even more clever than just the pure cryptography.

Oh yes, whoever designed Bitcoin had a firm understanding of market psychology and game theory, that's for sure.

And Bitcoin strikes me as at least as reasonable a choice as gold or stocks in tech companies for 'storing value'.

Stocks in tech companies are really not stores of value rather than investments. Gold is relatively stable and is thus a store of value. A lump of gold does nothing except look pretty and is scarce/expensive to mine. Bitcoin is superior to gold in that it is vastly more transferable. Storing it is as easy as memorizing a 12-word seed phrase. Learn a string of words and you can smuggle billions of dollars across any border or past any security controls. That alone is worth a lot.

I guess I should have added that as a qualifier, or been clearer that's IF BTC maintains its dominance, but I dunno, I have a feeling it well maintain something like 40-60% - it's foundational, after all.

It's a better store of value than Hive. But hive is more useful in every other way.

Certainly I think $100K/ BTC's worth of total crypto capitalisation if you get my drift!

I guess speculation gives it a lot of value, along with the max supply of 21 million, being the first crypto and blockcain and already considered as a store of value by many around the world. It doesn't do anything real world though...well, at least not much. My take is that ETH has way more use cases than BTC has, but the greyscales and others prefer BTC and this time it's institutional money that dictate the price.

You know the more I get into thinking about it, the more I'm a BTC fan - It's got that mystique - when I look at ETH I just think HIVE is better.

I still have a fair bit of ETH though - it does have that cross-chain thing going on, although RUNE could blow that out of the water.

I am into diversification, but I I'm leaning more and more towards MORE Bitcoin, not 100% more, but certainly more than 50% of what I'll buy from now on.

i see bitcoin maximalism in here :)

I've heard the concept but never really explored that crowd - I don't think I can be classified as one - not when my combined stake in Hive is larger than BTC!

Money can come out of nowhere, it doesn't really need to come from other assets. Put that 1% on top of the out of nowhere money and you'll have a $300,000 BTC. I love PLanB's stock to flow, it's so on point.

I was being conservative, what can I say!

@revisesociology,
Interesting & yep due to it's less market supply, the demand might be at that price level!
$tangent

Yeah crypto still have lot of market to cover. $50 LEO will just make our day.