Below is my Personal Hive stats review for July 2020. These stats are approximate as this post has been written gradually over a few days (it's far too punishing to do it all at once!). 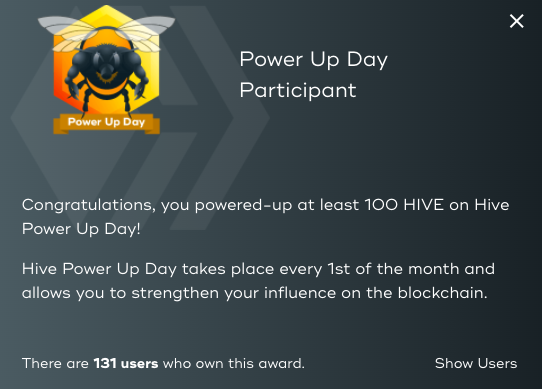 Along with an extreme minority of users, I Powered Up >100 Hive for HPUD day.

I've decided I'm going to track my 'progress' in Hive, not dollars. I like the idea of thinking in Hive!

I use mainly the following sources to get these stats: I'm quite humbled by the author rewards TBH, and thankful for all the upvotes!

I would really like to see an improvement in my curation returns, I want to increase so it's at least 50% of my author rewards.

I've bought in approximately 1800 Hive - most of that was still from Steem PowerDowns, you know that last little bit you hadn't PDd initially because of it being delegated out! Most of that's gone now, so I expect a slow down in the increase of my HP from August!

I'm quite happy with that, especially the curation return. Note that 16K LP brings me in 400 LEO, 36K active Hive brings me in less than that in Hive!

I've been buying in LEO gradually because it's less inflationary than Hive, and it's got a much better curation return ATM. And I like the platform too of course!

I made Champions 1 for the first time, and then again for the second time - 4800 and something points, both occasions. but generally pretty crap rewards.

I find the game a little dull TBH - My deck isn't maxed and in C1 you just get too many Yodins and/ or maxed decks with pounding magic or sneak and OMFG - YAWWWNNN - I lose because someones spent twice as much money on their deck as I have.

I've bought in a few more cards from the Beta sales this year, a maxed gold dragon being my favourite purchase, I think that was this month, it may have even been in May, time is flying!

So I managed 38 posts, which is in line with my efforts to write more for LEO - I've been quite content upping my writing slightly, it feels like a good time to write, and I've sorted out my writing strategy into different themes, or realy consolidated it, it was already sorted, as i outlined here!

With around 450 comments I'm happy with that - It's one of the first things I do in the morning, and after lunch and dinner, is check my feed and drop in comments as appropriate, and reply, naturally!

There's a lot I find discouraging:

I can sort of understand why people are gradually disappearing.

Having said that, I still have faith that the fiat world is flawed, that it will shortly go through a severe contraction (I doubt it will collapse), people will find BTC en masse, and then greed, ego and herd-mentality will see them flocking to Hive in the future, on the back of a wider crypto-moon, without that, we're going nowhere.

It's just a matter of time, and I'm sure Hive will do something!

It's a shame to read your final comments as I think we all hoped there would be so much momentum when the hardfork happened. I hope we are not looking at another missed opportunity.

For me I just wanted to learn how to program blockchain and Hive is fantastic for that as it provides all the tools and free trades on Hive Engine. So I went ahead and merged my two passions of music and coding to create Rising Star. I don't really spend much time interacting on Hive though. I spend my time on Discord instead as it's just a better platform for speedy interaction.

Let's hope you are wrong and someone is really doing something amazing about the onboarding process. I was even thinking of writing my own dapp that guides non-crypto people through the whole process. I started with this guide and it wouldn't be that much work to make it interactive.

Thank you for the ENGAGE!

Hey cheers, I think you're doing a great job with Rising Star btw, I know a lot of people that play it, and I think it's very much part of Hive's future!

I'm a bit gamed out on Hive otherwise I'd try it myself, but I feel a bit too spread out as it is!

I have to go with the stats when making a judgement, which don't look good TBH!

Then again things can change quickly, and things could pick up rapidly, when all's said and done I've been buying Hive and I haven't cancelled my lower limit orders.

Thank you. I am just having fun to be honest!

Let's see what the future holds. Easy enough to move Rising Star to another chain if Hive just turns into the old Steem! I am sure there will be plenty of competitors entering the market!

I find the game a little dull TBH

So do I, playing it is more a chore these days. I don't know why I bother. I prefer Rising Star now, it does have some originality.

I've got an uncomfortable feeling that some Whales would rather see Hive stuck at 25 cents and maintain their power in a small, stagnant pond, rather than see mass adoption.

I'm not one of these, but I'm no whale either. Stuff to talk about next month if you are heading north.

Hey @slobberchops, here is a little bit of BEER from @risingstargame for you. Enjoy it!

There's more Hive being Powered Down and finding its way to the exchanges - this may be people getting ready to speculate on an expected alt coin bump.

This is true when you look at the numbers, from pure power up, vs power down.
I have been doing stats on this, in this manner as well. But I have noted, that HIVE comes as power up rewards, that is also powered up hive, that users dont look at it.

If hive was rewarded all liquid, then comparing power up vs power down would make sense. Now as we are comparing its almost always in favor of power downs, because half of it started as powered up in the first place.

I hope to find time this month a do a real power up vs power down post.

Fair point, that's an interesting way of looking at it!

I would really like to see an improvement in my curation returns, I want to increase so it's at least 50% of my author rewards.

Over time as more and more people compete for author rewards, curation may well become the key factor to earning, at least for those with decent stake.

hey mate we have a surprise 4 u That one we made dedicated to your help, while we asked about artifacts)

I think yer right, I'm sort of depending on it!

There may well come a point when it makes sense for me to delegate a large chunk to one of the curation initiatives.

You've been writing stuff that sits in LEO for ages, about time you started collecting :)

A few hundred quid a month and we're going nowhere, would be nice to sample what that would look like should we be going somewhere!

A few hundred quid a month

That's just us and a few hundred other people.

Overall, the platform isn't growing at a fast enough rate for individuals to sustain that income, ATM!

That's what I mean by 'going nowhere'.

I've decided I'm going to track my 'progress' in Hive, not dollars.

I've always been doing this. However, I do track my HP in dollars and satoshi on my general crypto page because I don't count pending rewards and other stuff there.

It seems like you are doing great. To be honest I got bored of a lot of it. I realized I can make a lot more money playing the stock markets and trading crypto compared to blogging. I like it better, too.

Thankfully I like blogging, I really don't enjoy trading, either stocks or crypto, more than happy to pay into a fund and let someone else take care of that for me, and just chuck in a few crazy limit buys and sells and forget about them.

Each to their own!

Don't get me wrong, I also like blogging too. However, I don't think the rewards are comparable. I find the ROI on researching investments is far more than on posting on Hive. In my case balance is key. Recently I've been busy, but I really like writing my blog and would probably continue to do it even if my rewards were practically nil.

It's slow progress for Hive and a terrible time in the world, but comparing blockchain adoption to adoption of earlier technologies, we're right on track. I liked this post by @naillon11 which contains the best summary I've seen of how-to-join-hive. I'm looking forward to a summer break and a busy autumn.

Glad you're enjoying the writing :)

Seizure material, I guess I'd better put in a disclaimer!

Hey @revisesociology, here is a little bit of BEER from @risingstargame for you. Enjoy it!

Aye, @exodegame development is indeed taking a lot longer than what everybody had hoped for.

I still fully trust in what elindos envisioned for the game and the behind the scenes progress is quite impressive, but hell would I love to finally play with my own cards...

"I've got an uncomfortable feeling that some Whales would rather see Hive stuck at 25 cents and maintain their power in a small, stagnant pond, rather than see mass adoption."

... you are not alone in wondering about what some of these bigger stakes are actually thinking / doing to add value to our Hive blockchain. I guess we can just try to focus on the good people who are consistently doing that and hope over time the "imbalance" is profitably addressed by a much larger "middle class." They're not all bad, having actually met some of the larger stakeholders/ witnesses, many of them are solid! I think there is enough 'up there' to balance out the more unstable elements.

Down here, we're of little consequence - unless you fancy powering up 500K HP?!

I think that's the minimum you need for people to start 'courting you' in times of crises.