During the 19th century the Queen of England, Victoria, instituted a set of conventions that give information for guidance, instructions, or orders for a course of procedure, and guide the views and behaviors of the monarch of England. Those Queen's Virtues are carried forward in the 21st century by England's longest-reigning monarch, Queen Elizabeth II.

A statuesque figure of the virtue Victory is depicted in the reverse design of the 2021 1 oz Silver Queens Virtues Victory Coins. The figure of Victory bears powerful wings on her back and holds a palm branch in her left hand. Victory is the first of the six Queens Virtues to feature in this series and acts as a signal of the end of the conflict and a celebration of peace. 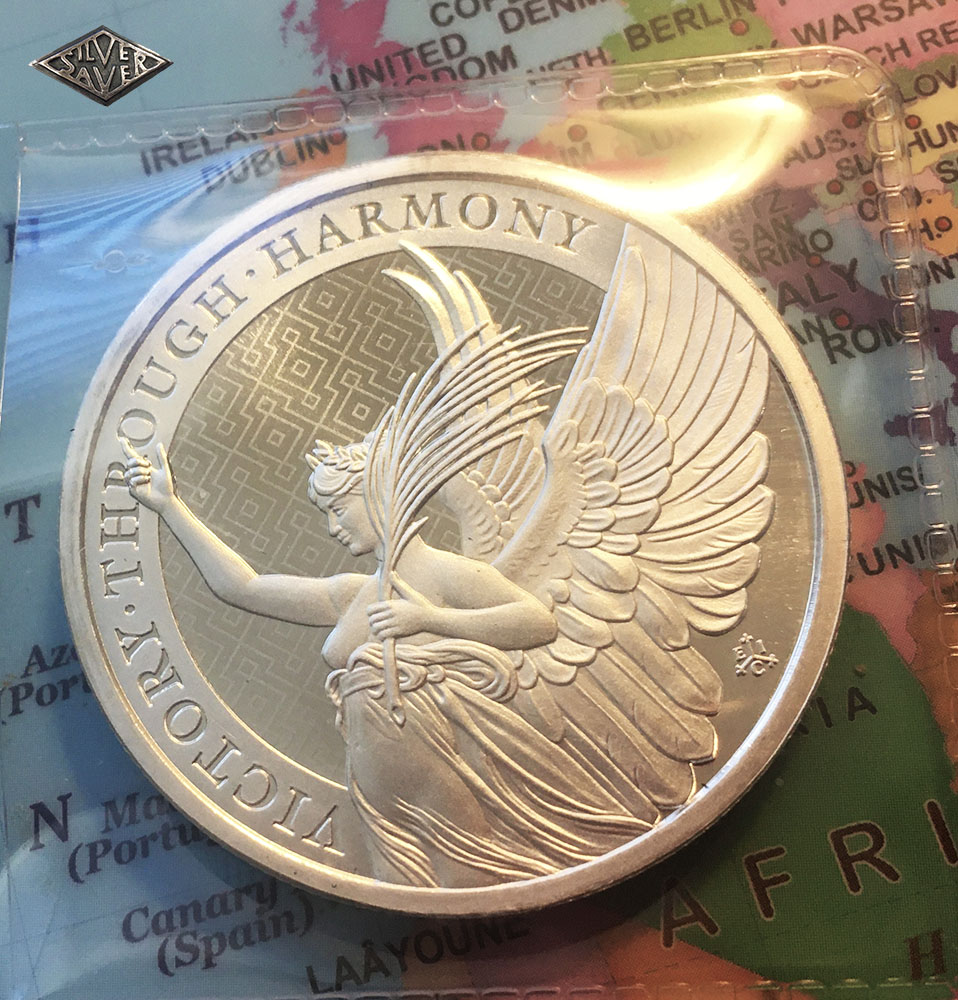 Queen Elizabeth II is found on the obverse of 2021 St. Helena Silver Queens Virtues Victory Coins. The design element features the Raphael Maklouf depiction of Elizabeth II that was used on the obverse of British currency from 1985 to 1997. In this portrait, the timeless, regal depiction of the Queen features the George IV State Diadem Crown on her head.
Source: JM Bullion 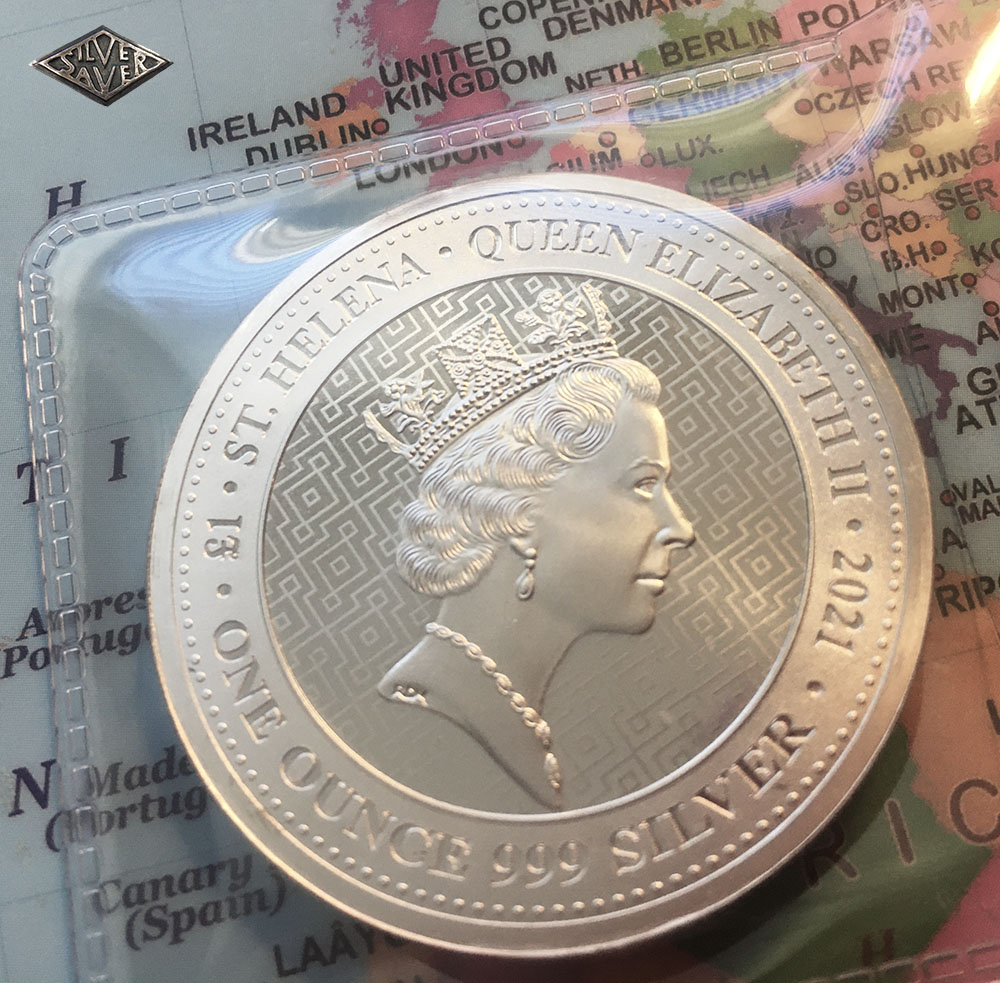 This is a new 6-series coin by the issuing country, St. Helena.

Saint Helena is a British Overseas Territory located in the South Atlantic Ocean. It consists of a remote volcanic tropical island lying some 1,950 kilometers (1,210 mi) west of the coast of southwestern Africa, and 4,000 kilometers (2,500 mi) east of Rio de Janeiro on the South American coast.

Thanks for showing the addition to the stack, @silversaver888. Yes, another fine Silver Coin.

I will show you the silver additions to the stack, maybe some gold too. Hopefully, it encourages others to stack.

Thank you, @cve3, for your support, and for following my progress!

The coin is beautiful indeed! It is the first year release of six. I wonder how the next one will look?

Have a wonderful day, @brittandjosie!

The Angel of Independence, or Victory in another light! A fresh lovely depiction on this bullion coin of the tiny Island of St Helena. I think of all the different forms of this popular allegory from various coins of different counties but until I have this coin in my hand I can't begin to describe it's beauty in detail.
I'm still waiting for my 2021 Maple Leafs! Gosh, I am so behind the times.

Be patient with your 2021 Maples. It will come. There must be a real shortage. These were ordered in December and delivered end of January. It will come!

Fingers getting itchy already Kerris?
Got to let them mine it out of the ground first, Lol!
I'll let you know when I get the phone call so RELAX!

Just beautiful @silversaver888, this is the first I have seen of this coin!
I will check out Saint Helena Territory looks like an awesome series!😍😍😀

I like the reverse and the obverse of this coin.
It is beautiful, @silvertop!

Very much so my friend, a very nice post @silversaver888 Have a wonderful week!😍😍😀

That is a very regal and nicely done coin. I look forward to seeing the rest in the series (I am presuming you plan to acquire them?). Thanks for sharing sis, @silversaver888. Have a lovely week!🌸🤗😘💞

Yes, I have started the series.. I guess I will have to continue getting them. Or maybe not, hehehe.
I love sharing with you sis, @elizabethbit.

Thank, sis; I like seeing things I don't have. Take care and have a wonderful week!

They tend to do okay, you're right about that @stokjockey!
But actually... this was available last December, hehehe!

What a gorgeous chunk of metal

Yeah!
And you can say for all of the silver and gold!!!

I didn't even know this place existed. The world is full of things you don't know.

Yup, and we'll never get to know all of them!

In 1815, the British government selected Saint Helena as the place of exile for Napoleon Bonaparte following his escape from Elba; the initial location of his forced exile.[25] He was taken to the island in October 1815. Napoleon stayed at the Briars pavilion on the grounds of the Balcombe family's home until his permanent residence at Longwood House was completed in December 1815. He died there on 5 May 1821.

Hopefully learning about the coins is helping with that!

What a striking coin! I recently read about these islands and how they are days away by ship from the nearest continent. It's great that the ideas if Queen Victoria remain preserved into the present.

This is the island where Napoleon Bonaparte was exiled.
Yes, I hear Elizabeth is a stickler to guides!

I appreciate the visit, @evernoticethat!

Wow... This has to be one of my favorite 😍 such a beautiful piece.
Love it.
Thank you for sharing and have a fantastic sunday. 🤗🌹❤️

It is their version of Winged Victory, similar to the Mexican Libertad, at the top of Victoria Memorial.
The virtue is "Victory through Harmony"... it makes a lot of sense.
Have a beautiful Sunday, sis @saffisara 😍🤗❤️

Your collection dear friend @ silversaver888 is admirable, I appreciate that you show us your passion every day.
I love visiting you, I always learn something new. And that's very good
I wish you a prosperous week. That you enjoy it a lot

Thank you @jlufer!
Have a great week, my friend!

Hahaha!!!
She is a longest-living monarch!!! Yeah, long live her!!! Do you think Charles will ever be king!

He would be better of spending his time on Hive than hoping for that.

Hey @silversaver888, here is a little bit of BEER from @pixresteemer for you. Enjoy it!

Congratulations @silversaver888! You have completed the following achievement on the Hive blockchain and have been rewarded with new badge(s) :

You're welcome @silversaver888, Nice vibe! We hope you're having a happy buzzy week 😊😊😊

Yes, it's been busy!