summertooth (72)in LeoFinance • 6 months ago (edited)

The first time I saw a black Rhodium plated coin I knew I had to add one to the collection, but at the time the coins available were either not my style or too expensive...until now.

I read a post by @silverd510 and in it he mentioned Money Metals Exchange, a website I don't often use (or check) so I thought I'd browse a bit and am I glad I did! 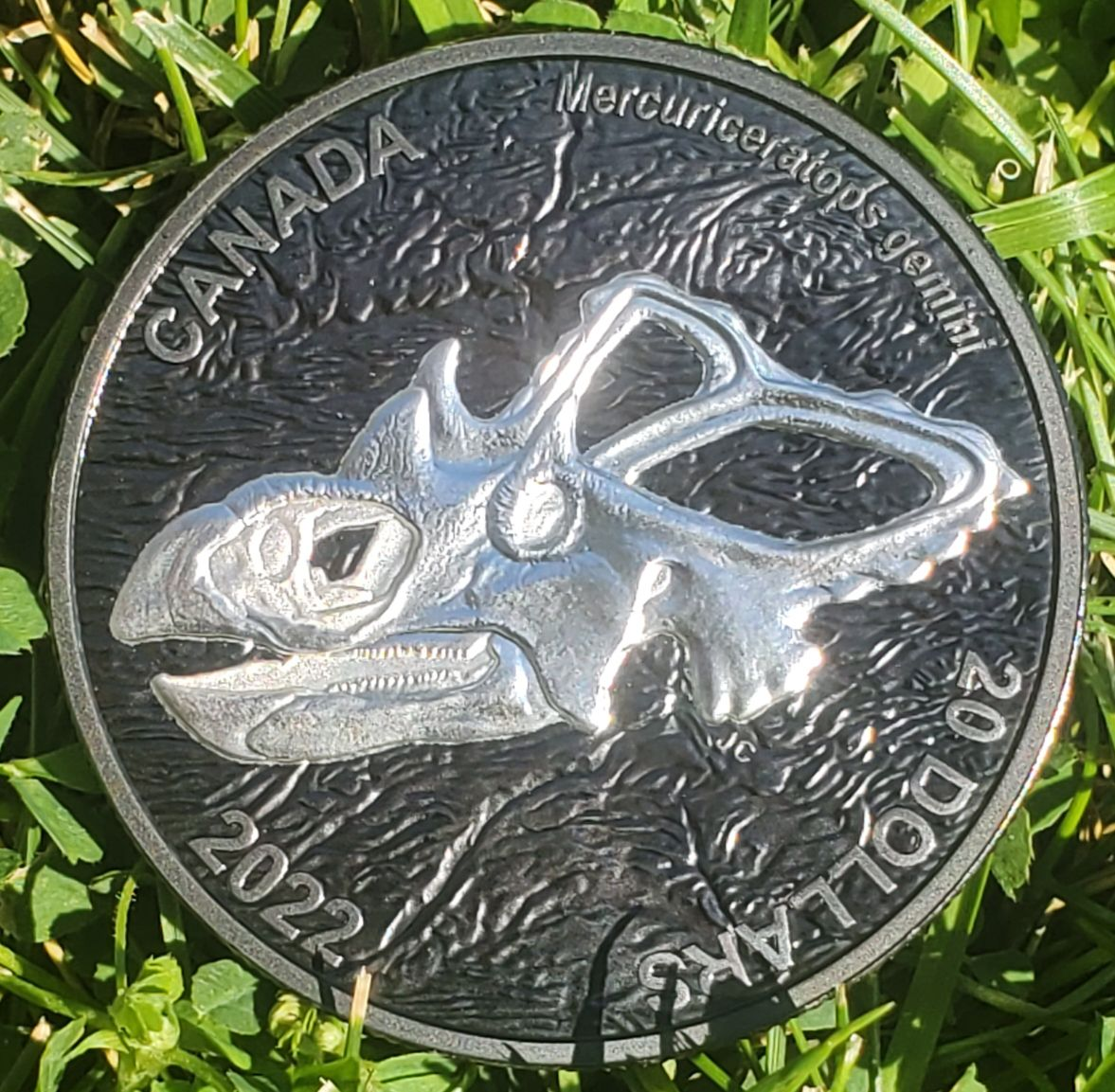 Rhodium is a type of platinum that is rare, very hard, and corrosion resistant. Given this metal’s higher melting point and durability, jewelers typically use rhodium as a plating, rather than a solid metal, to make gold or silver jewelry extra bright and shiny.

Black rhodium is, in fact, just one of many colors of rhodium. In its natural state, rhodium is silver-white and is typically plated onto white gold to give it a brighter, more luminous finish. By binding ink to rhodium, however, dark colors can be created that vary from light gray to black.

The coating is super cool and matte so I was extra careful not to touch it with bare hands. Instead I popped it out of it's plastic case directly onto the grass :o 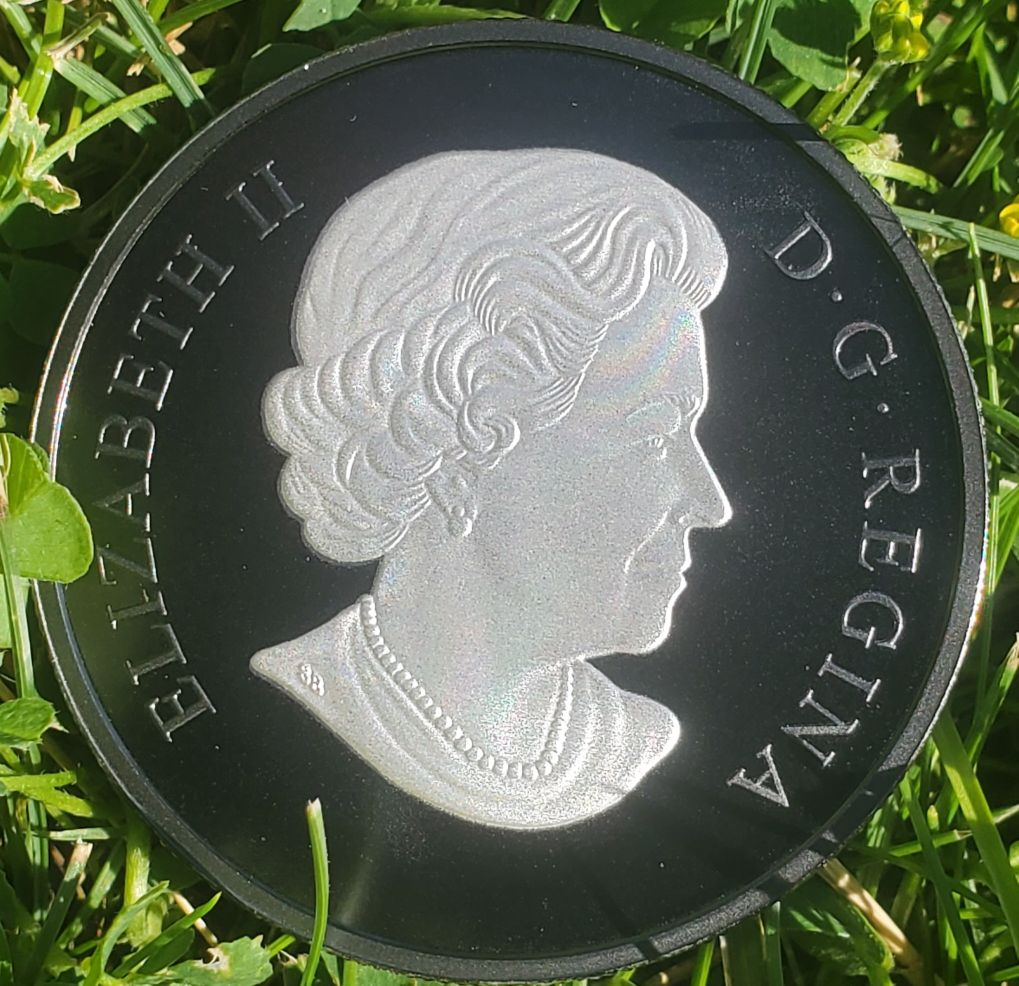 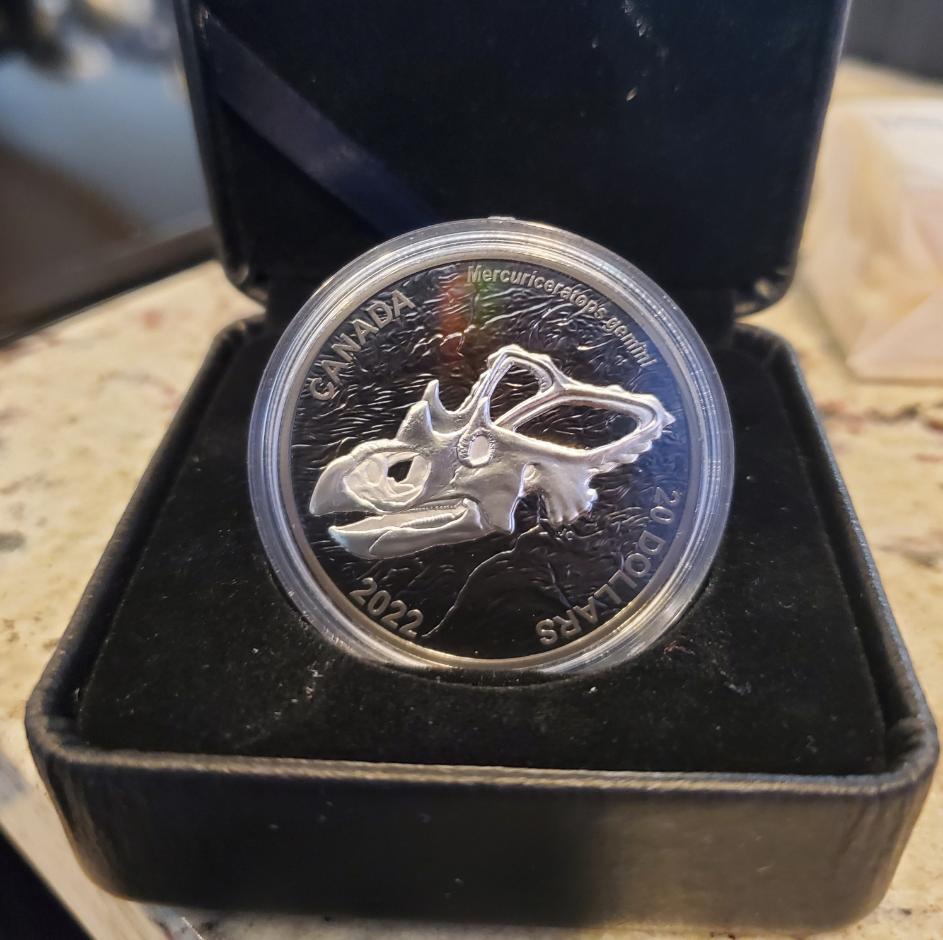 Found this at the bottom of the listing on mint.ca

Its unusual frill may look scary, but it likely helped Mercuriceratops to attract a mate. Unveiled in 2014, this six-metre-long herbivore was described from near-identical skull fragments of two individuals—one recovered from Dinosaur Provincial Park in Alberta and the other from the Judith River Formation in Montana (United States)—hence the species name, gemini (“twin” in Latin). The genus name, Mercuriceratops, means “Mercury’s hornedface.” It was named after Mercury, the Roman messenger to the gods, who is often depicted with wings on his helmet.

Do you have any black rhodium plated coins or jewelry?

That sounds awesome @summertooth, very interesting how they add ink to Rhodium to produce the black color!!🤗
Will this fingerprint/mark if touched?
Very good that it popped out of it's plastic case directly onto the grass!
Now.....
you know the drill...just leave your GPS coordinates, and Silvertop will make sure it's back in that plastic holder Lol!!!🤣
Nice to read your post take care!!!

Ink, your wheelhouse :)
and don't worry, it's back in it's plastic sheath forever!

Hope all is well my friend, nice to hear from you.

We are doing well my friend!😊I hope you are staying cool, it’s been a hot summer!😎

I like it......a LOT! Quite a nice find! Perhaps you drop that on the trail for me to find? Thanks for sharing @summertooth, and I hope you've been having an awesome summer so far! Take care!💜🤗

Well, the thing is you'll have to find the others first, when you put those together you will find a map to this one ;)

Nice to hear from you EB, hope all is well up there and you got ST splitting and stackin that wood for the coming months.

Hey @summertooth ! All is well, and ST has all of it stacked already! Fall can't come soon enough to suit me as I am done with heat and humidity! Give me some clean, crisp air with a hint of wood smoke in it! Take care and have a wonderful week!🤗💜

Your my hero Ferris…….

The Rhodium finish sure makes this coin more photogenic.

So much easier to photograph than the shiny.

Black Rhodium coin is nice. It look so unique and excellent for stacking !

Wow, I just found out about Rhodium like 2 days ago, apparently it’s 20 times rarer than gold and costs about 10 times more

Interesting, I had no idea it was that rare, I guess that's why they only coat with it and don't mint 1oz rhodium coins :D

Nice write up ! I got this coin too a fairly high premium on it but it's really nice

Oh cool! Did you get the first release in the series? I looked after I saw this one but price is way to high for me to add now.

Thats a nice looking coin right there, I can see why you added it, !LUV !PIZZA

Yeah, I actually picked up two, if the price doubles I sell one and mine is #free
!LUV

Dinosaur pure coin looks pretty tempting to own as a coin