The Massively Expanding Wealth Of Cryptocurrency

The crypto world got something it was waiting for.

Uniswap announced the develop of the UNI token. This is a governance token that will be distributed to those who provided liquidity to certain pools. It is a way to generate even a greater return for those who are involved with the largest decentralized exchange.

This is falling under the category of a governance token. By holding the token, users will find certain benefits that are associated with the platform. It is a long term proposition since the time period for the inflation rate to kick in is 4 years.

Nevertheless, this is a massive opportunity. Those who provided liquidity in the past are now eligible for an airdrop of up to 400 tokens. The UNI is already valued at $3, meaning it is a $1,200 drop. This is the same dollar amount, ironically, that the United States Congress gave every taxpaying American adult earlier in the year.

Anyone who is involved in cryptocurrency to any great degree is facing a changing of his or her mindset. We all have reference points of knowledge and this is what we base our outlook upon. It is also what determines what we feel is possible and, what is not.

Cryptocurrency is teaching us the old rules no longer apply. For example, when it comes to rate of return, 20% annually is long considered to be outstanding. Warren Buffett acquired the title of "World's Greatest Investor" for his running of Bershire Hathaway. He was able to generate 20% returns for more than a half century.

This is in contrast to interest rates which are at historic lows. We now see savings accounts paying around 1%. This established a level in people's minds that provide a reference. Essentially, this is the range that is considered normal.

Just take a look at Bitcoin. Here is the annual return over a 4 year period. Take into consideration that one year had a more than 70% decline. 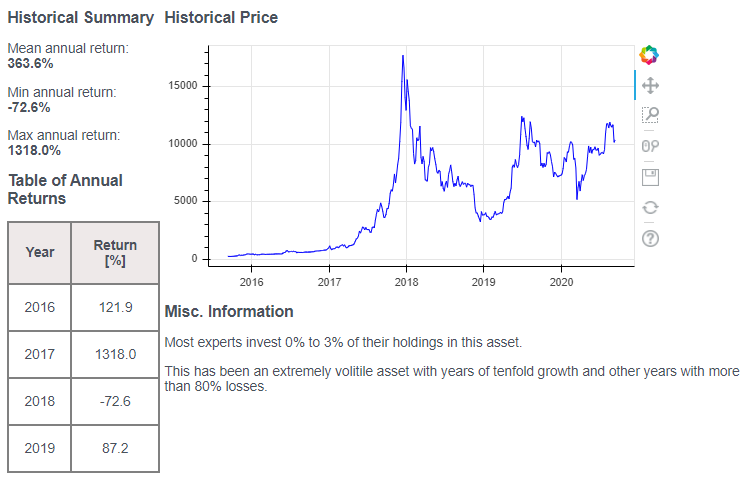 In spite of that, the mean return is over 360%, a year. This dwarfs the numbers that existing system is accustomed to. Of course, Bitcoin and Warren Buffett are not comparable since the former is only around a little more than a decade. Nevertheless, the return is absolutely fabulous over that time. 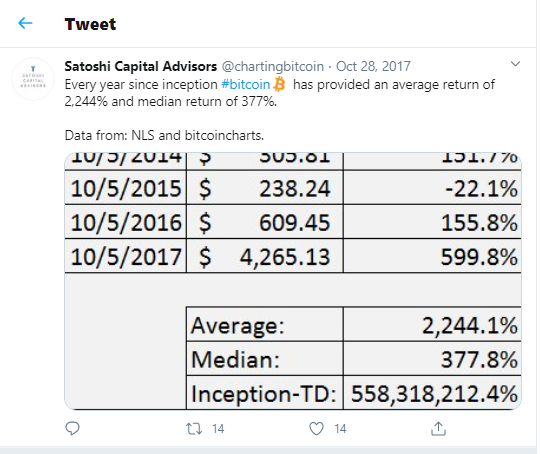 Will this continue in the world of crypto? Only time will tell but with all that is taking place, opportunities are everywhere. For this reason, it might be best to raise our sights a bit higher.

It Can Happen To You

Many feel that this is only for the select few or the lucky. The truth is we are seeing it all over the place. While it might be a phase, it is something that anyone can take advantage of. In fact, it is even possible for those with little to no money.

Remember Steemhunt? This was a platform that many got involved with on the Steem blockchain. It was one of the first projects within that system that paid out in their own token as a return for delegating SP to their cause. This was then, in turn, used to reward those who posted and commented on the platform.

Through delegation as well as efforts, many were able to amass tens of thousands of tokens. There were a number who even got into the hundreds of thousands.

A few months ago, this token was trading at roughly .002. Yesterday, @oldtimer put up a post that tells another story. Those with 20,000 or 30,000 tokens are sitting in a very nice position. Of course, this story might not be over. Who knows what heights this token can reach.

The point is that we cannot close our minds to the possibility that something we are holding moves 100x, or even 1000x. It is happening in many different areas. Sure, most of the moves are pumps that will not last. The projects are iffy at best, so tread cautiously.

However, there are some projects that are building for the long-term. Their ascension is warranted although volatility is going to be the norm. A project like Uniswap might be onto something as it keeps developing and expanding. Naturally, we have to be mindful of what else is taking place since it is open source software.

It is easy to get caught up in the astronomical returns of 10,000%. However, keep in mind that a 10x return is, in percentages, 900%. If one is able to find a few of them, portfolios can change quickly.

This is the era we are in. Hopefully many are taking the proper steps to try and take advantage of this. With opportunities being so prevalent, at least in the short term, financial situations can be altered very quickly.

At the same time, underneath all the mania are technologies that are developing which will have enormous use cases in the future. Watching the development and expansion helps us determine what has some staying power. Over time, as the system grows, these are the projects that could benefit long term.

Put all this together and we can see how massive amounts of wealth will be generated over the next half decade. It is up to us to decide whether we will be a part of it or not.

The opportunities are there for all of us.

Just to be onboard with the right tokens!! Come on baby!!! So much going on. Thx for aiming to help keep us infomed Task 😊✌

when you invest in the beginning of each year?

I just got helluva a shock. My paltry 1004 Hunt tokens I sent to Metamask are currently now worth 94USD!! Luckily, I couldn't sell them when you posted last time as I didn't have any Eth to pay for the transactions. Think I will leave them a little while longer.
Hope you're keeping safe and sane Tasky :-)

check the uniswap site, if you even tried a transaction once you can get 400 UNI which is around 3500 USD now

The hardest decision is always which coins/tokens pick for investing. Picking some from the top 10 (per market cap) seems reasonable yet less profitable. I miss the times where we had only a bunch of coins that could be taken seriously. Now, there are so many options.

It would wonderful for Hive to launch a native AMM for it’s tokens like LEO.

Liquidity could be incentivized by a % of of Hive rewards pool or for that matter any Hive token rewards pool.

Man, wouldn't it be nice to have been like a tester in the platform , with a bunch of accounts that interacted with UNI.

This proves that the possibilities for tokenization is endless, I think with the right amount of money one can begin to plan a future of where it's possible to generate returns for a long period of time.
Cheers!