toofasteddie (73)in LeoFinance • 2 months ago

July has been for me the most rewarding month since my departure here on HIVE(STEEM) 4 years ago.
Obviously I have gotten a lot of curation rewards coming from the "Bug" as a "side-effect" of the HF25 deployment during the first week of life but then, I also realized that my curation performance has improved also by a lot...mostly because I used to interact normally with my commentators and engaged authors, not only by following the conversation but also by upvoting on comments that were not well-paid before the HF.

As usual, we are approaching to the end of the month and so, I have prepared the update of my progression in terms of curation and Author rewards. 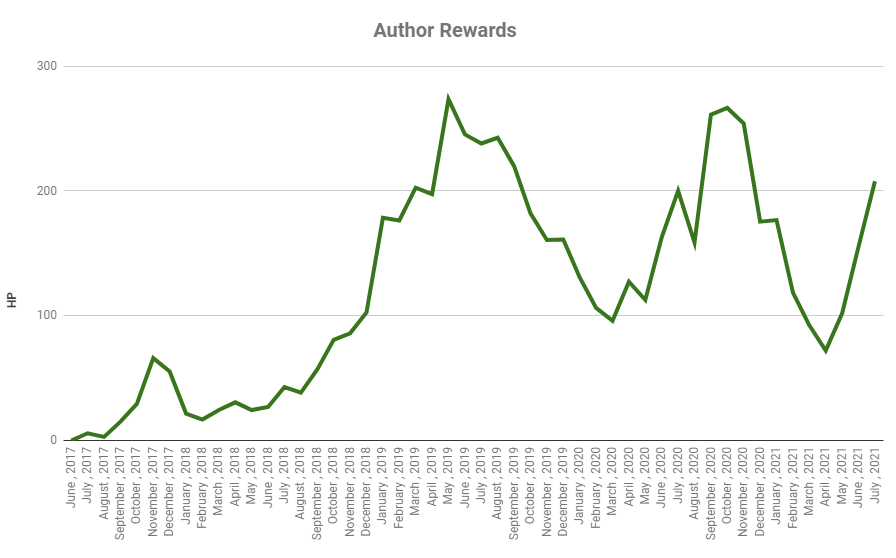 Reaching 207 HP only in Author rewards indicates good signals regarding the implementation of the new measures from the HF25. Accounts are not trying anymore to be the first on upvoting "quality" content since the upvoting window has practically disappeared. Also, accounts are upvoting more "organically"in my opinion and so, when upvoting, they are no guided by the amount of money that a post or comment has already done but for the content itself IMO.

This is my Monthly Curator rewards chart: 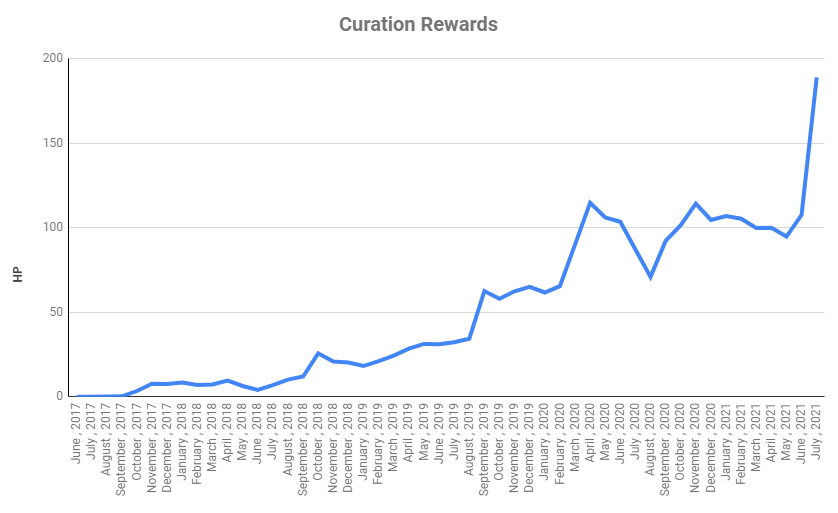 Simply "espectacular", 188 HP Hive Power obtained from curation which is an increase of 75% in comparison with the previous month.
Obviously, as I said in the preamble, most of the curation is due to the 1st week Bug coming from the HF25 deployment but, in any case, if I am only counting the last week of curation, I have managed to get 31 HP a week or, 124 HP a month which is, anyway, higher than the usual Curation rewards (normally around 100 HP)

The ROI on curation has also increased obviously and, consequently, the calculations provide me with the following counts:

Overall picture of the HP earned on July is... 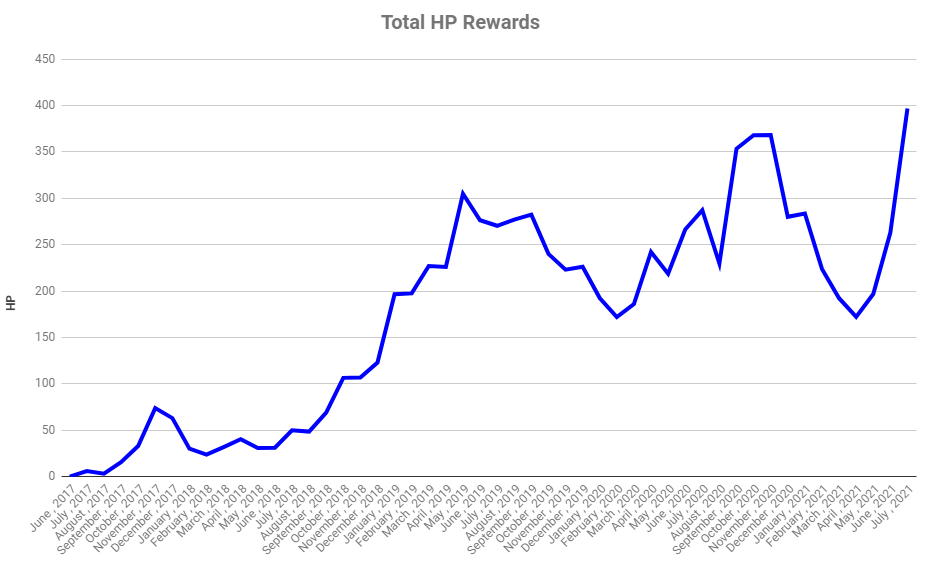 Compounding both previous charts I get a total of 396 HIVE POWER a month, which is my ATH so far an corresponds to roughly 178 USD of free-extra income staked in my account only in HIVE POWER..., not counting of course the liquid rewards that has been similar.

My total HIVE POWER has increased 384 HP in total, meaning that, although I had to powerdown a little of my incomes for personal reasons, nothing harming, my account is growing steadily.

The recent pump of HIVE in the market is just indicating the potential of this blockchain if one works and compounds consistently. I just only hope that the current uptrend of the market will impact positively on HIVE finally. This numbers could easily double or triple in terms of USD incomes in the short-mid term.

Don't bother the reason for the huge rewards, but enjoy it! Nice progress this month.

I probably got a lot less curation rewards, but you'll read that one of the coming days in my own report ;)

And then you even didn't add the value of the hive related coins, which you also do earn!
!BEER to celebrate the record breaking month!

Yep, that's another story...difficult to measure accurately but my estimation is around 500 Hive more
!LUV

$0.00
Reply
[-]
poshtoken (71) 2 months ago
The rewards earned on this comment will go directly to the person sharing the post on Twitter as long as they are registered with @poshtoken. Sign up at https://hiveposh.com.
$0.00
Reply
[-]
beerlover (64) 2 months ago

Hey @toofasteddie, here is a little bit of BEER from @fullcoverbetting for you. Enjoy it!

What site or app did you use for these charts? Never seen those before.