It is interesting to see the that the userbase of the Leofinance community is gradually increasing over the last three days. As at 23rd September, 2020, when wLEO was launched, these were the community statistics according to Peakd Leofinance dashbaord as denoted in Image (1) in the combined screenshot above:

Today, I again visited the Leofinance community dashboard to see how the information on the launch of wLEO has impacted on the userbase of LeoFinance. Unarguably, there has been an appreciating involvement in wLEO liquidity provision on Uniswap as shown in the image below. However, it is crucial to investigate how much "new" users are actually joining us over the last three days. In today's community update, this growth was captured.

Not to steal the thunder of our LeoFinance UI update - which is a major breakthrough on its own - but the WLEO - ETH pool broke $200,000 USD yesterday. WLEO was also recently listed on Blockfolio and currently has an application pending with several coin aggregators like Coingecko, CMC and Coinpaprika. 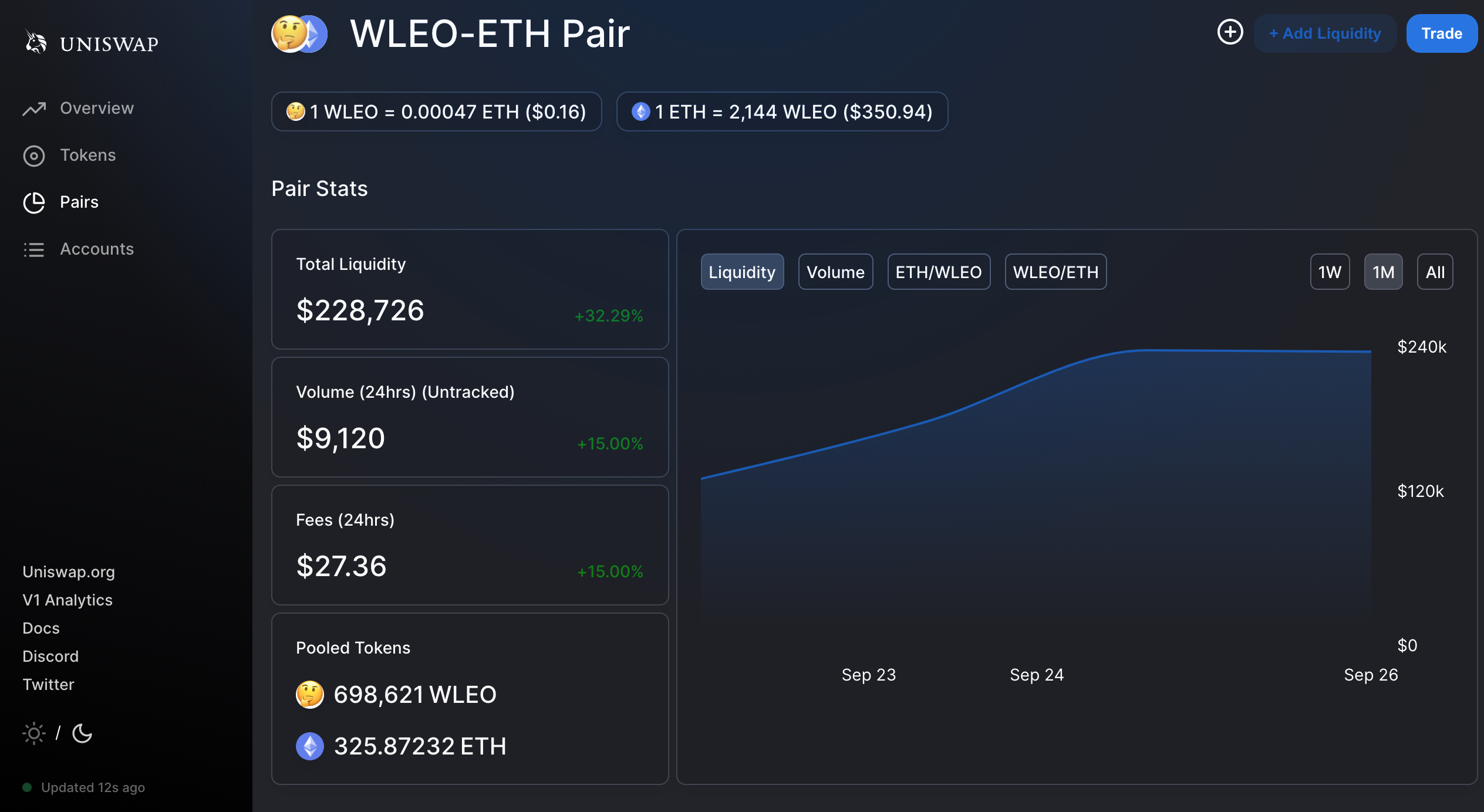 Looking back at the banner image of the post, the screenshot image marked (2) shows some level of growth in user related statistics of the community as follows:

With the above, we can say that there is some level of user growth in the Leofinance ecosystem though not as expected with the growing health of the LEO and wLEO tokens.

The leofinance.io website analysis on simpleanalytics shows a sharp decline in activity on the website days after the wLEO launch. One could argue that many headed to Uniswap to provide liquidity, however, I think that the pump in LEO price would have warranted more posts in the community in a bid to earn some more tokens to join share in the joy. I hope there could be a more technical defense for that occurrence. 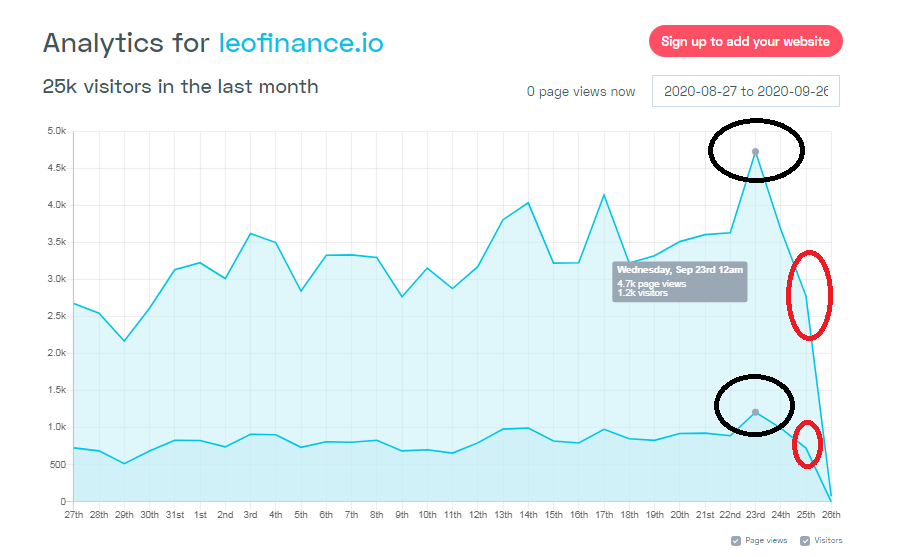 I had noted in this post in agreement with @nealmcspadden and @taskmaster4450 that heading towards the $2 and $37 value for LEo requires so much work in onboarding new users and keeping them active in the community.

A careful follow and understanding of the discussions on the future value of LEO was hinged on userbase. At this point we need the masses to join the Leofinance ecosystem. This may not be investors though we need investors who would want to push in some $10,000 and more into LEO.

Even when the users would not buy LEO tokens, their increased activity on the leofinance website would certainly increase the accrued ad revenue which would increase the volume of the token to bought off the market for burning.

Can LeoFinance Community think of a Referral System?

We cannot playdown on the import of referral system on a community such as leofinance. At this time, I think the referral strategy could be the most effective tool to boost the userbase and keep the users active on this website. I'm aware of the possibility of abuse, yet, there could be some level of regulations that can shape things up. here are my few suggestions on a referral system check:

We need users and passionate ones at that. This is how we can quickly grow the Userbase of the Leofinance community to increase our ad revenue as well. This would be feasible when there is a boost in activity on the leofinance ecosystems.

We're heading to the Moon with LEO!

Earn LEO + HIVE rewards by creating crypto/finance-related content in our PeakD community or directly from our hive-based interface at leofinance.io or LeoFinance Beta

I like your judicious use of the word Regulated.... If we get so many people come into the leofinance community, it would boast the community popularity and we will also have many other people rewarding others.

Yes, it must be regulated to prevented abuse. If referral systems are adopted for LEO, I expect even more constraints.

It would be nice to have a referral system for LeoFinance to reward members for promoting the platform.

Looking forward for a communication on this regard from the team. LEO is ready to rocket.

Even with a ref system you still need to provide resource credits to the user to use the HIVE chain which ads a layer of complexity that holds back a lot of dapps. Until dapps can access the resource credit market and pool RCs for their users, a referral system is dead on arrival or too costly to be worth it

HIVE is still in its formative years. I hope that a RC market would be up soon when things level up probably after this hardfork. Besides, it could be cool to have a sort of that on the second layer.

I agree layer 2 on boarding is the way to go more hands make for lighter work! It’s the main reason I haven’t launched a dapp the user acquisition on HIVE isn’t worth it

It is nice to see that the Leo are growing a lot, well this the way to bring the masses to hive.

This is just the beginning of the real stuff. A good time to buy-in is now!

Yeah! its a great way to draw users and grow some tangible attention to the community.

yes the bitcoin myk token on hive now has about 3200 affiliate marketeers and nearly 6000 low level kyc registered users. So i think with our affiliate dashboard we're on the road to mass adoption and becoming a usable currency. i think the mistake made though with bitcoin myk is that people think of it as a get rich gambling coin whereas it's a more practical useful product that's creating a stable currency. so the growth is longer and you probably wont get rich but you may end up in the future with a good return on your investment and that's the direction i feel the crypto market needs to go in. Unfortunately the reality of the situation is the general masses of people don't need crypto and have no incentive to use it. So since 2017 despite the tech brought into crypto it has not risen market cap wise. I believe these are the numbers we should be looking at. The only way i think that will get resolved is with a more participatory product. I don't mean just bloggers but the general masses of people. Affiliate programs help accomplish that.

My experience is that the first step in creating a referral system is to create a tracking mechanism for the referrals. Since everyone using Leofinance should also have a hive account, the tracking mechanism might be to add the query string r=hiveaccount . If you want to allow different campaigns; you could have a reference page where people get the referral link.

The initial tracking mechanism does not need rewards. After creating a tracking and reporting system then you can form the rewards system.

People who try to create the rewards structure before creating the tracking system often end up with a monster that overpays or fails to properly reward users.