It feels like the developments within the @Splinterlands and @LeoFinance communities are overwhelming all of Hive. In fact, that was the essence of communities - to drive an organic and niche-specific creations that would market Hive in several fronts. It is obvious that Hive blockchain is slowly infiltrating the cryptoverse unnoticed and this is made possible by communities like Splinterlands that is brokering external partnerships and creating value that would bring the masses to Hive.

One of the recent development in the Splinterlands community being the partnership with Major League Soccer Players Association (MLSPA) to create a promising P2E Blockchain Soccer-based Game - Genesis League Soccer (GLS). This would be a massive booster within the the play-to-earn ecosystem and going by antecedents, GLS may model after Splinterlands in terms of transactions, growing number of players and growing ranking in the play-to-earn game category. Hopefully, this would have a positive impact in the economics of Splinterlands. 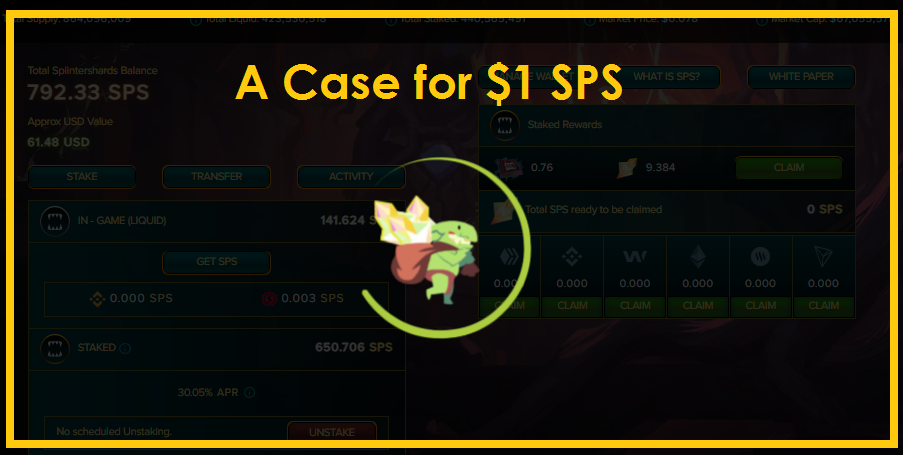 A $1 SPS is not overrated

One of the ways that the emergence of GLS would better the lots of Splinterlands is the added utility it will create for the SPS token. This alongside other new usecases for the Splinterlands' governance token can bring about green candles on the $SPS price charts. It is crucial to see in the eyes of history that the price of SPS is 94.82% down from its All Time High value of $1.27 marked in Jul 28, 2021. There is the possibility of hitting that value in the near future and even exceeding with growing utility alongside growing number of wallets holding the token.

The promise from the Splinterlands team to reward Splinterlands Asset Holders, particularly, SPS stakers with an airdrop would drive up the price of SPS as demand for it would rise in the next few weeks.

There will be an airdrop for all SPS stakers
Will be a token airdrop that is for the whole platform, not just for the soccer platform
Team teased a 6 month - 12 month long airdrop source

Indeed, a $1 SPS is not overrated. The recent listing and trading of SPS/USDT on Huobi exchange is already a huge exposure of SPS token and Splinterlands to the non-hive community which signals a massive onboarding in the next few weeks.

Getting free tokens for as long as 6 months to 1 year is already a good reason to buy into SPS, especially when promise comes from a team with tested growth in digital assets building. Moreover, DAO would be taking place in Splinterlands in the next few weeks allowing SPS stakeholders to participate in decision making, and that again would drive more investors to getting a more firm hodl of SPS to a have voice in its leadership.

It could amount to a very risky crypto investment decision if you do not hodl some good volumes of SPS token. It's important to mention that the forward-minded @leofinance community also has SPS as pSPS in it's PolyCUB DeFi vault still giving about 30% APY to stakers.

Lets be hopeful the next days of SPS charts would make its investors beam a broad smile as $SPS hunts for the $1 price mark.

Here we go web are waiting for this

Yeah. great expectation. Another set of crypto millionaires would emerge.