Hey everyone, I hope you are all well.
Today is the 3rd post talking about the cars bought and sold on the TV show Wheeler Dealers (one of my inspirations) with the Legends Mike Brewer and Ed China behind the wheel.

Back in 2003, Mike decided that he should look for a little hot hatch, and he thought, what a great idea it would be to buy the original hot hatch, the Mk1 Golf GTi. The Golf name, in general, has been a part of the VW lineup since 1974. The Golf has been the car that other manufacturers aim for, as they were the best, bringing VW's build quality to the people, at a much lower price.

2 years later, VW added the sporty version to the lineup thou, to be honest, they weren't very enthusiastic about the idea. They created the GTi, which was originally supposed to be a limited run, of 5000, but they ended up making 420,000 by the end of the original run. What needed to be done?

How much are they worth now??
It seems that these cars have gone up a lot in value since 2003!

A 1983 1.8 GTi car that needed attention went for £4500. It wasn't the best spec and looked quite boring compared to the others.

So imagine how much they could have made if they kept it for 18 years and made it mint.

Geezers with Golf, never seen either blokes persay, mind you Brewer seems to be heavily connected to the British Motor Show.

Regardless lovely motor, I do prefer the swallow tail though,

Thank you Ben. I have seen them both at the NEC, when I first visited the UK after moving to Russia. They both seem very nice. I only know about Golfs since meeting you.

When I was 18 my dream was to buy this car. What happens is a good car that consumed a lot

You have great taste. What did you have as your first car, in the end?

Like this yellow ford escort r3i coupe convertible, it lasted 3 months because coming from work I crashed into the median of the highway 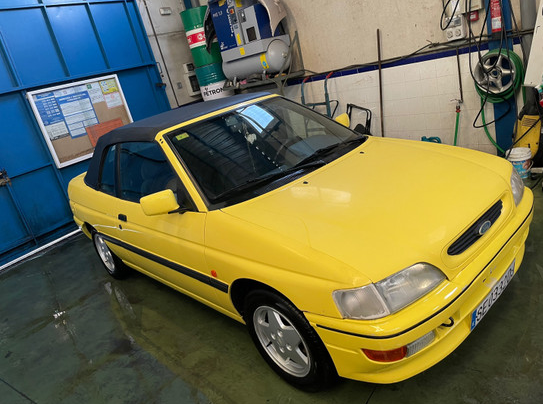 Congratulations @mattsbeamer! You have completed the following achievement on the Hive blockchain and have been rewarded with new badge(s) :