Built into the hillside and overlooking the Rance River, the town of Dinan is said to be the most beautiful town in all of Brittany. The city is surrounded by a medieval wall that dates back to the 13th century, a time when the commune was a strategic port and trading hub along the English channel. 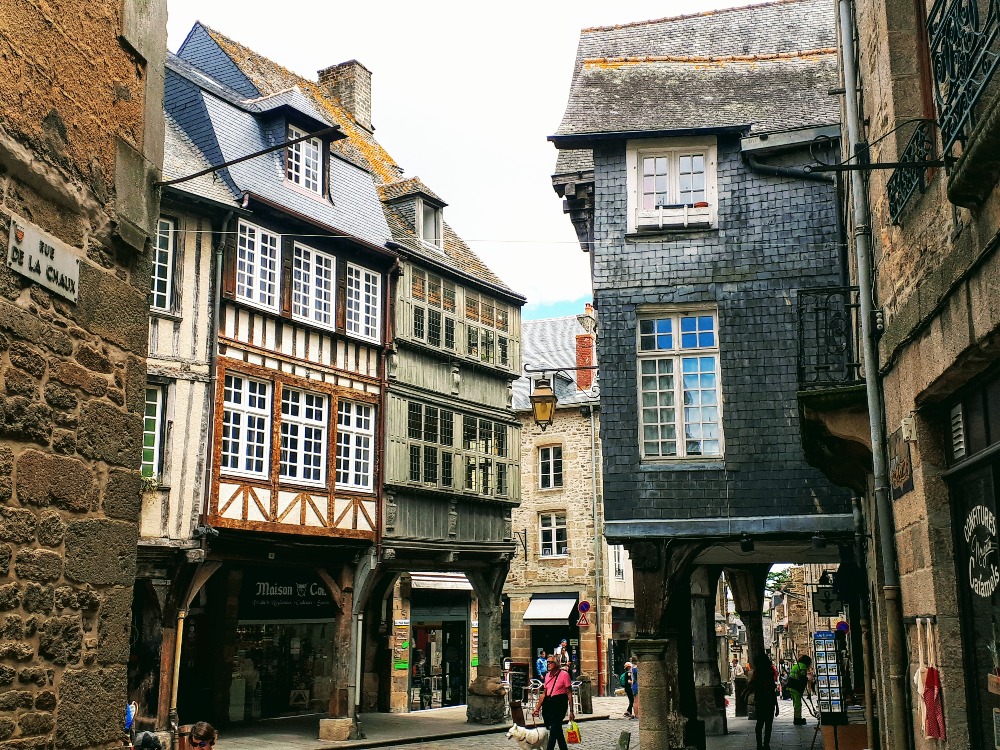 Many of the buildings within the old town also date back to the 13th century when property taxes were based on the square footage of the ground floor. Back then it was common for people to build small shops on the street and then expand their homes outward starting at the second floor. The result is a sort of upside down triangle shaped design that at times makes one wonder how the buildings managed to remain upright after all this time. I believe that laws in the country later changed to inhibited that type of design. People were getting a little tired of the way homes were encroaching onto the sidewalks below and streets in general. 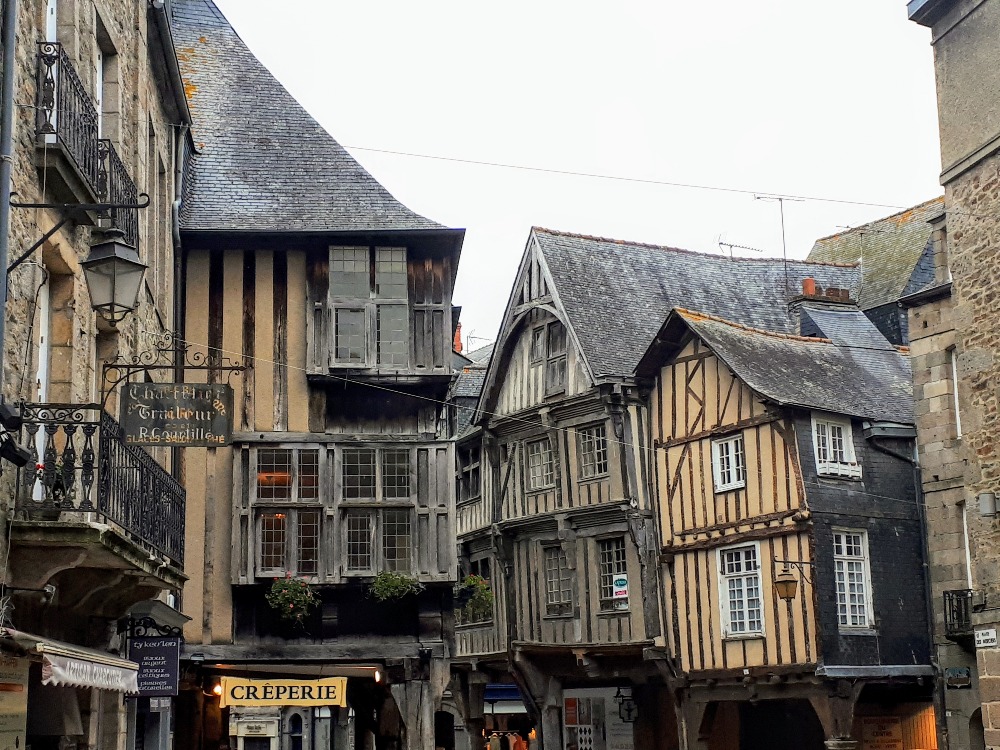 While wandering around the maze old cobble stone roads my wife and I stumbled upon one with a steep downward incline that lead to the river below. The street was called Rue du Jerzual which then turned into Rue du Petite Fort after we crossed under the old city gate. Walking this path is a must do for anyone visiting the town as it has some of the most unique and beautiful homes in the city. 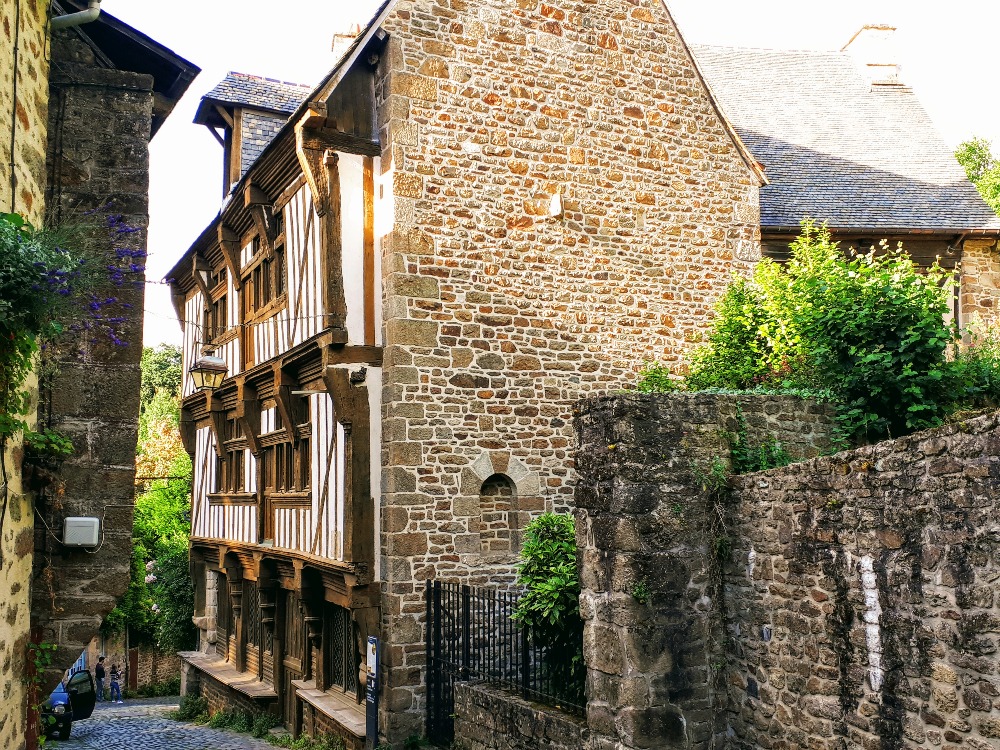 I believe that the large home in the photo below once belonged to the governor of Dinan. To me it had a sort of old style pub and Inn like feel to it. 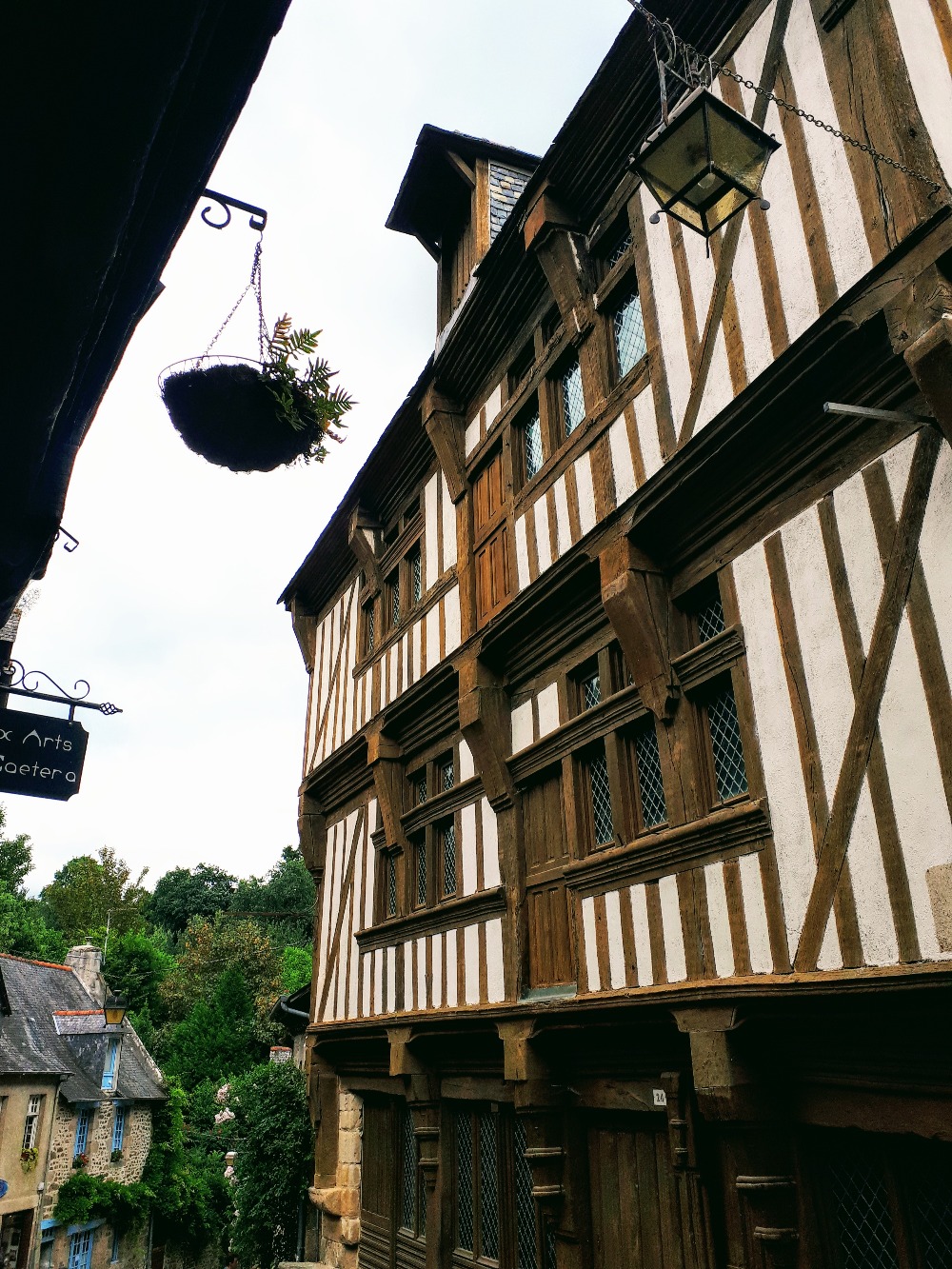 The entire old town is full of specialty shops, bars and restaurants but Rue du Jerzual was reserved for art galleries and workshops. Many artists could be seen painting or heard using electric tools used to carve sculptures. 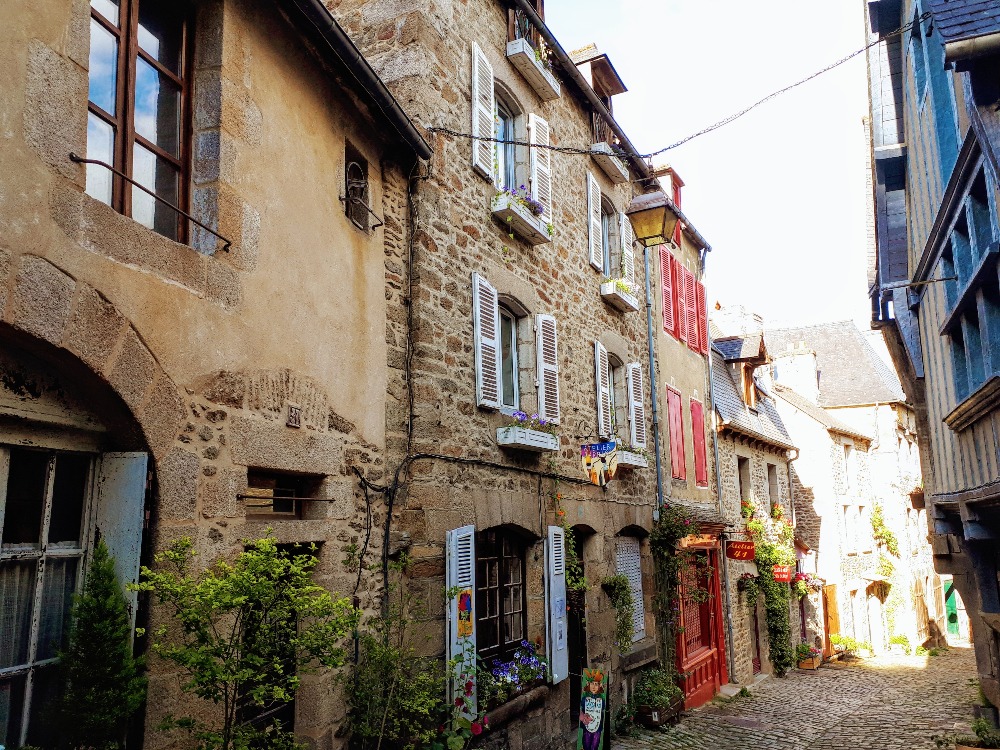 The hill is long and steep but definitely worth it. The river at the bottom is lined with several nice restaurants as well. We had one of the best meals that we have eaten in France in a little restaurant over looking the water. 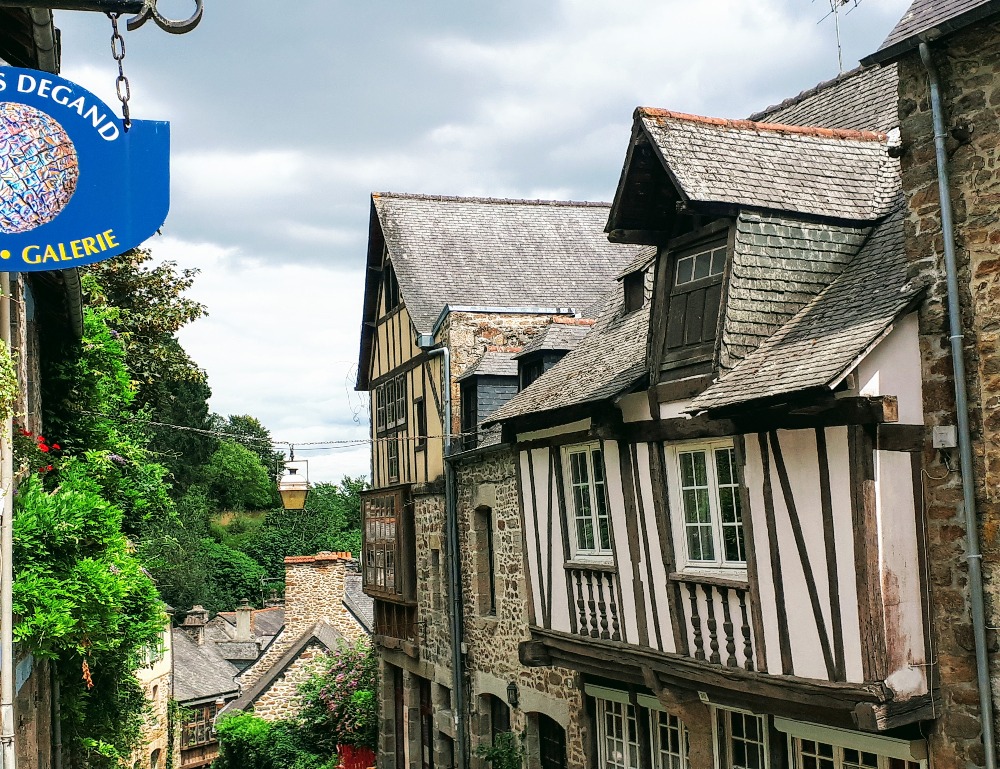 The province of Brittany is famous for its Breton cookies and Kouign Amann which is a rich, round, bit of rolled up pastry that tastes of butter and toffee. The name translates to "Butter Cake" and is toted as the fattiest pastry in all of Europe. Though it was delicious, I honestly felt like I was going to have a heart attack after I ate one to myself. 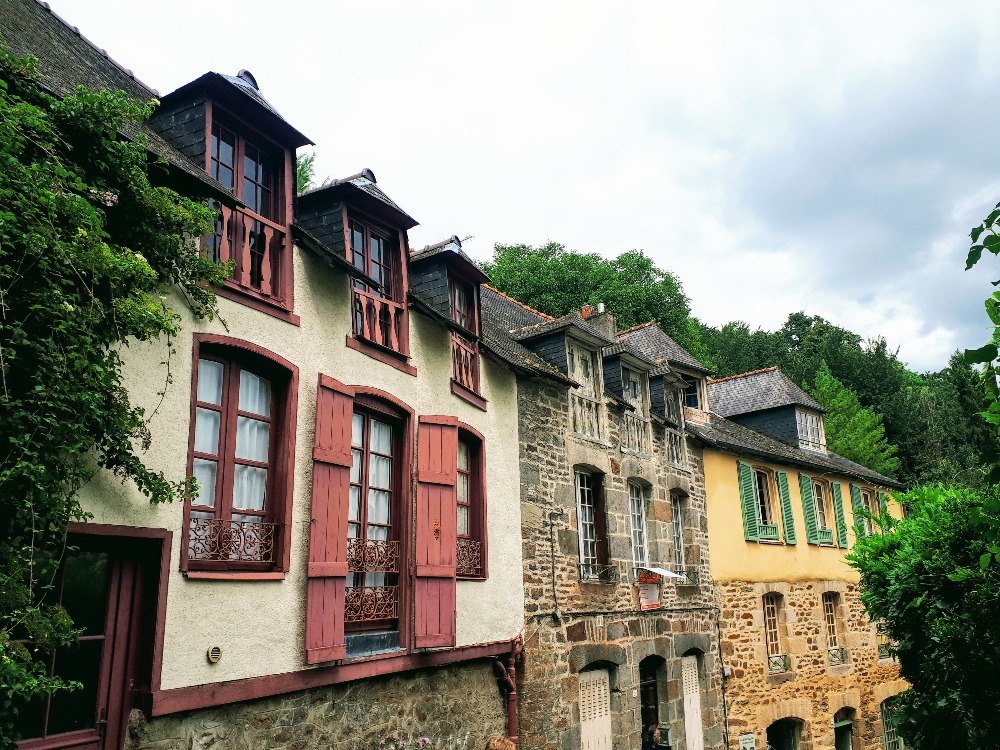 Colorful shutters and flower boxes along the way made the spot very picturesque. 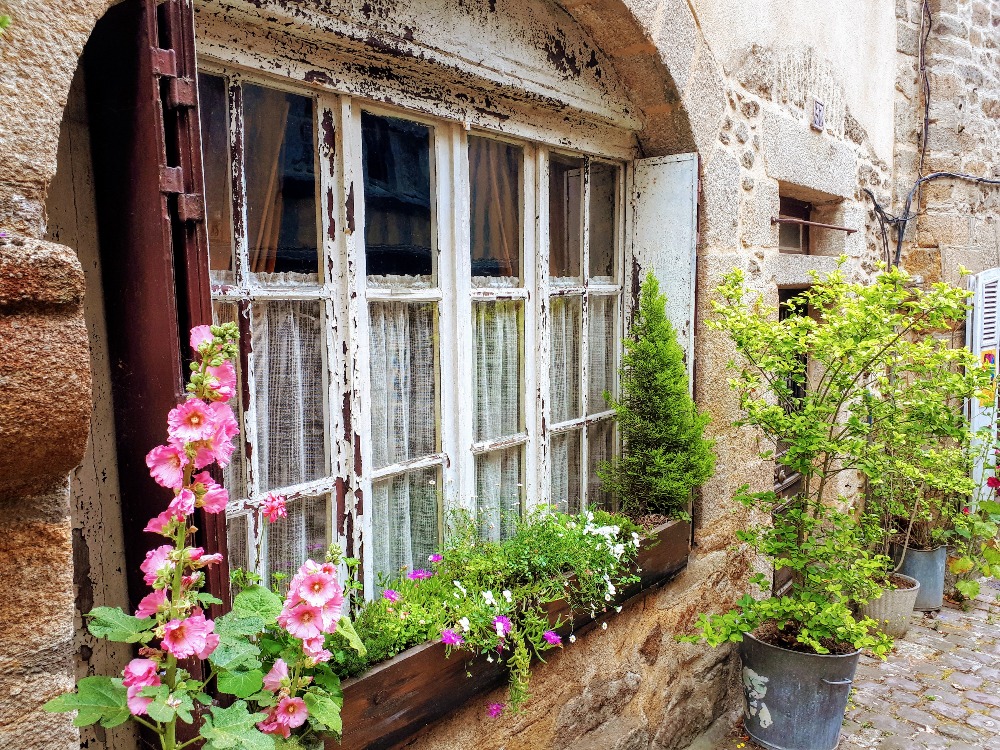 A photo taken at the bottom of the hill. An old bridge spans the Rance River. Here is where we ate supper and had our Kouign Amann before making the trek back up. 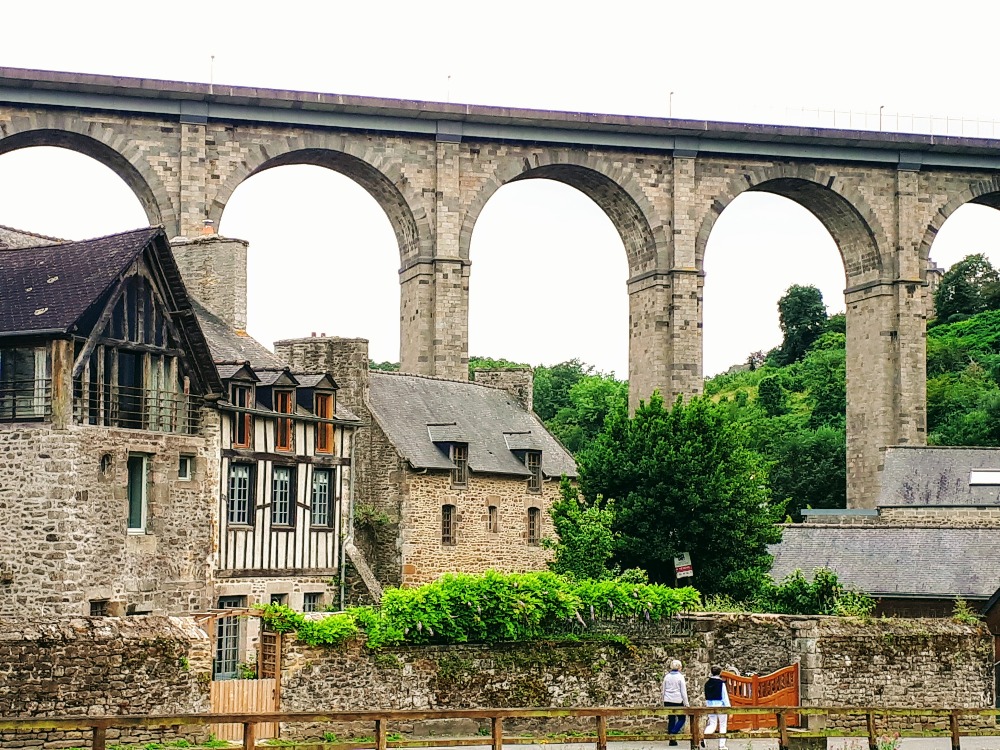 Saint Malo is located about 40-60 minutes from Dinan and Mont St. Michel. I had wanted to visit the city ever since reading about it in the Book "All the Light we Cannot See." 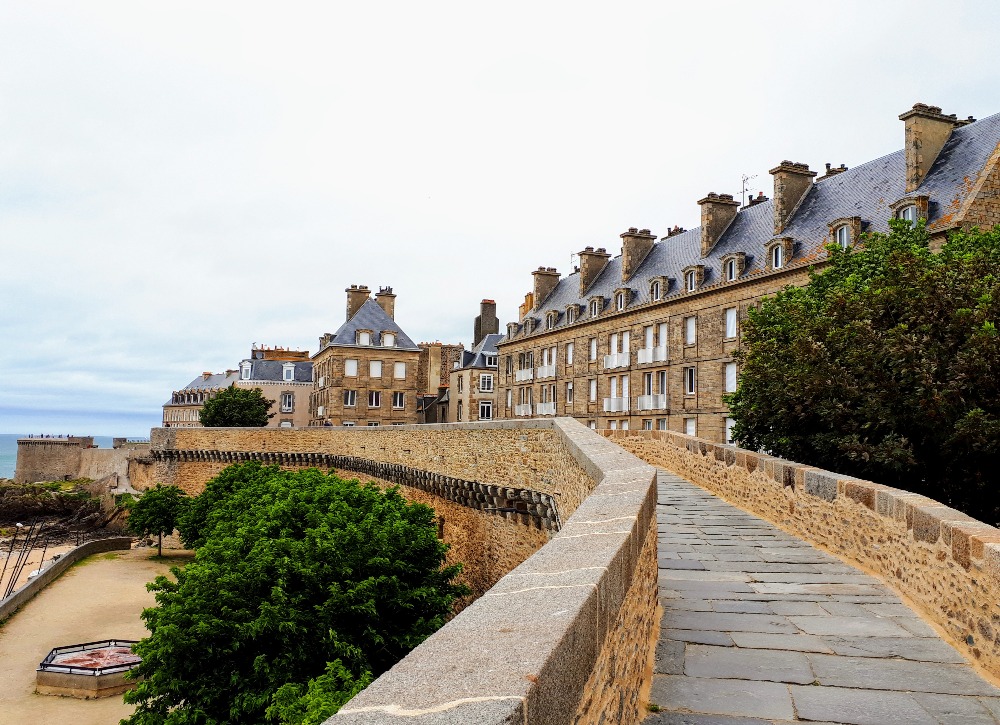 The city was heavily bombed during WWII and was mostly destroyed. It was later rebuilt over a 12 year period between 1948-1960. The old part of the city is surrounded by a massive 3 story wall that circles at least 3/4's of the town. 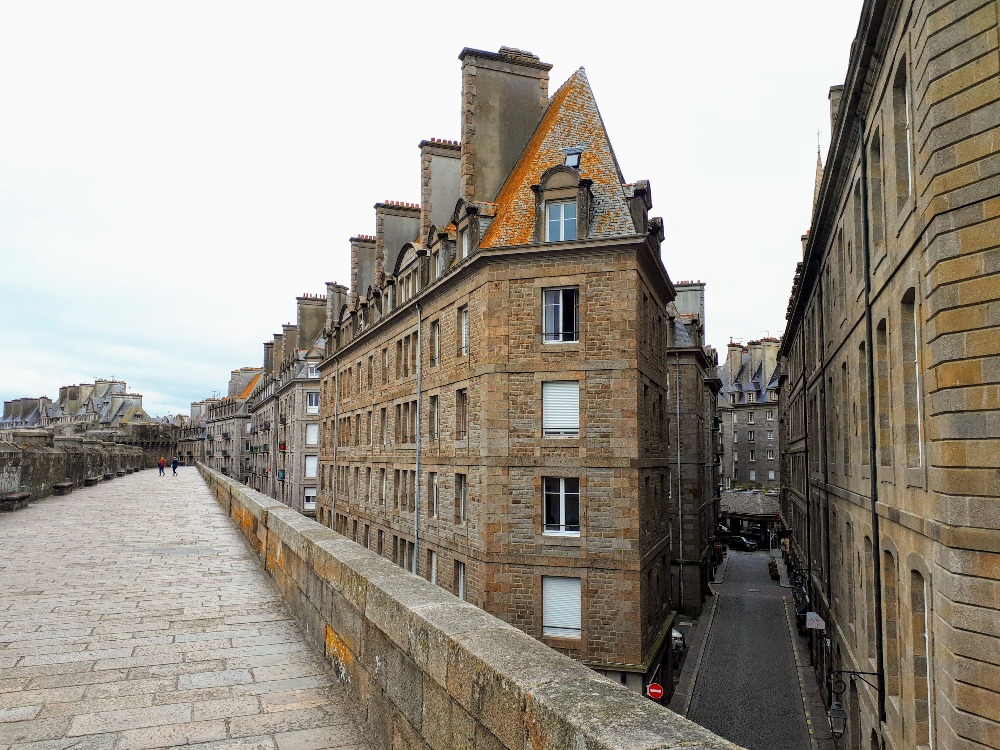 The city has an interesting history associated with privateers as well. Privateers were French pirates sanctioned by the King. They made their living by attacking English and enemy ships sailing in the area. Pirate souvenirs were a pretty common site in the town. 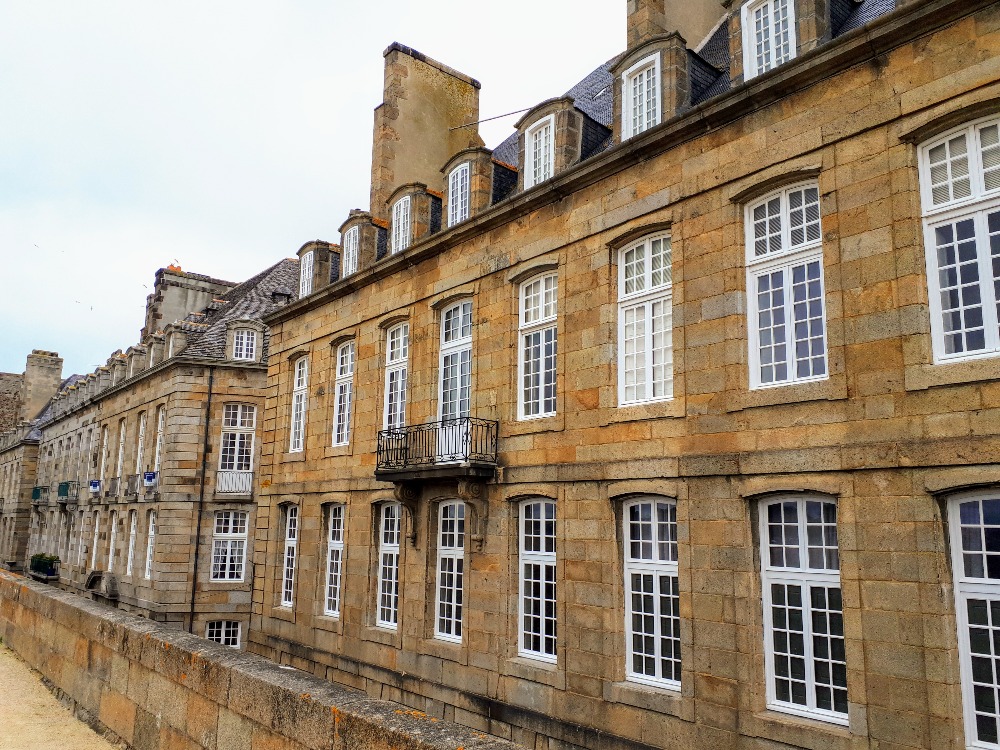 My wife and I took a leisurely stroll along the outer ramparts for about 30 minutes or so before heading beyond the wall to get a much needed coffee. The town within the walls actually had a new city feel too it which was quite the contrast to Dinan. 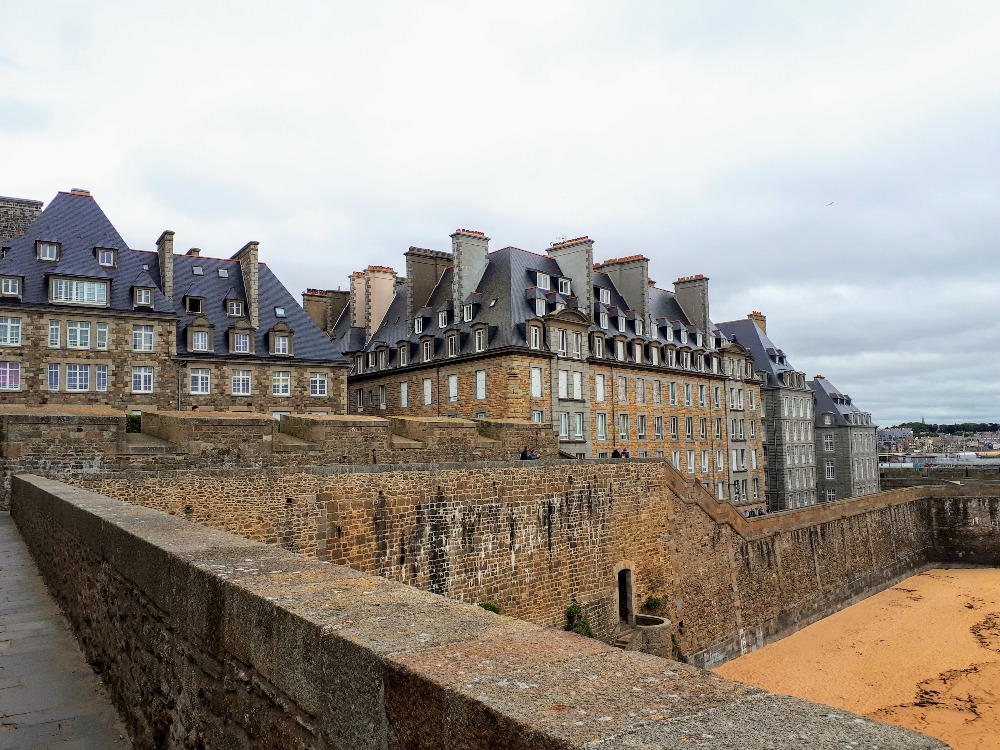 St. Malo has a pretty awesome beach as well. Most of the beaches that I've seen in Normandy are nothing but pebbles which aren't good for walking or laying out, especially when traveling with a dog. St. Malo though had a fine sand beach and several rocky islands and outcroppings that gave it a sort of cove like feel at low tide. Some of the islands had old fortified structures and forts that could be walked to as well. 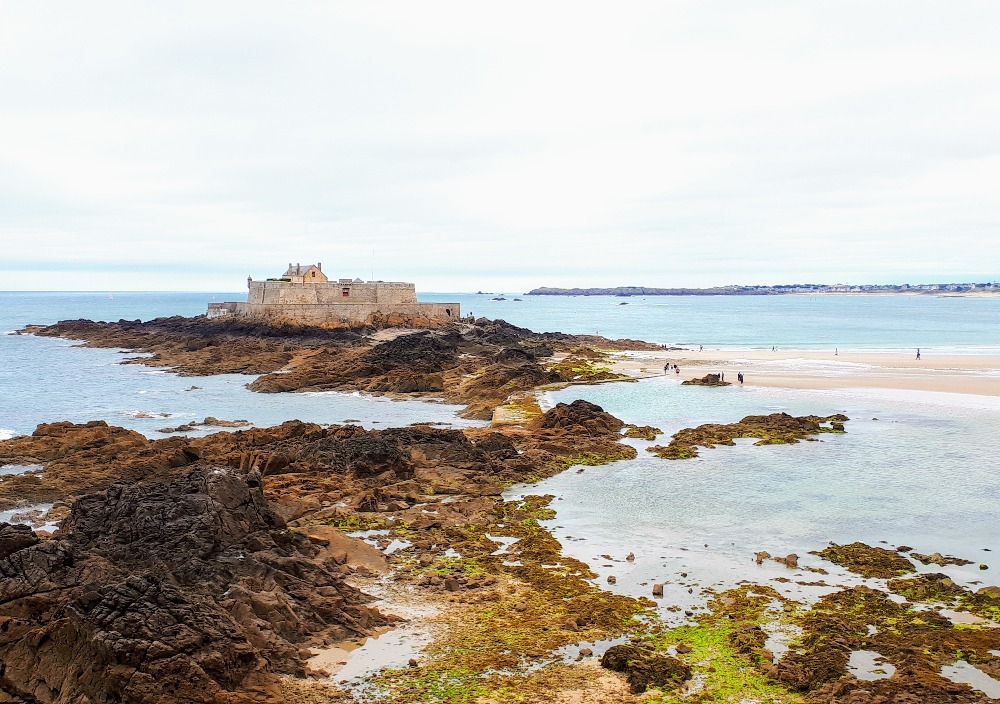 We saw a few people on the beach digging for clams or other shell fish. It looked like a common and fun activity for locals in the area. 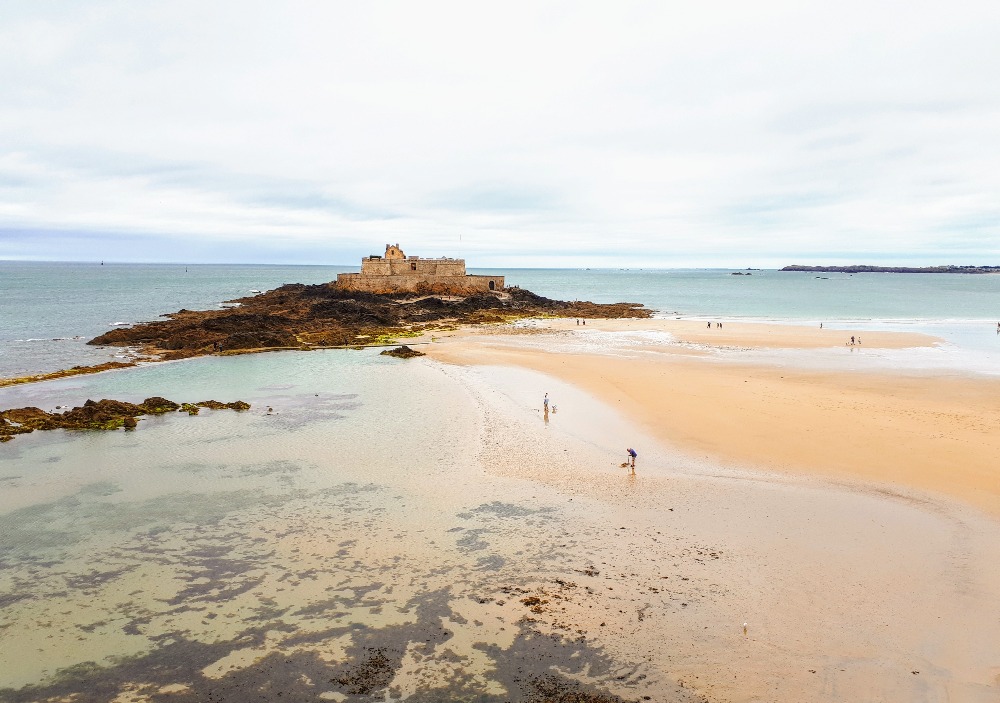 One location a little further was littered with boats. It was kind of neat seeing them toppled over due to low tide. This location was also full of people hunting clams, it must have been a good spot for it judging by how many people were engaged in the activity. 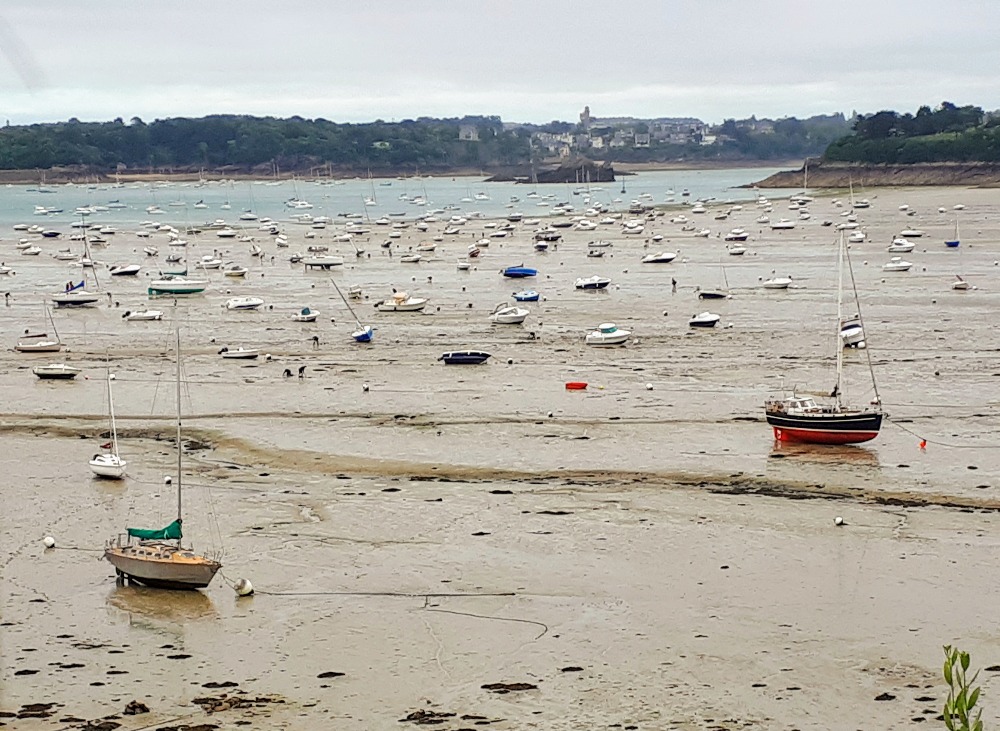 That's it for me, Thanks for Reading.

Very nice report with great photos, as always! With the kouign-amann you've been had a little bit, though. The real kouign-amann come from Douarnenez, that's a small port north of Quimper on the other side of Brittany :-) Not that it matters, once they go over a certain amount of butter your heart won't care anymore. Good though, ain't they?

Oh, I see. I thought that the entire province of Brittany was known for the desert. We also saw that it was big in St. Malo. There was a small store that looked like it could be a store chain that had a lot of glass windows where you could watch them being made. It was actually pretty neat. We watched the dough being folded and then pressed in a machine like 10 times or so. We didn't at one there though. My body couldn't handle a second one, even the next day.
But I bet they are really good where they originate from - Douarnenez as you pointed out.
And yeah, very tasty and sooooo much butter. I could literally feel my heart shifting into a lower gear to make it through the process of digesting the thing Hahahaha. After the first bite I was thinking "I'll be lucky to make it out of this alive."

I have the Kindle version of the book, All the Light We Cannot See but I haven't started it yet. A friend also highly recommended it. It must have been interesting to visit St. Malo with this story in mind. We sadly never made it to Dinan. Beautiful photos, The buildings in St. Malo still looked the same as they did. They seemed to have even gotten better with age.

I have heard some mixed reviews on the book but I really enjoyed it. I'd say and its worth a read.
Perhaps Dinan is a place you can go back to one day. You never know.

Thank you, I look forward to reading it this weekend. Yes, I'll keep my fingers crossed for Dinan 🙂