Money: The Social-cultural Impact & Influence On An Advancing Society

josediccus (78)in Cross Culture • 3 months ago 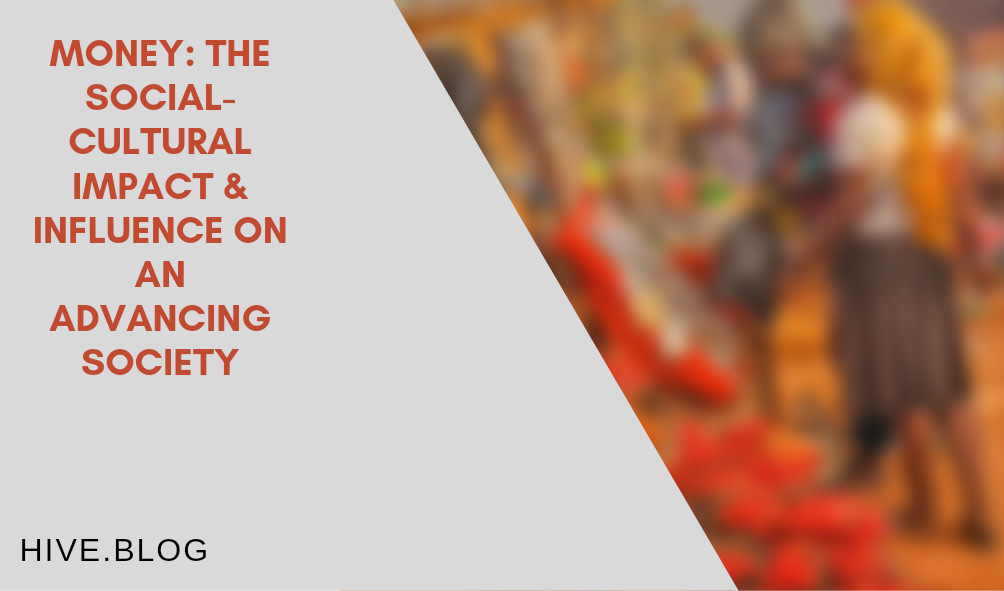 I used to be fascinated by @selfhelp4trolls observation about sociocultural practices in Japan and anytime I make a direct comparison with the society I come from, there's always this contrast. I'm however always concerned in the cultural and financial practices of people, or the financial beliefs that stems from a cultural perspective which people have come to cultivate overtime as a societal norm. One thing I've noticed is that people who are wealthy, (not all, just a sizeable population) are often pressure to show off their wealth.

This is Competition at its peak. The reason why this is so is that success needs to be written on paper, needs to show from the kind of clothes they wear, the wristwatch they put on and most importantly, the phones they're actually using. Using an expensive phone for example, supposedly communicates success, it's more or less like a non-verbal communication that gives people idea about your personality and most importantly your financial power. This is why scams are easily sold in Nigeria.

People have the impression that a person needs to appear rich to be actually rich, The average Nigeria wants to sell an impression. This is because they feel that one of the most special features of money is creating an impression on their external environment. It's become a cultural norm. Once people could feel, think or see that you have money, they treat you rather differently.

Now, seeing or feeling that you have money is different from actually knowing that you have money. When competition is part of the sociocultural norms of a people, there's always the case of people trying to create a dazzling impression to seem like what they're initially not. Another thing is, in Nigeria people want to "see" and not actually "know", they believe that what they see proves what they ought to know and hence it's easy to create a manipulative image to sell a particular impression

The social media in Nigeria for example is designed to put people on edge. They want to belong, feel among. The pressure to feel "modern" is why a lot of people use their life savings to buy iPhones. Without these iPhones having a secondary purpose other than fulfilling the need to be classy or trendy.

The need to appear rich is often greater than the need to be "actually rich". Thing is, the former is easier while the latter is more difficult. Realistically, we have less actual rich people, more than we actually know. But it's often difficult to decipher. The people who are actually rich tries to stay away from competition, because competition puts them in the limelight. The people who are really wealthy and control means. Try to avoid the limelight, this majorly stems on security issues. This is why it's difficult to know people who are wealthy.

The Gratification Of Seeming Rich

The average Nigerian always craves external relevance rather than being fulfilled inwardly. It's a social-cultural norm that decides some of their economic decisions. It's difficult to hide how wealthy a person can be, but while a few people are trying to prove they're not rich, the people who aren't are trying to prove that they are. Furthermore, it's a contrasting situation.

But the reason why this is truly so is that money moves people, true wealth don't there's the balance that comes with being wealthy, it's more important than that gratification you get from selling an impression. Like I said earlier, appearing rich unlocks doors for you in Nigeria, so it's one of the gratification which a lot of people wants to attain. There's this cultural status you unlock, it's a sort of invincible ladder built by the society which you have climbed, hence, become relevant.

A Queer Way Of Seeing Things

The financial practices of the average Nigerian will thrill you. Sundays are for rice and the food that might create the impression that a person is broke or poor, is cassava flakes (garri). People are guided by impression, and they forget what truly matters. So many decisions we make are guided by the environment as well as fear.

The Nigerian state is a conglomerate of different societies with little or no difference but bounded by similar financial practices. However, there's a need to be different. This should stem from the fact that the world is changing. You don't need bullion vans to hold or save money. Technology is changing and this should impact the social-cultural practices of people living in many African societies and this should also include the mindset towards money making

Desperation to receive the power and perks that come from seeming rich.

Sadly such pretence and meaningless show drives one deeper into poverty.

It's probably rampant in so many societies. It's worse in many Nigerian societes. This is how deceit is being sold, you know. The faking it till you probably realise you haven't put enough energy into making it.

I definitely agree that there is plenty of people who want to appear rich while those that are near the top just live life like normal. I don't think Zuckerberg would bother showing off a car or some fancy meal he got because there would be no point. His own success and wealth far makes it so he doesn't need to worry about things. I don't mind "not appearing rich" even if I was rich. It's not going to really change my life much except attract maybe a few people who might want some money.

Like you said, at the end even appearing rich might even attract the wrong kind of people. Like you said someone like Zuckerberg or maybe Jack Ma wouldn't do that.
It's probably one of the problems of many people. They try to look or seem rich when they should actually channel that energy to actually work to attain wealth.

Social media is certainly not for the light-hearted or you would find yourself committing crimes just to keep up.

I think the flaunting of money here comes from a belief that you would be more respected if you are rich and most days this belief is true in our society.

Also, if anyone has the mind to say garri right now is for the poor then they aren't in this economy cause the poor can barely afford it.

Also, if anyone has the mind to say garri right now is for the poor then they aren't in this economy cause the poor can barely afford it.

Nailed it. Another aspect is that even rich people take garri, it stems from liking it and not really because it's for a group of poor people. In reality I believe that the world is changing. Our norms no matter how perfect they might seem has got to change or probably become even better with time.

I seriously doubt that our norms would change in Nigeria, we still have practices that originate from the 80s and 90s so it would take a whole lot to change these.

It would definitely take long like you said. Nigeria isn't organically growing in so many aspects and this is totally pathetic. We aren't moving with the change in the world.

Hopefully, it happens sooner than later.

I agree with you bro, that is how it is here

A Queer Way Of Seeing Things
The financial practices of the average Nigerian will thrill you. Sundays are for rice and the food that might create the impression that a person is broke or poor, is cassava flakes (garri).