Myanmar - The longest wooden footbridge in the world 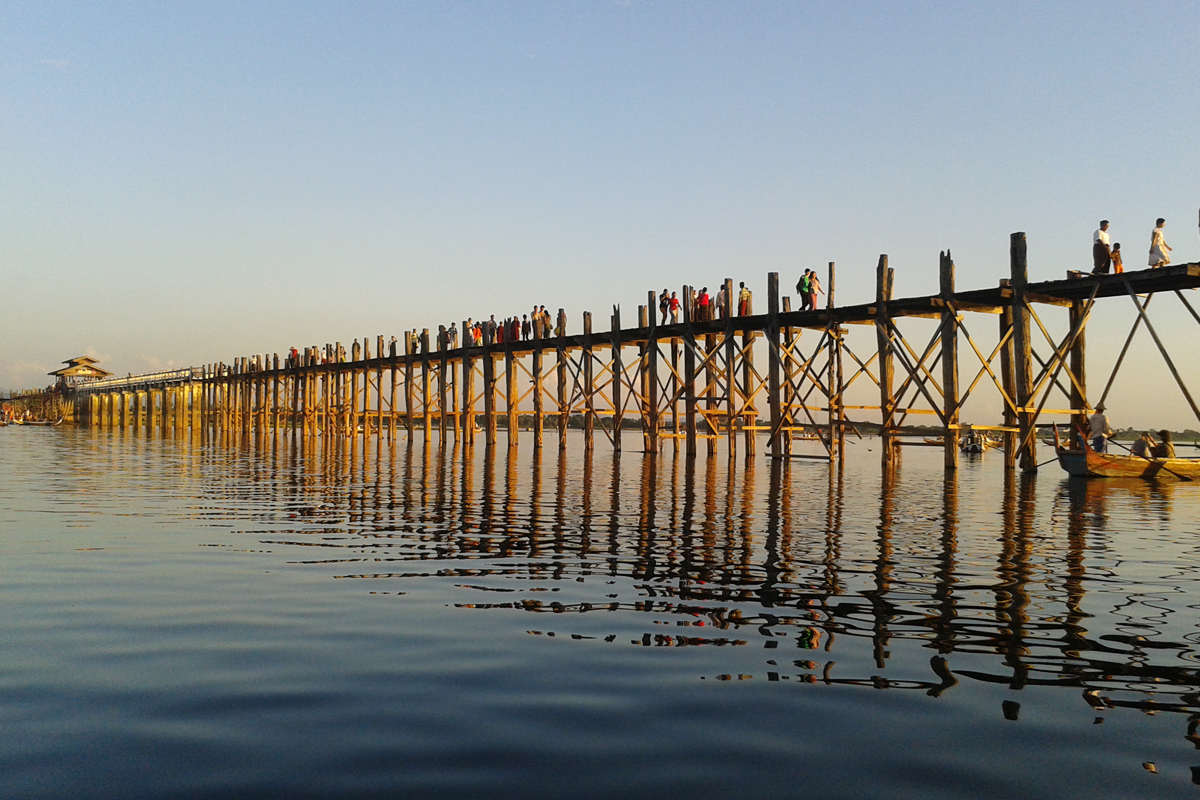 Among the places I chose to visit in Myanmar, Mandalay was a highlight and should be included in anyone's travel plans to this country. It's the second largest city and once the capital. It's not only the former Royal Palace and all the famous temples and monasteries that makes it worth visiting. The surroundings offer many great daytrip. One of them is Amarapura where the main attraction is the iconic U-Bein bridge made of teak wood. The longest footbridge in the world. When we did the tour we had allready done two full days of Buddhist temples and monasteries. A walk on the wooden bridge was a nice contrast to Mandalay. 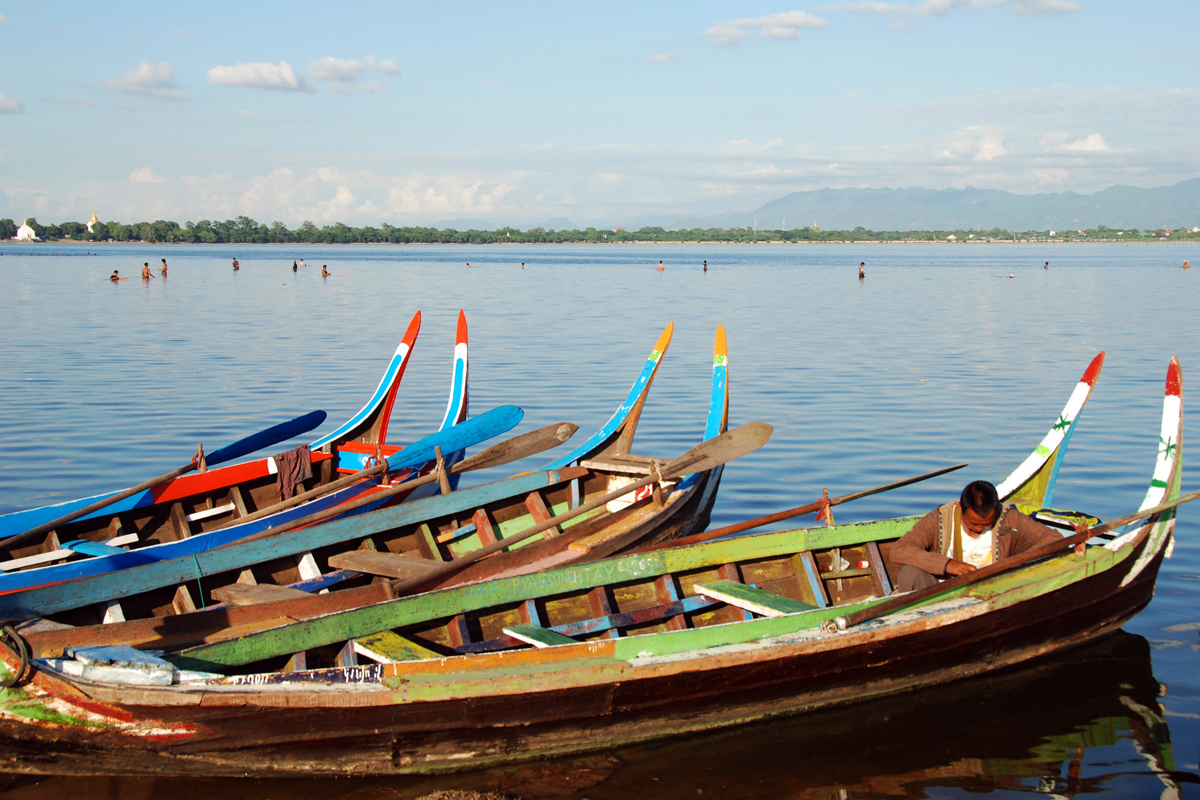 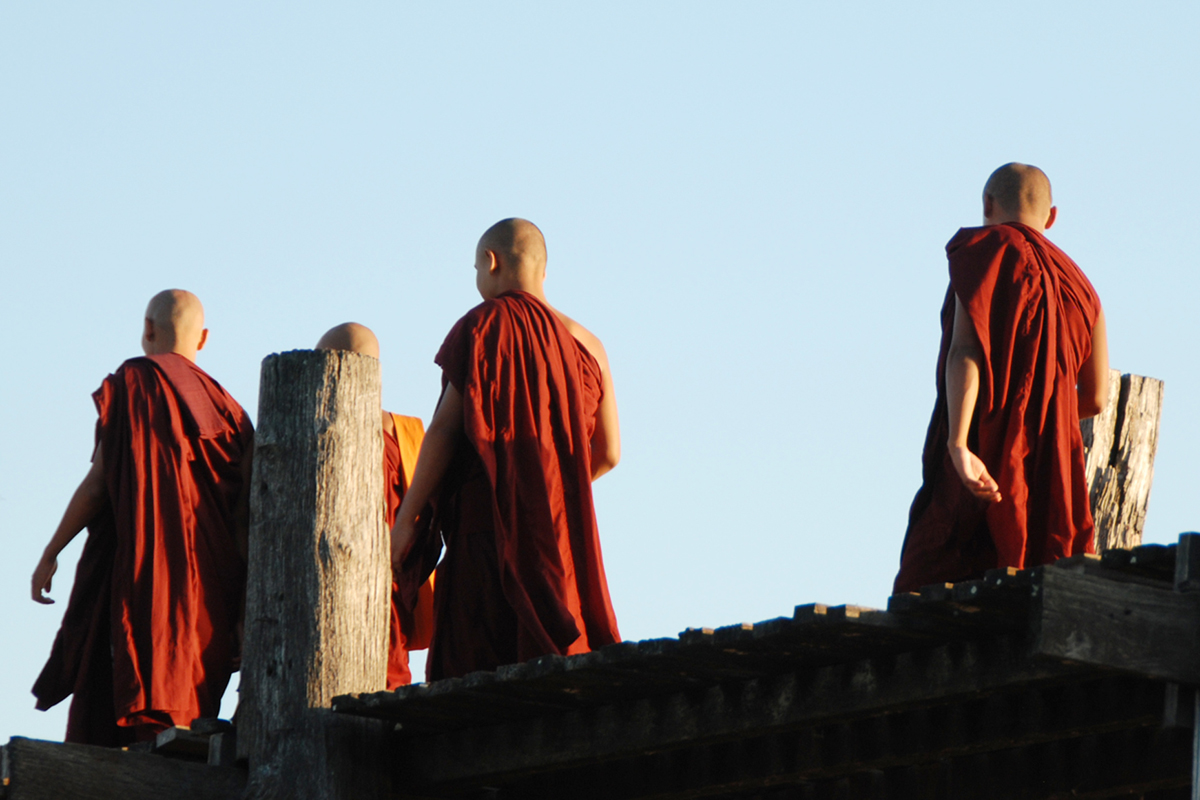 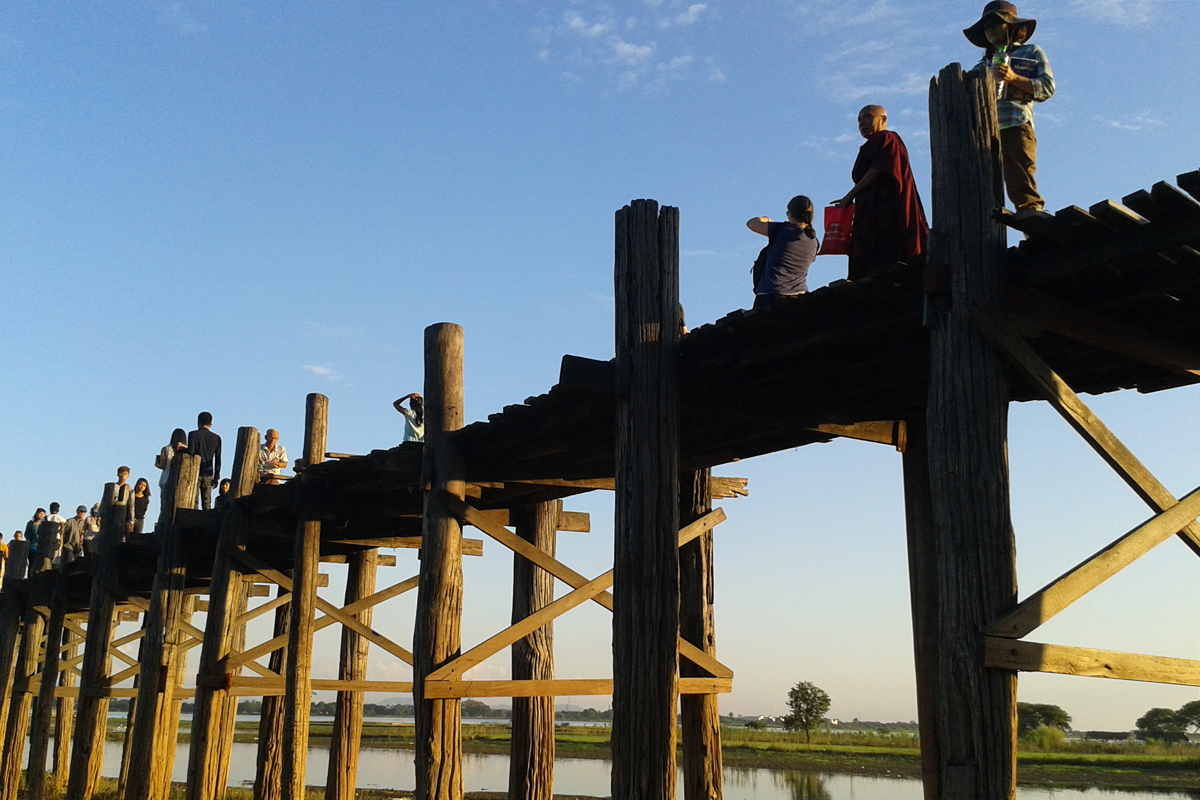 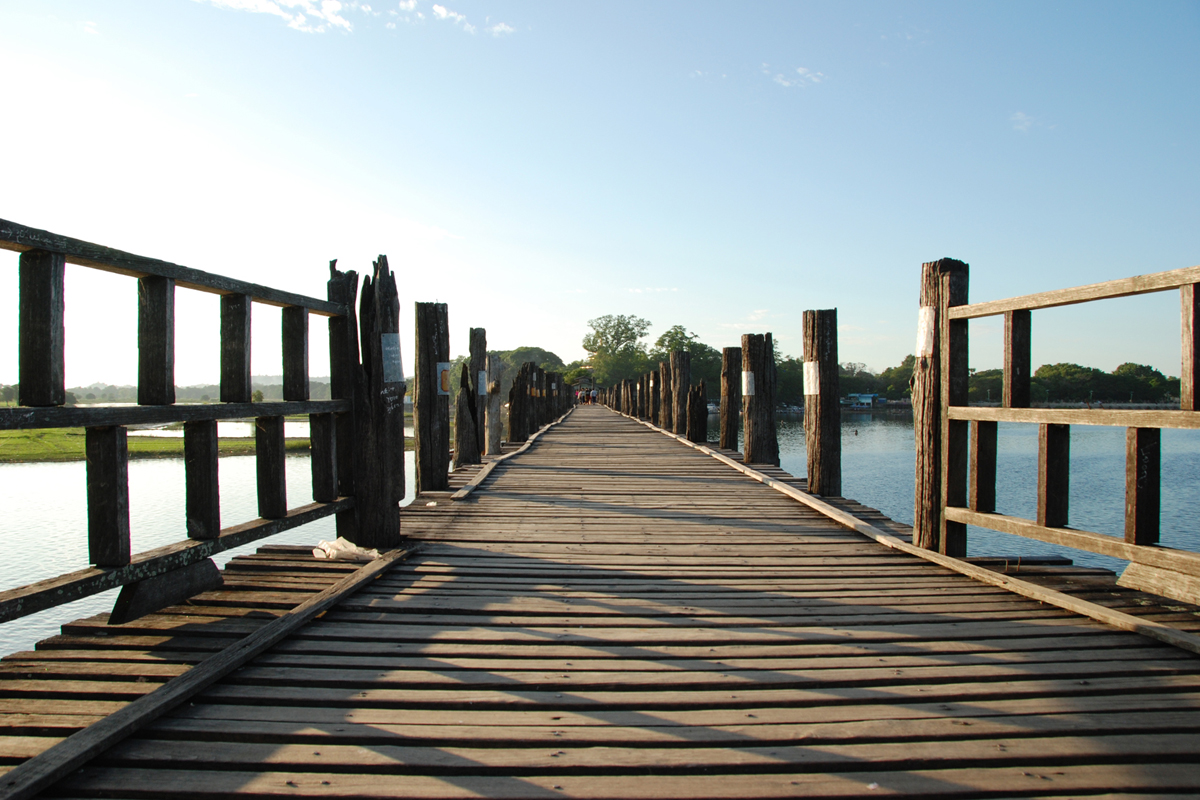 The U-Bein bridge should be visited either at sunrise or sunset. We chose the latter. Actually we could have done both, since Amarapura is only a short drive from Mandalay. But a walk on the bridge at sunset was no bad choice at all. We also hired a boat, which was a good way to see the bridge from both sides and get even closer. 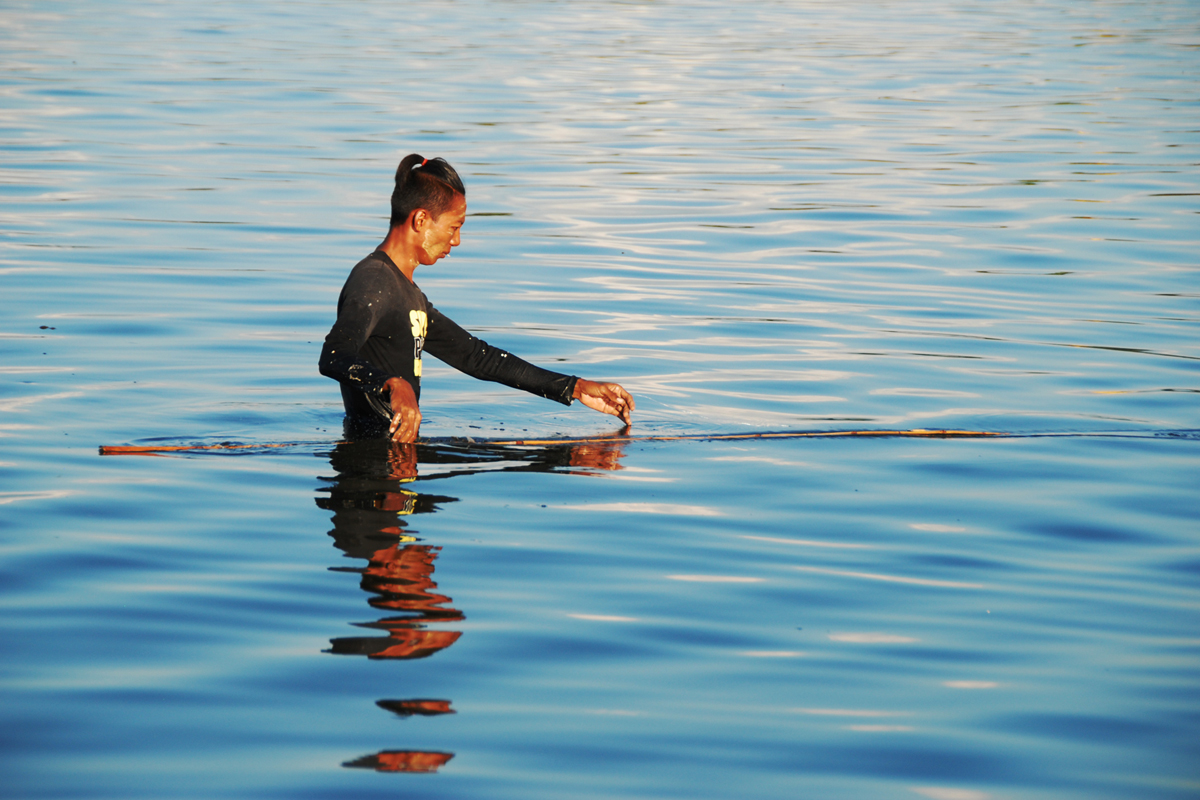 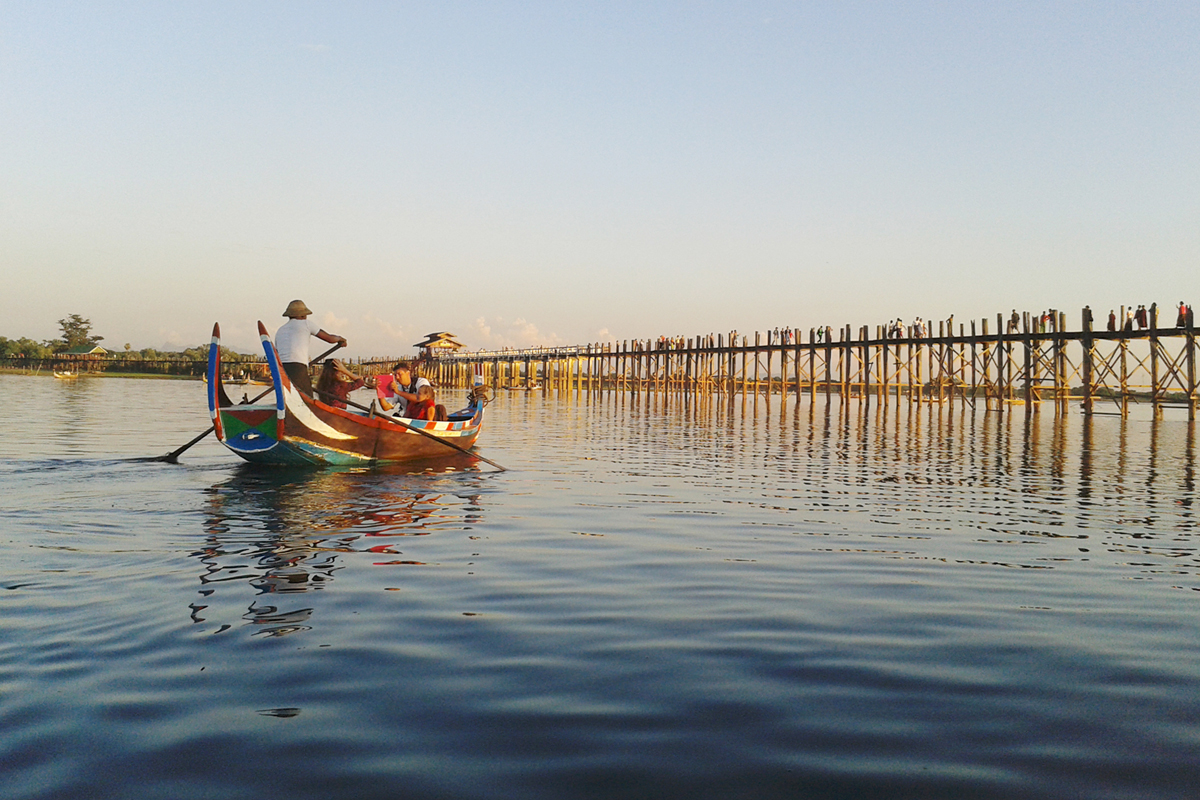 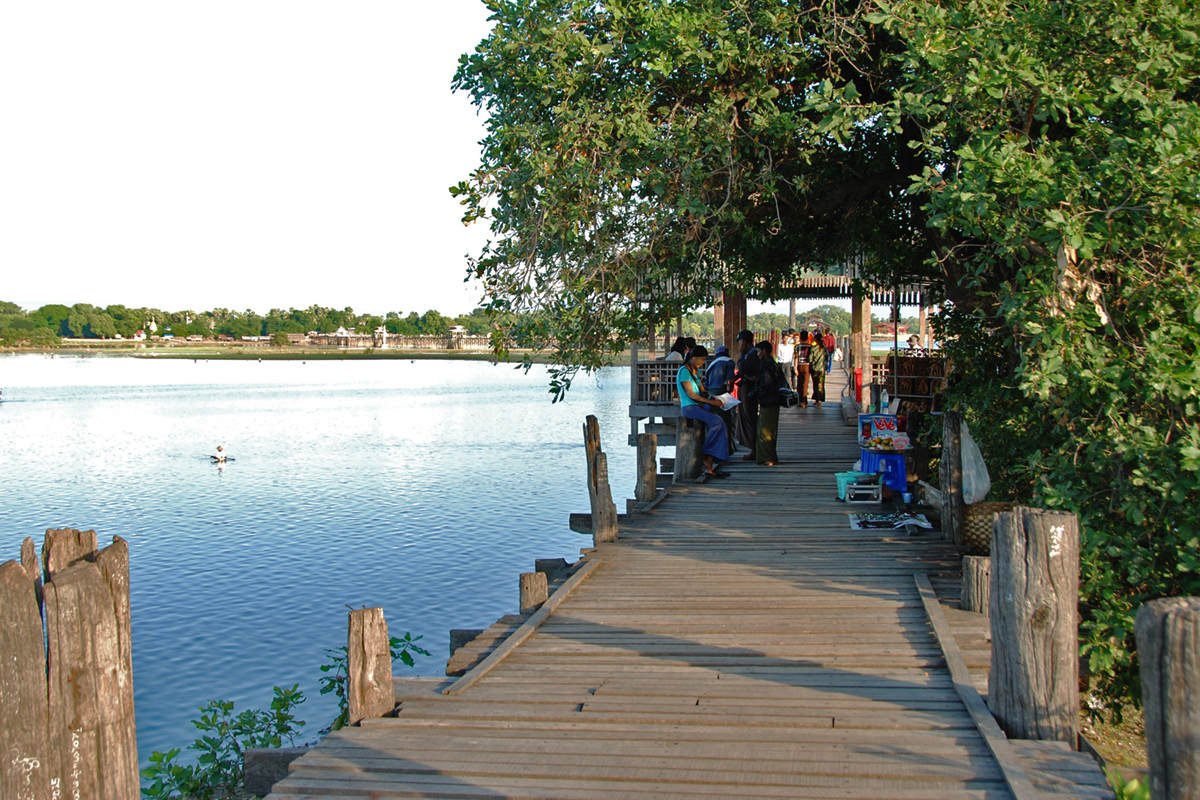 When walking on the bridge, you will be walking on the remains of a royal palace. The teak planks were taken from the palace in Inwa, not far from Mandalay. So it's not just a walk on a flimsy teak bridge. It's also a walk on historical remains. 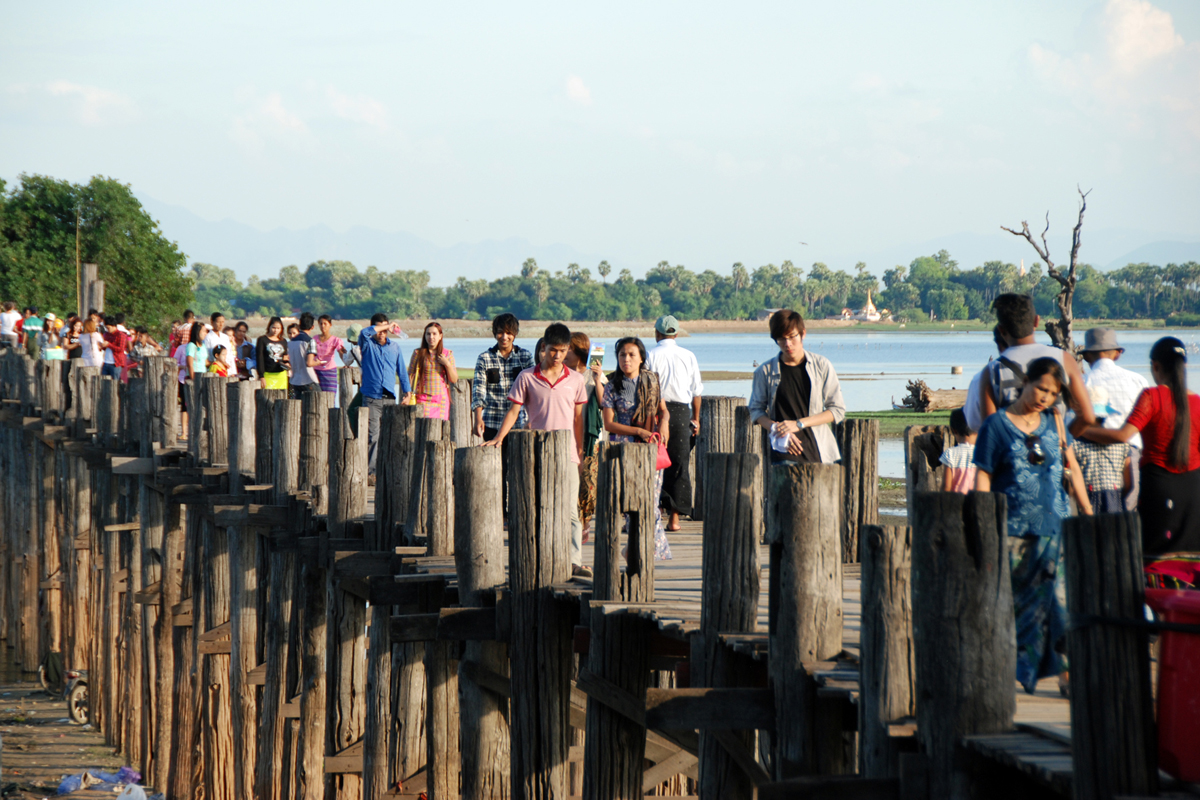 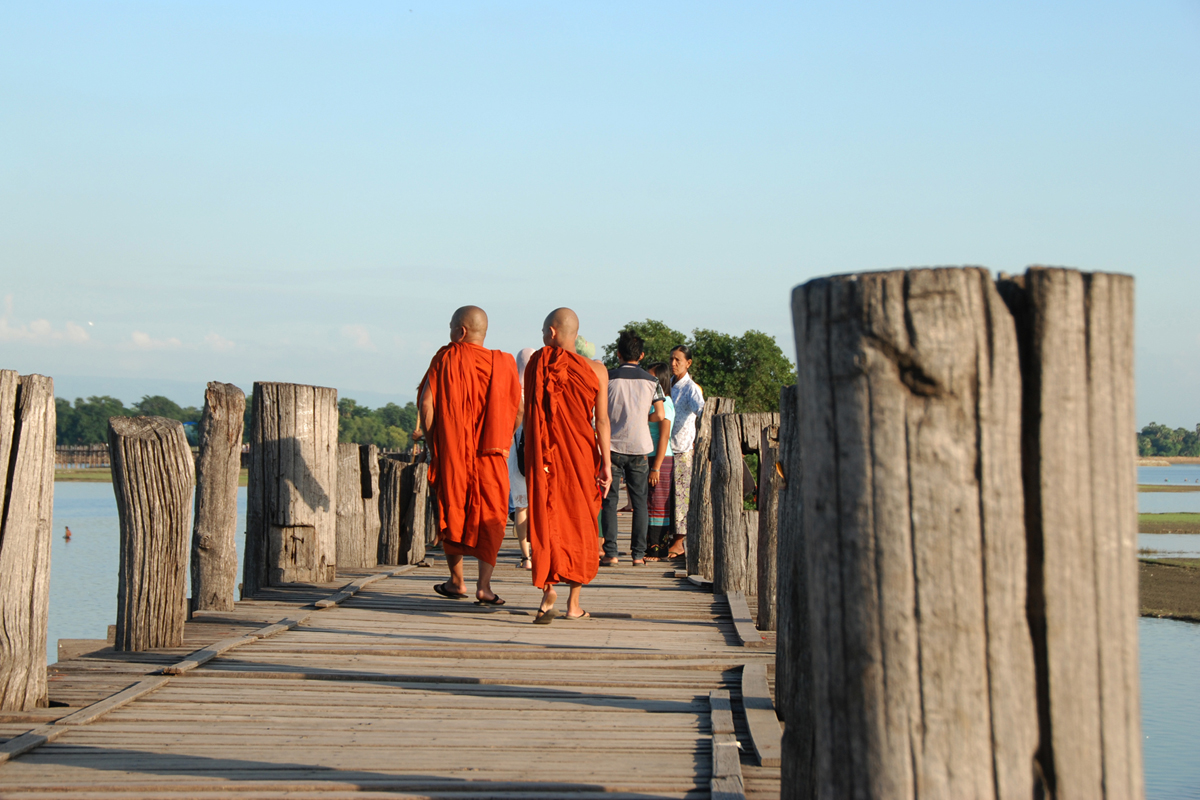 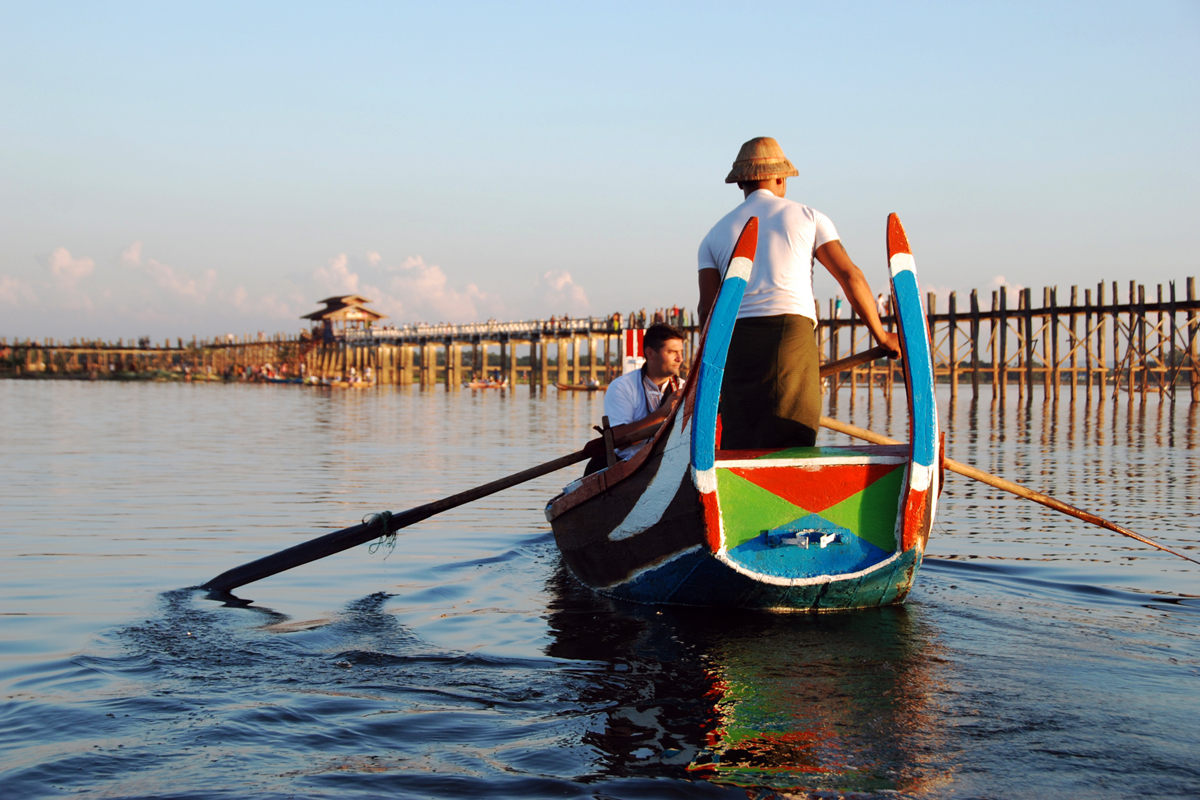 The railing is missing and the planks squeak under the weight of us. Especially when a small group is passing over at the same time. Local villagers and tourists are walking in both directions. Some with bikes and others with heavy loads. It seems as the bridge is still important to the locals. 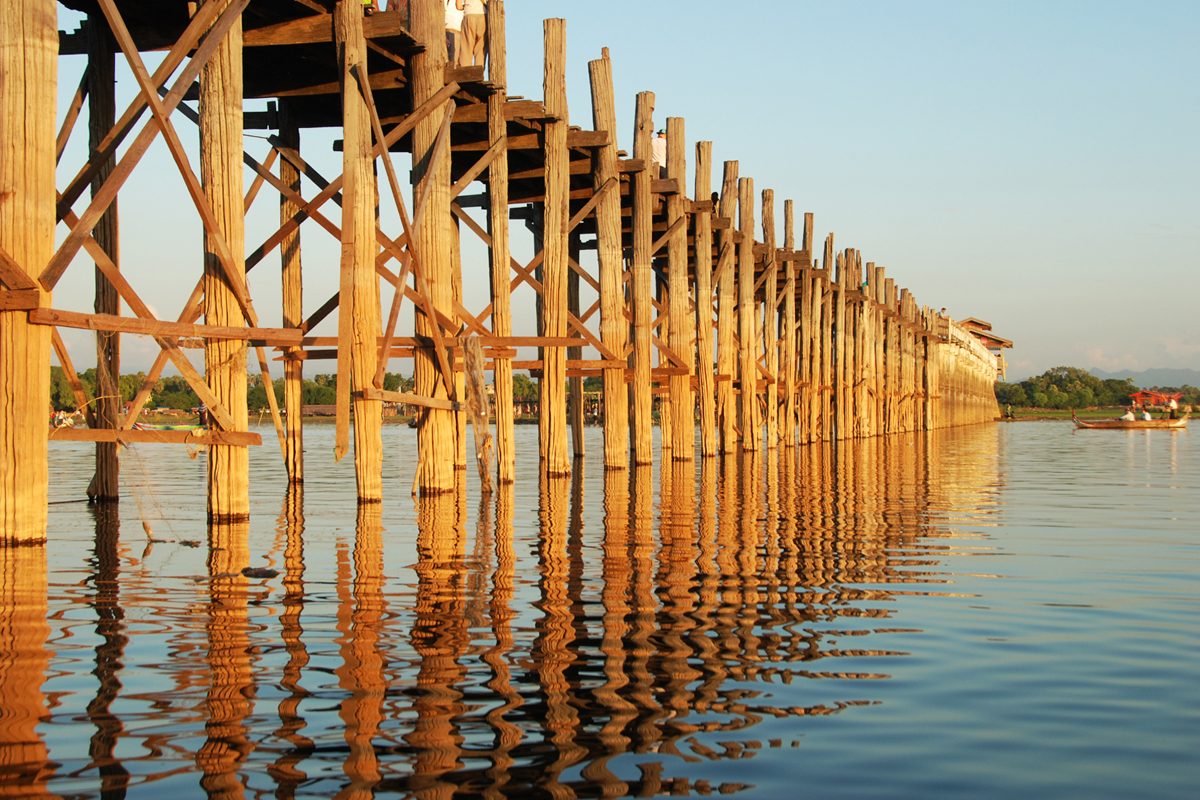 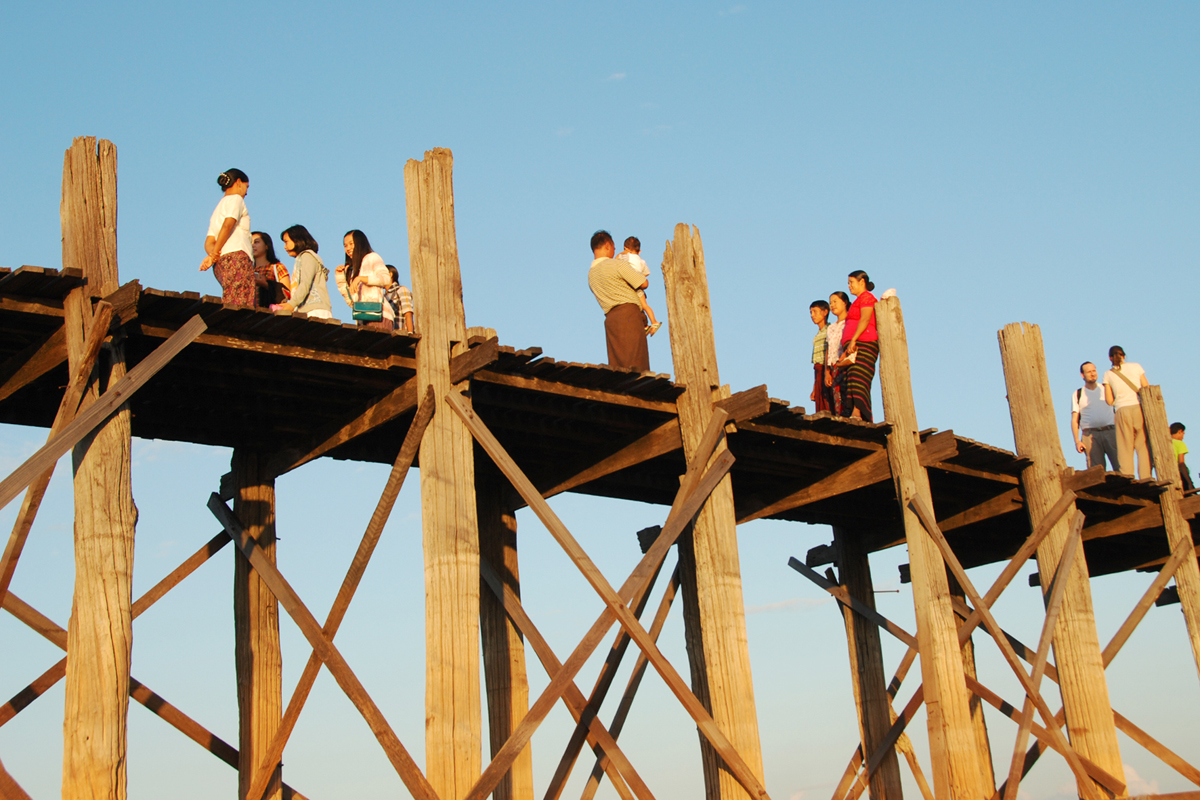 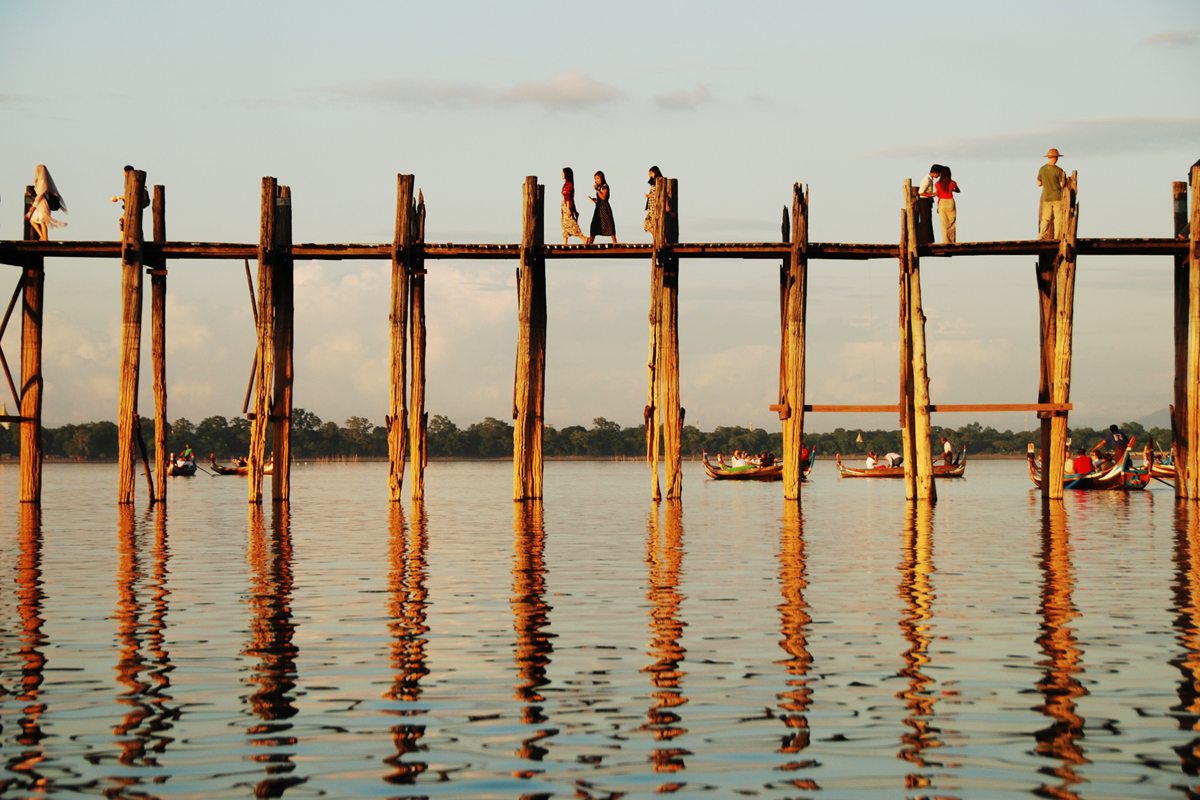 The bridge was built almost 200 years ago and has a lenghts of 1,2 kilometers. That makes it the longest wooden footbridge in the world. At least when it comes to this type of bridge. It's crossing the shallow Taungthaman Lake, connecting the two banks. We learned that the bridge is named after the builder who was a man in an important position. It's also said that he built the bridge because he wanted to have a fast access to Amarapura in case of attack. 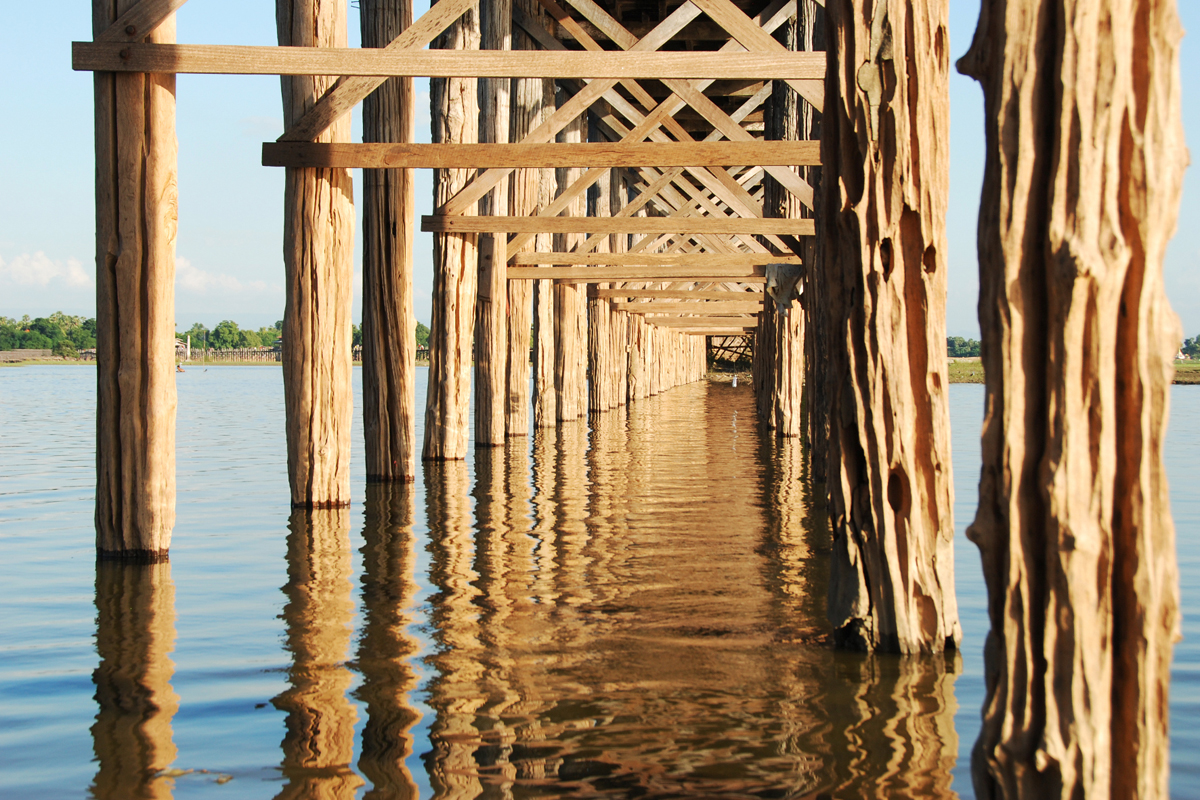 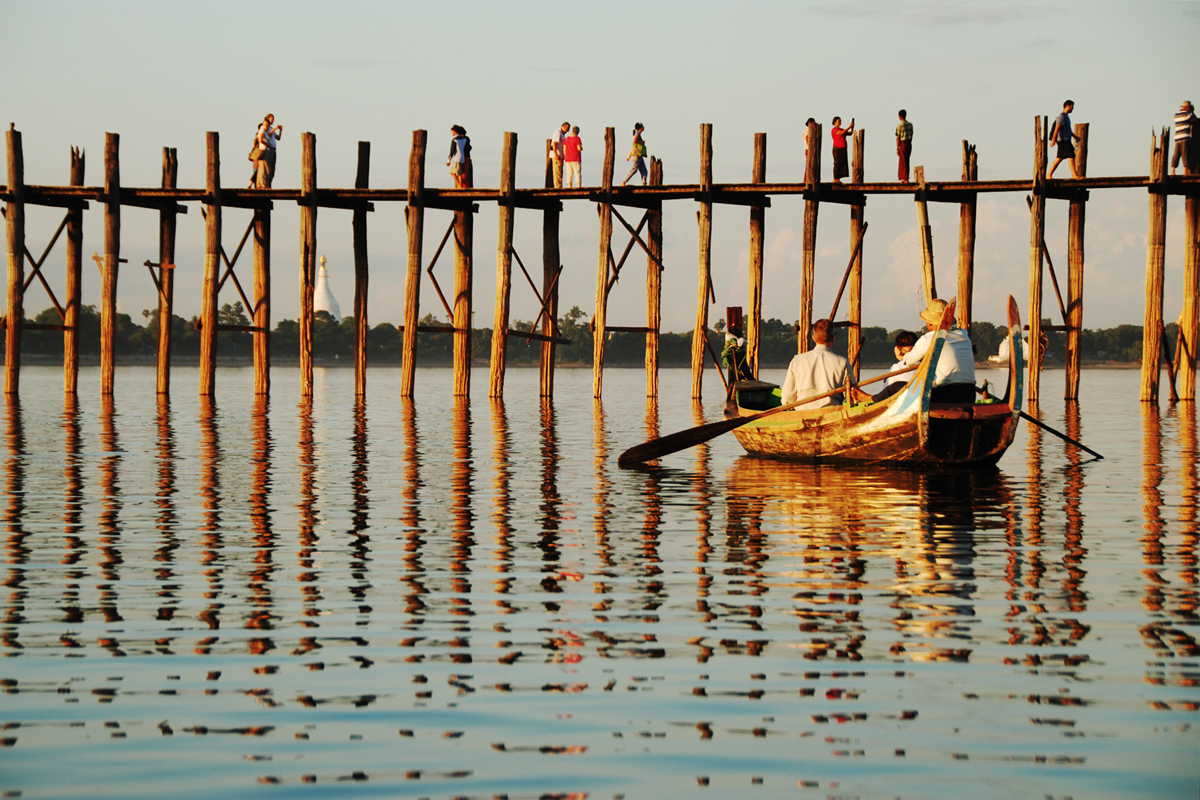 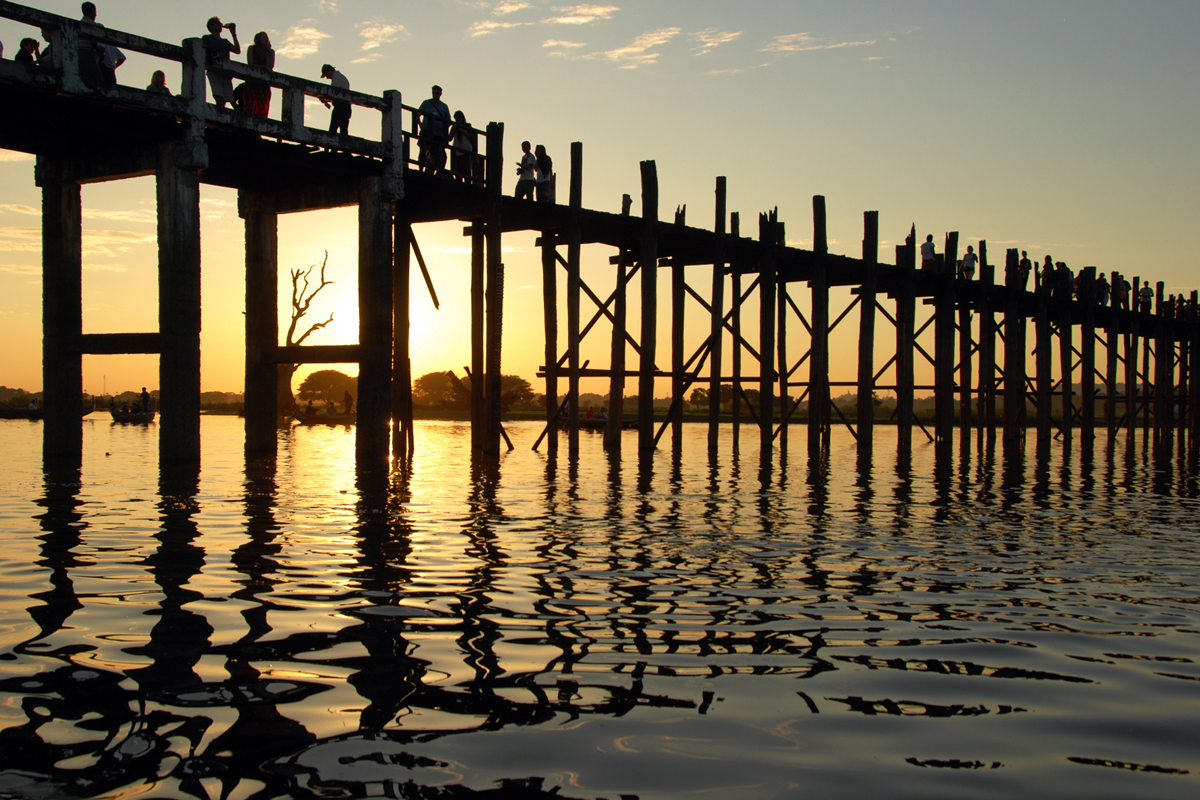 Amarapura, which means «City of Immortality» was once the capital of Myanmar, but it didn't last long. Still there are some evidence from this period, but not much is left of what once was the citadel. A large amount of buildings that were once part of the royal palace, have been remooved. That happened when Mandalay was chosen as the next capital in 1857. It was also the last befor the annexation by the British in 1885. 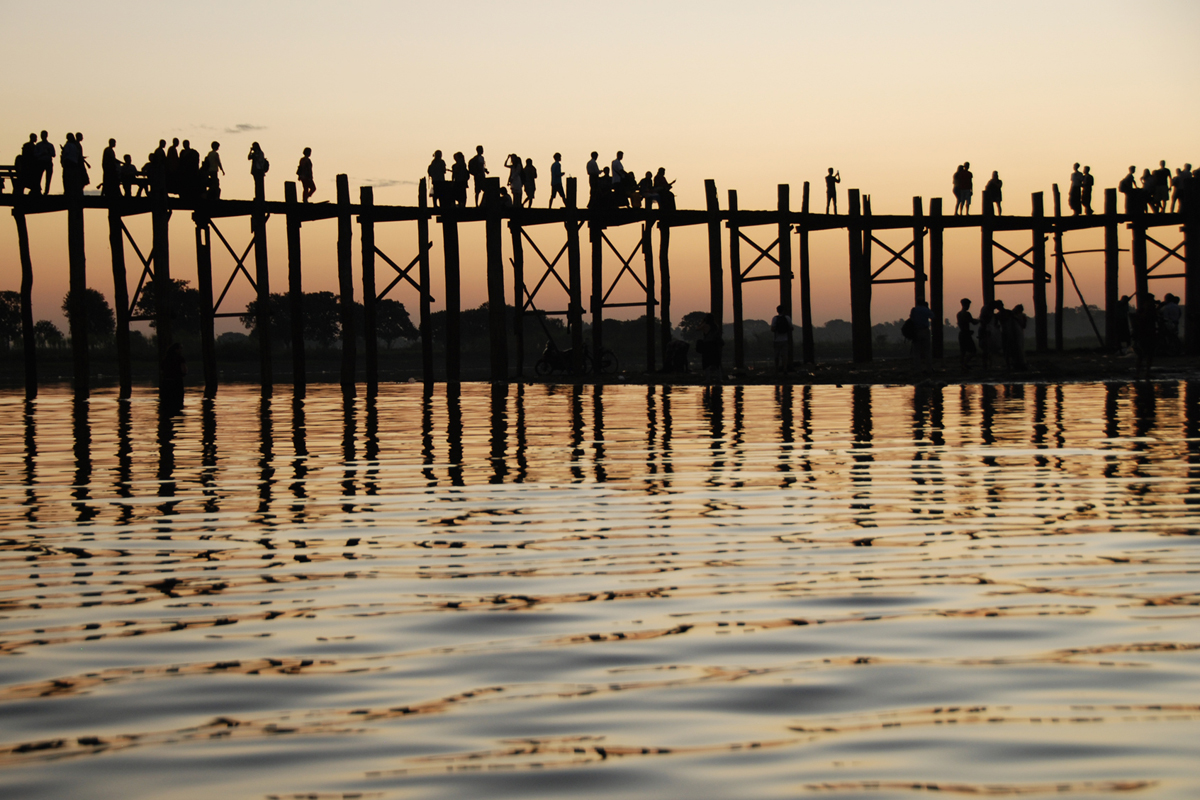 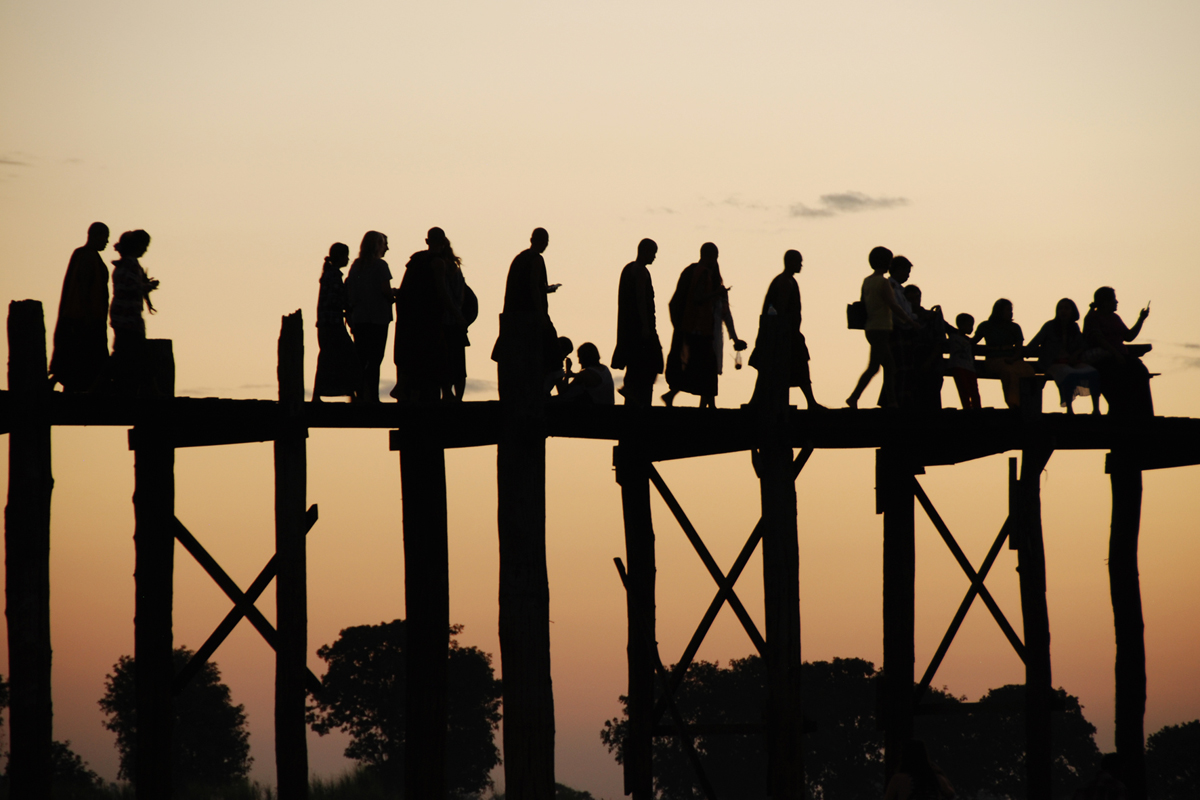 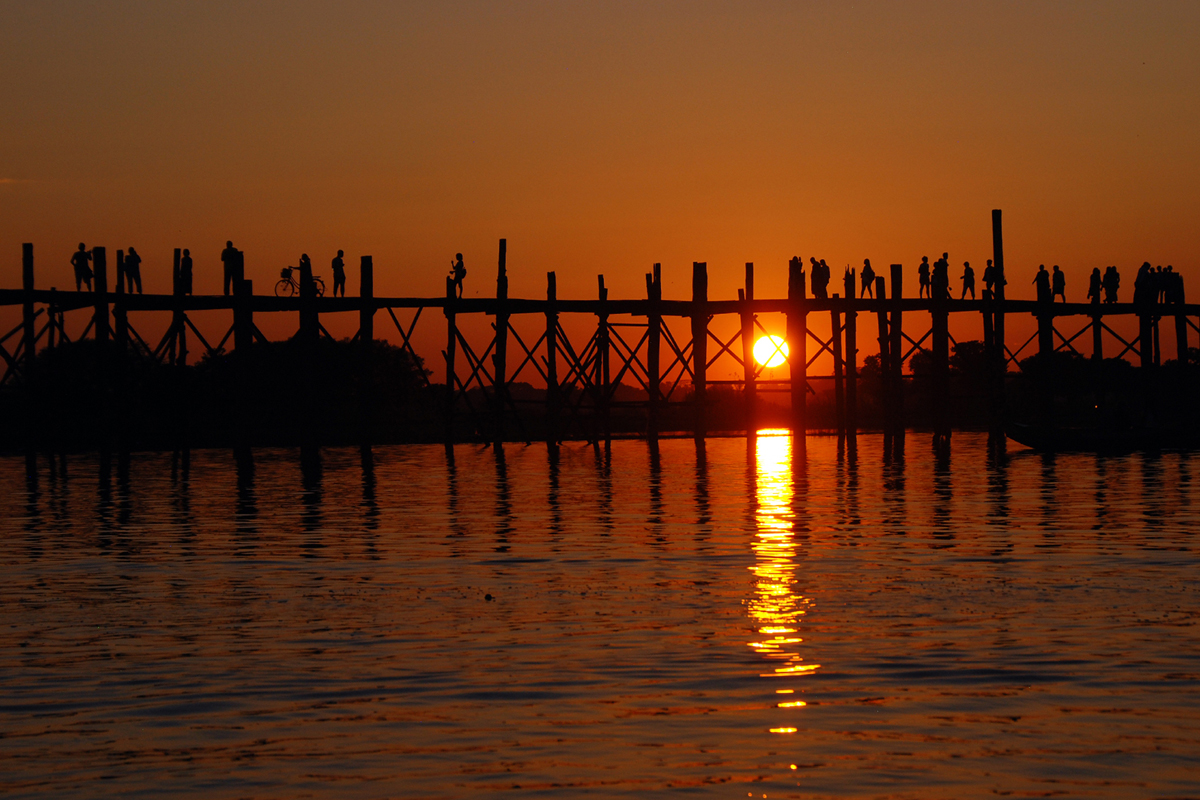 Before we went to Myanmar, we had read that this bridge may be the most photographed spot in this country. There were a lot of tourists so we were not in any doubt that it's a major tourist attraction. Despite all the souvenir stalls and loads of tourists, it was still an amazing experience. It' a beautiful place to be at sunset. I just hope the photos are able to give you that impression.

Those are absolutely awesome photos! I enjoyed scrolling through that, so happily up voted and reblogged. :)

Thank you so much :) I am glad you liked them. The place is awesome. Despite all the souvenir stalls an busses with tourists this place has such calmnes an atmosphere as the sun went down.

Stunning and beautiful photography! 😍 That must have been quite an experience to walk on the bridge.

Thank you so much:) It is a wonderful place, peaceful and quiet even there was a lot of people. But at least most of the people were locals using the bridge to get to the other side.

Beautiful photos of a beautiful place. I loved Mandalay - I'd love to go back to Burma.

Thank you :) Definitly a place I can go back to as well :)

Hiya, @LivingUKTaiwan here, just swinging by to let you know that this post made it into our Top 3 in Daily Travel Digest #993.

Congratulations @digi-me! You received the biggest smile and some love from TravelFeed! Keep up the amazing blog. 😍 Your post was also chosen as top pick of the day and is now featured on the TravelFeed.io front page.