ozchartart (76)in Technical Analysis • 3 years ago

While alts are swiming mostly in a sea of red today I noticed one old coin that seems to be holding pretty nicely.
The good old Potcoin seems to be holding ground!
With the marketcap of POT being only ~175 BTC this is potentialy even a good longer term hold in my perspective, but that one for a diffrent time,
This time I'm gonna focuse on the lower price levels of the chart in order to get some short to mid term targets,
will be going through the weekly into the daily chart in order to do so,
so lets dive right into it.

https://www.tradingview.com/x/qfReMKT7/
As we can see POT was at these price already in the past after which it had an absolutelly massive pump resulting in a new all time high ( you cannot see it on this chart since i want to keep the focuse on the lwoer levels but the all time high hit nearly 9k satoshi).
Now I wanna look for some areas that seem to be important and mark them with lines.

https://www.tradingview.com/x/cANxaOTw/
I've gone from the left to the right and identified some levels which have played a important role in the price history.
As you can see the area between ~60 and 100 satoshi was the level where the lice already was multiple times in the past and was acting as a strong support level. After dropping to those level in Jul 2019 the price was trading inbetwen and after a few months broke up to another level which played an important role in the past, the 200 satoshi one. First time this level was "marked" was all the way back in March 2015, when the price suddenly droped down and marked a local low on the level.
Lateron in 2016 after defending the 100 satohi level the 200 acted as a resistace, which it did again in the bounce in early 2020.
Same goes for the areas around 400 600 and 1100 satoshi, all have been used as supports and resistances fromm which the price made a turn in trend.
To get a clearer view and pull a fib i will zoom in to the daily chart.

On the daily it's more clear how the price used the levels up to ~600 satoshi and progressed through them to where it is now (at ~80 satoshi).
I used a fib retracement pulling it from the top of the recent bounce in February to the Local bottom it made in November 19'.
We can see that the 96sat line closely corelates with the 0.236 fib line.
The price went bellow it but at the moment is still in a what we call higher low, above the ~60-63 satoshi low it made, which if broken to the downside would make me reconsider this trade.
At the moment the 92-96 satoshi area acts as a resistance which if broken would for me confirm further uptrend.

Next I wanna focuse on the 400 satoshi area which once again closely corelates with the 2.618 fib line which is residing in this case on 413 satoshi.
This area (400-415 satoshi) would be my primary target for this trade!

Lastly we have the 600 line which is in the midle of the 4.236 and 3.618 fib lines, this one not being that closely corelated, but historacly seems to be a important area, if 400 satoshi hit, i would leave a small stash incase we see a further spike up to 600.

And to show aprocimetly what I expect with some arrows:

Let me know what you think about Potcoin, does it still have a chance or do you consider it dead?

Please keep in mind, this post is NOT financial advice or any kind of recomandation, nor am I lisenced to give one!
It is my personal opinion and view on the chart!

Potcoin is a classic. Glad to see this.

Thanks for keeping the charts dank with Potcoin! 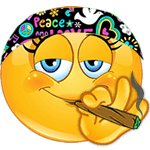 My observation from past performance is that most pot cryptos tend to pump around thesame time.So if one is moving, it be good to find a potential one. Nice TA and explanation @ozchartart