Playing with Logic Pro to record a flute cover of The Gael, Promentory from The Last of the Mohicans

I've been recording my music using the free GarageBand for a while now. But recently I've decided to upgrade to Logic Pro X so sold some Bitcoins to make the purchase.

Why did I went from GarageBand to LogicPro?

For Apple computer owners, GarageBand now comes for free and it can do practically all you need in terms of music production. Most (probably all) the stock plugins from Logic Pro are available in GarageBand, you have all the Apple Loops and virtual instruments too. With that you can do a lot, some professional music producers are using GarageBand and are producing amazing work.

So why did I upgrade? There are several reasons but here are the three main ones were

But before we continue, for those who don't want the details here is my latest work.

The Gael (by Dougie MacLean), Promentory from The Last of the Mohicans. Quenacho and Panflute cover

I recorded this cover in Logic Pro using a mixture of virtual instruments (piano, strings, drums, bass), real instruments (Quenacho, Panflute& shaker) and vocals. The real instruments and vocals were recorded on a Shure SM58 dynamic microphone. I also own a Rode NT-1a but I prefer to use the SM58 since my room is currently untreated and the SM58 has better side and rear audio rejection minimising the recording of room reflections.

Some of the reasons for the upgrade

So here is a list of some of the reasons I decided to make the jump and purchased Logic Pro from Apple.

I'm not a great live musician, I regularly waste a lot of time recording a single track because I make many mistakes and keep recording again and again until I get everything to an acceptable level. GarageBand allows you to record multiple takes (punch in). However, every time you make a new take, the re-recorded section is getting replaced. Logic Pro however, will create a take folder that will show you all the takes that have been recorded and you have the ability to create a composition by selecting different sections from each of your takes. 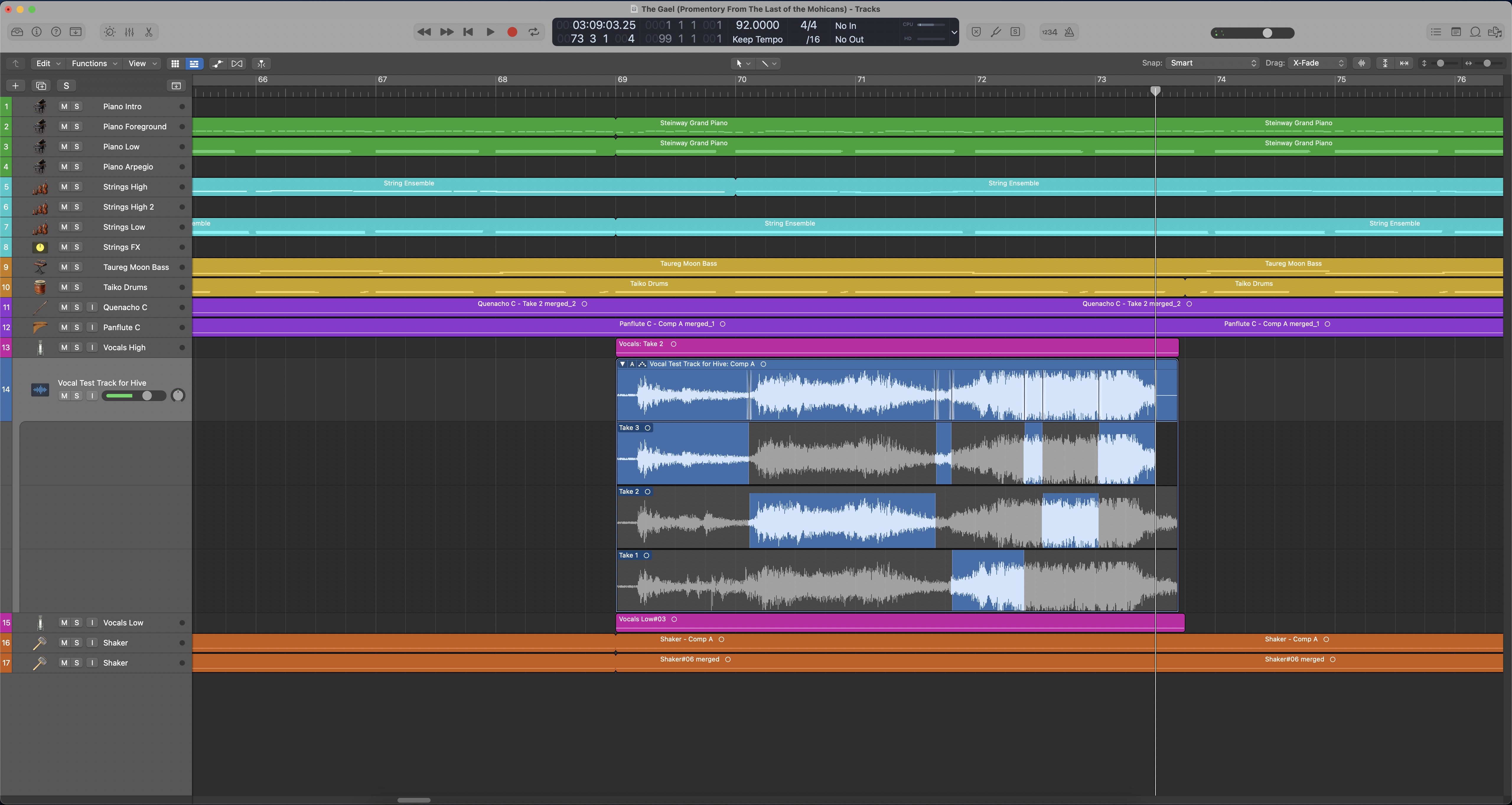 What this allows me is record the whole track from start to end without worrying of the mistakes I make. Then I'd do a few more takes and just listen back to each of them and select the best sections from each of the takes. This could be for getting rid of plosives at the beginning of a phrasing or a better vibrato at the end of another.

GarageBand was designed for simplicity, a way for beginners to start into music production. Stock plugins, despite being of great quality, comes with very small amount of parameters. That's good at the beginning but as you get better you want more control and more customisation and that's where Logic Pro more complex UI will be better. Here is for example the stock compressor from GarageBand (left) vs Logic Pro (right) 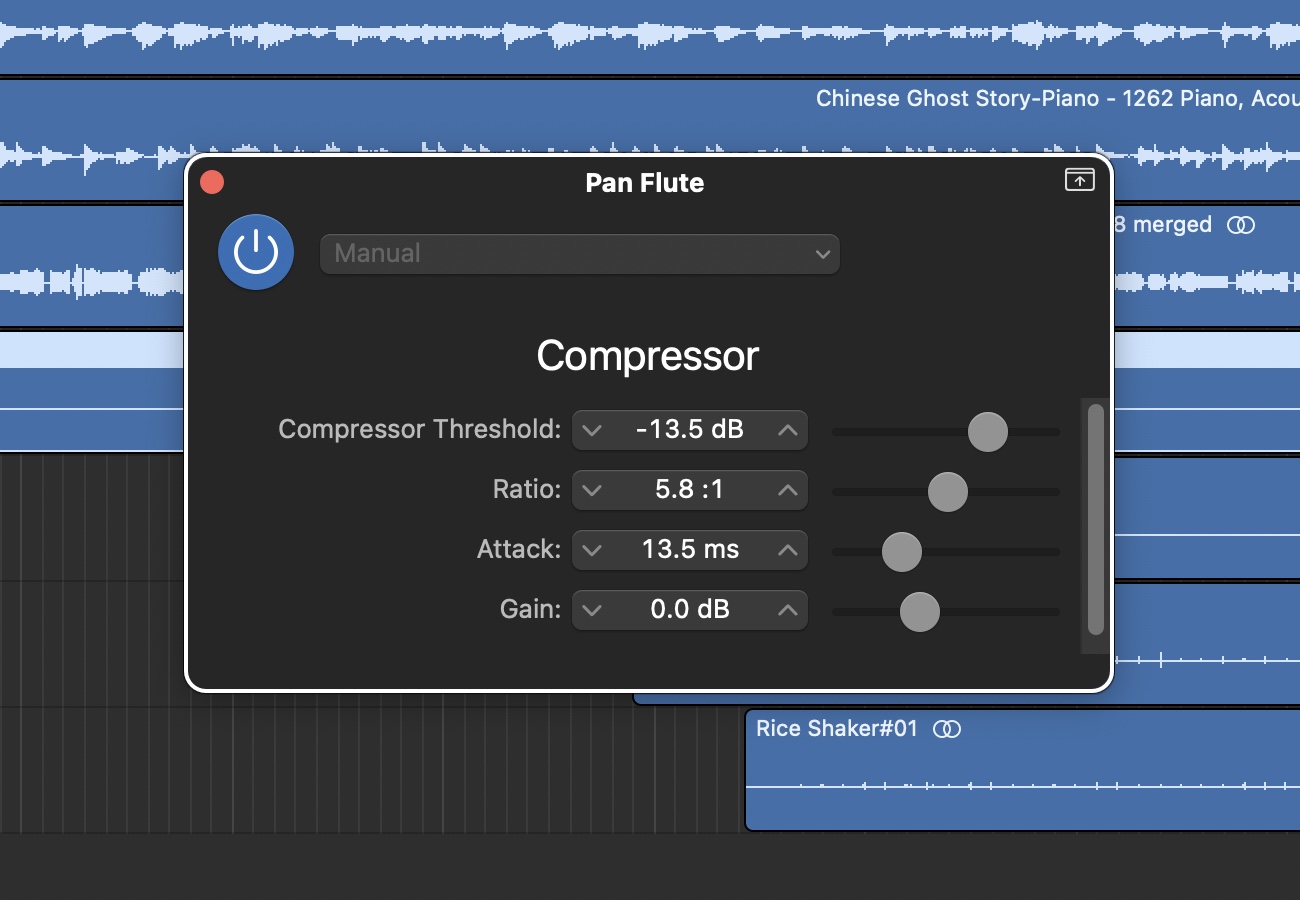 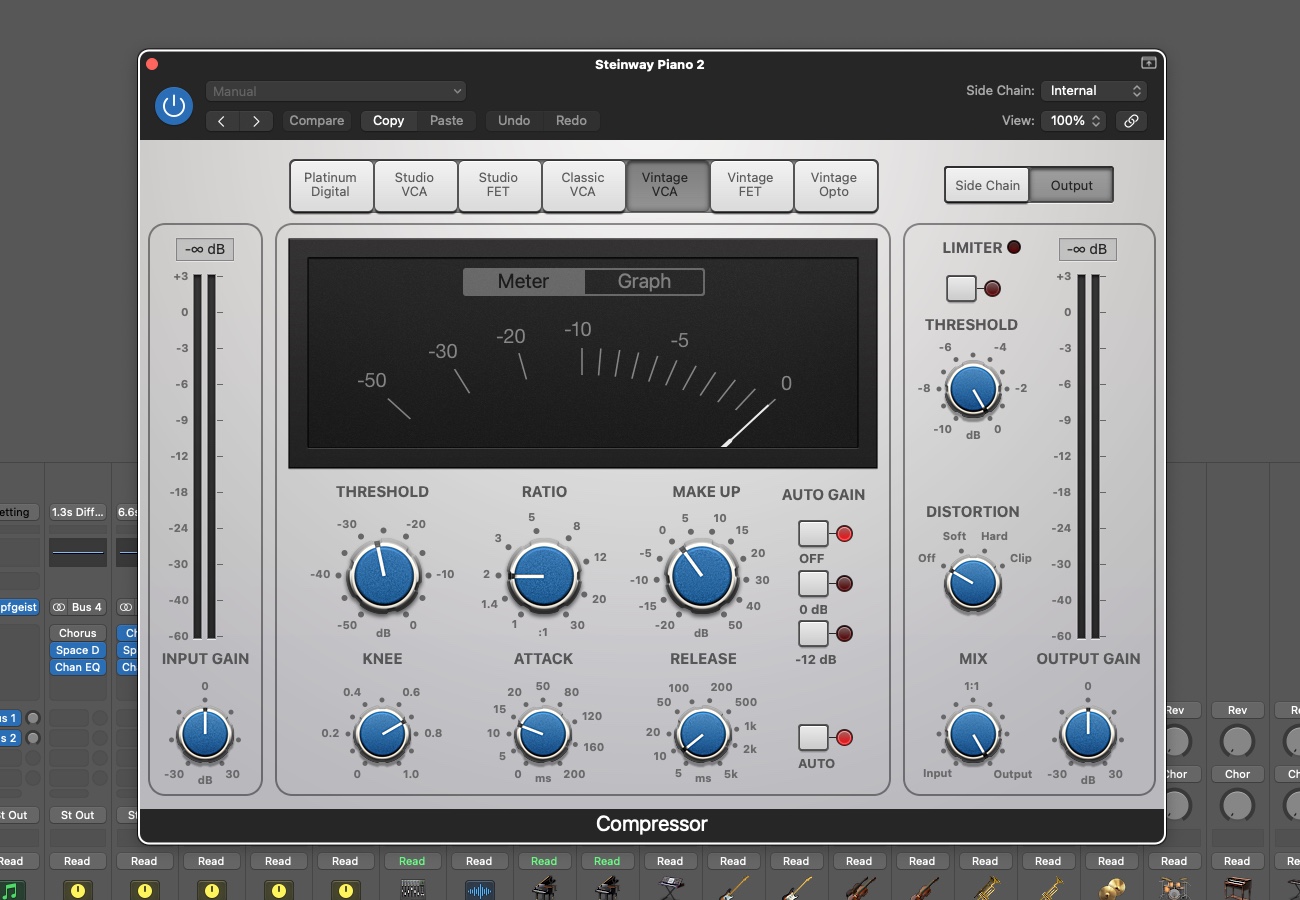 You don't have buses in GarageBand, so if you record say 5 different vocal tracks (lead + harmonics for example), if you want to apply the same effects to each of them you will need to apply each of the effect to each of the track and replicate the configuration each time. You can save presets and load them but it's still taking time. With Logic Pro, you can send the audio of each of the vocal tracks to a common bus and apply the effect on that bus. This saves time but also reduces CPU load on your computer. Batch processing also allows you to apply the same effect or adjust the same settings to all selected tracks at once.

Also adjust GarageBand only comes with a horizontal mixer with panning knob and gain fader at the beginning of each track. Logic Pro on the other hand has a vertical mixer with a layout very similar to a hardware mixer. I find it easier to check the level of each track this way.

I'm fan of Izotope plugins especially their Ozone 9 product which I use for mastering. I recently upgraded to their Music Production Suite 4.1 benefiting from their loyalty offer, so I paid $299 instead of $799. That gave me access to Neutron (mixing plugin), Nectar (vocal effects), NeoVerb (multi-layer reverb), RX 9 (audio repair) and a bunch of other great plugins.

Some of those plugins however are not 100% compatible with GarageBand and would lack of features such as presets. Once upgraded to Logic Pro, all was working great. This issue comes from GarageBand way of allowing 3rd party plugins to access some area of the file system.

If you are collaborating with someone else or want to send your tracks to a professional mixing or mastering engineer then you would want to consolidate your tracks, i.e. export them with each track starting from 0 on the timeline. GarageBand does not have an easy way to do this, you can solo a track and bounce it and repeat though.

I bought an El Cheapo Donner SpacLine DMK25 MIDI keyboard and could map all of the keys, faders and knobs on it via LogicPro while with GarageBand I had to install extra app on the computer to get certain keys to to function. 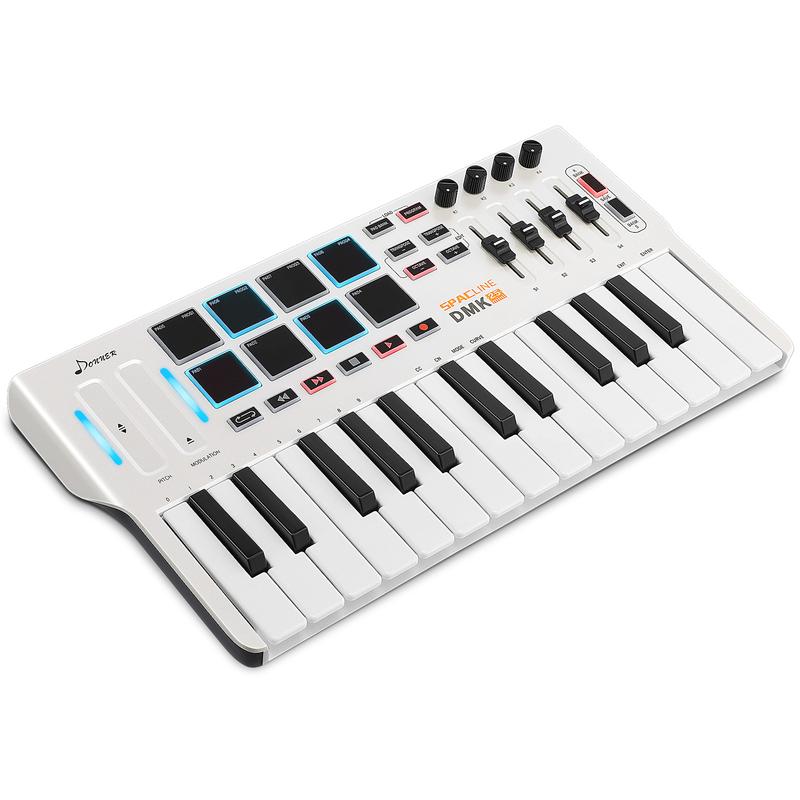 Price and ease of use

Despite being a professional grade DAW (Digital Audio Workstation), Logic Pro is quite affordable when compared to other DAWs like Pro Tools, Ableton Live, FL Studio. An even cheaper alternative is the very popular Reaper which comes with a greatly discounted price for non-pro users or pros that earn less than a certain amount. But the compatibility with Izotope plugins and the fact that Logic Pro shares a common UI interface with GarageBand made me choose it for ease of use.

These are the main reasons that got me upgraded to Logic Pro from GarageBand. Logic Pro has a lot more features which I'm progressively discovering and using and each of them are just bonus. I can even load my GarageBand projects and convert them to Logic Pro projects.

You can sing to so many instruments, this is awesome! How long did it took you to learn how to play?

Cheers.
I started playing the keyboard and guitar on and off from around 2000. Then Ukulele from around 2010 maybe. As for the flute I started learning how to make and play them about a year ago, having learned the recorder in high school did help a lot.

So you have quite a history, impressive! Is ukulele hard to learn? It looks so easy when others play on it.

I guess it takes a special kind of wood for making flutes?

I've never been stable with my hobbies, changed quite a few times. But it's good, learned new things every time. No instrument is really easy but some require a less steep learning curve than others. The ukulele is much easier than the guitar (less strings so less fingers involved, some chords only require one finger) and is very social, back in the UK, there were weekly meetups in London pubs where you get 30-40 people playing Ukulele all night together.

You should be able to play a basic song in a week or two, for example Jambalaya or Tom Dooley which have only two chords. Later on you'd learn more complex chords and more interesting strumming patterns.

For sure I will want to try this, especially that this is an afordable instrument. Your cover is so cool, you also have a great voice as well🤩. I would be a little shy putting myself in front of camera and sing, it would be a challenge for me. But who knows, I might just give it a try, I always loved the idea of trying out music stuff.

By the way I have found a lot of types of ukulele. What do you think about this one?

Tenor, soprano....which one to pick?

There are soprano, concert, tenor and baritone ukuleles. Soprano being the smallest and having the brightest sound while baritone are the largest and warmer/lower sound. The soprano is the most popular and it’s sound is the one you will usually recognise the most. The baritone one has a sound that is almost a guitar. The concert and tenor sits in the middle. Mine is a Tenor uke. There is no wrong choice. Best would be to go to a store that sells both and give them a try and see which sound you prefer.

Here is the same song played on soprano and tenor ukuleles:
Soprano. Notice how you can’t see my face in this one. It was one of my first YouTube video and I was like you not comfortable showing myself on camera.

This was so nice to listen, you gained a new Youtube subscriber haha. I like the sound of the tenor ukulele, it sounds more mellow somehow. And you gained more confidence in your voice in the second video.

I saw that there are wooden and plastic ukuleles. I saw bass and acustic ones too. Very interesting.
I will look at your channel and watch more.

You have a lot of patience to teach this, I think this can help many " I want to play an instrument" enthusiasts like me

This is an outstanding piano playing. Also many beautiful flute playing and flute tunes. Really awesome. Superb recovery !!! I looked at all the elements constituting your post and when I saw the word Apple I understood that I could not use the same tool using windows I still look at your post to the very end. by listening to the music you are playing. I also like to play music and I work on compositions which at the moment are only in an experimental stage. I invested in a microphone I have the computer and the instrument I lack a software to suit my project. Thank you for this excellent cover you managed to restore all the livelihoods of the original song. I do not know if in your private life you have this activity as a professional but you have a lot of talent.

My brother, you are really a very talented artist, I really admire the musical instrument you play...
I want to try it someday

Technically I cannot give an opinion about your music. But I can tell you that I like to listen to it very much. Also the video you've made with you playing the different instruments and singing I find great.

I can't upvote with much more than I did because I haven't got enough Hive Power yet but I'll dedicate my !LUV for today to you! I hope you're happy with it. It's a thank you for upvoting my post generously as well :-)

Musical digital is a closed book to me, but I found your music track is soothing that I replayed it. I am learning piano by myself, and I think your post are interesting. Thank you for sharing those useful knowledge.