Unsolved Mysteries Of Science : Quantum Mechanics And The Paradoxes Of Our Physical Reality 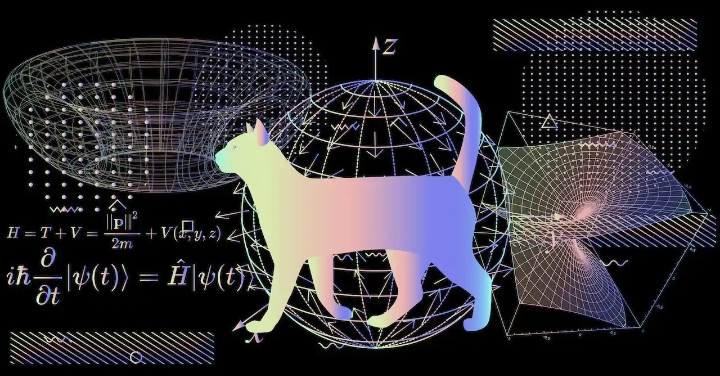 Quantum mechanics is considered one of the greatest theories of physics ever produced by man alongside general relativity, this is because all it's predictions have been confirmed with great precision and it accurately describes events in the atomic world. Despite it's success, it poses mysteries that till today science cannot resolve, especially the nature of our physical reality and it stems from how we interpret the theory - quantum mechanics, from a physical perspective.
At the heart of quantum mechanics is it's probabilistic nature, this suggests that the atomic/quantum world is inherently nondeterministic - unpredictable, but we know that the classical/macroscopic world is deterministic - predictable, and this presents a puzzling question which is, what is the nature of reality as a whole ?, Is it deterministic or nondeterministic ?

Some scientists and philosophers including some early founders of quantum physics such as Albert Einstein and Erwin Schrödinger doubts/doubted that quantum mechanics is/was not a true theory of the quantum world despite it's successful predictions, they believe that the true theory of the atomic world is yet to arrive and that if it arrives, it would be a deterministic one, so that it corresponds with the classical world. However, till today, no new theory has been able to completely eliminate the nondeterministic nature of the quantum world, though research is still ongoing.

There are other aspects of quantum mechanics that raises puzzling questions, an example is the wave function - an abstract mathematical entity used to represent particle states and calculate quantum probabilities. Electromagnetic wave functions have a corresponding physical entity which is the electromagnetic wave (light), likewise every other physical waves but it is not certain if the wave function in quantum mechanics has a corresponding physical wave. It is for now a philosophical debate, some say it has while others say it does not.

This interpretation is one of the oldest and the most accepted interpretation in the scientific community, this is because it directly (without further addition of concepts) accounts for why quantum mechanics is probabilistic - it strongly supports the nondeterministic nature of the quantum world. In the classical world, equations can be used to predict the future outcome of an event, measurement/observation is only done to confirm the prediction as per the standard of science but in the quantum world, equations aren't enough to predict the future outcome of an event and it is due to the fact that the equations of quantum mechanics predicts particles can be in multiple states at the same time when only a single state at time is expected. According to the Copenhagen interpretation, a particle is initially in multiple states in a universe and when measurement/observation is made, the particle "randomly" takes a single state and other states collapses/varnishes. By random, it means that any state out of the many states can come into existence and this means that theoretically we cannot tell with certainty which state is going to come into existence, it is only observation that can decide. But, we could try using statistical/probabilistic approach, only that our prediction would be less than 100 per cent certain, it is only in classical physics that predictions are very close to or equal to a 100 per cent certainty.

Also according to the interpretation, the wave function does not have a corresponding physical wave, it is merely a mathematical tool for representing states and calculating probabilities. The double-slit experiment seems to support the Copenhagen interpretation but from a logical perspective, this interpretation seems absurd as can be seen from the Schrödinger's cat experiment - a thought experiment that places a classical entity (a cat) in a quantum event. 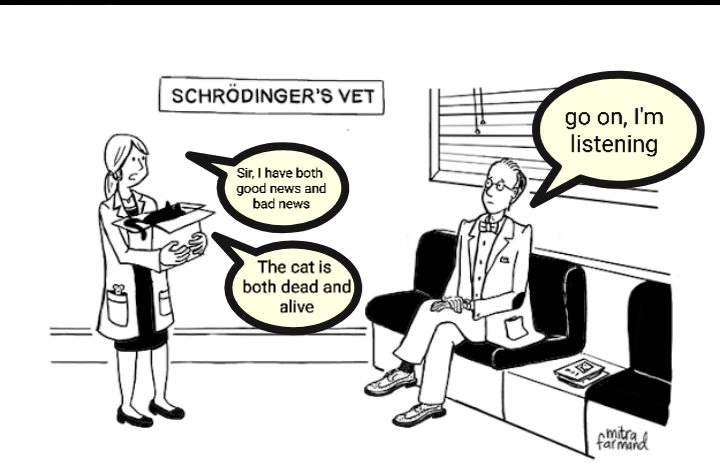 This interpretation also raises other puzzling questions like, what really is an observer ?, Can an observer be unconscious ? - like the measuring instrument or nonliving things. 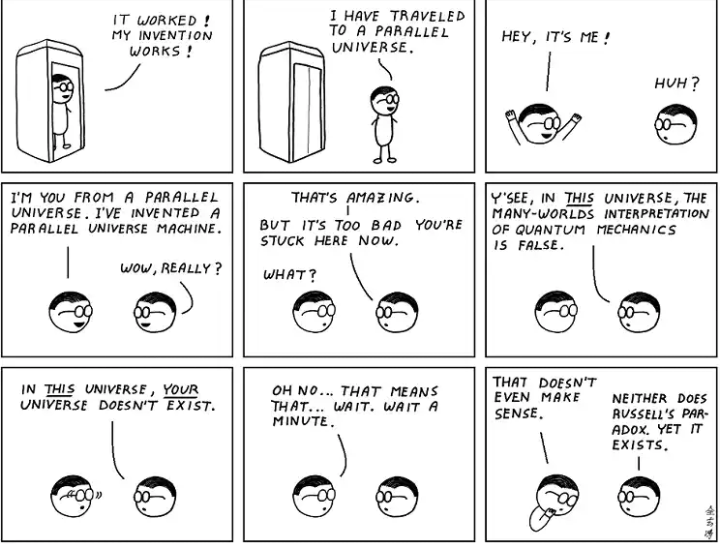 The many worlds interpretation suggests that quantum events are actually deterministic but the theory it is trying to interpret - quantum mechanics, suggests otherwise - nondeterminism, the question now is, how do we reconcile what both says ?

In order to resolve this issue, another concept known as quantum decoherence was introduced, this new concept brings back the idea of observation causing collapse to a random state, which in turn gives rise to nondeterminism but it is, according to the many worlds interpretation a false belief appearing as a true act (observation causing collapse to a random state) and it is due to quantum decoherence, it is the Copenhagen interpretation that treats the collapse to random state as a true act.

We should note that the double-slit experiment seems to also support the many worlds interpretation.

This interpretation was first proposed by Louis de Broglie in 1927 and later extended by David Bohm. This interpretation is not only an interpretation, unlike the previous two, this interpretation is also another formalism of quantum mechanics - it's equations are different from that of standard quantum mechanics. According to this new formalism, the wave function is associated to a real wave just like the electromagnetic wave function is associated to the electromagnetic wave, this quantum wave guides the motion of the particles and the state of the particles can be predicted using what is called a "guiding equation" which is the nonlocal part of the standard wave equation - Schrödinger equation. 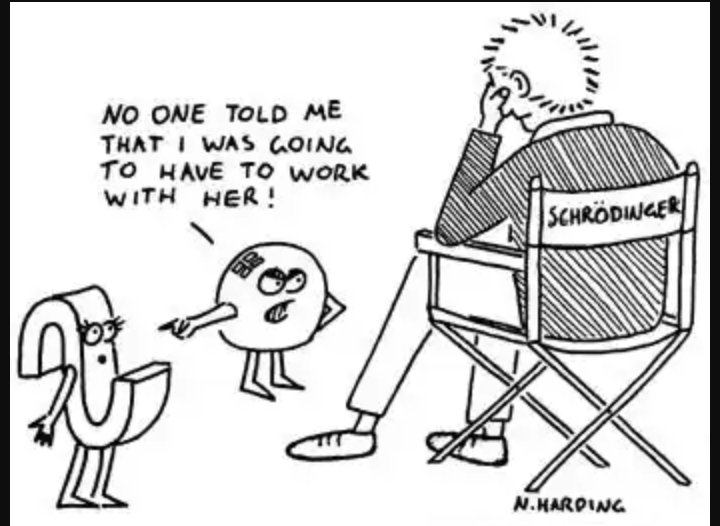 This new formalism suggests the quantum world is deterministic but there's a problem, which is that for the guiding equation to predict the next state of the particle, it's initial state must be known. Unfortunately, the initial state is not always known and this brings into play nondeterminism, in this case one begins to discuss about conditional wave functions and how it apparently leads to observation causing collapse to a random state. We should note that this new formalism also predicts all what standard quantum mechanics predicts and it seems to be supported also by the same double-slit experiment, especially when it comes to the concept of wave-particle duality observed in the double-slit experiment.

The interpretations discussed above are the oldest and very popular ones, there are many others and as physicist David Mermin puts it,

New interpretations appear every year. None ever disappear.

What is so surprising is that the same experiments seems to support most of the interpretations, which means no interpretation can rule out the other, it is now a matter of choice for us - you can pick whatever interpretation that suites you, as far as it is self-consistent. However, this presents another puzzling question which is that, is reality objective or subjective ?

Experiment which is supposed to be based on objectivity is now supporting different views - subjectivity, and a subjective reality can only exist if consciousness exists. Another way quantum mechanics shows consciousness could be very essential in the existence of reality can be seen from the different interpretations themselves, they all take into account directly or indirectly, observation causing collapse to random state to account for nondeterminism and observation is mostly done by us, the supposed conscious entity, whether directly or indirectly.

Whether reality depends on consciousness or not cannot be answered now by science and in fact, the question of whether reality is objective or subjective has been in existence long before modern science or quantum mechanics came into existence, it has and still a philosophical topic. At the quantum world, existence of reality seems to be strongly dependent on consciousness but at the classical world, it is otherwise and at the same time, consciousness is yet to be understood.

Whatever the answers to these weird questions might be, we would have to wait to find out, that is if the answers to such questions exists - the universe seems to be inherently paradoxical.

It is here we conclude this article, have a thoughtful day and see you next time.

Thank you all once again for stopping by to read my jargons and also thank you @juecoree, @discovery-it and the @Steemstem team for your valuable supports.

It was a lot to take at once, but it was an interesting read. The different interpretation gives us a perspective on how we should view this concept and apply it. Enjoy a slice of !PIZZA