Tarantula: What is the difference between the old and new world tarantula? The "old world" encompasses the tarantulas found in Asia, Africa, Australia, and Europe, inhabited before discovering America in 1492. Many tarantula keepers dislike the behavior of old-world tarantulas. It makes them so unappealing to become pets. When provoked, nearly all tarantula species in this area are known for their speed, aggression, and willingness to bite. They have an unfavorable personality that impossible to handle or communicate.

Their primary defensive mechanism is through biting and subduing prey. These spiders are far less docile and are far more likely to attempt to bite us. Although we don't know the extent of effects of its venom; hence it is not thoroughly investigated. Some researchers suggest that their venom is potent than their new world counterpart. When someone receives a bite from the old-world tarantula, a high chance of hospitalization occurs due to localized pain, swelling, and fatigue. In the worst case, they can get severe muscle cramping, labored breathing, and fever, which can appear days after the bite. The Indian violet earth tiger has a beautiful coloration and patterns, which researchers discovered in 1899 in India. It is the most attractive spider among the Chilobrachys genus. As a result, many people smuggled the species to Europe and America. These tarantulas are fossorial and favor to reside in deep ground holes, but they are heavy webbers. If we placed it in an enclosure, it creates an intricately webbed, spend a lot of time in and around. We can place feeders around the perimeter of this web to lure it out. These arachnids seem charming and beautiful, but being old-world species and members of the Chilobrachys family, they are known to be aggressive and defending, so extra precautions should be taken when dealing with them, as with other old-world species. Poecilotheria Metallica has a distinguishable metallic blue coloring pattern from Southern India. The Poecilotheria genus is a class of spiders with distinct colors and patterns. Locals called it Gooty tarantulas that refers to the railway timber yard in Gooty. In 2001, these tarantulas rediscovered in a forest between Nadyal and Giddalur. Many people smuggled these spiders to Europe and Asia due to their vibrant coloration and pattern. Besides, the Gooty tarantulas are the most sought-after species in the tarantula community.

Urticating hairs cover the abdomen of tarantulas. When attacked or disturbed, it kicks the urticating hairs off their body with startling precision in the direction of their assailants. These hairs irritate an animal's skin or eyes by embedding themselves in the skin or eyes. The clout of small hair causes swelling to the attackers due to chemical interaction with the skin and mucous membranes to the urticating hair. The Goliath birdeater is the king of spiders, which can weigh up to six ounces and a foot leg span. It is the sizeable arachnid known to man, which inhibited Brazil, French Guiana, Suriname, and Venezuela. In 1870, Thorell classified it as the Theraphosa genus. When considering Heteropoda maxima (not a bird spider) and the Bolivian Pamphobeteus Antinous, this isn't entirely accurate. When a Goliath hunts for prey, its inch-long fangs pump neurotoxins to hapless prey. When provoked, the Goliath spider won't hesitate to lose its stinging setae or begin stridulating in a threatening posture. Its urticating setae are effective against primates. It stayed in its burrow throughout the day. They'll be visible at the opening of their burrow at nighttime. The Chilean Rose-haired Tarantula is one of the most docile and hardy spiders kept in captivity, which comes from one of the world's driest desert habitats, the northern Atacama Desert area. It has dark bodies with rose-hued hair. Its fang folds under the body to strike downwards when attacking its prey. It has an average size of 12 to 13 centimeters in leg span for females while 9 centimeters for males. It has a long lifespan, which females live up to about 20 years. These tarantulas require very little space and are usually active in the evening. It is good-natured and handleable but caressing and holding it can cause stress to it. The Curly Hair Tarantula refers to the Nicaraguan Curly Hair (true form) and the Honduran Curly Hair (curly hair). It is a terrestrial, semi-burrowing tarantula, which we can locate in the tropical rainforests of Honduras, Nicaragua, and Costa Rica. It lived near rivers and at the bottom of trees. In captivity, it can grow up to about 15 centimeters and can live up to 20. The curly hair tarantula preys on insects and small vertebrates. It injects venom to its prey using its two hollow fangs. Although its venom is harmless to humans, the urticating hairs they can kick throughout their hiding place are not safe.

Note: The cover image of this post is created by the author using Canva.

This is such an interesting article! Thank you so much for sharing this. I still suck the terms of tarantulas right now even though my brother collects them. Anyway, stay safe always!

Hi from my brother's PMET 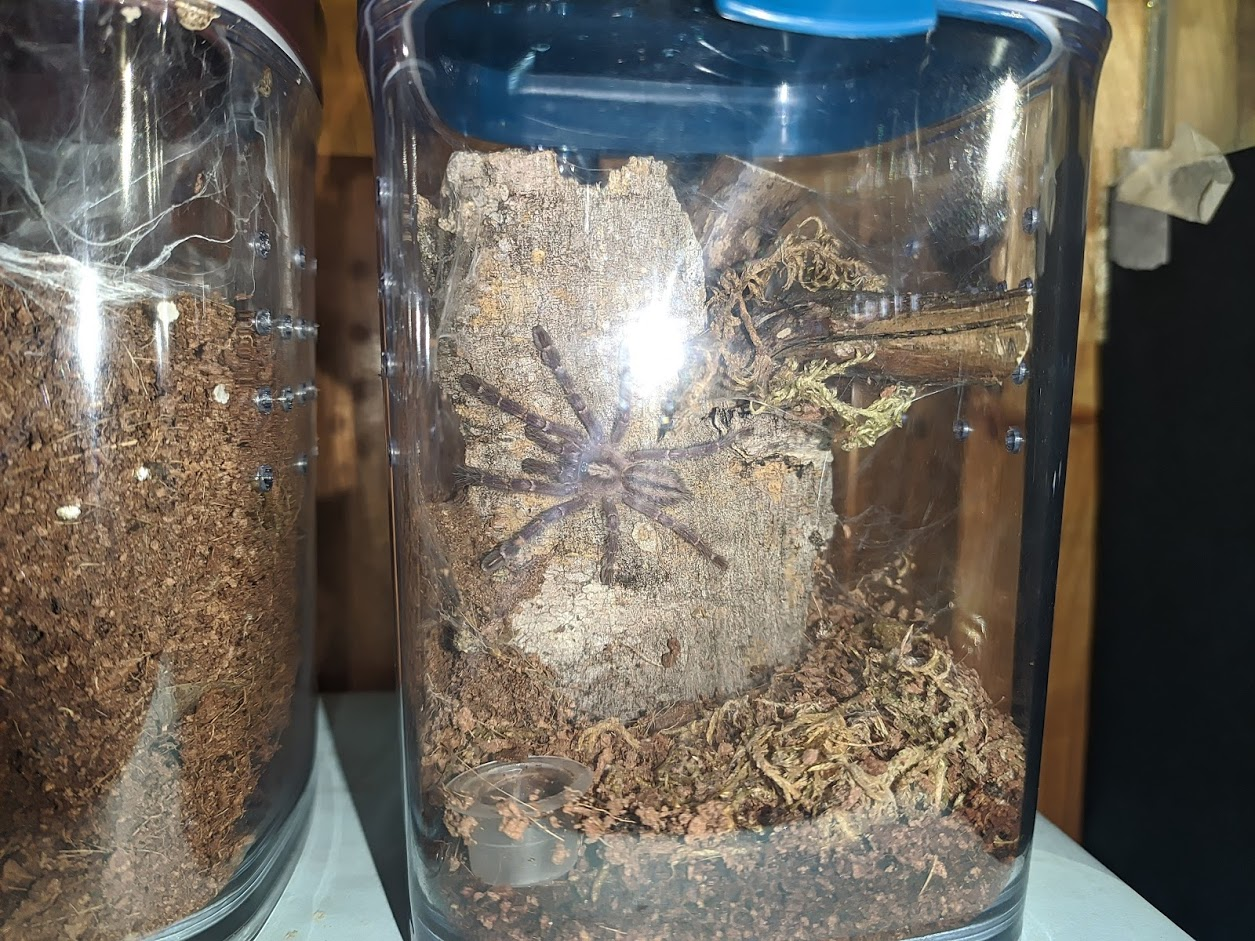 The spider looks cool. I also read your previous blog on tarantulas and your pets. Keeping some spiders at home really need delicate care. Thank you for your engagement, @sgbonus!

They are really interesting creatures. I always love the feeding part. That's really true, I actually bought one and it's still on its way. It's going to be my first tarantula. But if I can't handle it, I'll probably give it to my brother heheh

I have the same thought before. When I did the research, I was amazed to know that there are differences between the two tarantulas. Thanks you for your engagement, @jfang003!

Just wondering but what caused you to want to look into tarantulas? I personally never wondered about it so I am curious.

I quite curious with it. My uncle has tarantulas and I don't really know why he love petting one. He offered me to have one but I did not accept though. I'm not sure with what should I do with that. I did see a lot of people selling and petting tarantulas online.

I don't know anyone personally who has a tarantula so I would of never considered the topic so thanks for sharing your experience.

Excellent writing on these fascinating arachnid specimens. Very good information and you selected very good images my friend. I never really gave importance to this topic about the tarantulas of the old and new world, so as a lover of arthropods, I really enjoyed reading it. Thank you very much for sharing, best regards.

Before doing some reading on the old and new world tarantulas, I thought all tarantulas are the same. I was amazed that there are a significant difference between the two species or class. Appreciate the gesture of engaging in my post, @abneagro!

That's right, the differences have probably been granted by adaptation to different habitats, climates, among others, all part of evolution. Greetings my friend.

Yes, tarantulas are spiders. It is a large and hairy variety of spiders. As you mentioned, they do have similar morphological characteristics.