Another Must See Video Highlighting American Culture in Decline...

You're not being downvoted for what you believe in and this response has nothing to do with the content or opinions presented above. I'm downvoting because you're a thief and a liar and evidence of that can be found in this post.

Your approach now is more like a form of entrapment. It seems like your intention is to create the illusion you're being downvoted for believing something. It seems like you're attempting to manipulate the general populace into receiving your message, taking it at face value, with the hopes Hive's property value will decrease and Blurt's property value will increase. In other words it seems Blurt is attempting to build a social network upon a foundation of manipulation, similar to a cult, and utilizing unethical marketing practices to achieve that goal.

Luckily you've left a trail of breadcrumbs leading to the truth and locked it all into several blockchains over the span of several months. Any false claims you make can easily be disproven.

All this is is another example of Blurt's marketing campaign. It's full of lies, deceit; shades of smear campaign shine brightly. Even going so far as to steal artwork, taking it out of context then weaponizing that stolen property; using it to help create the illusion members on Hive are evil. Akin to grabbing a scene from a movie where someone is getting murdered, pointing at several members of Hive, accusing them of murder, then claiming the scene from the movie is evidence that murder took place.

Ask yourselves what makes Blurt stand out above the rest. How can Blurt take the credit for championing free speech in this instance? That video is located on Youtube and you can see several people openly expressing their views, as it should be.

That's about as mainstream as it gets these days.

Applying your logic dictates Youtube stands for free speech. Not Blurt. Blurt is simply taking from Youtube with this example. Hijacking their consumer base in a sense. And doesn't it seem a little strange this post is on Hive, completely uncensored, while attempting to create the illusion something like this wouldn't be allowed? Everyone is free to come and talk about it all they want as well.

Why are so many things not adding up when it comes to your delivery in its entirety? Bullshit perhaps? Ulterior motive?

And where's the 'freedom' on Blurt? You've had to go from being a travel blogger and photographer to presenting this sort of information in order to fit in, be accepted, and make money. How can it be called freedom when being yourself isn't enough? There's no value in a echo chamber, nor is there any freedom, but that's Blurt, in a nutshell.

P.S. I've always enjoyed how Hive members downvote charlatans. Helps create peace of mind when it comes to my investment.

Fun Fact: The author above posing as someone who stands for free speech once saw a conversation where two gentleman were joking about a piece of glassware, became incredibly offended, and used snippets from that conversation which took place on Hive to help further his agenda of making Hive members appear evil. That's right. A conversation about a cup mainly comprised of ridiculous jokes was deemed to be incredibly offensive and far too heavy for society, according to the author @world-travel-pro.

How does this comment of yours relate to the article above?

As I read below, you say that your property was stolen?
If so, you could bring a case to give the person in question figures on
a.) what the value (money/tokens) of the stolen property is, which is calculated by you
b.) present it to the person concerned
c.) if there is no response, take legal action to prove the value of the stolen material and the estimated damage caused to your art, brand or name. I assume this is the number of artworks you have not sold since (or have not been voted for, for example).
d.) the other party then gets themselves a lawyer if they want to. Or not.
e.) finally, if no agreement can be reached, it goes to court. Things are then settled there.

Otherwise, if you do not present any damage in figures regarding your business, the other person cannot respond accordingly.

Keep typing, you are hilarious.

For the record, all I could be on Hive was a boring travel blogger, I would have gotten down voted off the platform years earlier for sharing my opinions, obviosly why I did not.

Blurt is not only way more fun and engaging it s a total god send, just not your god; you demon faced fuck.

Now I cast you back to hell where you came from!

In the name of the father, the son, and the holy sprit.

~ turns the other cheek ~

You just kiss ass and fake sincerity there as much as you did here.

And look how the "bigs" reward him for it too. Then they address me as if I want to be legitimately back earning on the Hive Satanic Network. hahaha
Now that I'm fully aware of what this place is all about, taking their money now seems more like taking a one way ticket straight to hell! lol 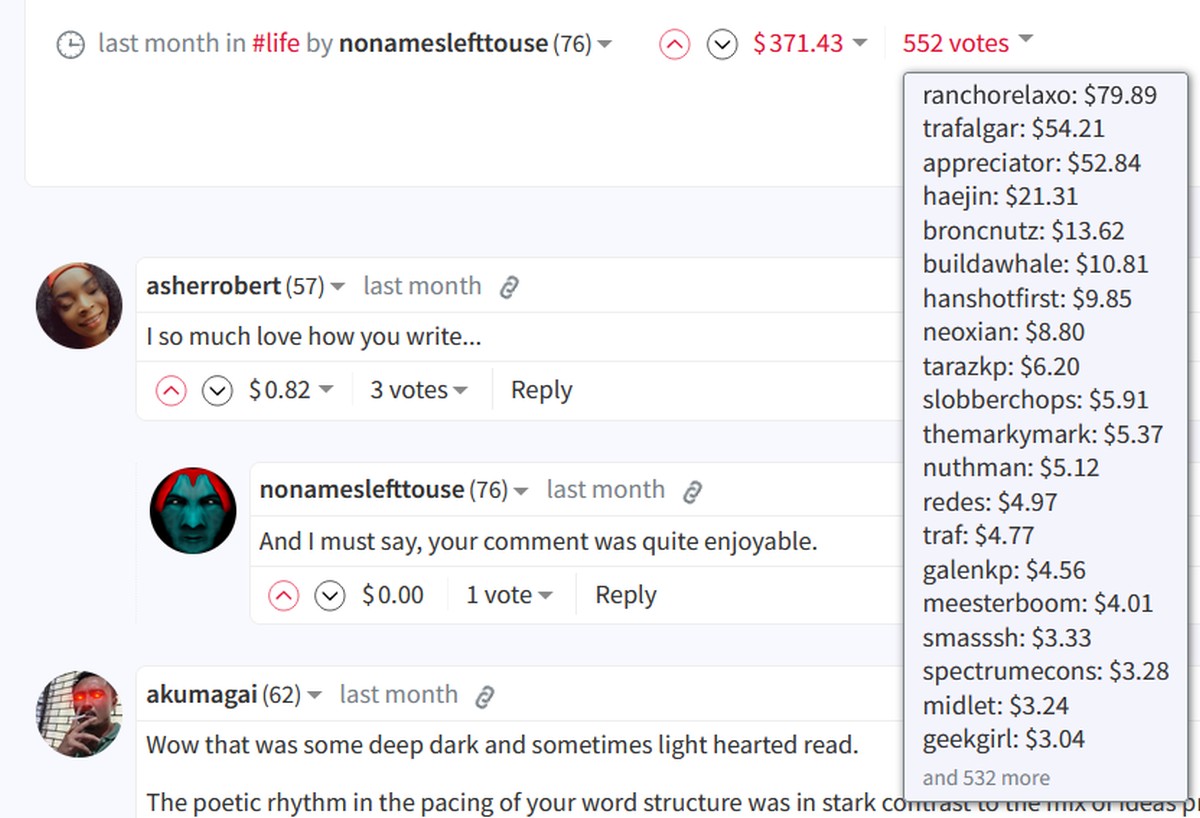 You didn't mind cashing out thousands of hive months after you called the place satanic, kiss assing hypocrites seem to be favored at blurt.

What's wrong with that? isn't that what Blurt was designed for? to be able to self-vote or get voted on without any mechanism to have those rewards removed? go make his rewards go bye bye if you have problems with him cashing out.

Now who was the hypocrite again?

I can't take you seriously while that powering down of yours is still active. What?

You think I give a shit about $27 you haven't really been paying attention.

You folks are hopeless. And you're a Blurt witness as well. You're Blurt stakeholders. All your attacks stem from Blurt's displeasure with Hive (well documented).

A lot of folks on Blurt are trying to distance themselves from the mess they're creating. Just thought you should know. They'll use you guys, then hang you out to dry and pin everything on you when it comes time to deal with what you're doing to me. Seems an entire blockchain social community known as Blurt is cyberbullying now and directing much of it towards me. I can provide evidence as well but you folks do a fine enough job of doing that yourselves.

Anyone can click the link you provided and see there's nothing satanic about that post or anything I do anywhere in life. If you actually took the time to decipher the code, you'd see why accusing me of that would be so insulting; but you're not able to connect the dots, even when it's highlighted in red. You don't even know where to look, or how to see. I could even explain it in one letter and all that would do is confuse you.

You guys just don't get it.

Anyone of sound mind can see how ludicrous your behavior is. And how disconnected it is from reality.

And it's probably worth mentioning that was, in a way, a very humorous, but mostly a feebleminded attempt at discrediting me. It's laughable, but not in way that makes you guys look good.

Every day, I wake up, and check to see how I'm being harassed. Every post of WTP's includes links, in Blurt's name, that lead to your despicable behavior and disturbing treatment towards me. You think you're taking on a massive social blockchain by harassing me. You act like I have some big crew to back me up; but the reality is I'm just a writer and artist from Canada and I have to deal with this bullying and harassment every single day, alone. But I do have a lot of help and support.

Quick question, what is more disturbing your cartoon face or your real face? lol

I agree with the assessment of social decline.

On the Blurt front, I'm indifferent. I don't think most Hivers experience any problems. Thus, there's no motive to change blockchains.

In my unsolicited opinion, if you want to report alternative news, you kind of have to take the lumps. Controversy is surprisingly controversial. If it's important to you, then you'll end up like that gangstalker guy who spams everybody with his mind control posts. He doesn't care that he's downvoted to oblivion. He's on a quest. It's more important to him to expose the truth than it is to earn Hive coins.

Similarly, if you want to "expose the truth", the rewards shouldn't matter.

Other than that, I enjoy your other posts about your travels and investments.

I already made out like a bandit here unloading 21,000 hive with an average price of about two dollars, bought at 10 cents.

If you respect my opinions and financial advice, trust me. Buy low sell high. Blurt is two cents. For it to go up 10x is a piece of cake. For hive to go up 10x....well, I ll just say good luck with that. There is your reason to move to blurt if you can t find any other.

Thank you for the compliments, but frankly Im not impressed with those who watch the abuse, corruption, and downright satanic crap all over this platform ...and to say, well they didnt attack me and you look the other way. If that is your level of morality, here is a tip, make sure to keep quiet, keep your head down, stay a-political, and look the other way, or you will be next. And "most" not getting downvoted is really not a good track record. Here...I ll give you your first so you know how it feels. Lol

Not my first downvote. I've had a couple of random ones with no explanation. At least with yours, I know why.

I understand the potential for 10X. I hadn't considered that. Still, I'd just quietly move over. Why would it matter to me what other people do? I guess that's what puzzles me. Why make a stink about it? All you're doing is giving them opportunity and motive to downvote.

Nomad Capitalist always says the same thing, "go where you're treated best". No mention of scorching the earth behind you.

It can't be that 10X is contingent on recruiting more people to move over. You'd need the whales to move to be able to significantly pump the price of Blurt. Financially, I see what you're doing. The way you're doing it is odd. The censorship, to me, is a separate issue. But, at the same time it's a non-issue given that you've decided to leave anyway.

Best of luck. I hope it works out for you.