Hatching Chicks with a Broody Hen

alexanderfarm (59)in #homesteading • 2 months ago

Broody hens are crazy. They hold their poop FOREVER, starve themselves, pluck all the feathers out of their chests and WILL NOT MOVE. Even when there's a line up of chickens screaming at her to quit hogging the best nesting box. Even when I fight her everyday for my breakfast. She WILL NOT MOVE.

We weren't planning on raising chicks this year, but, Mother Nature always wins. So here's how we did it.

One night after we got the kids to bed, Jon and I went outside after dark. We snuck into the coop. Chicken's can't see well in the dark but they still knew something was up. Everyone started bok bok BAGOCKing. The drake duck (his name is Tripp), was hissing. We were whispering to each other like we were parents after bedtime or something.

We snatched that broody chicken up out of her box and moved her to our other shed. 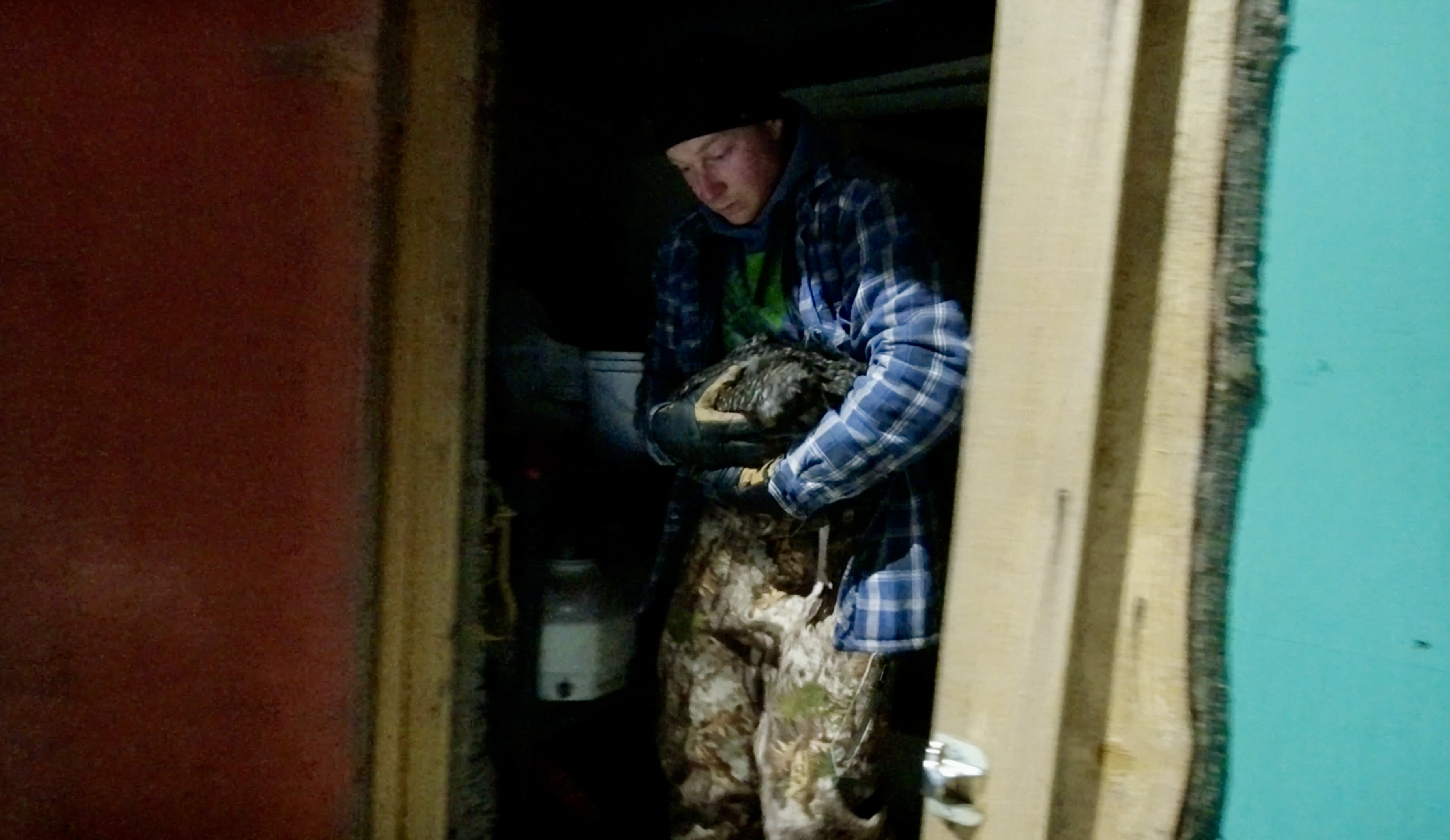 We already have a little brooding pen set up in there from the chicks we raised last spring.

(this picture is from last year's spring chicks) We used a milk crate with some straw in it for a nest, then decided to risk it and put the eggs under her right away. Some people will use fake eggs like rocks or golf balls for the first night just to make sure they are going to stay sitting. We should have done that.

After we put her in the box we gave her a few minutes to settle, and then checked on her again. She was walking around in the dark. So Jon put her back in the box. We also noticed a powerful smell of poo.

The next morning we found her sitting beside the milk crate nest. We also saw that she took her big ole broody poop right on top of the eggs. I guess it was a rough night. And we should have used some golf balls. Jon set her back on the nest. Later in the day she was still sitting there, so we switched the eggs out for some fresh clean ones. 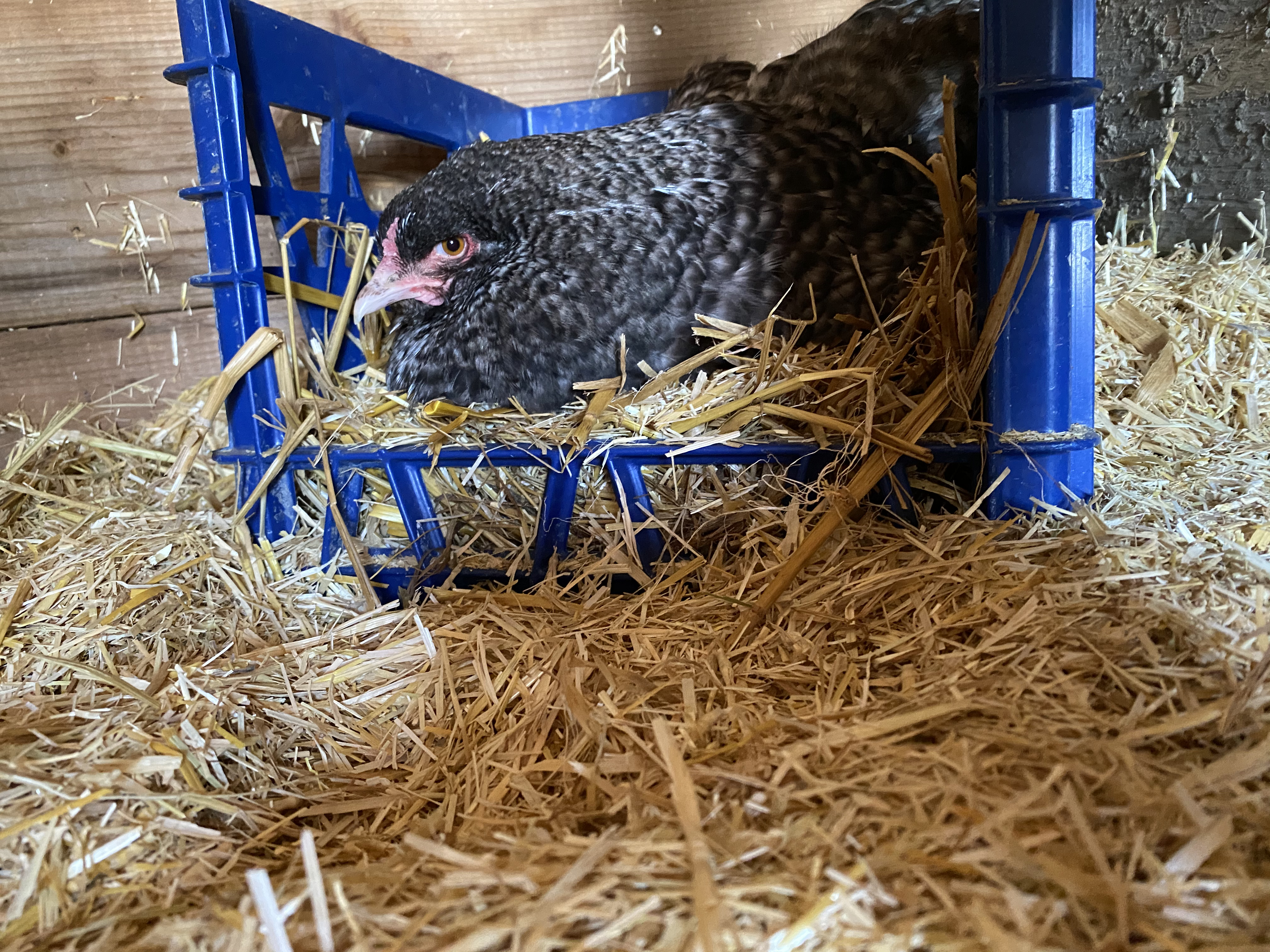 I ended up putting fifteen eggs under her. According to my research - that's a lot. But I believed in her.

I should also mention that we put food and water in there, and had a heat lamp ready to go but not turned on yet.

I didn't see her leave the nest again until day 21, when the chicks hatched. There was evidence that she occassionally left the nest, but every time I saw her, she was sitting perfectly still, all fluffed up. It's like she was in a coma.

A few days in, she kicked an egg out of the nest. I cracked it open and it was just a gross looking egg. Probably not fertilized. So that left us with 14 eggs under her for the remaining time.

(this is what is looks like when you get kicked out of the nest...) 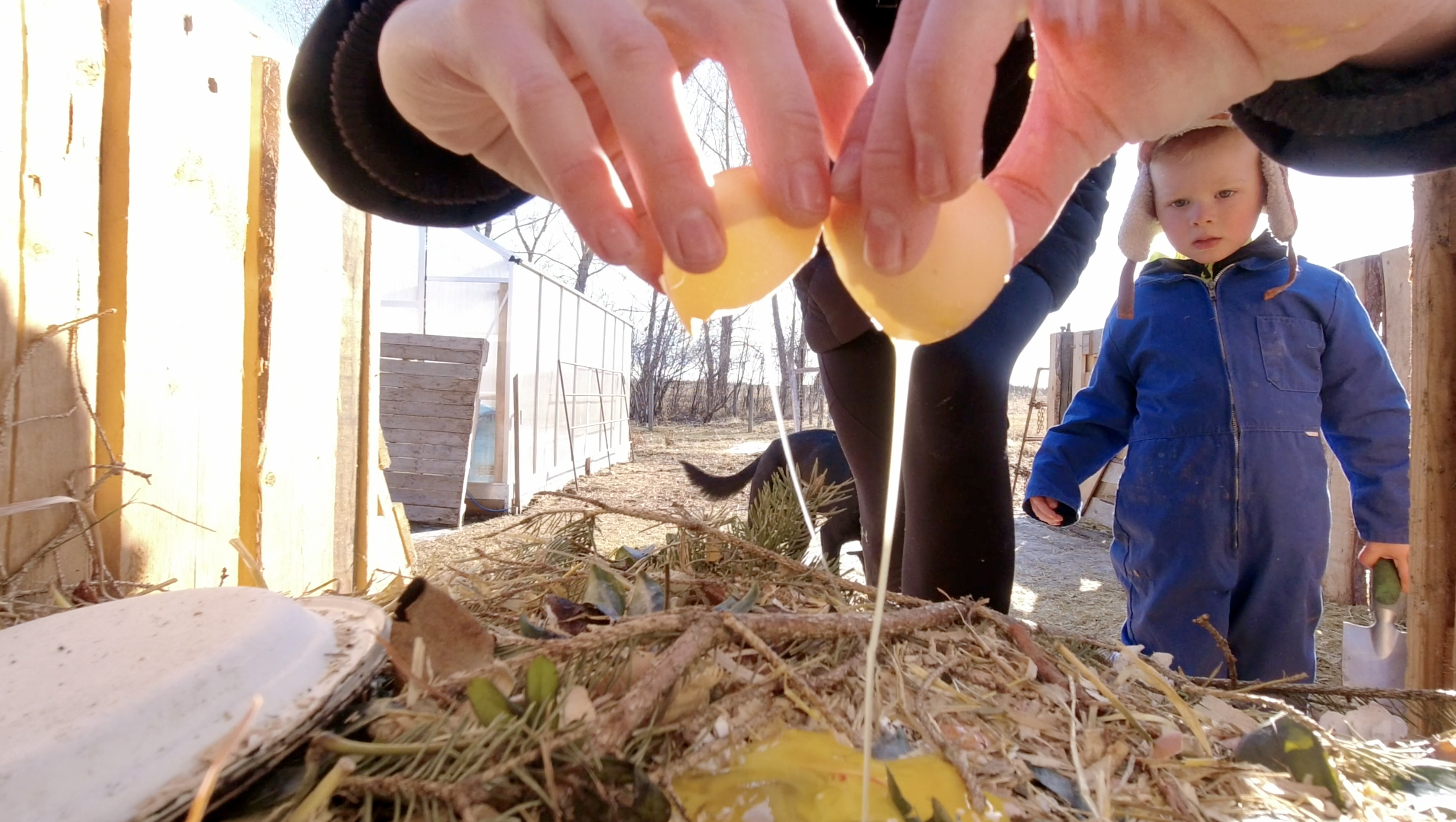 Many people will candle their eggs on day 10, and take out anything that isn't developing. We decided not to disturb her.

About halfway through, I started to feel bad for her. She had hardly eaten or drank anything. So, I made her an electrolyte drink, and put out some ground beef, cucumber and banana for a treat. She ate the beef up first, and then the bananas, and cucumber seeds. 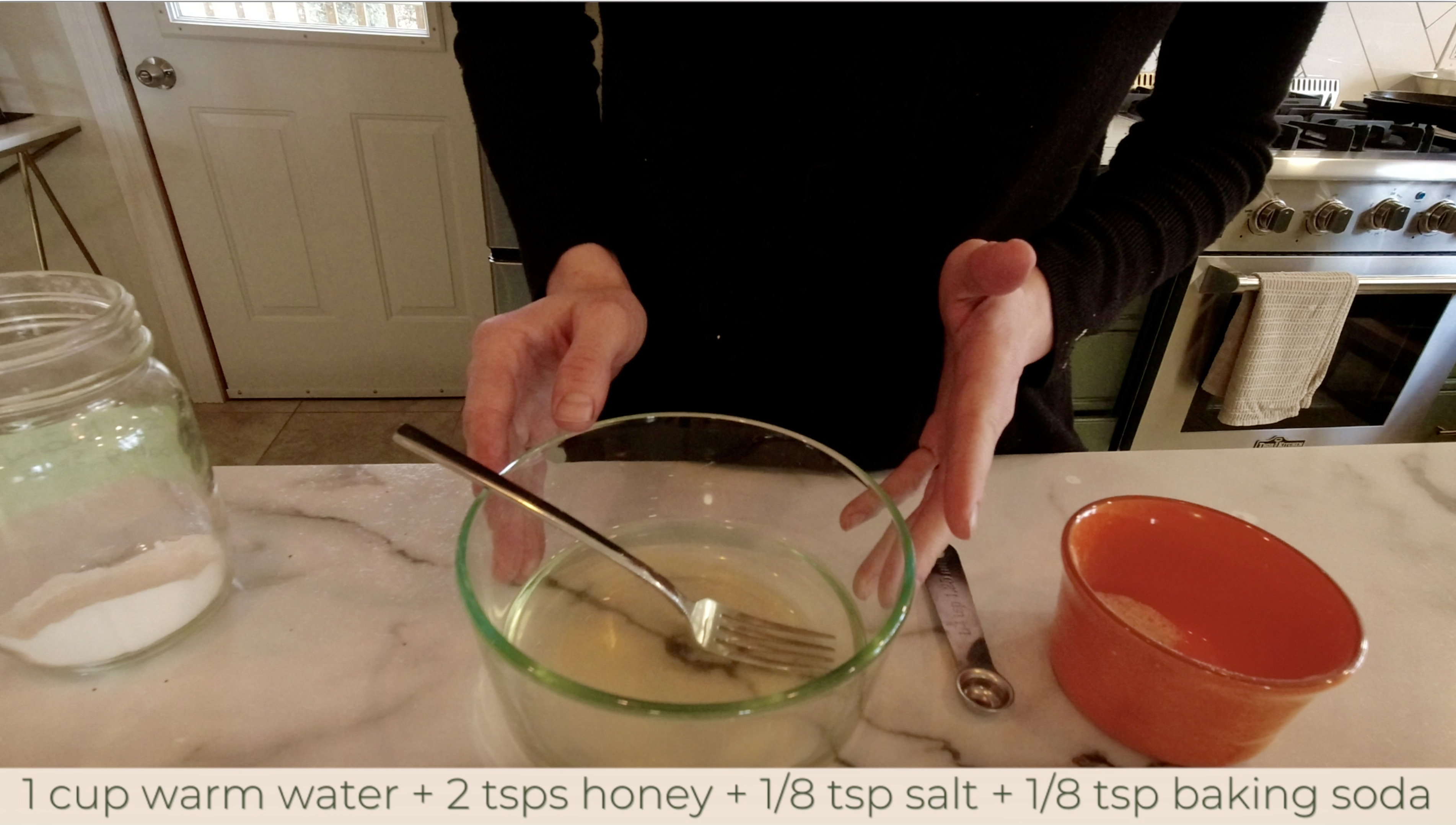 On the morning of day 21, I heard those sweet chirping sounds. I set up my camera and let it roll for the next two days. We were able to see her come to life. She woke from her coma and became a busy mother hen. We could see her reaching under to rearrange shells and scratch. And then, we started to see tiny little fluffy chicks emerge. In the end, she hatched eleven chicks! We cracked open the other three eggs and saw that they weren't developed at all. So they probably weren't fertilized. 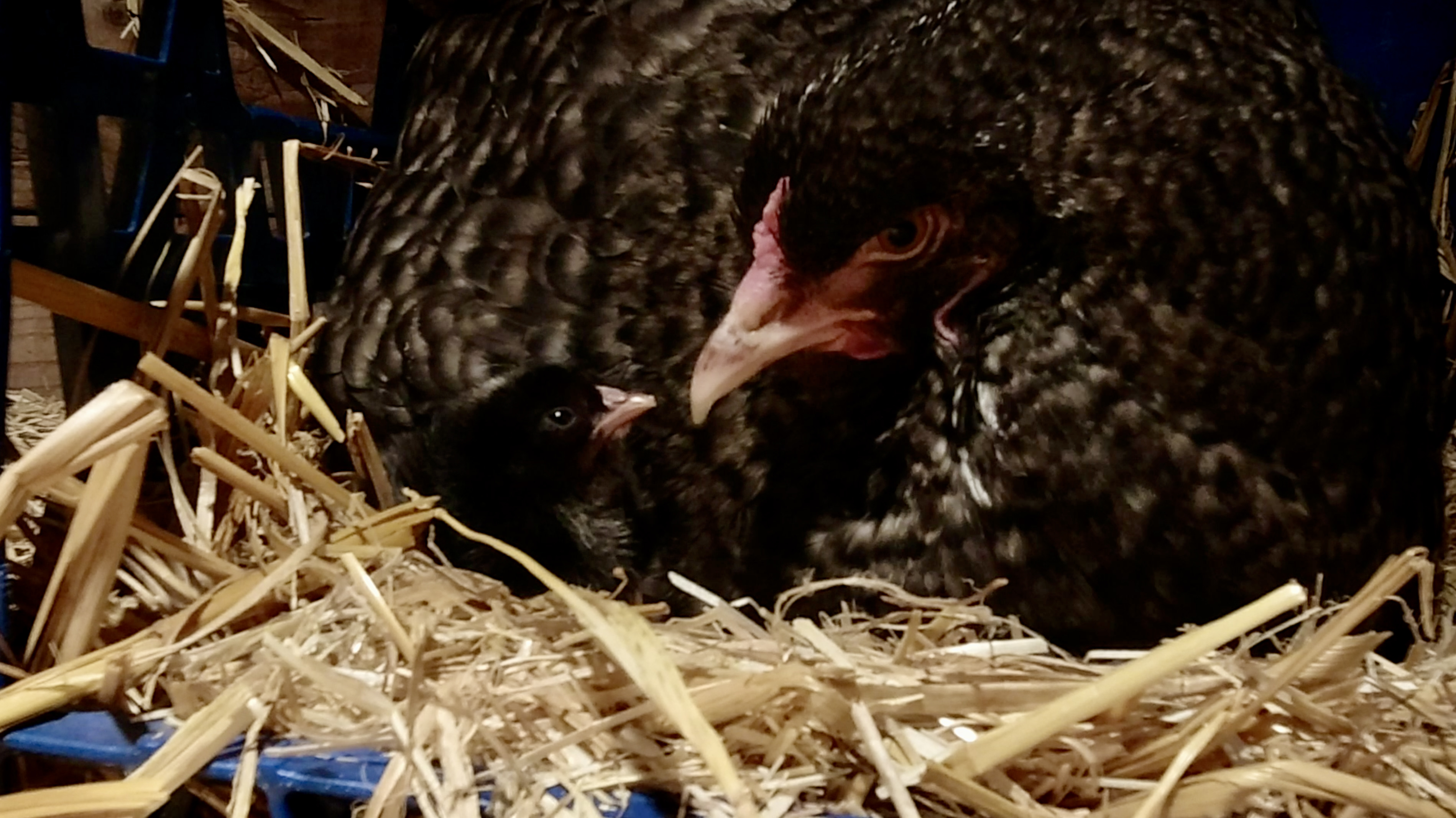 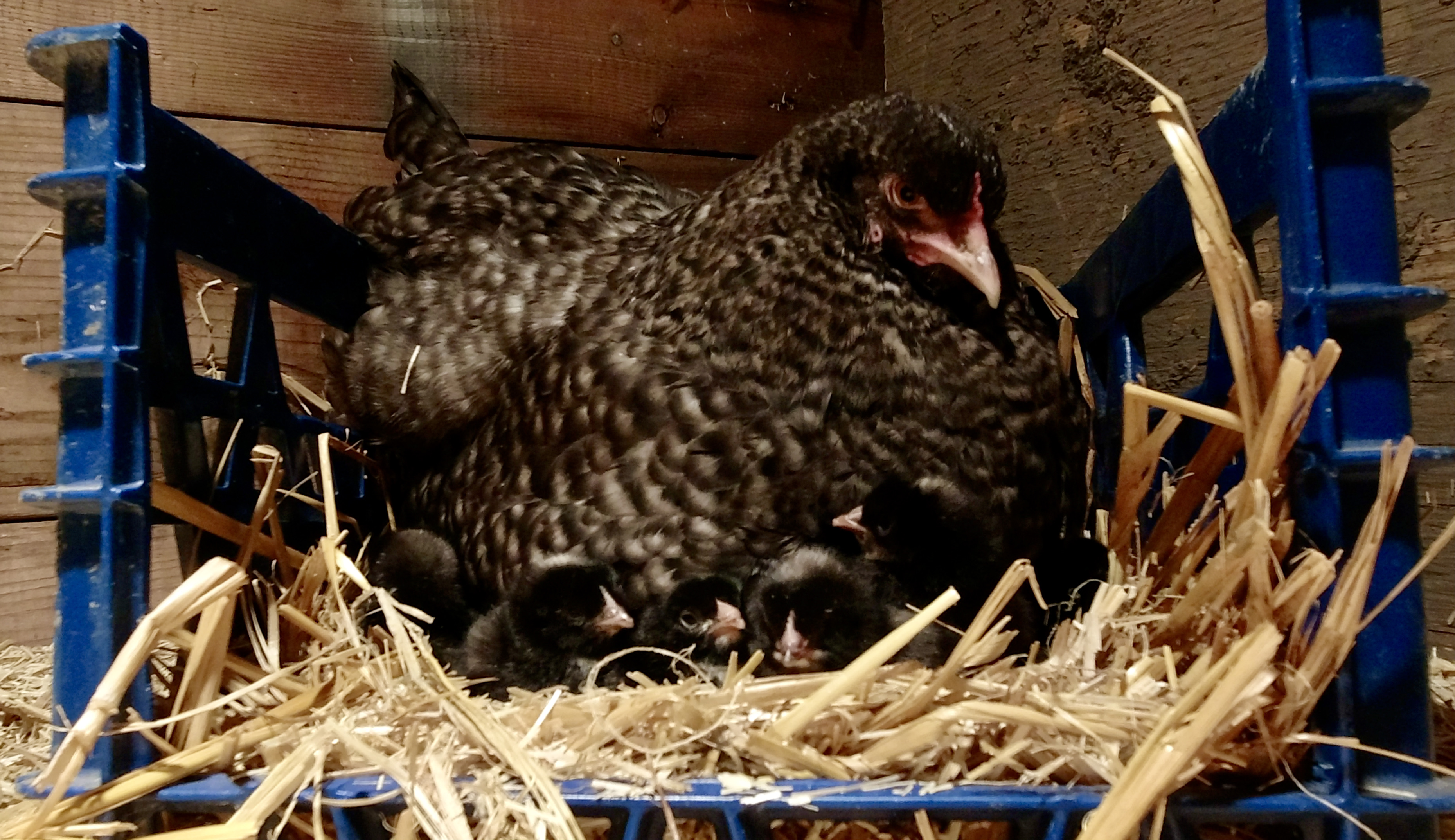 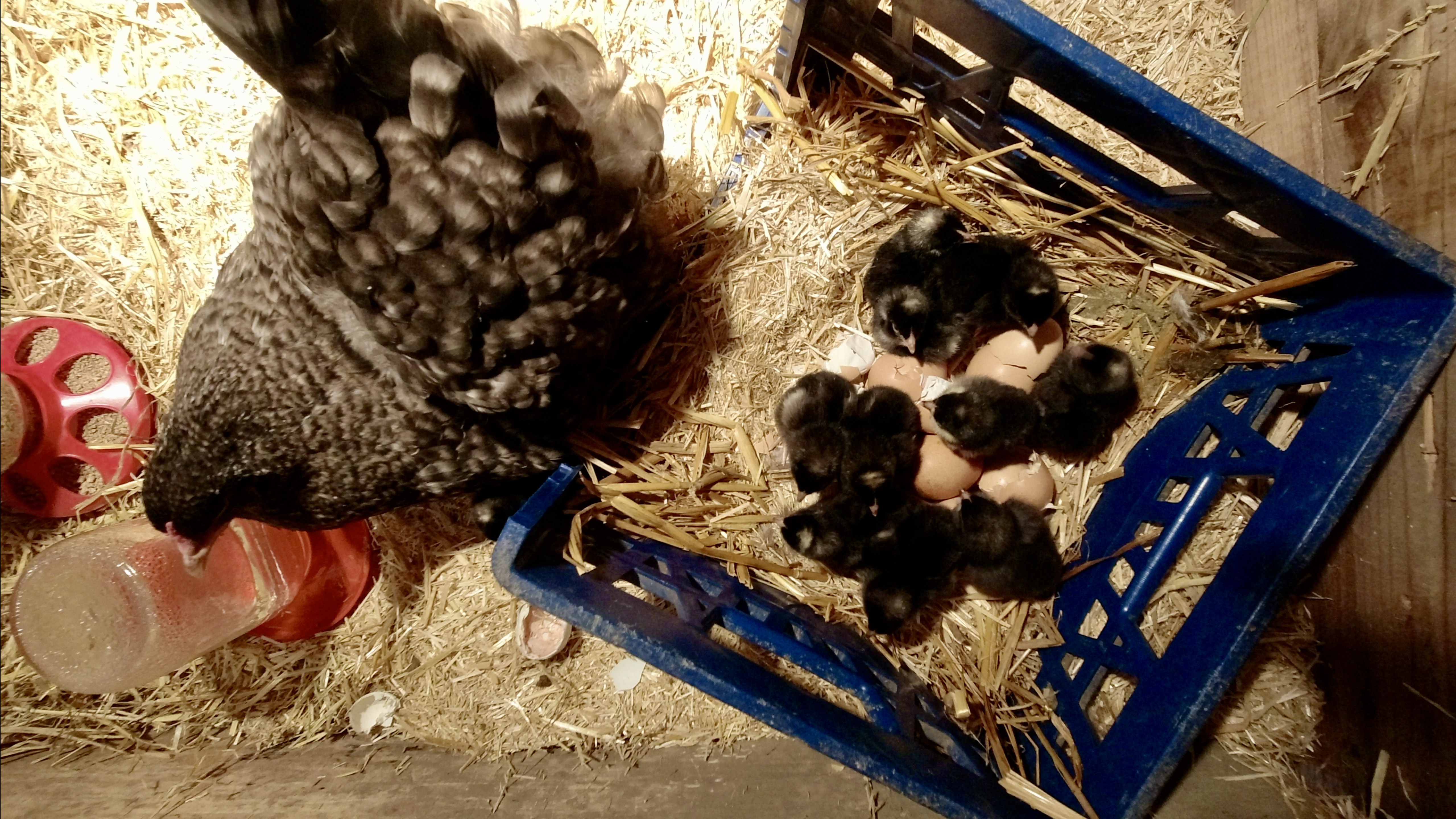 This experience was really cool. It was amazing to see the hen totally consumed by her natural instincts. She's still taking great care of her chicks. They love to jump on her back and get a ride, and play with their siblings.

Broody hens seem to be contagious, so we should be expecting more chicks from another hen on April 26th.

We've raised "day old" chicks that we purchased, and we've also hatched them at home in a DIY incubator. But hatching chicks with a broody hen is definitely the best experience.

This is the first chick we hatched in our homemade incubator last spring. Now she is the mother hen of eleven little chicks. 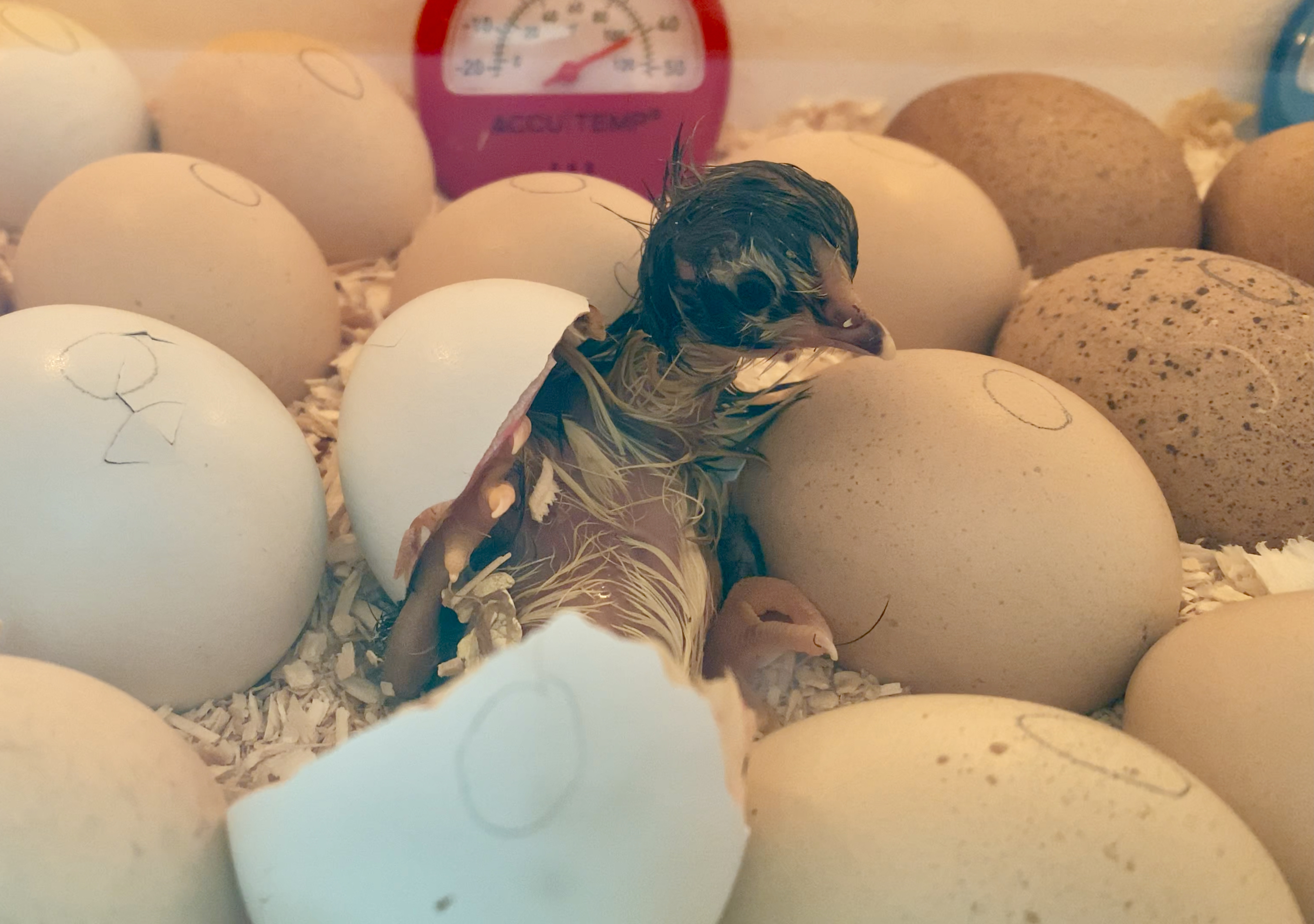 Here's another video of just the cute baby chicks and their momma. Your cats and kids will love it!

Have you raised chicks before? Did you use a broody hen, incubator, or purchase them? What are some of your best mother hen, or baby chick moments?

Congratulations @alexanderfarm! You have completed the following achievement on the Hive blockchain and have been rewarded with new badge(s) :

Love your enclosure for chicks. It's very similar, just smaller, to ours. We've raised up to 95 chicks at a time each year, but not this year. We always got the day olds as close to May 1 as we could. One day I wanted to set up to do a broody hen, but the first obstacle was being allowed a rooster....

Oh that’s interesting that you’re not allowed to get a rooster. Is that a city policy?

95 chicks is a lot! We’ll probably be raising larger batches in the future too. Maybe this spring!

No it was the policy of my late husband. He could not STAND crowing!

I’m so sorry for your loss. Roosters are so loud. I don’t blame him for not allowing it! I’ve gotten used to it now. It sounds like a farm.

Thank you very much, very good info, and the video is really well edited, well done!

Another great post! Loved to read this. I shared it with my twin sister, who lives nearby ( here in Portugal ) and is a home schooler and homesteader herself -with chickens and sheep, although the latter are merely replacement lawnmowers for now :<)

Haha! Thank you for reading and sharing my post with your sister! I’m glad you liked it!

How gorgeous. There's something so sweet about a mother hen and her chicks. Unfortunately, hen raised ones rarely like us, so I tend to incubate more.

I just left the following message with canadianrenegade, because they probably missed the growth of the communities while they were away. I'll paste it here for you too.

There's a lot happening to form a support network with the communities at the moment. I didn't realise you hadn't posted this in one, but the Natural Medicine community is a good place for it. Unfortunately, most of the homesteading communities haven't really taken off, but NM is really active and I do the Lotus Garden homesteading newsletter for the community.

Using the communities can help us to bring more rewards your way, but don't feel obliged if it's not your thing.

I actually haven't seen any homesteading communities here on hive, at least not yet. Whenever I write a garden related post, I use "homesteading" as one of my tags, but that tag doesn't seem to be very well followed.

I think jacobpeacock started a homesteading community, but it didn't really take off. Possibly because natural medicine was already so well established with a reasonably big vote.

I only really go through the homesteading and gardening tags once a week when I do the Lotus Garden. I wish I had more time to frequent it more often.

Thank you for this advice! I posted my new article to the NM community :)

Ah yes, broody hens! 😀
Back in the 1980s and 90s when I was homesteading in the country, we raised chickens every year. We mostly bought day old chicks and raised them. It was my experience that most of the popular commercial type breeds of chicken just don't get broody for long enough to hatch the eggs. Our best success was with Buff Orpington hens. We got chicks from a couple of those hens. Strangely enough, we also had a bronze turkey hen hatch several chicken eggs along with s few turkey eggs. That was an interesting experience.

It sounds like you have a couple of good egg setters there.

Awesome! Thank you so much!