wallstreetbets: REVENGE of the Retail Investor against Wall Street Titans - A revolution has begun

libertyacademy (65)in #leofinance • 2 months ago (edited)

wallstreetbets: REVENGE of the Retail Investor against Wall Street Titans - A revolution has begun

In case you haven't noticed, revolution has begun!

And this revolution has the potential to shoot cryptos into the stratosphere. (more on this later)

We all know that the markets have been almost entirely rigged for a few decades, if not longer, now and recent events have propelled this thievery to new heights and right out in the open by very corrupt Wall Street Banksters and Hedge Funds in much the same fashion as Democrats have openly and blatantly rigged and stole the Election for their puppet Biden and how Big Tech have colluded together to monopolistically bully anyone (such as Parler) who don't toe the party line.

Unless you've been living under a rock, the events of this past week have been eye-opening to say the least.

In an oversimplified nutshell, a small army of Redditors on wallstreetbets got together to defy corrupt Wall Street snakes and decided to promote a company - Gamestop (that has been heavily shorted by hedge funds for a very long time) - and encouraging its followers to buy the stock in order to punish and shake out the Wall Street players out of their shorts which caused a tremendous short squeeze. The stock skyrocketed upwards from a measly $20 to a mind-blowing $350: 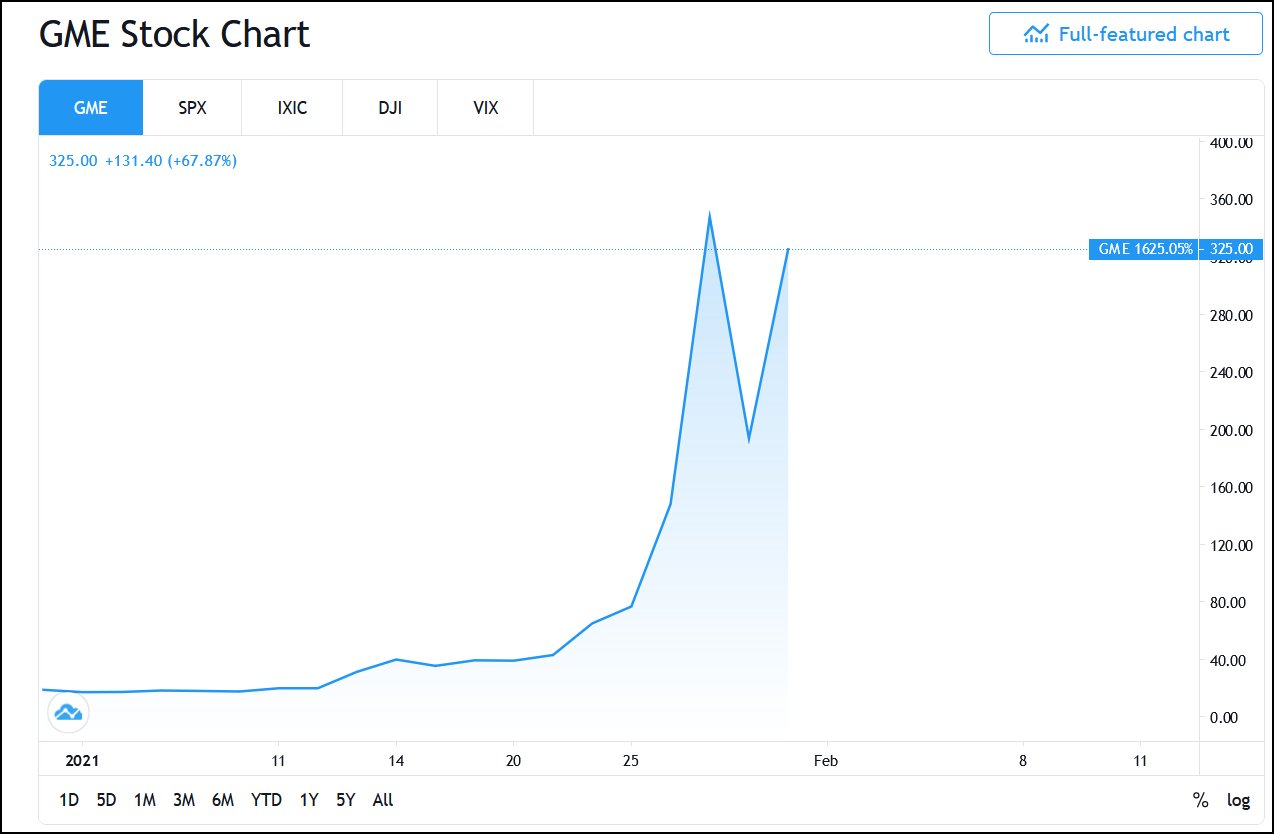 This caused some Hedge Funds who had shorted the stock to lose billions of dollars, having to be bailed out by their big brothers (e.g., Citadel)

If you want better descriptions and analyses of this event, I strongly recommend the following videos from crypto experts Ivan on Tech and Sheldon Evans. I am posting their relevant vids on the matter hereunder:

Watch from 02:21 to 08:20. He provides a very simple explanation of 'short-selling' and the recent events with regards to Gamestop. And also shows why there is a strong need for decentralization of markets.

Watch the entire video. Ivan provides very good insight about how Robinhood is shafting its own clients in order to bend themselves to Wall Street hedge funds and giants.

Robinhood in the cross-fire, Stealing from the Poor, Giving to the Rich

Of course Ivan mentioned how Robinhood - a very popular stock brokerage firm with zero trading fees that serves retail investors, mostly millenials - has breached its duty and has actually even prevented its users from buying the stock. Incredible.

A few related headlines about this pure madness: 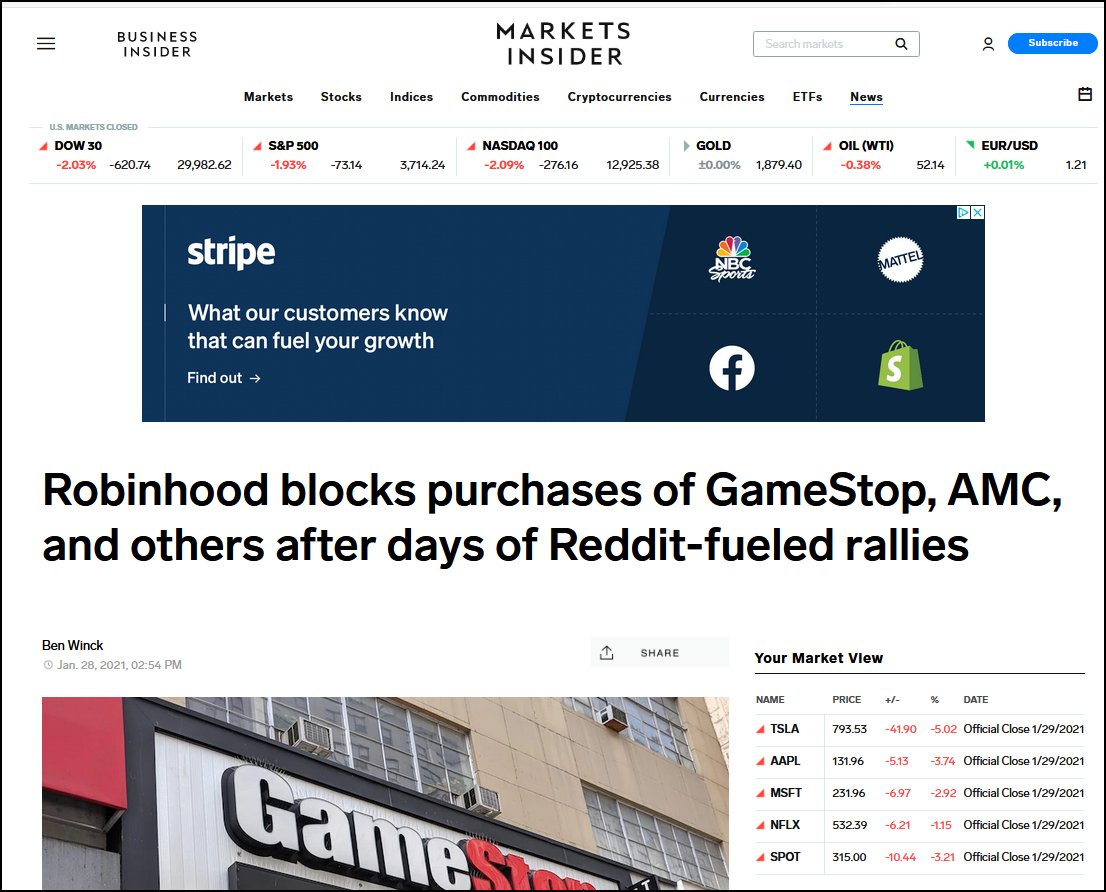 Business Insider - Robinhood blocks purchases of GameStop, AMC, and others after days of Reddit-fueled rallies, Jan. 28, 2021 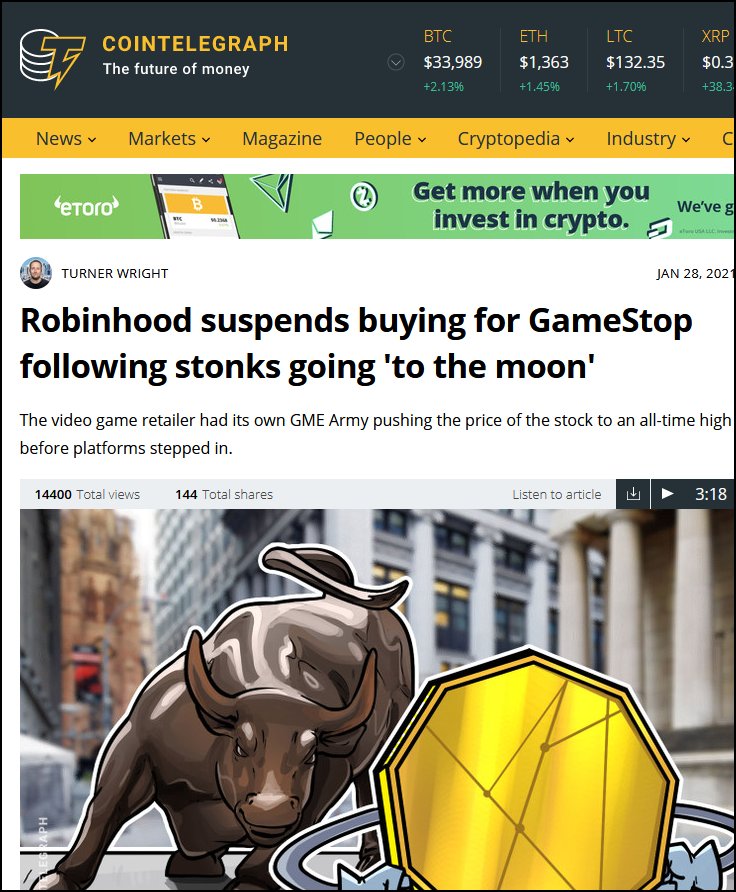 The Revolution has begun, Cryptos to the stratosphere

Oh, it will be televised and, more importantly, it will be on the [incorruptible and unerasable] blockchain where it cannot be memory-holed by the monopolistic and hubristic sycophants at Twitter, Facebook, Google, or the MSM.

As Ivan so astutely points out in his video decentralized exchanges (such as Uniswap) and Ethereum will be the future of finance, as their platforms are not subservient to any central entity, nor can they be corrupted in such manner. 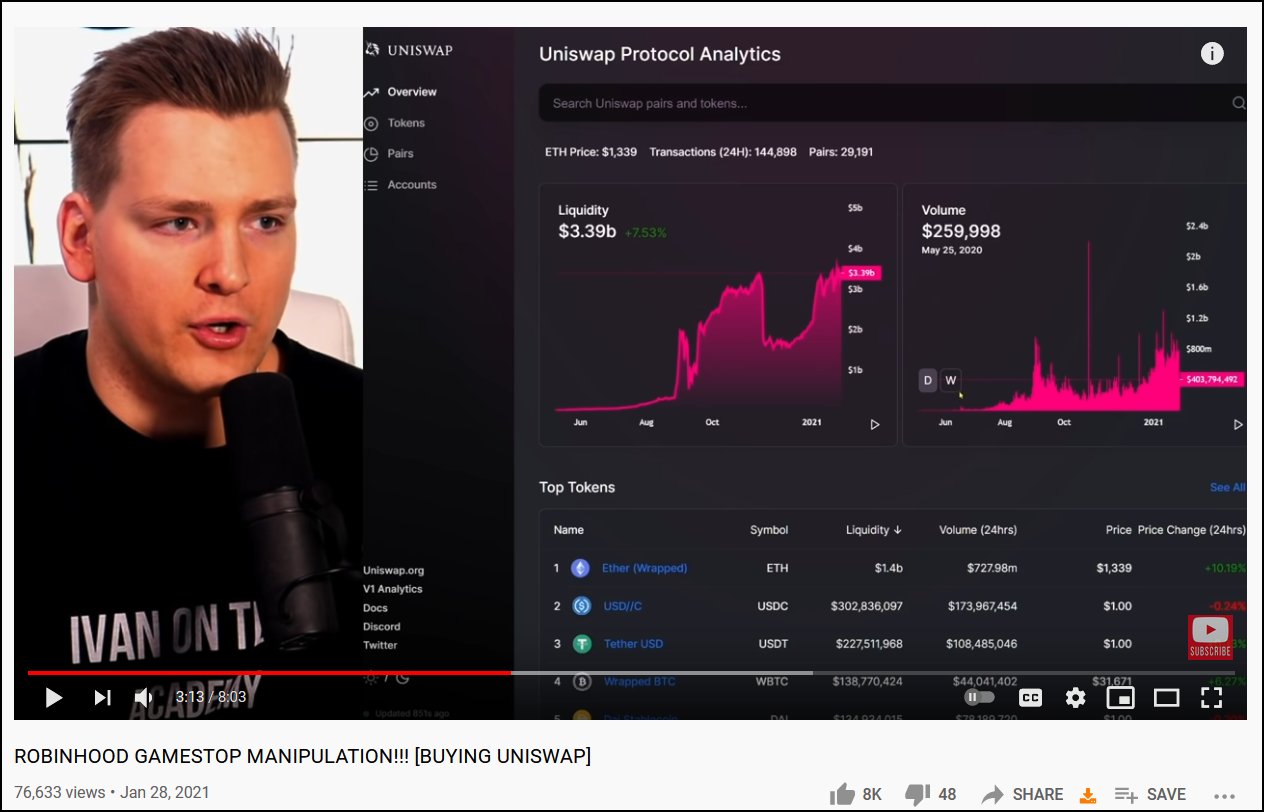 Since they are decentralized and blockchain-based, anyone can trade on them without fear of restrictions like is the case with Robinhood and other brokerages. This includes traditional brokerages not allowing Bitcoin or crypto-related ETFs to be traded in certain types of accounts (like retirement one) as is the case in Canada and elsewhere.

I've written about a subsector of the cryptosphere that has absolutely exploded in the Fall of 2020, namely DeFi, or Decentralized Finance and how the rules of finance are being rewritten and will be of a more transparent, ethical, and fair nature as opposed to the rigged game in traditional finance.

Central banks, retail banks, brokerages, insurance companies, you name it, will be challenged like never before, as the masses are absolutely fed up of their thievery and restrictions.

I think that after this debacle at Robinhood, these retail investors will indeed migrate towards honest and non-discriminatory platforms such as Uniswap, Ethereum, and many more.

All this has the potential to create an excessive amount of FOMO (Fear Of Missing Out) and will likely propel Bitcoin, Ethereum, and countless Altcoins to great heights in 2021 and beyond.

Get the popcorn ready.

We live in interesting times.

They are going to try to pump XRP tomorrow...
Big barrier though with the USA turning off XRP trades in the us on most exchanges. Uphold crashed yesterday for over an hour.....

Let's hope the rest of the world (you hear me Japan?) chimes in :) I hear Bitrue is decent.

Bitrue and Uphold and tons of other exchanges all 'crashed' at a couple minutes before the 8:30 pump.

The 'leofinance' tag would be a good one for this post...a suggestion :)

Yes, can you see this was my primary tag.

All this has the potential to create an excessive amount of FOMO (Fear Of Missing Out) and will likely propel Bitcoin, Ethereum, and countless Altcoins to great heights in 2021 and beyond.

How much do you reckon this FOMO will propel Hive, Leo and such?

Not sure about Leo and Hive. Hive could have boosted after the Parler affair but didn't. But you never know. As the masses are migrating off those centralized power centers to decentralized fair ones, including social media and video streaming.

Yeah! we never know. That's how life use to spice and sweeten things better to surprise us always off ward. :)

Their song We gotta take the power back is very fitting, even two decades later:

Yeah, the movement's in motion with mass militant poetry
Now check this out...uggh!
...The rage is relentless
We need a movement with a quickness
You are the witness of change
And to counteract
We gotta take the power back

Watch them actually shut down the New York Stock Exchange for an entire afternoon back in January 26 of 2000: 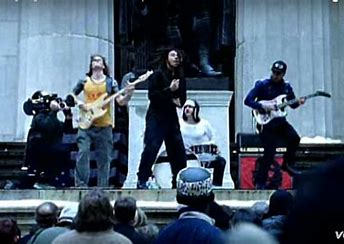 How can you not love these guys?

Congratulations @libertyacademy! You have completed the following achievement on the Hive blockchain and have been rewarded with new badge(s) :