The last will be the first. Story and illustration for the Art/music/writing contest, "Cyber Pirates versus Werewolf Ninjas" Dear friends, I leave to you the creation in process of a world that emerged from the proposal that @logiczombie made to the platform.
I have initiated it with this narrative fragment and this illustration fragment. I am grateful for the imaginative possibilities of @logiczombie's proposal. It is a vast world to explore and I hope to be able to continue it soon.

I thank the Logiczombie Community for hosting my publication. 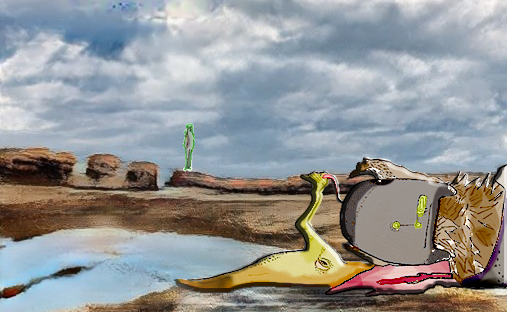 The last will be the first

Bordo had a very itchy neck. The ticks had been torturing him for days.In the soldiers' barracks it was impossible to keep him safe. Cursed the day he decided to enlist.
When the recruiting unit passed by his street, everything seemed very nice: You'll have an exciting future, they said. And off he went. Everything looked good the further away from his father he was. Since he arrived in Catamarca he had had to put up with a lot of shit. Ticks on his ass, and old technology. If the cyberpirates really decided to attack, they would fry their brains. Besides cutting off their balls, as they used to do in their physical attacks.
That morning his headset had almost died and he was fed up with the white noise. So Bordo was in the middle of the desert dust alone in his solitude, calculating the time of the relay because of the position of the sun, as he had lost his auxiliary field equipment in a dice game the night before.
Bordo, absorbed in the bites of the ticks on his ass, with his headset dead, and without a field assistant, never knew about the real attack of the ninja cyberpirates.
When the overload fried the interface circuits and the electromagnetic pulse set his neural broth to boil, Bordo barely knew about it. He withdrew the belfos and nothingness blessed him.

Mod was a small male pax. He had a limp and was far from the city. He had been retreating in a faint trail of white noise that no one was paying attention to. The herd was intoxicated by an enormous amount of electromagnetic garbage that was scattered from the communications center of the Catamarca detachment. You could smell it for miles, but Mod forced his hunger to ignore the thick trace of the trail and followed the thin thread that stretched on the horizon as a vague promise of satiety.
In the werewolf detachment, most of the young males sipped with their long forked trunks the radiation that escaped from the amalgam of burnt hooves and toasted bones. Beyond that, the elite would duel fiercely over the decoders and the occasional pax would lie with their guts exposed.
The fangs of werewolves, which previously frightened their species, were useless in the immobility of death, so that their brothers of the herd would crawl unpunished among the corpses, sliding over puddles of the encephalic broth, while young females were crowded in a corner, appetizing, offering their apices ready to sip the radiation from hormonal sacs of young males, swollen to no more power at the feast.
Mod did not come close, despite his hunger, despite the fact that his trunk was drooling and that the sight of the glossy females made his hormone-filled sac hurt. His instinct of containment had made him prevail. All his brothers, all the sons of Rul's defective litter had perished. Some of them starved, others were crushed like cockroaches by the healthy males, or torn up in fights of heat. Mod had been smart. He led a starving life, yes, but he was alive and would one day see his brothers humiliated.
One day, all would go before Rul and call him Great Mother, and he, the little Mod, would be feared.
With these thoughts the pax fed his weakness, crawled meter by meter under dust and sand, hiding from the harsh sun, clinging to the fine trace of white noise, until finally he found his helmet.
It looked at its dead prey in detail. The wreckage was disgusting. The carcass reeked of ammonia stench and werewolf ass. A river of ticks left the dead body that seemed to smile (or grunt) in the sun, its lips contracted in an involuntary rictus. From the helmet it oozed encephalic juice and could see closely how the head of that being had liquefied.
He kept everything in his memory, carefully. He did not discard any of the precious information and kept it for later. That was his advantage. Young males would gorge themselves on magnetic leftovers and later would spread their genetic mark on appetizing females overflowing with fat. He would take from this unfortunate enemy his frugal food and survive another day.
Mod extended his flexible trunk and dug into the mass inside the hull. Relief at last. A chain of receptors continued to work, weak but continuously.
He closed his eyes and squeezed into the stinking corpse's jacket, sipping. In peace.

Still too far away for Mod to perceive it, a zombie Logic was walking, relentless as his hunger, attracted by a huge smelly stain of brain juice.

The fund was created with Nvidia. The main images were drawn by hand and the illustration was integrated and finished in PhotoShop. 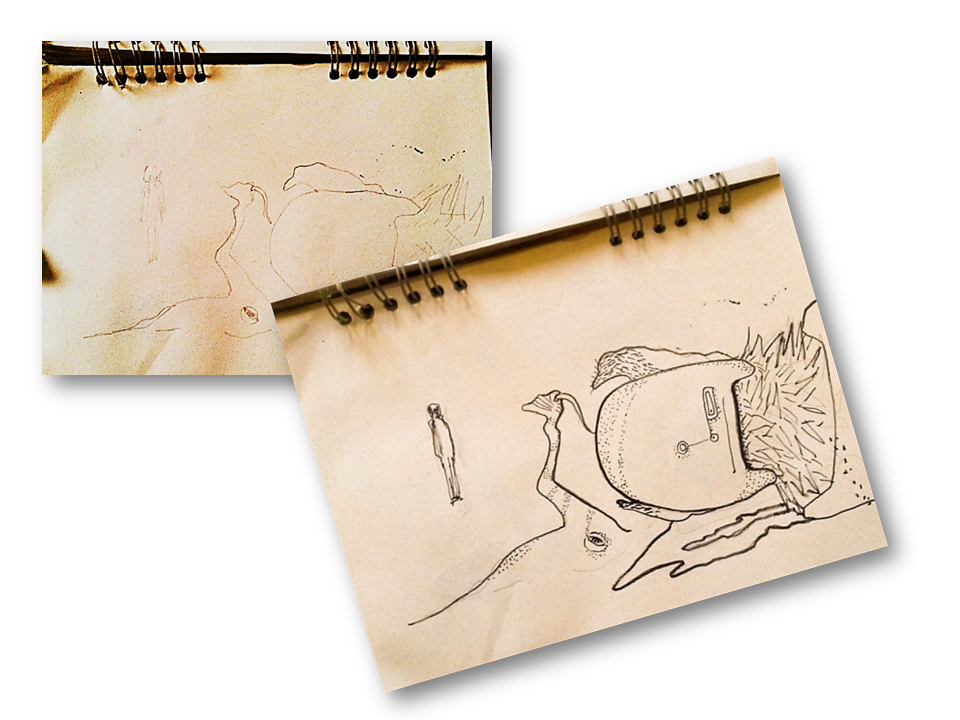 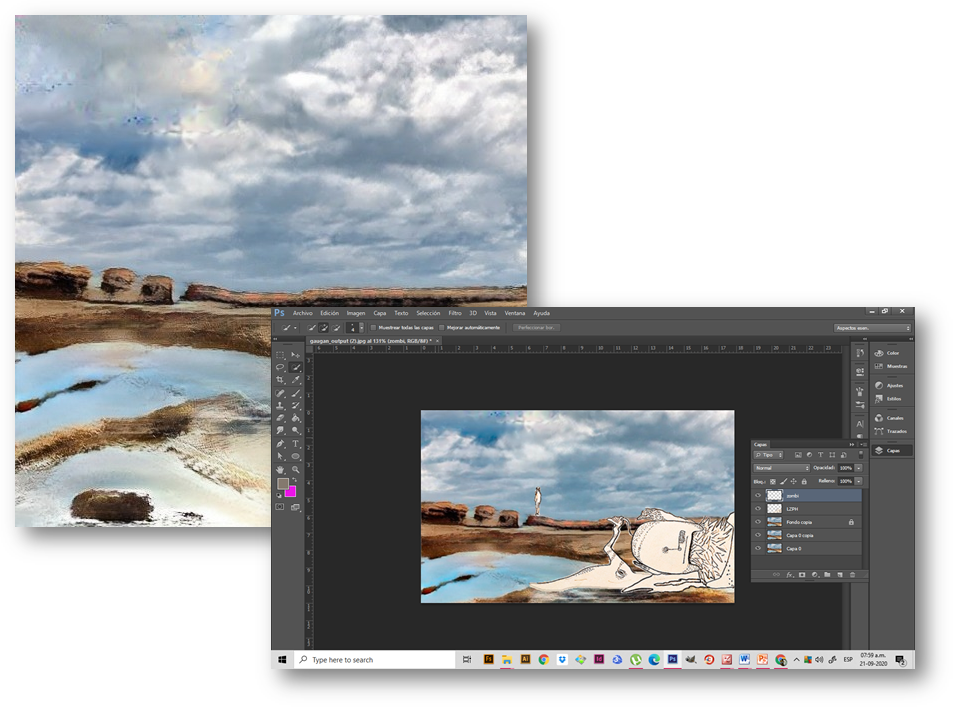 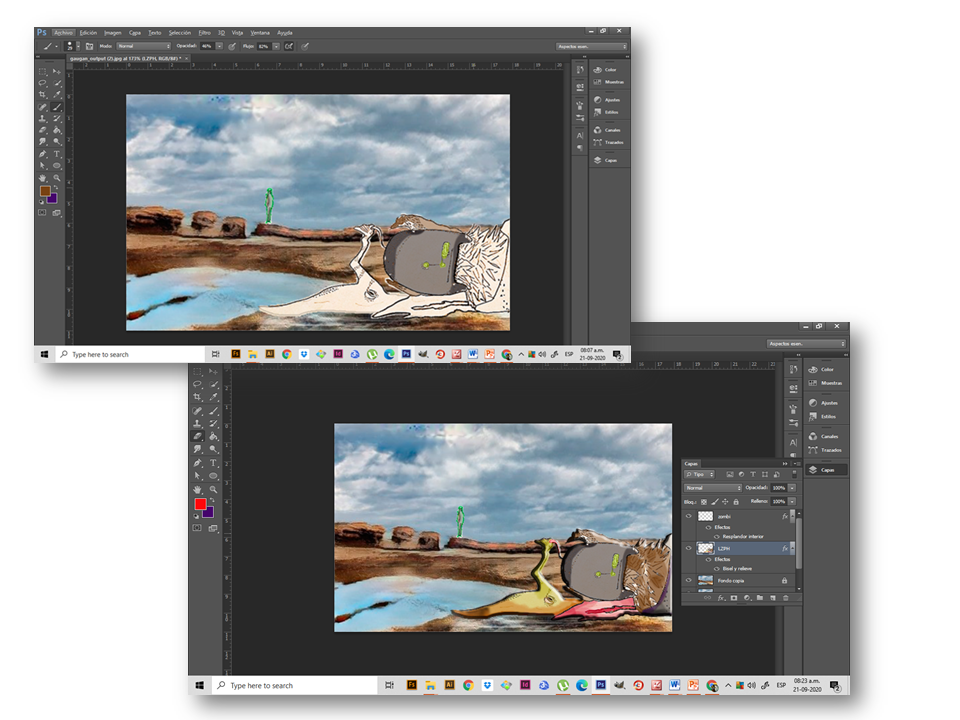 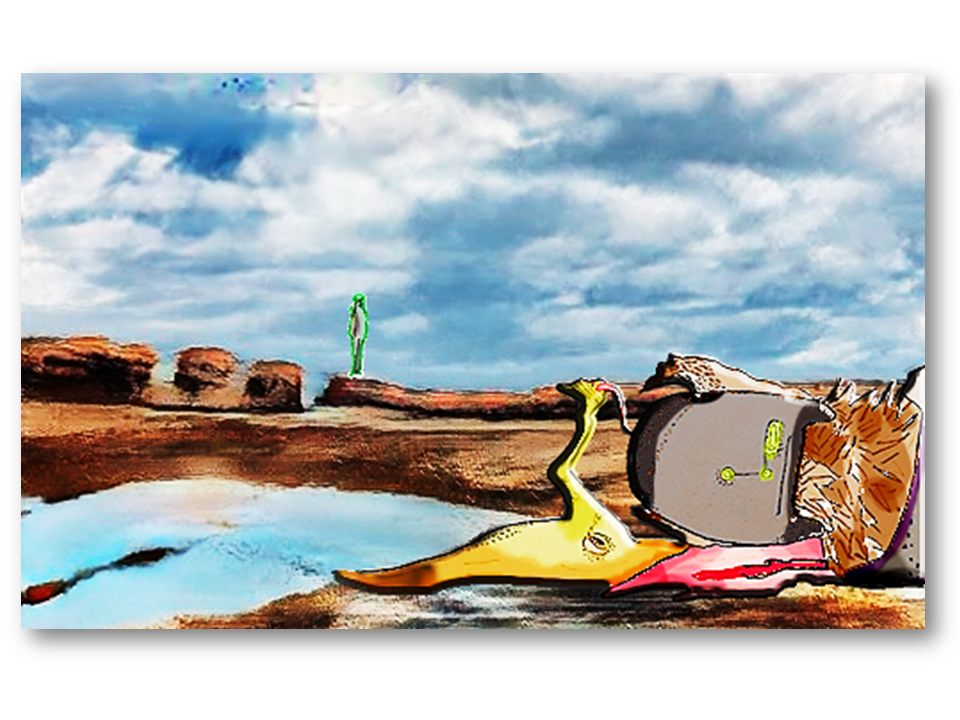 Bordo had a very itchy neck. The ticks had been torturing him for days.In the soldiers' barracks it was impossible to keep him safe. Cursed the day he decided to enlist. When the recruiting unit passed by his street, everything seemed very nice: You'll have an exciting future, they said. And off he went. Everything looked good the further away from his father he was.

Excellent character introduction. I like the mix of alien and familiar imagery (and smells). I like the personification of the pax. Extra points for the great artwork. I especially love that you included the sketches.

Thank you very much for your appreciation. I greatly appreciate the opportunity to write literature and draw. When I make illustrations, I always put in a summary of the process, as I am a self-taught novice and have learned almost everything by looking at the work of others.
Thank you for the contest. Thanks for the imagination.