Mank [2020], the chiaroscuro of a screenwriter. 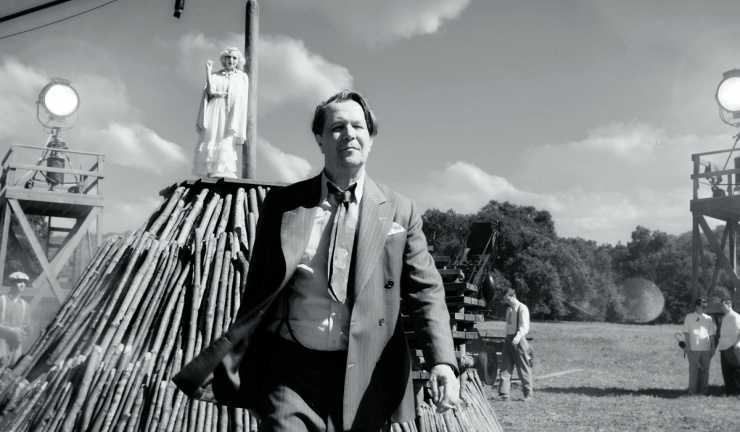 Once again Netflix at the forefront with a fulminant release. The latest installment of director David Fincher, after Gone Girl (2014) in the cinema and the successful Mindhunter series for the same platform, is now available. It is his most personal and intimate project, not only because Mank's script was written by his father, journalist Jack Fincher, who died in 2003, but also because in addition to that bond that shifts in the realm of affection, it refers to the world in which Fincher has performed so vigorously all his life and which he knows so well.

Mank talks about many things, but the core is the controversial story behind the screenplay of Citizen Kane, the film with which a young Orson Welles made his unforgettable debut in the cinema of the 40s, already converted into the "wonder boy" of American show business to the point that he managed to get the studios to offer him all the resources and creative freedom he wanted to finally put his talent at the service of cinema. They hit the nail on the head. Produced by RKO Pictures, Citizen Kane is to this day one of the greatest films of all time, if not the greatest, a legacy that eighty years ago anticipated the Oscar race by nominating it in nine of the most important categories, including Best Picture and Best Director. And despite all that, it ended up winning only one award, but one that Wells himself would have wanted for himself without having to resign himself to sharing it with the renowned, but alcoholic and, at that point, almost decadent, Herman J. Mankiewicz. That only Oscar for Citizen Kane was for Best Screenplay.

The approach Fincher Sr. takes to this discussion is precisely the point of view of the screenwriter who, like him, was also a journalist. Strictly speaking, Mank is not so much the biography of Mankiewicz as the autopsy of a creative process that would not have ended with the rightful recognition. It is, in my opinion, a film endowed with multiple successes, it reflects on the film industry, the power of the media, the incestuous love affair between politics and entertainment, but most particularly it is also a master class in cinema.

Fincher's filmmaking up to this point has been characterized by proportionate doses of plot and plot device, with characters who are either in abnormal or twisted situations or who are themselves misfits, outcasts or surprisingly sophisticated psychopaths. The character of Herman J. Mankiewicz, played brilliantly by Gary Oldman, is also something of an outsider. Up until the year when, according to the film, Orson Welles commissions him to write a screenplay, Herman had achieved some fame as a screenwriter and was known in his milieu for his acidic writing. By this time, although he was keeping his head above water despite his alcoholism, he was already in decline. This opportunity, which is presented as a rescue, will allow Mankiewicz to write his most legendary work and for which he would go down in history, even if overshadowed by Welles.

In this way, the film is presented as the path that led Mankiewicz to write about one of the outstanding characters of his time, the journalism magnate William Randolph Hearst, making a stark portrait of the personal, historical and social context that powerfully affects all the contours of this narrative. In this way, the figure of Orson Welles is in the background, there are almost no direct and face-to-face dialogues between the two until the end. Orson Welles is the patron who has commissioned a service, pays for it and manages everything the screenwriter would require to work, assigning him a secluded place to facilitate his creativity and concentration, a therapist to recover from a recent accident, a secretary and the absolute prohibition of alcohol, which by the way Herman manages to circumvent.
.

Notwithstanding the not very positive opinion of Orson Welles in this film, it is doubtful that David Fincher does not reserve some form of tribute to the young director throughout the film. Undoubtedly, the film recreates in a very effective way the aesthetics of classic Hollywood cinema, from the credits, through the sound, the visuals, the way the characters express themselves, a certain way of speaking, the music, the rhythm. But we also notice the application or incorporation of more than one of those innovations in cinematographic language for which Citizen Kane is so well known. Of course, the lighting is not only black and white, there is a predilection for hard, angular chiaroscuro contours in the manner of the German expressionism that Welles already knew; likewise there is a recurring use of the characteristic depth of field that opens up other spaces with backlit silhouettes, an example of which are the shots from the side of Herman's bed with the view, at his height, of the open door of the room pointing towards infinity from which intimidating figures emerge.

But there is still one more revealing aspect. Herman has at his disposal all the material he requires for writing, starting with a Spiral notebook. This small artifact is highlighted in more than one prominent shot in a clear allusion to the narrative structure of Citizen Kane, as if somehow that word had worked in Herman's unconscious to define the solution he would adopt in recounting Hearst's life. And it's not so unconscious. Through Herman Fincher he explains the challenge of time in film when confronted with biographical accounts: "You can't capture a man's life in two hours, you can only do a summary" Herman tells editor Josh Houseman, turned Welles foreman. Indeed, that's not possible, at least not without resorting to the gimmick of good editing. Houseman, on a first reading of his sketch, criticizes Herman that the audience "will need a map to understand" the film, that the film is "just a bunch of fragments that hop around in time like jumping beans," and that on balance, though his writing is of a high standard, the writer "asks too much of the audience," ending with, "He writes a lot, aims low." Just so. But Citizen Kane passed all the tests, and though seen today - with audiences more accustomed to temporal juggling in all kinds of films, there are few imaginable ways more efficient than the montage used by Welles to talk about the life of Charles Foster Kane, his character in that fiction. In the case of Mank, David Fincher also resorts to altering the chronological sequence of events, something that is not new to him, however, unlike Citizen Kane, Fincher does help the viewer by announcing that the next sequence will be a flashback, a leap into the past.

This being so, the influence of Welles on Fincher seems unquestionable, but it also reveals a great mastery of the latter and a capacity for observation in a type of cinema from which we seem to be so far from today. Well, certainly in the construction of a film several talents converge and not only that of the director. In Mank there are also Erick Messerschmidt in cinematography and Kirk Baxter in editing, frequent collaborators of Fincher.

This collaboration of talents in filmmaking is evident and fluid, with consolidated teams where perhaps egos have learned to manage. The development of the Citizen Kane script, however, would not have been peaceful, nor the result of a collaborative work, so the mystery about that truth has fueled literature, TV movies, films as in this case, and endless discussions. It is interesting that after Mank the concept of "author" in cinema is once again brought to the forefront. A debate that generates opinions and that national legislations have resolved in different ways by the imposition of words.

In that line of didactic role that Mank has, it is worth mentioning very interesting sequences such as the one at the beginning in which the MGM writers are gathered and among them Herman M., in theory working collectively to produce a script. It is an act of zero creation with a stenographer dressed as a vedette in a room full of men, trying to provoke a brainstorm that never comes. The same is true of the sequence in which Louis B. Mayer receives the Mankiewicz brothers in his studio and, while exhibiting a bit of his moralistic training, gives a brief definition of what cinema is, or rather of what the film market is, when he rushes down a long corridor and the camera "follows" him in close-up: cinema is the only product in which "the buyer gets nothing for his money, except a souvenir...what he buys still belongs to the seller".