My Setup as a One Man Guitar Band - Pt.1 The Drums

As i am finishing now the recordings to my new song 'Goes down like a stone', i thought i take the chance to give an insight on how i create music, and the tools i use.

First of, i play guitar, acoustic guitar (who would have guessed by the name ;). My goal is to play everything just utilizing my guitar and voice. As i don't like loop stations (i feel restricted by loops and consider them to static), i had to look for another way to provide myself with the sounds i need.
Of course, the obvious choice is playing fingerstyle guitar.
One of my cycles is named re-plugged. Within that i try to emulate a Band as best as i can with before mentioned instruments. Initially i came from the electric guitar, and that Band feel is still something i am craving for. I won't dig into the reasons here why i am not just simply looking for a drummer and bass player , just take it as given, that i have given up on that.

So the first and most complex part is to create a drum sound with the acoustic guitar. By playing it's just utilizing percussive techniques, like it's common with modern fingerstyle guitar. It's the sound part that needed some research.
To create a Kick sound i partially use the Line out of the guitar's built in preamp, and added a microphone to capture more of the percussive sound. For this task i use an AKG C411, located near the bridge of the guitar (inside the body). It took some time to find the sweet spot to give enough Bass by still picking up the the edgy part needed for Snare sounds.
The Snare sound was really difficult and took a lot of experimentation. After a while i settled with a Piezo Pickup that triggers a ddrum Modul. The Snare Sound is therefore a mix of a sample, triggered via the ddrum, and the C411. 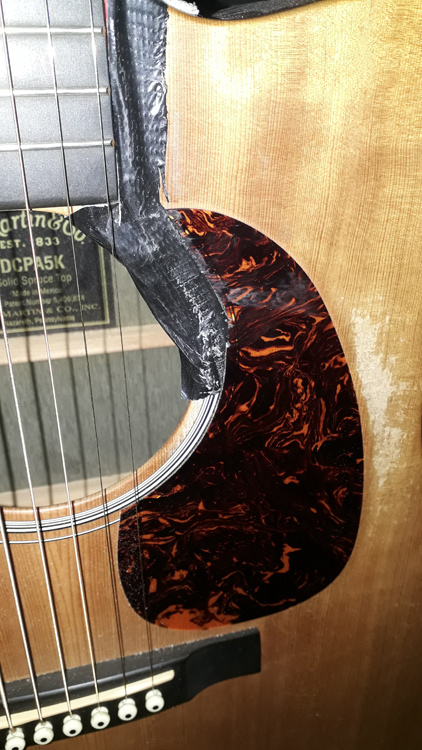 Underneath the black Tape at the edge of the sound hole is the piezo trigger (i snap it with my finger while playing). The rest of the Tape covers and leads the trigger cable to the other pickup cables. For the reason to easily change the pickup, i decided to not run the cables inside the body. I got three cables coming out the guitar(Preamp, Microphone, Trigger)

The Piezo Trigger connects to the Snare in of the ddrum Trigger Modul. Live i get the sounds from the AKAI Sampler (MPX 8) on top of the ddrum, when recording i capture the MIDI Signal with the DAW (Git Snare Trigger MIDI Track on the Image).

Of course it's a big difference between recording and live, as you have to minimize cross talk with other instruments when recording. That's why i usually record the Drum parts separated from the Guitar/ Bass Part. That's one of the most difficult things, deconstructing an arrangement created to be played live at once, to record the parts as individual instruments. Here's a snapshot from the DAW and the Drum Tracks: 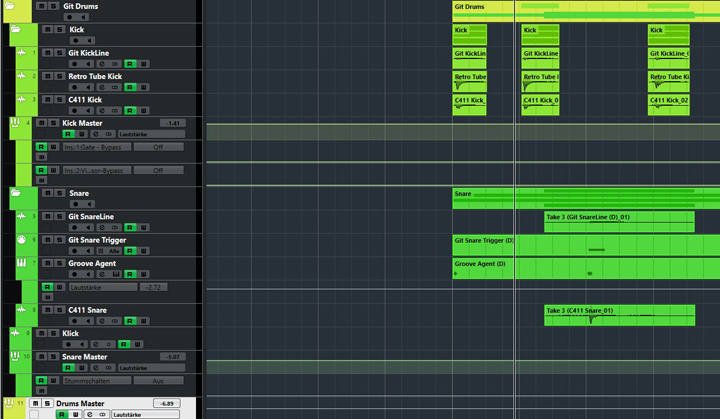 I mostly place another microphone in front of the guitar (bridge) to have an alternative sound source. In this case i used a T-Bone Retro Tube II.
This Setup is also the reason you will hear no Hi-Hat on my recordings, i simply got none :) Tom Sounds can be played by hitting the body on different spots.

One issue using a guitar as Drum set on recordings is that it's quieter than a real Set. Usually you could use a Gate to 'clean' unnecessary artifacts from a track. I figured out that it's best to edit out the parts that would be gated out. With gating i have the problem that not all artifacts are cleaned, or the attack of the sounds suffer when gating hard enough.

Next time i gonna explain how i do the Bass and Guitar sounds.

Stay safe Folks, and have a wonderful week ahead!

Here you can find the second part:
https://hive.blog/music/@acguitar1/my-setup-as-a-one-man-guitar-band-pt-2-guitar-and-bass