Hello Folks, this is kind of a second introduction post. It's for my alter ego Ac G. I gonna do this here in a more free write style, so please be indulgent.

I want to ponder over these last five years i am doing music as Ac(e) G, what the idea behind this "Project" is to me.
To be honest, naming it a Project comes not up to what it really is to me. It's about being in my perfect acoustic guitar world, and i love being there. 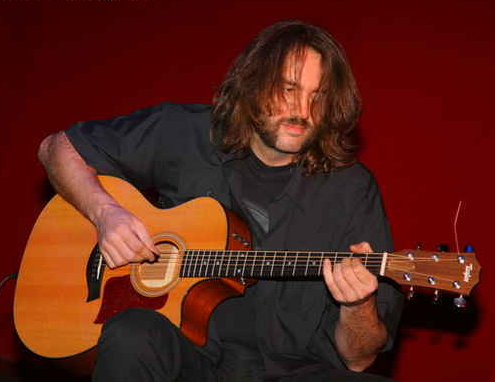 As some of you might know my name is Wolfgang 👋 Ac G simply derives from searching for a name, and a funny coincidence. Basically it derives from 'Ac'oustic 'G'uitar (hah?, get the idea ;) Once pondering on a hot day with friend on cool names, he came up with: AC's are cool (Air Condition, yes it was a hot day:D A.C. or (spelled ace) sounds some way pleasing, and with the 'G' it makes kind of sense🥴

From where do i come, in a music way
Till 2014 i played electric guitar, always with bands, in a lot different styles (like jazz to hardcore). I once even made a living of that. After rearranging my life in 2009, i went for the IT branch. I did still jam with friends, played e-guitar for relaxation, and sometimes gave lessons. 2013 a friend of mine asked to help out in his cover band , and somehow i got stuck there till 2016 ;)
In June of 2014 i saw a Jon Gomm Masterclass Video, and was blown away. That's what i wanted to do, playing all instruments, including drums on one acoustic guitar, without loops and quite a big sound😁 First i practiced fingerstyle guitar throughout the rest of the year to provide that basic technique for what i had in mind. 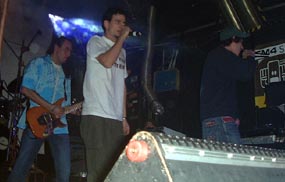 With the Hip Hop Act 'wiespät'

Changes of Style?
In 2015 i did my first gig in February, followed by more through to 2018. playing local venues, accompanying spoken word events, some charity events, and a small guitar festival in 2017. Besides all of that i did record my compositions and released them via a distributor to all common streaming portals, and of course CD's at my gigs and web shop.
The first release, from 2015, is the Album One. It's basically a mix of Blues, Folk-Rock and fingerstyle instrumentals, played all unplugged. In 2016 id record 'Dreaming', an EP with fingerstyle instrumentals. This resulted from learning how to use Effects on the acoustic guitar (Modulation, Reverb...).
In 2016 i changed my day job (still IT), and time got less, so i decided to only go for the acoustic guitar, and leave the electric guitar and Bands behind.

Re- Plugged
But I had a certain sound in my head for a re-plugged solo acoustic guitar. As i really love to have a back beat with drum sounds, i experimented to provide it, also translating it into a live situation. In 2017 the first attempt on re-plugged concept was released. 'Black Magic'. A kind of White Stripes approach to a Rock Song, but played solely on acoustic guitar, and that sound really worked out. Since that time five more singles were released on the re-plugged cycle

The issue with the arm
In summer 2018 suddenly my right arm started to ache, and even got paralyzed, taking me 4 months to regain basic movements back.
This is also the reason why the 2018 release 'Goodbye' has got a piano, and mostly choir on it. I had to stick with my possibilities ;).
After various diagnosis and Treatments for orthopedic issues, it turned out that i had such vast tensions in my shoulder and breast muscles, the nerves leading to my right arm got jammed. I still haven't recovered in full, and that led to the creation of 'Handpicked by the Night', where i took up a plectrum one night , the first time since 2016, and played without big issues. From that Jam the songs for 'Handpicked by the Night'emerged.

What's the resume?
First of, i love my acoustic guitar(s) :D
I learned a little bit of fingerstyle guitar, and did create an idea for a one man guitar band.
It's an deep inner urge to me creating songs. A needed way for my emotions to be released.
I rebuilt my Atelier (several times), and finally got the setup that's provides a great workflow for rehearsing and recording.
The importance of health, and how precious the hours are we can spend with our beloved ones.
And, of course: a year ago i discovered #Crypto, #Blockchain and #Hive.
A big #shoutout to @atomcollector for leading me here.

Where to go?
Next target is rehearsing a short set to get fit again, and getting into live streams. But the first stream will come this year!
While jamming with the re-plugged sound i already had ideas for new re-plugged songs.
I really do see a great Future from the crypto world, not necessarily understanding it's full capacity.
Considering all the time, and advances for gear over the years, i am far from breaking even. That's something that could improve.

I wanted to keep this short, apparently it didn't work out XD
If someone wants me to go elaborate on any points mentioned above (like used techniques, and gear, or workout tips for severe muscle tensions :), feel free to ask.

Hope i didn't bore you too much ;)
Enjoy your day, and stay safe!

P.S.:
for further links you can visit my website ac-g.net too.
dtube