It's now two years i first planned doing Live streams. But shortly after i got into the topic, i had bad luck, meaning the injury of my right arm and shoulder. I am still working to get my health back to where it was before that point. About two months ago i started rehearsing again, and if it wasn't for the lock down situation i would have had my next gig on 13th November. So i decided to do a Live Stream on 3Speak instead. I can't give you the exact time by now, but i guess, it will be in the evening UTC time (British Time).

Of course i had go through the entire gear i need, and overhaul it for that situation.
As i try to engage it like a regular gig, and try to provide at least a little of listener / watcher experience, things like OBS and light have to be controlled by myself, without too much clicking around on a screen.

Therefore i re-programmed my foot-board to control OBS, Lights, and of course all of the music gear i am using.

First is my 'standard' music gear 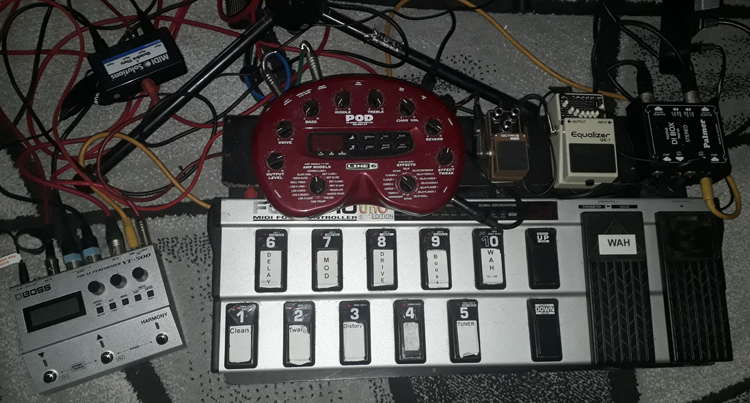 The Controller i use is a Behringer FCB1010 modified with a UnO Chip. This way the upper row of the switches work as Stomp boxes (the switches on the image are named with their functions).
The lower row is used for the Sound Changes, OBS, and to control Light settings.
I wont go into details of my sound here, as this is a totally different (and quite big) topic. Basically, the first two switches are sound control ( Line 6 POD 2, Boss VE 500, 3rd and 4th are just Light, and the 5th is to control the Harmony effect on the Vocal Preamp.
The Controller is also connected to the Midi In of my Audio Device (Focusrite Scarlett), to control OBS 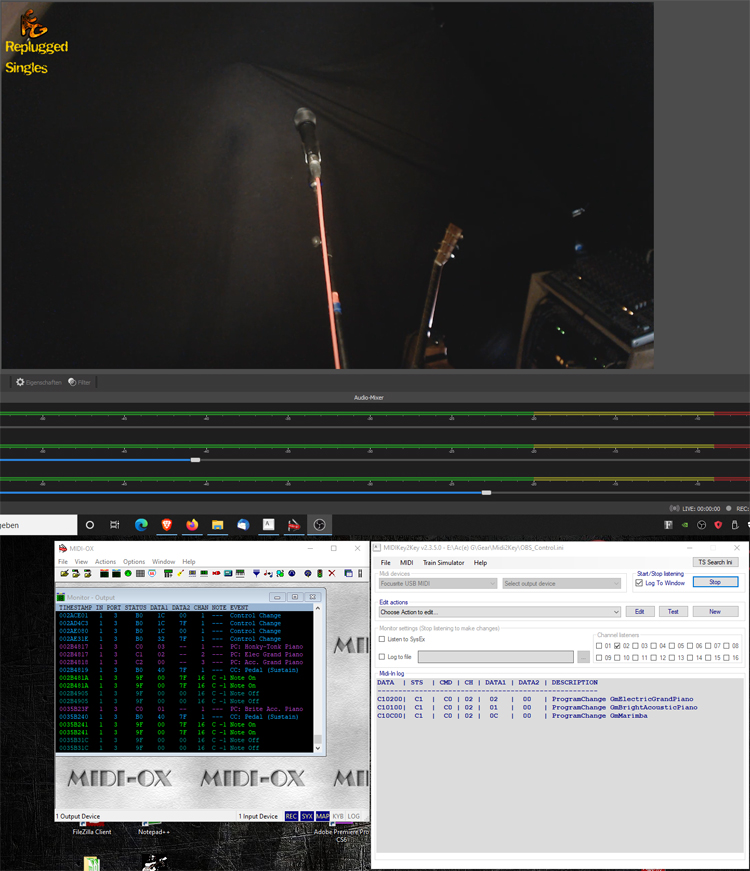 On the Computer i utilize the Midi2Key Software to translate the Midi messages into Keyboard actions (Key Strokes) for OBS.
I also run an instance of MidiOx to pass Midi messages to the Light mixer.
I could have used a direct Midi connection to the Stairville DMX Master I but as the Midi controls for that device are quite limited, i wanted to provide additional functionality (like Chases) from the PC. As the setup i have built for that isn't stable enough, it will take more research to get it done, till that time, it will run in 'basic' mode. As soon as i have managed to make it work reliably, i will post an update.

I hope you found it interesting, and i would be pleased if you join me on my first live stream, coming Friday.
Stay safe and well, my lovely ones!

I've long fancied one of those foot controllers. Hope the streaming goes well.

Hi @steevc, big thanks! I can really recommend the fcb 1010. The one you see on the image is with me now for about 8yrs, and did see some harsh conditions (and is still working without any issues). Specially the price is is unbeatable. Even with the UnO upgrade, it's less than half the price of comparable controllers (below 200$ with the UnO upgrade, including the UnO Software editor with license. If you use a free editor, it's about additional 30$ off. That's the UnO website). Due to reason that behringer didn't have the best reputation on longevity back in the days, i even bought a second one (it was a bargain offered by a friend). The switches they use on the board are the same like Roland's, meaning they are really durable. The best thing is that it got two additional manual switches, if you want to control an amp (channel or fx).
Stay safe, and cheers!

Hey @acguitar1, here is a little bit of BEER from @steevc for you. Enjoy it!