Hiking to the top of Phu Kra Dueng.

Being rushed for time I couldn't spare 3 days for the trek-and-camp tours they lead up Phu Kra Dueng Mountain in Phu Kra Dueng National Park! I checked out their tour itineraries and it seemed rather slow-going. The benefit of these trips was that the guides/porters would carry all of your overnight luggage- a little lazy if you ask me- plus I never really like being led on a tour.

The trail was clearly marked and didn't break off. I decided to walk alone at my own pace. I wasn't going to stay over night so didn't have any heavy luggage- bottles of water, snacks and camera equipment in a small day sack.

I left early and met my first sign. It was the break down of each section of the trail- a lot further than I first thought.

The mountain is famous for its flat plateau on top covered by grassy savanna, but to get there you had to walk from the bottom.

From the car park to the top/edge of the plateau was 5.5km trek of steep mountain paths.
Once at the top it was a 9km flat walk skirting around the southern edge of the plateau to the view point. This particular view point was popular for its photo opportunity of an over hanging rock sticking out from the cliff. 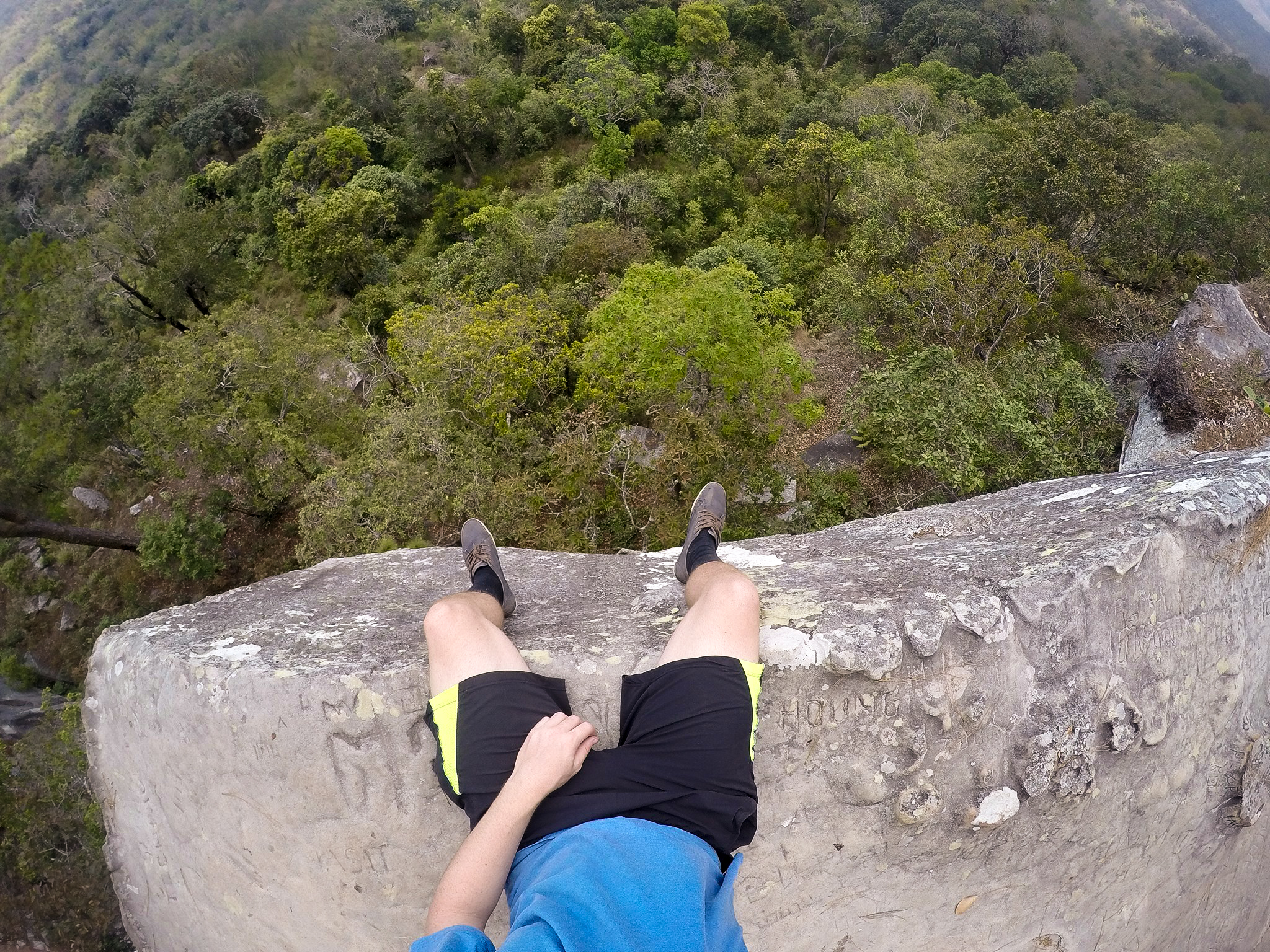 With that in mind I knew I had a solid 14.5km walk there and 14.5km back- and I had to be back before dark. The first climb was the longest and most grueling part. Over the entire 5.5 climb, there were no flats, just continuous step ups. 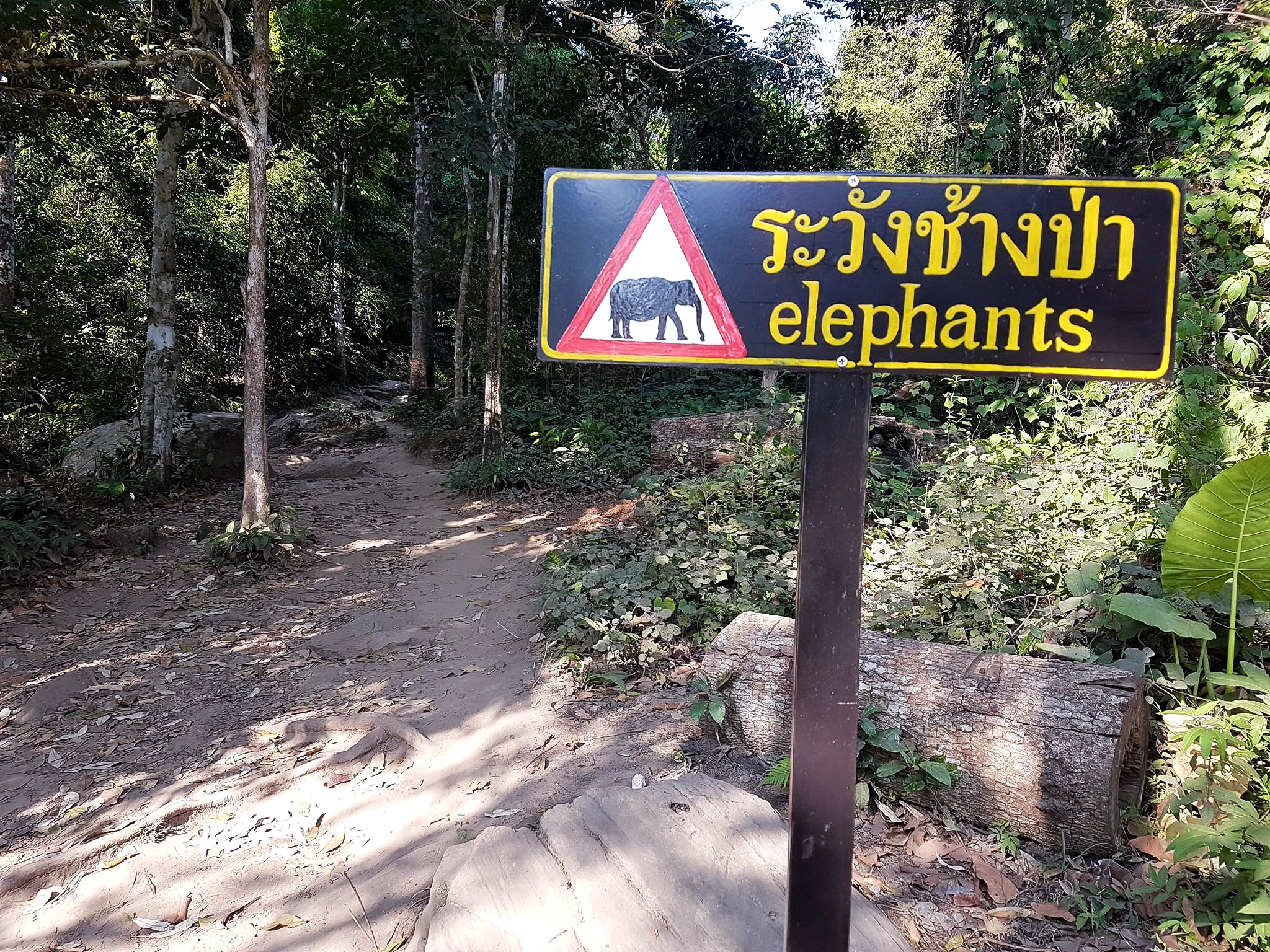 A sign for elephants made it feel a little more wild and fresh dung signaled that maybe they were near by. It was hard to tell how high I had climbed because the thick forest canopy blocked the view for most of the walk up. The higher I got the more rocky it became. Stairs and ladders had been built to help trekkers get up and over.

At the top, the steep path stepped out onto flat grassland. A sign directed the tour groups and campers to the right and another sign directed me to the left- the cliff edge path. 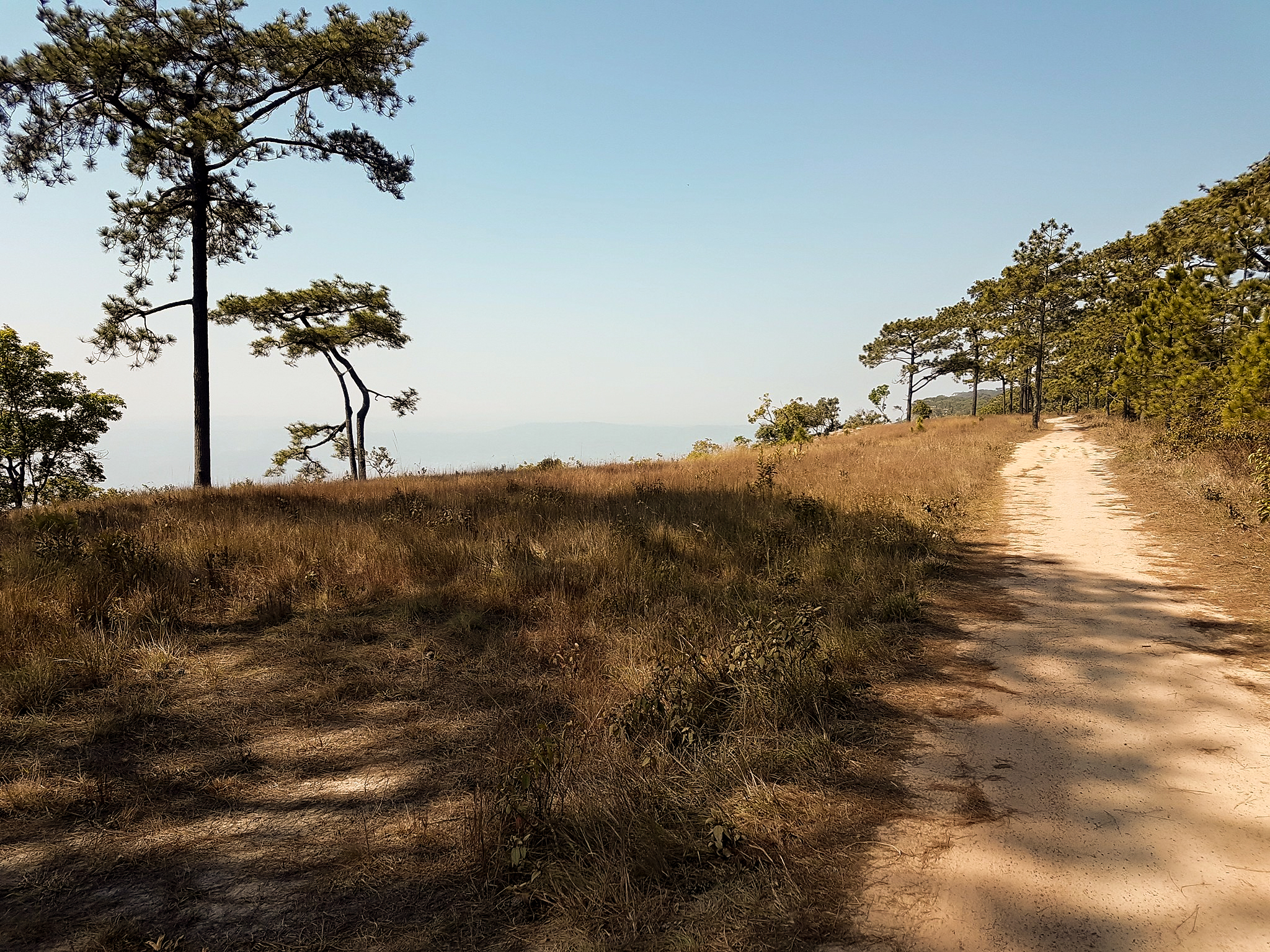 Every few kilometers locals had set up wooden huts. They lived in them and sold drinks from them- this was a real life-saver as I had already drank my 4 bottles.

The cliff edge path didn't really change over the 9km stretch but did produce several amazing view points and cliffs.

The start point was somewhere at the bottom of the lowest valley in the photo below. 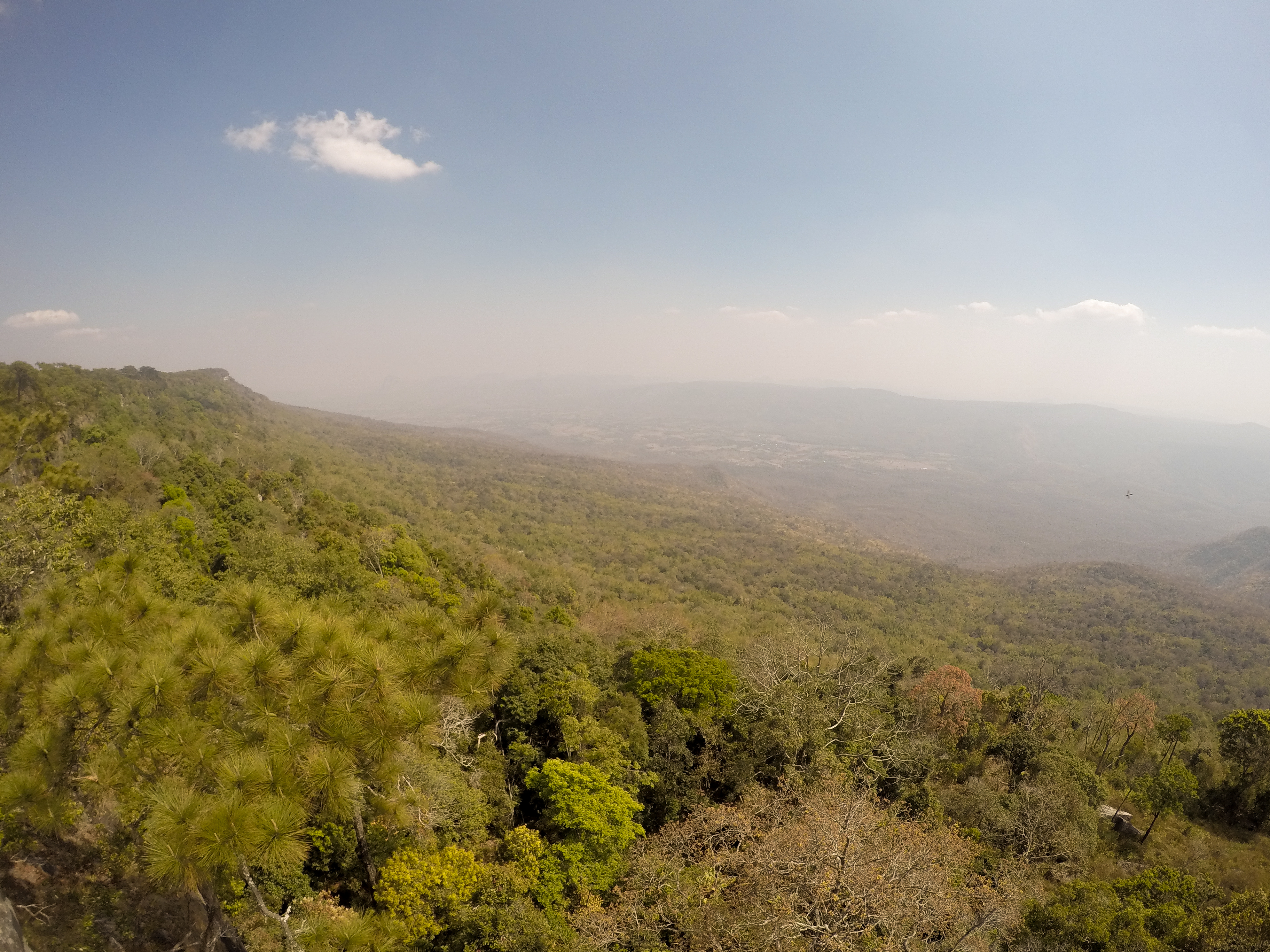 The path continued and as my feet were getting sore, I arrived at Lomsak Cliff- the main view point. I don't know if it was because I had left early that day, or if it was a quiet day but I hadn't really seen anyone else around- literally no one. This made all photos even better- the view and only the view. 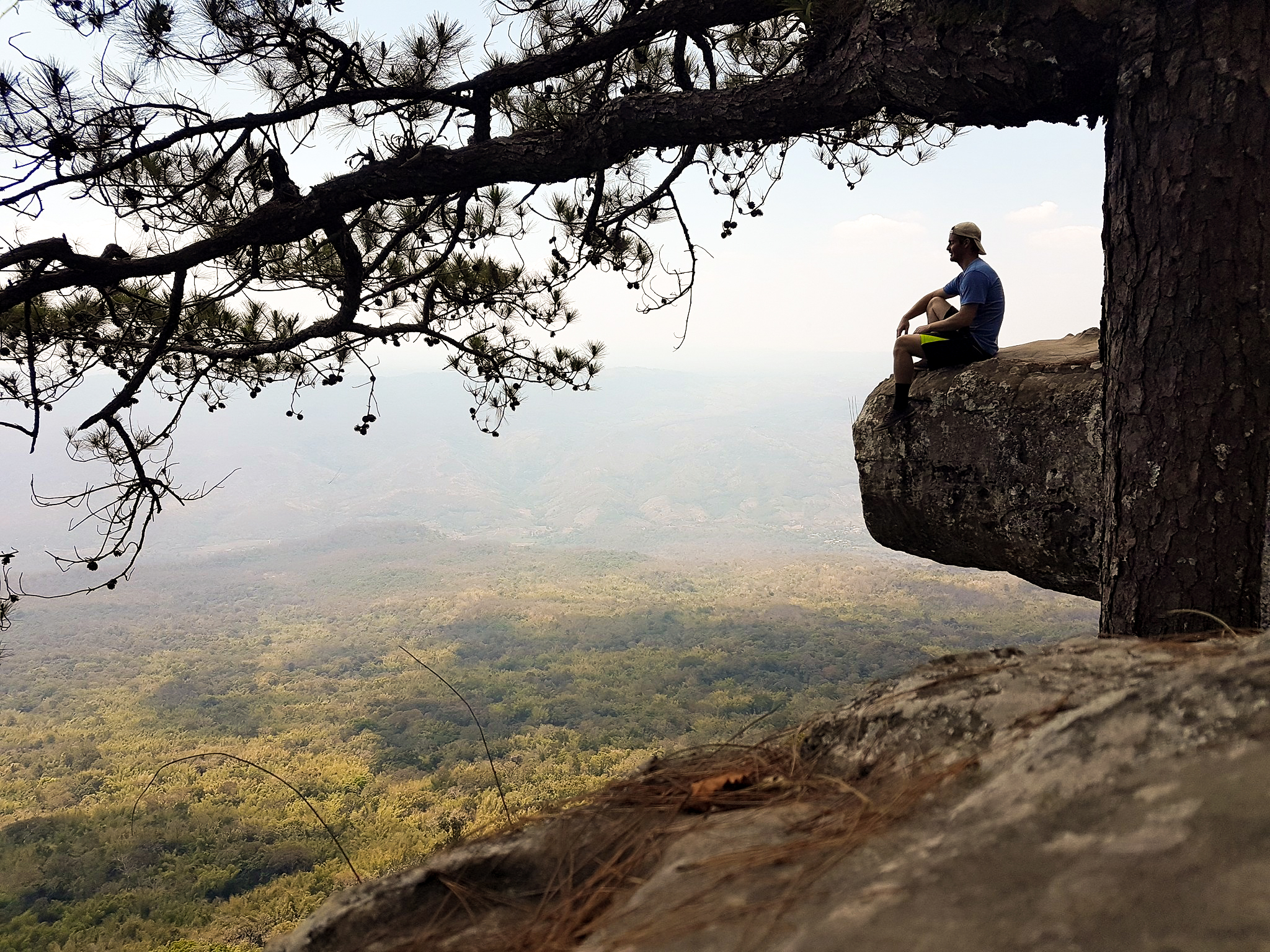 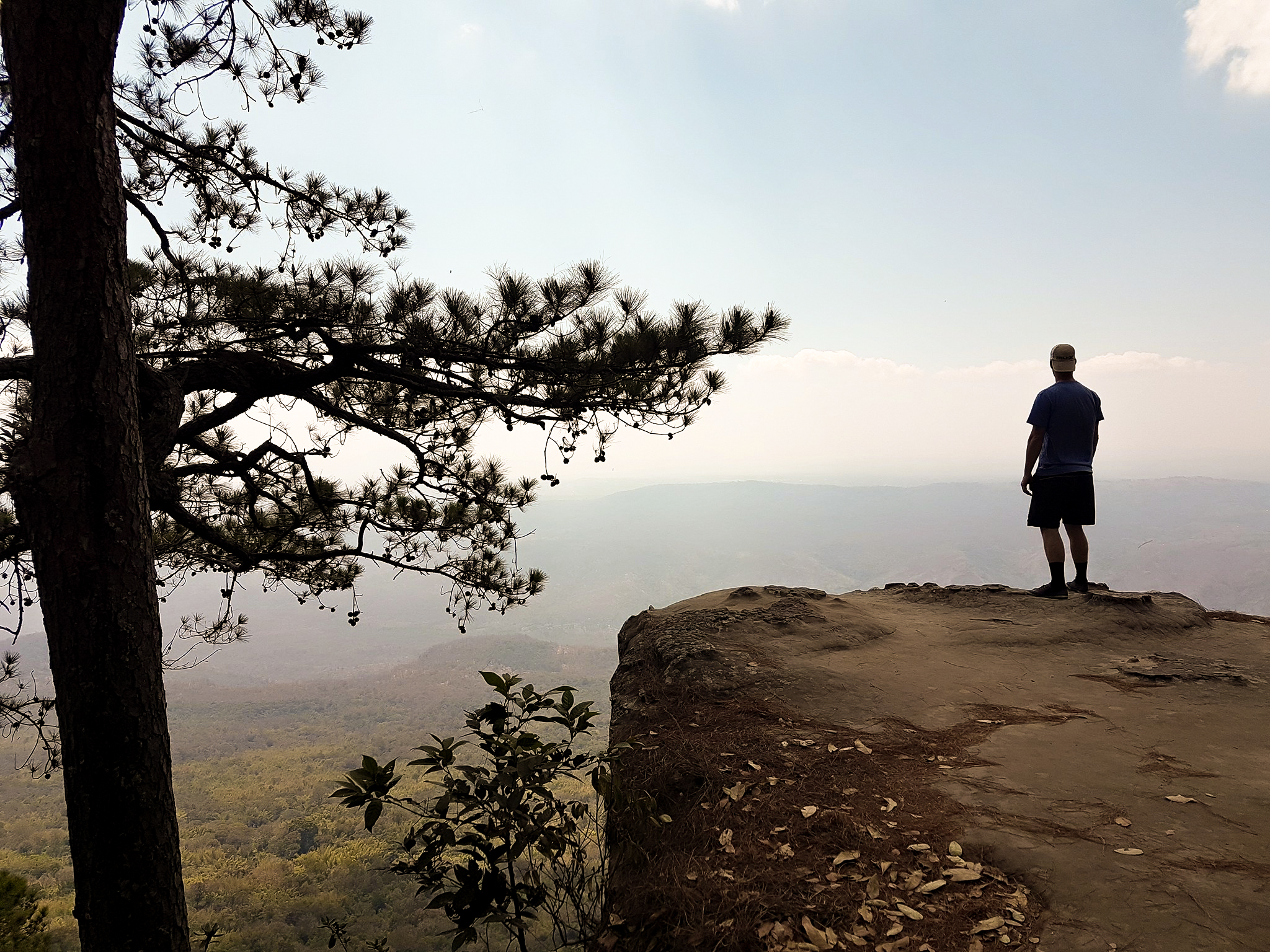 While taking in the view sat on the edge, the sound of those wild elephants 'trumpeting' broke the silence from somewhere in the forest down below. Very exciting and it was a great knowing that there are still places in Thailand that provide suitable habitats for these massive animals.

The walk back was the same- a great view to my side and soft sandy paths. A few more photos on the way back and then an easier hike back down. 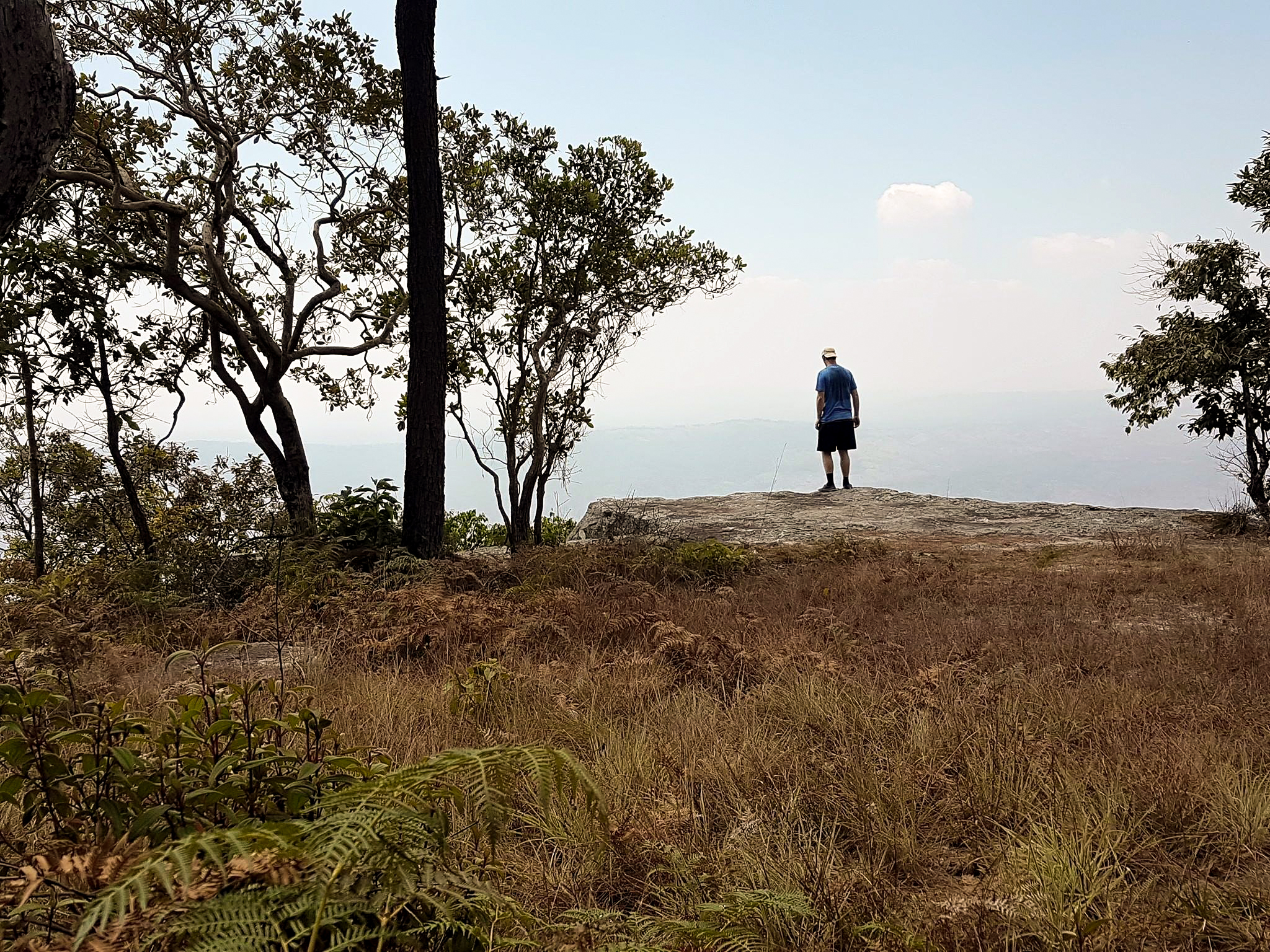 I managed to get back about an hour before sunset. My feet were very sore. Definitely worth doing, and worth doing in a day- 3 days might be a lot of not much.