Big Brother strikes again against free speech, the target this time is Flote and the method was taking down its official app off the Google Play platform.

Flote (@floteofficial) is a social media platform based on the Blockchain software with its dedicated token. 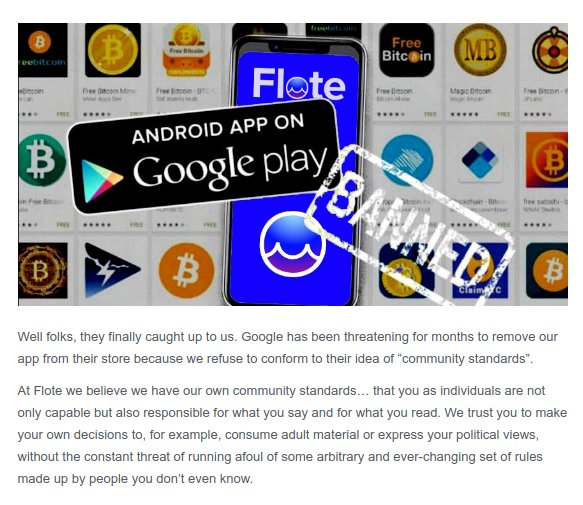 I received an email update from Flote stating:

'Google has been threatening for months to remove our app from their store because we refuse to conform to their idea of “community standards”.'

The email detailed what happened and I'll quote their reaction and why they refuse to conform to Google's so-called 'community standards':

At Flote we believe we have our own community standards… that you as individuals are not only capable but also responsible for what you say and for what you read. We trust you to make your own decisions to, for example, consume adult material or express your political views, without the constant threat of running afoul of some arbitrary and ever-changing set of rules made up by people you don’t even know.

Surely, Google Play doesn't care about 'adult material' otherwise they'll take down Facebook and Twitter's apps, for instance, it's all about politics, very much similar to some 'whales' in Hive and Steemit who suppress political views that go against the Pentagon's narrative, ask me about such cheap heinous acts by those whales, or better just read this: REPOST, Previous Post Censored by HIVE Whales: Syrian and Russian Air Forces Destroy Near 6000 Hospitals in Idlib! which itself was downvoted wholeheartedly by those 'whales' based on the political reasons they stated and which I included in the post.

Big Brother will resort to any method to silence the critics of their governments, now with all gloves removed and all masks fallen down, those same people who invaded countries, like my Syria and Libya, based on the false claims to 'democratize' and 'promote free speech' have shown their disregard to free speech and democracy in their own countries in the way they are handling the dangerous people with 'unacceptable opinions' that do not comply with the dictates of their government.

The Pentagon and its patrons: the Military-Industrial Complex, Big Pharma, Banksters, Oil and Gas, Drugs Cartel (sometimes referred to as the CIA), and through its clowns aka the White House Junta and through its control of the Congress (only 2 parties) cannot afford but to divert the attention of its people from the horrific economic situation the 'empire' is going through with the public debt exceeding 30 trillion dollars in the US alone, and trying their best to ignite a massive regional war or more in that process, people who have time to look at the data and the practices of their politicians will easily see the large-scale corruption in their regimes that led to the current situation and those people who have time to look will apply logic and common sense and would unite against those politicians who serve the real owners of their countries, not the 99.9% of the population.

----
Your objective comments are always welcome.

Donations are highly appreciated, just click on the Donate button via PayPal or Credit Card: Donate.

You can also donate with Hive or HBD or even delegate some much-needed HP.