Caesar, Calphurnia, and the Coronavirus 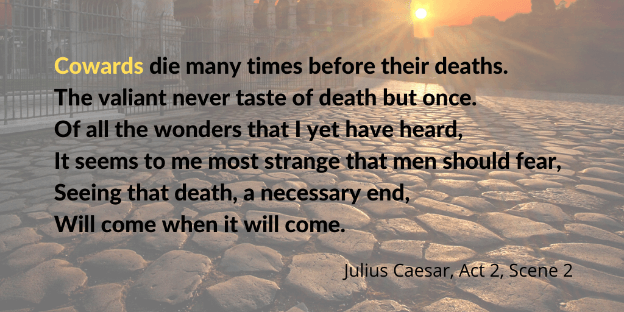 What on earth does Julius Caesar have to do with the coronavirus?

Well, in Act Two, Scene Two of Shakespeare’s play, Caesar’s wife, Calphurnia, feels it is too risky for Caesar to go out to the Forum that day and urges him to stay at home. Staying at home is something the coronavirus has caused many of us to do either by force of law or, as in this case, by persuasion.

At first, Caesar rejects his wife’s plea. He replies that nobody can avoid their fate if it has been decreed by the gods, and that the bad omens are general to all the world as to Caesar. He says,

Cowards die many times before their deaths,
The valiant never taste of death but once.
Of all the wonders that I yet have heard,
It seems to me most strange that men should fear,
Seeing that Death, a necessary end,
Will come when it will come.

He does not deny the validity of the omens. Instead, he expresses the heroic view that since death is inevitable it should not be feared.

That was more or less my view of things as Covid19 began to spread out of China. Stay at home, we were told, or if you must go out, wear a mask. It all seemed like a lot of panicky fearmongering that one would expect among a latterday generation of cowards.

“Caesar Agrees To “Stay At Home”

However, when a servant reports that the augurers would prefer Caesar not to go out, and Calphurnia pleads again with Caesar, he agrees to stay at home for her and her humour’s sake.

When Decius, Caesar’s friend, but actually one of the conspirators, calls on him, Caesar tells him that he will not go to the Senate that day – with the emphasis on Caesar’s “will”:

Cannot, is false, and that I dare not, falser:
I will not come today: tell them so, Decius.

I too stayed at home, not because I could not go out, there was no lockdown in Japan, nor because I was afraid to go out, but because, with no compelling reason to go out, and with much to do at home, to stay at home was something I was willing to do – it was, if you like, for my own humour as much as anybody else’s.

Actually, what persuaded me to take precautions more seriously was listening to the Audible version of Nassim Nicholas Taleb’s book, Antifragile and especially his concept of “panic early.”

Note, the term “panic,” as with much of Taleb’s colourful style, is delivered very much tongue in cheek. The idea is to take preventative measures very early, at a stage when other people may see your early response as “panicky” when, in fact, it is measured and rational.

Here’s a video I made of my first trip out of doors for a week, back in early April, in which I report that I have taken on board Taleb’s advice after listening to Antifragile:

Persuading Caesar to Seek a Crown

Let us return to Caesar. Caesar has decided, of his own will of course, to humour his wife and stay at home, not out of fear, and not out of a lack of ability to go out. He had intended to send Mark Antony to tell the Senators, but since Decius has called on him to fetch him to the Senate, Decius would be a convenient messenger.

Now Decius, whose aim is to make sure Caesar goes with him to the Senate, uses craft to draw Caesar out:

Most mighty Caesar, let me know some cause,
Lest I be laughed at when I tell them so.

Caesar takes the bait and explains the reason behind his “will.” His wife has had a dream and “stays me at home.” To this, Decius swiftly responds with an alternative and more positive interpretation and tells Caesar that the Senators are planning to offer him the crown, a boldfaced lie that works on Caesar’s vanity:

…the senate have concluded
To give this day a crown to mighty Caesar.
If you shall send them word you will not come,
Their minds may change. Besides, it were a mock
Apt to be rendered for someone to say,
“Break up the senate till another time
When Caesar’s wife shall meet with better dreams.”
If Caesar hide himself, shall they not whisper,
“Lo, Caesar is afraid”?

And so, Caesar, persuaded, goes out to his death.

What Decius’ interpretation of Calphurnia’s dream shows us is the sophisticated human capacity to mould a narrative to suit our own purposes.

Caesar’s mistake was not that he accepted the second interpretation, but that he allowed it to replace Calphurnia’s. Better to hold two contradictory accounts of a single narrative simultaneously than to reject one in favour of the other without any additional evidence either way.

Thus, for the duration of the pandemic, I have held on to two contradictory views, namely that it is indeed a highly dangerous virus against which precautions should be taken, and that it is a relatively mild virus, not much different from the flu (of which thousands die every year).

Caesar is persuaded to go out and join the crowd of senators for his own sake – his hopes for the crown – “corono” in Latin, and “corona” in Italian – rather than stay at home for the sake of others, in particular for his wife and family.

Not for our Own Humour…

For those of us who are the least vulnerable to succumbing to the virus, the benefit of staying at home – or of wearing a mask when going out – is not so much for ourselves as for others, a point Taleb has made in some of his recent video discussions.

Caesar, however, feels “ashamed” for having “yielded” to his wife’s “fears” and turns towards his death as a man no less vulnerable to the persuasive rhetoric of others than the rest of us, having changed his mind twice during the course of the scene, speaking of his own will while being malliable to that of others; his valour in the face of death is not so much diminished as thrown into a new light by his all too human vulnerability to persuasion and personal vanity.

This article was first published on my Wordpress blog at:

Congratulations @hirohurl! You have completed the following achievement on the Hive blockchain and have been rewarded with new badge(s) :