A good archer is not known by his arrows, but by his aim (A Xenith Archer Splinterlands battle challenge /+contest)

mightyrocklee (65)in #splinterlands • 3 months ago (edited) ***If you read until the end, genuinelly comment with what you think about this post, and you will enter automatically in a raffle to win a Gold card. Winners announced in the next week battle challenge post. The winner for the last post was @luizeba, and the Gold Pelacor Deceiver was already sent to him/her.

Splinterlands is a card game, similar with Hearthstone, where you can play battle against other players to get a better rank or in tournaments. It is a NFT game based on Hive Blockchain, with multiple ways to capitalise and make money, real money, by playing it or trading in it. You can start earning as soon as you buy a Spellbook ($10) getting DEC tokens and NFT monster cards via daily quests and season quests (every 2 weeks). There is an airdrop daily, for a whole year, currently at day 340/365, I think, and you can still get some nice governance tokens just by playing the game for the next few months (25 days left). Everything counts, cards, DEC on HIVE, WAX, ETH and BSC, lands, titles, skins. You can maximize the airdrop by staking all you SPS for a 36.8% APR right now. Holy Molly! I got one validator, and all the licences from the pre-sale were sold in 12 minutes. You can buy one in the Tranche 1, paying $3000 in SPS. You can get it much cheaper (around $1300) if you buy 500 Vouchers and use them when you buy a licence. Another way to make profit is to rent cards, getting paid in DEC tokens for it. But, my, oh my, the renting price right now is so, so low. Check the contest at the end of this post! We can buy still Chaos Legion packs with 4$, using just Credits. Even then, if you want to get the extra packs, you still need vouchers, but just for the bonus packs. An awesome hint from a really good player (not me), if you open your packs after the Legendary summoners are introduced, you have a small chance to get them from the packs. It was announced that Lands NFT and Riftwatchers pack are coming in the third quarter now, with the new Roadmap proposed by Splinterlands. Just check this awesome page about what are the Lands supposed to do.

The Xenith Archer is a Rare Neutral Unit, with 2 Ranged Damage, 4 Speed and 5 Health, costing only 2 Mana at max level 8. Has no skills, but it is useful on low mana battle, with both Fire and Life summoner boosting Ranged Damage. Other than that, Little League ruleset can be also added to the previously mentioned summoners for an enhanced effect. I am not using it very often. 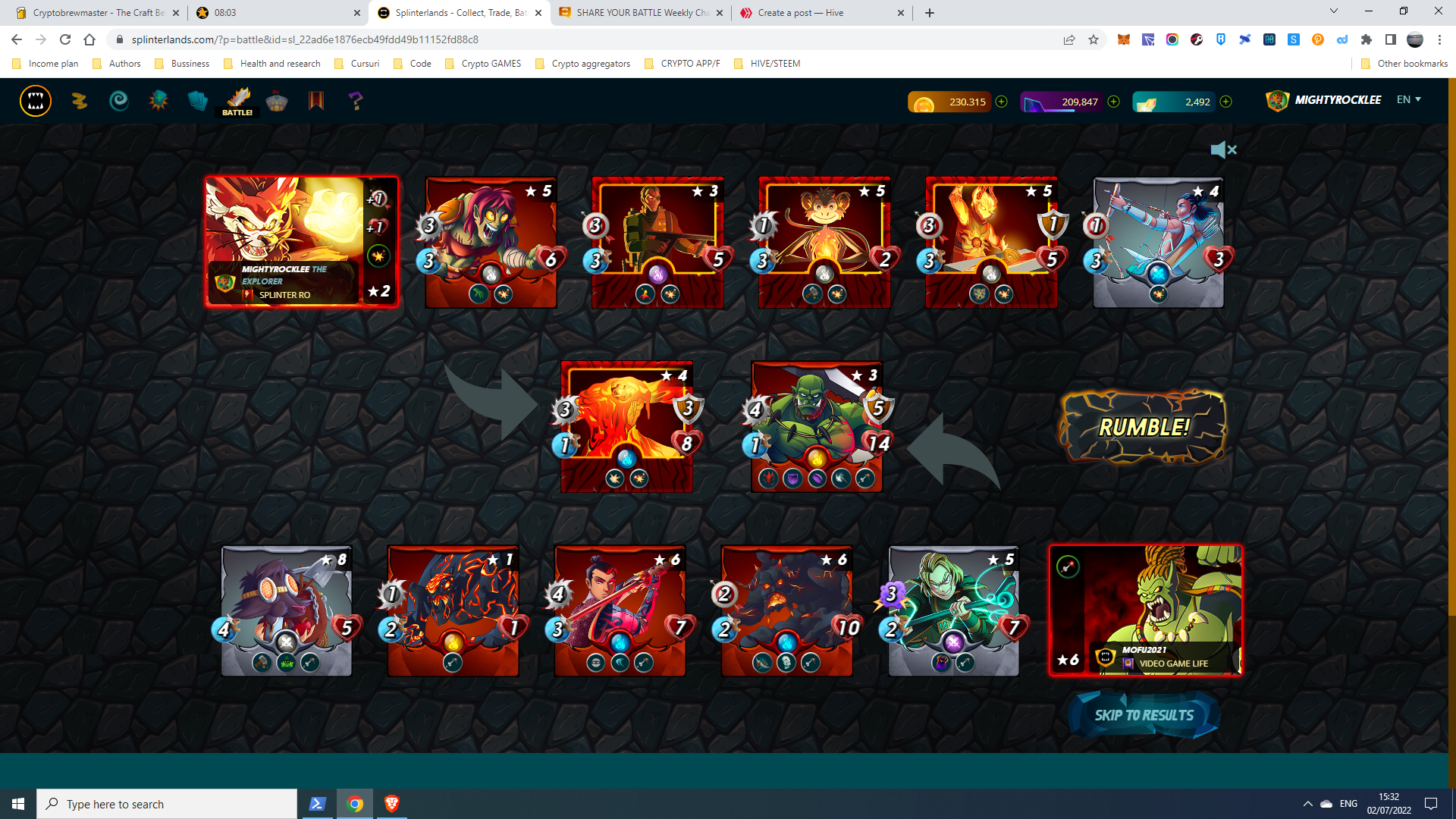 (To see the video, you can check the battle link.)

So, for the challenge, this were the starting conditions:

Mine - Summoner: My summoner was Yodin Zaku, boosting Health and Archery by +1, also adding Blast to the Ranged units, as I had the Fire Focus today, with the Living Lava as main tank, using Shield skill to reduce damage from Ranged and Melee, backed up by a Radiated Brute attacking from the second position with Reach, a Flame Monkey to repair Armor, Ferexia General with Snipe, Flamesmith with another Repair Skill and Shatter to destroy the opponent Armor, as Ranged Damage. A Xenith Archer was added to test it, for the weekly battle challenge.

Opponent - Summoner: Quid Duff, with Piercing, puting a dent into my Armor and Repair combo team, with Grum as main tank with Void and Void Armor against Magic, Bloodlust and Giant Killer skills for extra damage , Magi of Chaos with 3 Magic Damage on the second position and Opress (double damage on enemies with no attack), Molten Ash Golem with an useless Close Range skill, and Weaken (decrease Health by -1) , Tenyii Striker with Sneak and Dodge, and the last two, Schorch Fiend as fodder and a Scavo Hireling hiding in camoflauge, with Armor Repair.

This was a interesting battle, and the teams were both balanced. My Xenith Archer dies first, sniped by the Striker, followed by the enemy Magi of Chaos. Then I manage to kill the Ash Golem, only to quickly lose my Flamesmith. The battle is raging on. In a stroke of luck, I manage to kill Grum, and without him I am killing the remaining cards one after another until the end of the round 4. I won.

Star of the game - Not a card, but the Repair skill, being the one keeping my tank alive and well, even against a Piercing team combo.

On the side note, my continuous support for Splintertalk.io is going well, with my SPT tokens number raising over 1 million. All of it is delegated to @monster-curator, as this account is doing a great work curating the best posts on the forum. I have finally reached the needed SPT power (110K at the moment) to manually curate on Splinterlalk.io. Also, working on acquiring 50K Oneup (28100 UP now) next, inspired by the Cartel efforts. Bought 200K Level too, for PsiberX airdrop, as I also managed to round up 100 Hive to buy a piece of Land in their game. Got 4 PsyberX packs already on airdrop in the last 3 months. Happy to have them!

Also, if you are posting on Publish0x and Read.cash blogs, and you liked the Chifibots game mentioned in the latest OneUp Cartel posts, there are still 4 prizes to be won if you want to get some of their NFT packs on this contest, open until the day they launch.

All the best, George

...get the higher rewards for your investments using Blockfi, Hodlnaut and Celsius.network. Get crypto while writing on Publish0x blog, using Presearch search engine to maximize your income with PRE tokens. Use Torum instead of Twitter . I am also writing for crypto on Read.cash and Hive.

Your Splinterlands post has been manually curated on behalf of @SBTOfficial by @sgt-dan. Check out our partners' projects to find more play2earn opportunities!

IMPORTANT NOTE:  Splinterlands Battle Token (SBT) is not officially endorsed by SteemMonsters, Corps (Splinterlands).
Curator Comment:
Very nice of you to have a giveaway as part of your challenge submission! Good job! On behalf of the community, thank you!
$0.00
Reply