To spice up the recent massive success the introduction of The Splinterlands' NFT minting with the WAX NFT partnership we need more auctions. So I will be listing 100 auctions (at least-very likely many more) ending in the next 100 days.
The first wave of these auctions will be ending within the next 6 days

View the link below to check out all of my current auctions
https://wax.atomichub.io/profile/wfdqw.wam#auctions

It's the "Wild West Days" of Splinterlands cards landing on WAX and the AtomicHub Market. Take advantage of what could be an absolute steal. A few times individual cards I have auctioned off have had selling prices of less than a penny, which is not at all a bad thing because our fellow WAXers are getting Splinterlands cards in their hands and getting exposed to the game for literal pennies on the dollar.

These auctions will include:

Multiple Lot Regular Foil TS cards... Starting bid of 0.01 WAX multiplied by quantity.
-These multiple single lots will include card quantities of 5, 10, 25 & 100. Lots include singles and duplicates as listed.

I do not own any WAX but these auctions you have do sure look enticing.

That's great to hear. To make a long story short it's an absolute game-changer for The Splinterlands in my opinion. There is a collector faction that is now getting involved in The Splinterlands that is not absorbed by ROI (which not a bad thing, just truth) but now wants low mintage numbers of NFTs [this is a quote I have robbed verbatim from fellow TS fanatic @davemccoy].

The comical meme about NFTs is that they're worthless, digital pictures that do nothing for you. The Splinterlands cards prove that narrative entirely false of course being used in an online gameplay community that is emerging as the premier blockchain game. I know you've been around for it for a really long time @mawit07 so I am telling you nothing in that last statement you already don't know.

What the vast, overwhelming majority of The Splinterlands community is not yet aware is that WAX has some powerful partnerships, including Topps "Garbage Pail Kids," and many other NFT producers that provides them with some serious upside. Take that for what it's worth as free unsolicited advice of course. I was dumb enough to love the token and this upside and not buy any a few weeks back when it was 8 cents, and now it's recently crested the 30 cent mark.

The idea behind this is that I would personally want The Splinterlands auction search to be a mandatory routine search for the routine buyer of NFTs on WAX AtomicHub. To those of us that have seen The Splinterlands emerge as a thought in the mind of two core developers to the phenomena it grows into by the day that also seems like a no-brainer, so merging both worlds could be a great thing for both sides.

But mainly I like the idea of thousands of WAX users getting these cards in their hands and getting curious to what they can do being used to play the game. That would be a wonderful very cheap way to source the game to people that otherwise would've never heard anything of this game, at least not yet.

Thanks a ton for the read and response and keep all the good things you have been doing for the game!

Very cool. I like that as the premier edition for sure. 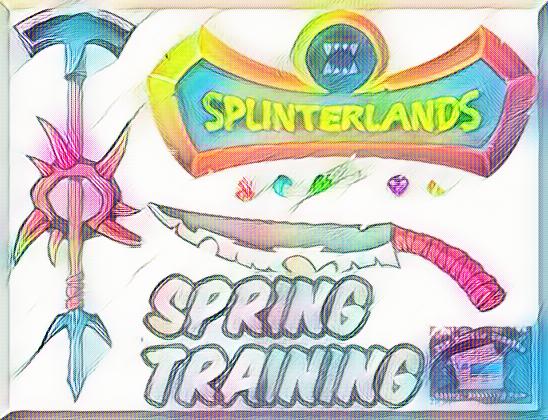 Got in to WAX now

Wow that is great @ravthijo. If you read the above ^^^ comment you will know my thoughts on the whole thing. Good luck to you and thanks for the read and response!

Great Job Crypt! I hope you have many participants and I love how you always find the interesting angles to encourage activity!