Racing Across The Moon: My "Out Of This World" Hotrod Design

"If you're in control, you're not going fast enough."
- Parnelli Jones -

Stop!  You'll want to read the beginning of this story first...

With a trip into space at stake,

there was no way I could pass up this Omni contest. And I was in it to win it; I had no intention of losing that prize.

There was little doubt in my mind that I could conceive of a racer that could run circles around pretty much anything else. I fired up some neurons and put my inventor brain to work. I knew that my design had to meet the basic Omni instructions quoted in the first installment of this story.

But what would it take to win?

My racer needed foresight, some look-ahead mechanism to scout and map the fine details of the surrounding landscape. Check.

It needed to be able to clear obstacles of various sizes—mostly boulders, modest sized craters, and crevasses—or to map and go around them. Check.

Ideally, the design should be able to traverse slopes up to forty-five degrees steep. Check.

Finally, I needed to be able to compose a comprehensive and comprehensible description of the racer in less than 200 words. Check.

The stakes were high.

An actual trip into space.

My design needed to reach even higher. My written description met all the rules.

More importantly, I think my design concept also met my intent to make my racer a superior entry in the lunar marathon. To this day, I believe what you are about to read in less than 200 words below would be a lunar-race-winning champion:

A steerable-angle balancing “ankle” connects a single spiked “foot” to a 10 meter long aluminum-alloy rail “leg.” This capacitive superconducting linear electromagnetic motor projects through a gimbaled mount in the center of the cabin roof.

Silicon cells continuously charge high-density capacitor/batteries. Rapid timed discharges drive the cabin up the “leg,” accelerating the 1500 lb. aluminum and titanium craft to its 100 kph top speed within one second.

There you have it,

my conceptual design for a race-winning entry, in less than 200 words. This thing? Not gonna cut it... ~ Image courtesy of Goh Rhy Yan

Can you picture the device I've described?

Not, it doesn't look remotely like the race car above. That car may be pretty, but it's not gonna cut it on the moon.

Looking back, a mere 200 words is a rather tight constraint for describing the MagRod Leaper. Worse yet, drawings and models were explicitly prohibited by the contest rules. Since the contest long ago, I've had occasion to wonder about the ability of the judges to visualize a design so far from the pale of convention.

But maybe I can pull together a rough 3D model for the final installment of my story. We'll see. (Update: I did.)

Making things starts in the mind.

All my intuition told me that a conventional, wheeled vehicle would be a tortise in this race. I wanted to design a hare.

The concept I ultimately settled on was like a jackrabbit, or even more a kangaroo. Like Superman of radio thriller and comic book fame, I wanted a machine capable of leaping tall buildings—or boulders—in a single bound.

I did all the math before submitting my entry. Running the numbers, I tweaked the final design to subject the two occupants to a relatively mild 2.8 gravities acceleration for less than two seconds during each half-minute leap.

For comparison, the Goliath roller coaster at Six Flags Magic Mountain is reputed to subject riders to 4.5 times the force of gravity for about six seconds.

The remaining 28 seconds would of course be spent in a free-fall, or zero gravity condition.

Would this become tedious for the riders?

Probably so. However, I believe that the far greater average speed and rough terrain capability would allow for rest periods that would more than compensate for the stress. And, imagine the views from 200 meters above the lunar surface! But could it really work?

I have little doubt that the hotrod described above could be built. At present, it exists purely in my imagination. I can picture the steps I would take in order to construct it, but the only way to prove the matter would be to actually build and test the MagRod Leaper.

There aren't many lunar slopes steeper than 45 degrees, and they have now been exhaustively mapped, and so I think that the MagRod Leaper would be able to follow a fairly straight course. To the terrain-scouting camera of my original description, I might add a ground-penetrating radar to ensure that we did not land on the thin roof of a lava tube and fall through.

Would you like to go for a MagRod ride with me?

In my imagination, I'm piloting that craft around the Omni magazine lunar race course, and you and I are enjoying the scenery while having some fascinating conversations. Can you dig it? Come on aboard!

What was the outcome of the Omni contest?

Here's a sneak preview of one of the ten finalists in the Omni contest: Sorry, but I'm not impressed.

This looks for all the world (or all the Moon?) like a pickup truck with a satellite dish on top. It may offer a more comfortable ride than my MagRod Leaper, but over the rough terrain of the race course, I can't imagine this maintaining an average speed of more than 25kph, can you?

In sad but now obvious retrospect, Society Expeditions (the prize company) went out of business, and Project Space Voyage never got off the ground. No tourists went into orbit in 1992. Nonetheless, there was an Omni contest winner.

Note: In order to tell my story, I've included excerpts from Omni under the legal doctrine of fair use, with full attribution to their source. 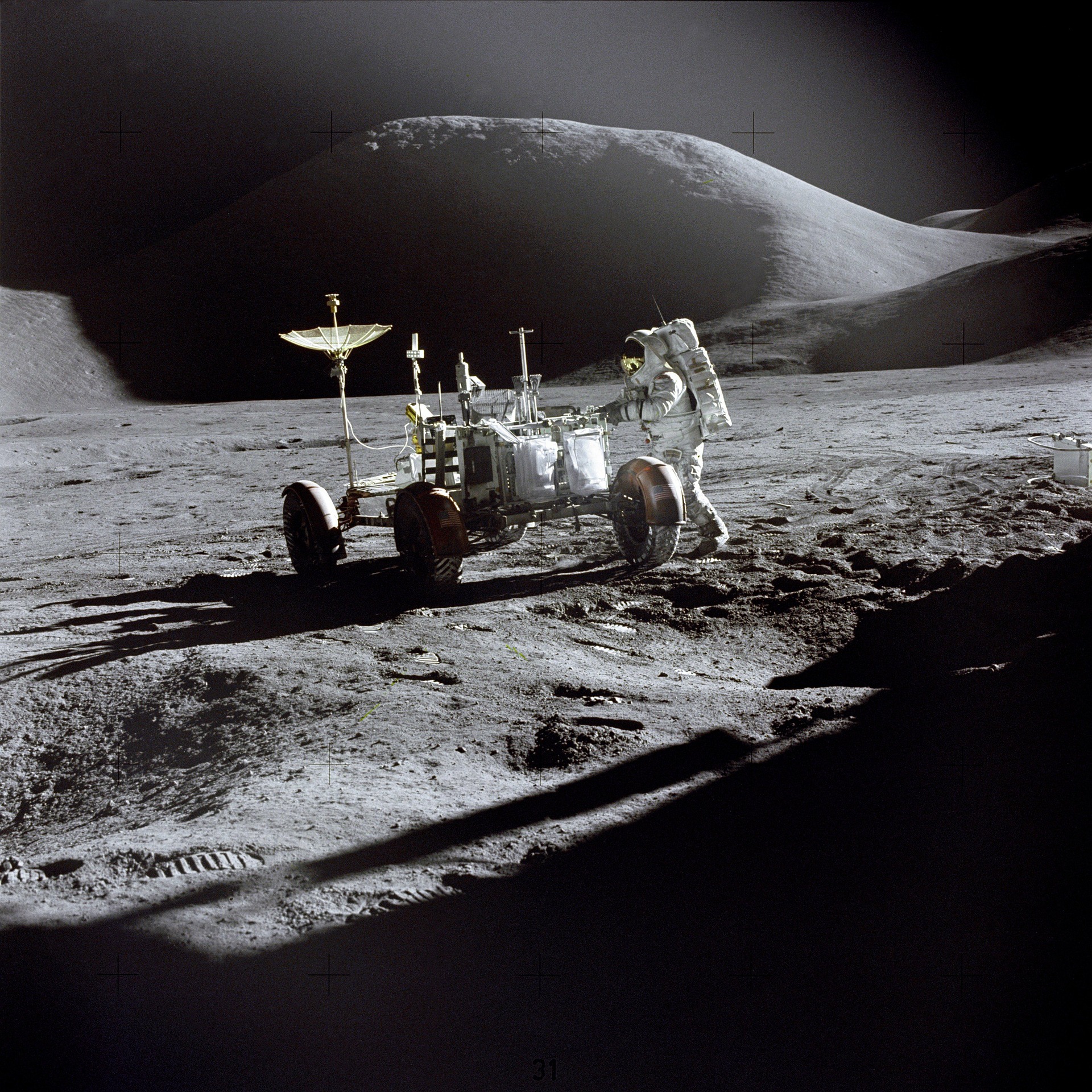 The Model-T of Lunar Rovers ~ Image courtesy of NASA-Imagery.

Articles In This Series

You may want to read this short story (LINKED HERE); it's a teaser leading up to this article. It provides a "sneak peak" at the Lunar Leaper described in this series of articles.

Important Note: My articles often contain hot links to supplemental information. While they aren't essential, you may find added value by following them. Most images also link to useful or related information or articles.

For much more of @creatr, click on the library image below:

not the site - hahahaha cuz that is goign amazing.
but our minds - we want to do everythign and we are so excited and everything is so m uch fun! hahahaha

Curiosity drove me to the comment section hmm ... I haven't heard about a car drive in the moon with the specifications Lunar Rover Vehicle with all due respect... Is this true?... I think I would make my researches too !... I'm quite naive though.

Woah! woah!!...your imagination is purely incredible at a time I was actually wondering if it was a imaginative creation.. At least it was alongside your beautiful description of the contest in just 200 words!..
Do you make 3D designs?

I came here through #dreemport!
Impressive article, I must applaud your creativity.

I'm so glad you've discovered my story courtesy of #dreemport. Thank you for reading, and for your very kind comments. Yes, I make some 3D designs, and the next article in this series has a much more complete collection of images that (I hope) will help you better understand my written concept.

You can of course read online about the original lunar rover as well as many other designs, but I haven't as yet found many similar to my design concept. However, just recently some interesting "jumping robot" research was published here on Hackaday, and if that interests you, be sure to follow the links from there to further information.

Also, almost all of my articles contain links to additional information that you should please follow to discover further background about the topics.

My new friend, I can't think of a kinder thing you could do for me than applaud my creativity, because it reflects on the fact that I consider that creativity to be a very kind gift from Jesus/God who made me and got me moving along a creative path... Thank you so much!

Oh well! I'm certainly checking up this list of things... now you make me curious to know more!.. Nice one!