Everyone getting their panties up in a bunch over this. I am sure Dan will flag the post himself when he is done working on whatever he is testing. Dan is one of the large stakeholders that cares about the platform and not abusing the reward pool.

The joys of social media. Make one mistake and there's a swarm ready to pounce and rub it in, as if everyone in that swarm forgot about the time they shit their pants because they thought it would just be a fart. But I'd say the reaction here is mellow this time around, so that's a breath of fresh air. Nowhere near as zany as the hiro incident from recent times.

I haven't shit my pants in a few days. So I am doing good.

Yeah. My accident free days are starting to accumulate as well. But I refuse to let my guard down. And it's so cool we get to carry a wipe around with us nowadays and wear it on our face when not in use.

Congrats man. It is a good feeling to be more confident about not dropping a load in your pants these days.

They should make a crypto that rewards us for this behavior.

I thought that was what doge was used for

I stopped paying attention so I wouldn't know. But if it is a shit coin, things are starting to make a whole lot more sense now after this important conversation.

I replied to this comment because I wanted to see where it got put in the nesting.
Seems comments only go 3 deep on not just this platform.
If you know of a place that does comment nesting 4 or more places, I'd be happy if you told me.

Edit, so it did what I thought, instead of nesting under the one I commented on, it went to the bottom.

I just use PeakD and whatever happens, happens.

Even the folks who may have come across harshly have a space in my heart. I don't look down on it, I just look at it. We've all had our moments of feeling low, or acting low. Those moments only paint a small portion of the entire picture.

Indeed bro, keep it up

I posted a test post via https://testnet.peakd.com/@theycallmedan/posts this link and it somehow posted on my main account. I self downvoted the post to zero. Not sure how that happened. Beautiful man ;)
I’m trying to convince Guru to become white colored, she is on the way ;) Actually I had some crazy gal try to steal my dog today.

She tried to hit me with a rock so I threw a rock back and whacked her in the ankle.

Police apparently appreciate tweakers getting what they deserve.

I can't believe she was trying to take my dog and anything else she could get a hold of.

Wow 😯
There are crazy people out there;)
Namaste 🙏
!BEER
!ENGAGE

Well that's the best part I'm trying to be a non-violent person because it is a choice.

I choose to be non-violent because I can be.

Huge difference than being nonviolent because you're no threat.

Same as you I practice non-violence ...
But I always think that someone will eat it just because of Guru...
Especially when I'm around nature and someone tells me to keep the dog on a leash...
Namaste :)
!BEER

Hey @ganjafarmer, here is a little bit of BEER from @iliyan90 for you. Enjoy it!

Hey @ganjafarmer, here is a little bit of BEER from @iliyan90 for you. Enjoy it!

Sorry Dan, had to remove some rewards on this one! Keep up the great work elsewhere though 🙂

And we have a winner!

There is a lake, I'm told, in Africa where the locals fish it buy creating a shadow that goes to the bottom.
The fish think this shadow is an impenetrable force.
They 'herd' the fish with this shadow to push them all to one side of the lake.
At some point, one fish darts through the shadow.
Then three.
Then the locals have to start over.

Congrats on being the first one through the 'impenetrable' shadow.

The guy I heard it from said that if folks could see the shadows controlling them for what they are we would have a much more pleasant world.

Oh that’s deep bro, I feel you there! I am trying still havint figured it out yet I still have too many mental blocks but I realise it’s a shadow but my body won’t make the move

The illusions persist by being easier to confront than the reality. Lol, I like it! Just hope I don't get speared on the other side of the shadow!

Only the ones too afraid to confront the reality get speared.
You'd think the fish would catch on.
The ones not speared would reproduce more, or something.
That story is from the 50's, I wonder if they still fish the lake that way.

Yeah man, you're right about that. Fear is the mind killer.

If it was a sustainable way of fishing, they might still be doing it. I like the metaphor in any case!

Lol you Justin Sun you!! Traitor

Are you just trying to fuck me or something?

Dan has spent so much time, effort, and money on the blockchain, I am pretty he will not destroy it just for a single post. We all make mistake just as myself did a while ago, I know people can still remember me. Your good to go, buddy, please neglect all the negativity <3

For historical purposes, I'm leaving here the WALL OF SHAME before they notice and remove upvotes. 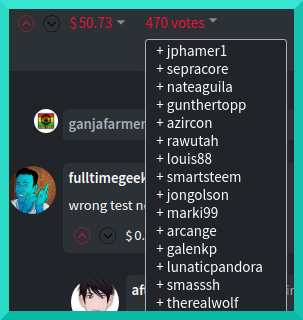 Why shame? It's autovote man! That's the way hive works! You are not new or anything :)

True, but you should at least check the tags before upvoting. My bot doesn't upvote anything with the tag "test" or "testing".

“Check tags”? Dude! It’s autovote. I don’t check anything :) also not planning on checking in future.

The amount Dan has put into this blockchain and all he has done for Hive, I'll proudly be on the wall of shame for an auto vote my account gave him.

Some people have better things to do.

My flag button was broken lol ... it seems to be working now though 👍

What is it? I don't understand 😕

LMFAO 50$ test? Dang Dan! Not half bad for 2 seconds of work ahahaha.

This is based solely on the reward:

Hell'uva test you got there!

Software testing must be payed. 🤣 He should put all us shitposters into a raffle and send the rewards to one of us :P

Or, y'know, the DHF or something actually reasonable.

550 posts that would have gotten a dime now won't.
It is the game we are playing.

How many newbs got their rewards pushed below the dust level is my question.
We got plenty of folks at the top.
Maybe 'we' should look at voting more posts on the bottom?

I gave it a .002 vote via my bot, but I got to build a read list somehow.
With my manual account I don't vote many posts with more than 2htu on them, as a matter of policy.
If this policy was more widely adopted my guess is that more folks would stick around.

I've been making a conscious effort even with my low-ass stake to seek out and vote for new users creating decent content. Figure if it wasn't for folks doing that for me when I was super low, I'd have left... only natural to pay it forward.

I might not agree with everyone on the chain, but we're all part of Hive and I'd like to see us all succeed.

Yes, the first one that successfully herds these cats will live on as the lion king, for sure.
Ned could've but he lacked perseverance in the face of mounting odds.
If he had taken the side of the newbs against the greed at that top things might have turned out different.
Good on him for taking his millions and letting the rest of us determine what this will be.

I remember getting 21 posts in a row that rounded down because a certain whale thought that would break my spirit, now I'm still publicly here, and he is not.
He was giving me .015 votes so it would show as gonna pay, then not.
He has, presumably, taken his millions and left, too.

That kind of toxic behavior from someone who's social status aught to require a more community-oriented mindset is disgraceful. We are doing much better now that many formerly 'popular' folks have cashed in their chips, stopped tipping their friends, and left the table.

I don't think anybody expected us to still be here 5 years later, but here we are looking forward to the next 5.

Kind of funny all the comments and the hype. When I tried to test my test also got placed on my blog. At least Dan has shown to me that with this test he is seriously serious about Hive. He has at least tried to test the new and upcoming hard fork. The errors and mis-directions of testing post are and will lead to improved testing system in the future. When testing on peakd I learned that I need to change the node on hive keychain to the test rpc, I did not even know there was a test rpc to hive key chain it simply was not mentioned.

When I ran my test on hive.blog the first try did not go well, because I was logged in via hive keychain, and I should not have been, I should have done a manual login, so second test worked.

If more people tried to help with testing perhaps we would not have so many small errors after each hard fork. It was hard to try and help test as a user on Steem, it just was not appreciated by the steemit team. Hive dev team appreciates just plain users trying to help test.

He tried to help, the dev teams learned, I learned, he learned. Yet how many people have said thank you to him for trying to help test the system to help improve the system. No...no thanks for trying to improve, just recriminations about a bunch of auto vote trails voting on a post. I think he should have waited until day 6 to totally zero the votes out,