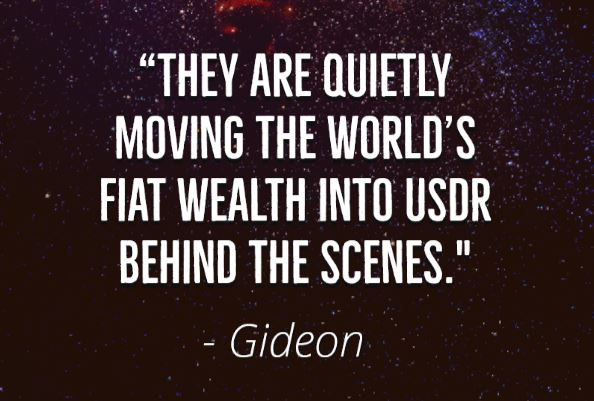 First off, I want to let everyone know that Michael and I have gotten a lot
of emails. I wanted to let everyone know, you’re not being ignored. We’re
planning to respond to everyone personally this upcoming week. We’ve
read them all by now and we appreciate all of your support.

We’ve had a lot of questions about USDR, so I wanted to focus my
conversations with Gideon the past day on this topic and the economy.

Bill: When we get into USDR and how they’re doing this, I feel like this
conversation could go on forever. Let’s just start with some basics. What is
USDR? What does it stand for?

Gideon: “It’s the new one world digital currency. It isn’t backed by gold. As far
as we can tell, it’s more going to be backed by the existing fiat wealth being
poured into it as we speak.”

Gideon: “That’s in the ballpark of what we think it is. We’re not certain on the
name, it may be changed. People need to realize almost all fiat transactions
go through the BIS, so that is the head of the beast. The IMF is secondary to
the BIS. I hope that’s understood.”

Bill: Ok. As for the name, it’s probably not that important. You said they
had seen SDR and XDR in the documentation. Does XDR refer to the
crypto coin of the same name?

Gideon: “No. No existing crypto is being utilized here whatsoever.”

Bill: Ok. We are seeing all this talk about the BRICS currencies. What’s real?

They usually like a war going on, too, at any given time. Once Afghanistan
wound-down, so China can move in there and take over, they fired things up
in Ukraine. So there’s always, always a war, Bill.

The last thing they want is anyone knowing what’s really going on. So their
Sovereign agents pump out a ton of stories about ‘this or that’ or the ‘next big
thing’ in crypto. Everything in the mainstream media is total lies, too.”

Bill: What about China and Russia and this bi-polar world they are
making?

Gideon: “It’s nonsense and misdirection. It’s sort of this Cold War rehash. It’s
not just meant for us, Bill, things like that are meant for international bankers
and business people who will not become Sovereigns. It’s meant to deceive
them.”

Bill: Ah, ok, that makes sense. There’s only going to be 8 Million
Sovereigns, so a ton of rich and powerful people will be left out in the
cold.

Gideon: “Their assets will be seized and they will become Common class.”

Bill: They’re not expecting riots from these people?

Gideon: “No. It’s not in their nature to do that. There will be a lot of
grumbling, discontent, fights with the wife in their mansions they lost, but not
much will come of it. And there will be suicides, a lot of them.”

Bill: Will they get to stay and live in their mansions?

Gideon: “At first. They’ll pay some kind of base rent, $500 a month. They’ll be
on a tight budget, working with their $1000 per month. A husband and wife,
it’s $2000. It’s enough to live on, but their lifestyles will be drastically pulled
back.”

Bill: We’ll get back to USDR, but what happens to the luxury industry, if
these people are pulled out of it?

Gideon: “You need to get your brain reworked to see the world differently.
This is Communism. The top of the top in Communist nations live very, very
well. The luxuries don’t go away, but they are concentrated. The luxury
industries will still exist, but they will be downsized, to serve this small, elite
class.

All the top CEOs of the biggest companies are Sovereigns and they’re in on this
and agreed to it, even if it means a restructuring of their business models.”

Bill: People are asking me where we can find the USDR blockchain?

Gideon: “It’s not public. It’s classified. That kind of thing won’t be anything
even some of the best hackers can find.”

Bill: But they’re saying to me, “Let’s hire some hackers.“

Gideon: “That’s like saying, ‘Let’s hack the CIA.’ Forget it. If it could be done, it
would be done.”

Bill: Is this why the crypto in-flows go to dead wallets?

Gideon: “Bill you might want to take a step back and explain that if this is
going into your blog.”

Bill: Right. When the in-flows come in, you send crypto to an address and
it just sits there. There’s nothing we can glean from that. I did that, and we
looked at the address but we can’t learn anything from it.

Gideon: “No, you can’t. It’s very smart how they are doing this. When the
Sovereigns are sending in crypto to get USDR, the crypto goes to a newly
generated address and there’s no way to find out who created it, where it was
created, nothing.”

Bill: Then they take what was put in, and issue USDR at the 1:43 ratio
within the CSRQ software. Is that right?

Gideon: “Mostly right. It’s not really CSRQ, it’s another module that handles
the financial side of this, but that’s about right. There’s no way for an outside
person to go look at the USDR. It’s a closed system and classified. Only our
whistle blowers can access it and see what’s going on.”

Bill: So when someone sends in crypto, it automatically generates USDR in
the Sovereign’s account?

Bill: It’s not much different from depositing into Coinbase, then, right?

Gideon: “Conceptually, yes, it’s the same thing, except Coinbase’s code and
methods are more public, of course. Easier to see or watch. With this, it’s
behind a closed, sealed system. Eventually, it will go public, after the Reset.”

Bill: After the Reset, will hackers be able to mess with it?

Gideon: “Not anymore than they can mess with DoD, NSA or CIA firewalled,
top secret systems now.”

Gideon: “They are, it’s the sales blitz we talked about last time. They know the
fiat will be worth nothing soon, so they want to move it into USDR. They aren’t
like the other super-rich Sovereigns, either. We’re talking about medium-level
influencers in the alternative media who’ve recently been flipped. Once they
learn what’s going to happen, they go nuts trying to get all their fiat into USDR.
Meanwhile, the super-wealthy are just slow and steady, moving it into USDR
over the past eight months.”

Bill: Interesting. And this is draining the current economy of liquidity?
What’s the effect its having?

Gideon: “We were talking about Blackrock, how they were saying they lost
$1.7 Trillion the past six months. That’s laughable, but really confirms what’s
going on.”

Bill: It does, it backs up what you’ve been saying. I saw another story
about some trader losing $50 million. I realize the economy’s not doing
well, but some of these losses seem overblown. And of course with China,
you see a total unwinding going on there.

Gideon: “You will see more of this, and they will lie about why the money was
lost! They’ll keep making excuses why money is vanishing. They don’t want
anyone connecting the dots to USDR. They’re all getting wildly rich. After the
Reset, the wealth will concentrate like nothing seen in history.”

Gideon: “We’re not sure. It seems to have to do with how they will restructure
the economy. The buying power of the monthly stipend everyone will get will
be stronger than the buying power of, say, the Euro and US Dollar now.
Inflation will be eliminated. Goods and services will be price-controlled. The
wealth of the top Sovereigns will be astronomical, into the the many Trillions.
Anyone who is Sovereign is poised to become wildly rich.

There also seems to be a factor whereby they expect the USDR to be very
stable in value. I don’t think going forward they are going to become much
more rich, they are just going to stay rich. Concepts like bonds, interest rates,
that may go away. We think they are restructuring everything in terms of the
economy and how money is valued. It will be more stable. But the average
person won’t benefit much, they will have zero chance of gaining wealth. They
will just have a baseline of stability.”

Bill: For many who are more poor, this is probably a boost for them.

Gideon: “It is, but they have to get vaccinated, which wipes out any benefit for
the poor.”

Bill: It’s horrible. Whatever good the cabal does, they erase that good with
something evil.

Gideon: “I don’t think they are capable of good.”

Bill: I know you have to go and we can’t talk long today. I’m glad we
covered all of this, though. I still have a lot of questions from people we
need to cover in the future. Is there anything you want to say before we
go?

Gideon: “We were talking about how many people we’ve reached. It’s around
1 Million who have seen this information by now. That’s really good, but we
can’t slow down. Keep pushing people to read, to learn and then engage.”

Bill: I’ll do my best. It’s overwhelming. I’ve been spent physically and
mentally the past week. We talked about this, but, I guess I want people to
know. You think I’m being electronically attacked?

Gideon: “The cabal loves to electronically gang-stalk people and ruin their
lives, it happens all the time. But they don’t know where you are, Bill, they
can’t find you. So I’m not sure. It could just be the information is bringing you
down. Be sure to rest well and take time off.”

Bill: I’m trying to. What if they do find me?

Gideon: “Well, you know what the outcome is. You knew that from the start.”

Gideon: “They don’t know where you are and they won’t figure it out.“

Bill: Good. We laid enough traps to keep them busy, I think.

Gideon: “We did. This is what I did for most of my career. I know what I’m
doing.“

Bill: Ok, we’ll talk soon. We need to get to the drones next.

Gideon: “Yes, because people are in total denial about it. Total denial. The
drones and robotics they have developed are a huge threat to the world, and
no one is discussing it. No one. Because they’re all Sovereigns.”

Bill: God help us, we are up against so much.

Gideon: “We are. Don’t give up. Each and every day, we will whittle away at
their lies and we will hopefully grow in numbers and support.”