COVID19 - The Greatest Hoax in History 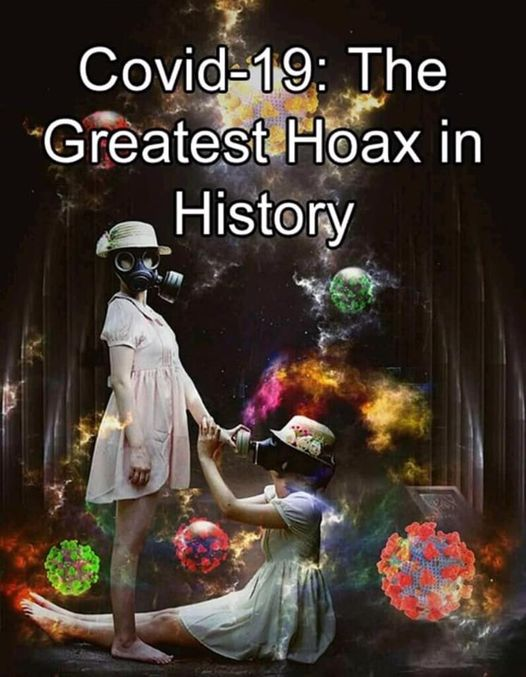 2020 was a horror show from start to finish because it was full to the brim with billions of lies, magnified through billions of brains by relentless psychological warfare brought to us by devices we paid for & trusted.

We should have learned not to trust anyone who benefits financially from us believing in an invisible enemy. But the vast majority of us fell for the deception, hook, line & sinker.

We should have observed the co-ordinated onslaught of voices quoting buzz phrases & magnifying spine-chilling fear until every soul on earth was resonating with the pervasive mind worm of COVID19. We should have realised that this media war was under a central iron-fisted control & we were its intended victims.

We should have recognised that tell-lie-visions, radios, internet & gossip were being utilised to force billions of people to think about the same terror at the same time & were, therefore, permitting their psyche to be hijacked into a mass hypnosis leading to panic on a scale never seen before.

We should have known that this was entirely deliberate & had a purpose.

What was the purpose & who would benefit? 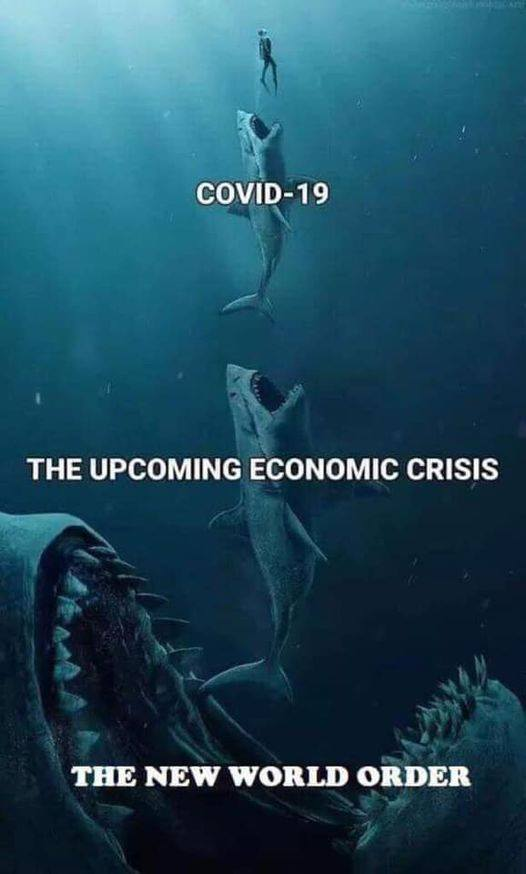 The World Economic Forum, led by Klaus Schwab (ostensibly) is a shadowy Non Governmental Organisation based in Switzerland, the banking home of the world's aristocracy. It has teamed up with the United Nations, the World Bank & the International Monetary Fund to promote the 4th Industrial Revolution, Technocracy & what it likes to call the Great Reset.

It more than foresaw an economic crisis. It actively sought an opportunity to create one but, rather than shoulder the blame for destroying the global economy, it needed a crisis which would generate a co-ordinated knee-jerk response from puppet governments & spiral national debts to an astronomical & eye-watering level.

Governments worldwide were issued with instructions to implement lockdowns that would be guaranteed to cripple all but the biggest corporations. Millions of small businesses were deemed "non-essential" & forced to cease trading. Governments were encouraged to stress to their citizens that this was "for the greater good" & they were offered massive loans to help them sweeten the blow with furlough for the select few.

There were times when the world seemed to hold its collective breath, terrified to breathe life's most essential gas. Everyone was convinced that the very atmosphere was harbouring an invisible & lethal pathogen, even though no scientist could produce a sample of this miniscule weapon of mass destruction.

While we cowered in our homes, locked down like prisoners, essential construction work was rolling out globally.

Were they building microbe resistant hospitals & homes?
No.
They were building the essential infrastructure for their Internet of Things, their surveillance networks & their vision of a New World Totalitarian Order.
They were building a global prison which was as invisible as the enemy they had imaginatively invented & is intended to become far more deadly than any microbe could ever be.

They have persuaded the gullible to believe that faster download speeds are some sort of essential development, they have squashed all opposition & they have dismissed multitudes of highly educated sceptical voices by denying them an audience on their media networks.
They have employed armies of dismissive & argumentative collaborators to deceive the public & sneer at anyone who questions the narrative.
They have engaged their most obedient servants in supporting & justifying their extreme deception which depends on an interlocking pseudo-scientific body of international mind controllers in every university & school in the world.

This level of mind control has turned science into a religion.
A religion which must be obeyed & never challenged "for the greater good".

Do you think humanity is going to benefit in any way beyond faster download speeds in hand-held devices?

The pathogen is not microbial.
That truly is the greatest hoax in history.

The pathogen is technological rather than biological.
The pathogen is non-ionising electro-magnetic radiation & it is killing ALL LIFE in a silent but deadly progression.

We are told that a mysterious "virus" is infecting humanity but nature itself is voicelessly diminishing all around us.
When did you last have to clean dead insects from the windshield & lights of your vehicle? Have you noticed the slow decline & death of trees? Or are you so addicted to your handheld screen that you never thought about other life forms, upon which our food production depends symbiotically? 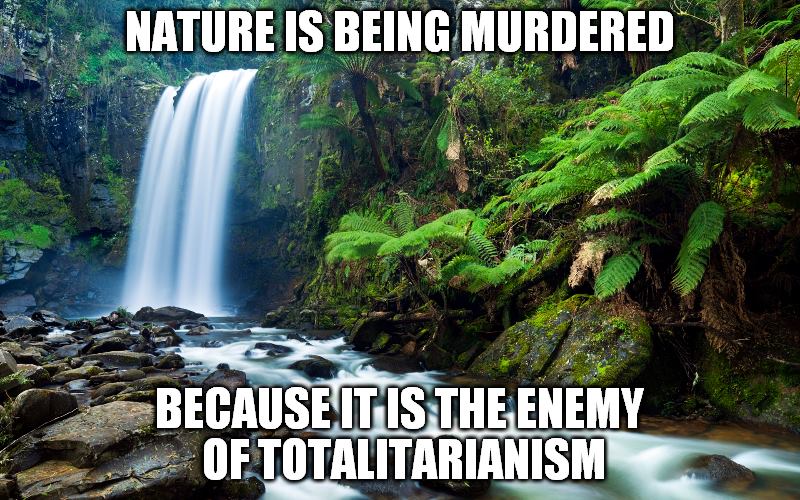 Only the most obsessed & hateful entities could seek to destroy nature itself.

There is a conspiracy of phenomenally wealthy families who count their possessions in trillions of dollars or pounds.
Jeff Bezos, Mark Zuckerberg, Bill Gates & Elon Musk are listed by international magazines as the "richest men in the world" along with several hundred more who have become billionaires by co-operating with the aristocratic Black Nobility.
These are the gofers.
The tea boys.
None of them could have achieved such corporate success without the express permission & support of the Black Nobility families which OWN all the central banks in the world.
Rothschild, Rockefeller, Morgan, Barclays, Lloyds, Goldman Sachs et al are all minor obedient players in comparison with the huge wealth behind the central banking network in Black Nobility hands.

I dare say that the people who labour all their working lives in the globalist corporations have some sort of collective dream in which becoming a member of the highest echelons of power figures prominently. That is how deceived they are.
They are dispensable fools who are subjected to the cold indifference of the haughty bloodlines who believe in nothing but their own "divine right to rule". 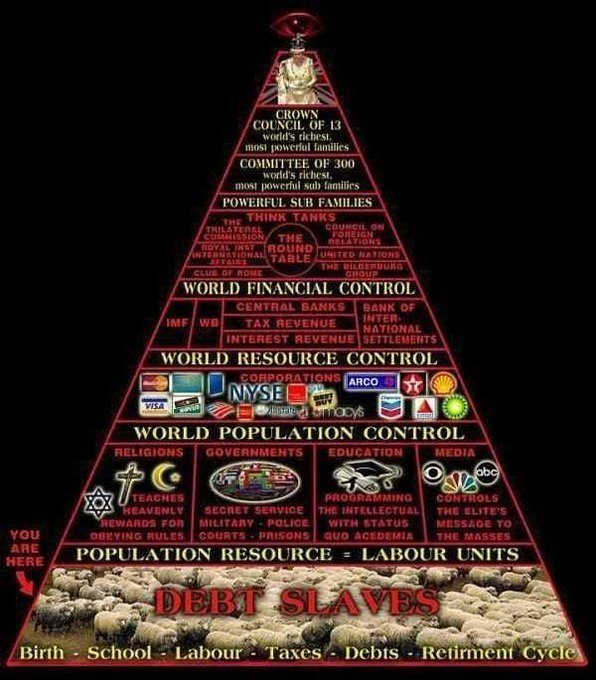 They tell us, via their minion Klaus Schwab & his book, the Great Reset, that they have designed a more equitable system which will recognise stakeholders & meet the United Nations' Sustainable Development Goals of Agenda 2030. 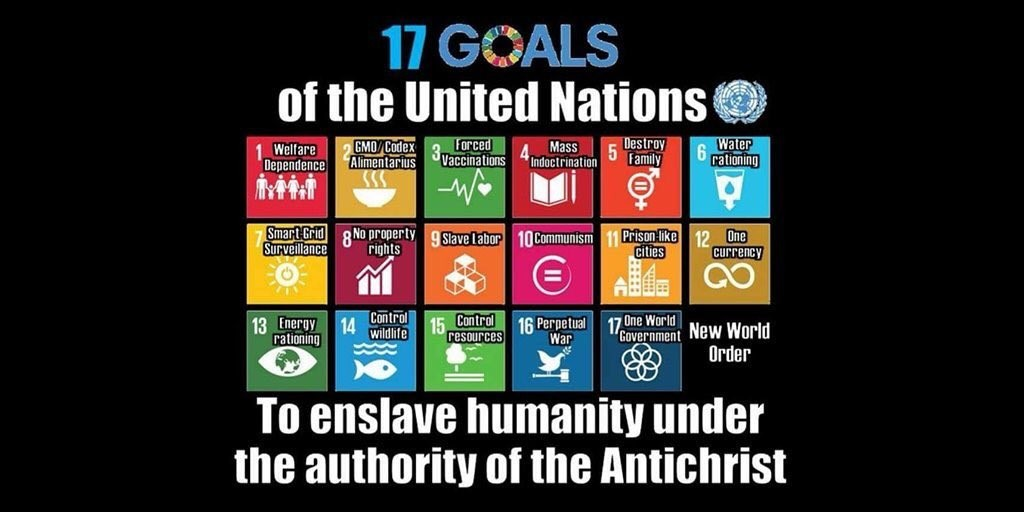 They don't mention that the only equitability will be between themselves. The rest of us are surplus to requirements.

The speed with which the global economy has been destroyed is quite breathtaking. The supply chains are grinding to a halt & the lockdowns are showing no sign of ending.

As the technology & satellites saturate the atmosphere with inescapable electro-magnetic radiation more & more people will become very sick. There will be no recovery from "long Covid" which is nothing to do with a "virus" but is the result of life's delicate electrical frequencies being disrupted & scrambled to death.

There is no gentle way to say this.

We are being wiped out & so is all life.

The Black Nobility have plans which do not include us.

Their Great Reset is eugenics, genocide & redesign of life itself.

These psychopaths scorn morality & ethics, they are nihilists & atheists. They will listen to no logic or reason.
They are arch criminals & come from families which have nurtured superiority for 8,000 years according to many researchers such as John Coleman & Dean Henderson.
There is only one way to deal with them.
They must be eliminated before they eliminate humanity & replace it with a robotic/biological monstrosity.

As Dean Henderson states, writing in his recent book "Nephilim Crown 5G Apocalypse" -
"The key to human survival in this epoch will be to stay wild..... wild means pure & untainted, the true meaning of alpha. It means to be leery & suspicious of civilisation with your aura shield up & your pineal gland bullshit detector on full power. It means getting in tune with your natural instinct & with nature itself, which has always provided what mankind needed to survive & always will. The Great Spirit created plants, animals & humans as perfect beings which were meant to exist in symbiotic harmony. This is the Good Road which will save us."

If you like my work & want to see more, offer advice & info or ask questions you can find me on Facebook at:
https://www.facebook.com/franceselaineleader/
Or by email:
[email protected]