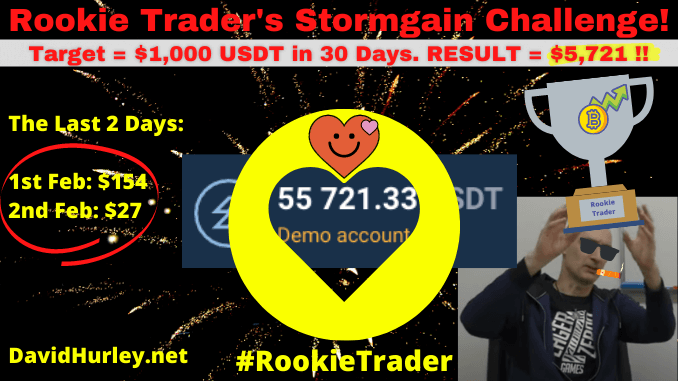 Okay, folks, the results are in!

I started this 30-day crypto-futures demo-trading challenge back in the New Year as a kind of disciplinary action after losing around $165 of crypto on the Stormgain trading platform.

Back in December and early January, my small wins were wiped out by bigger losses which ate into my stash of crypto until the cupboard was bare! With only $26 worth of crypto left, I went "all in" on a trade that went to zero!

At that point I gave myself a serious talking to. "Look, you blithering imbecile," I said to myself, "stop fooling around. Either take it seriously and do what you need to do to learn how to trade, or don't do it at all. If other people can do this, so can you!"

It was at that moment when I decided (1) to force myself to practice trading on the demo account for 30 days and (2) to make it public, no matter what the result was, by blogging about it on CTPTalk and DavidHurley.net and sharing those posts on social media.

Back in early January I felt I'd be more than happy to emerge from the challenge having made a $1,000 profit on the $50,000 "demo trading" account that every #Stormgain account holder is given.

And what a ride it's been! It feels as if I've packed much more than 30 days' experience into the challenge!

I won't talk about all that right now. I intend to discuss what I've learnt in more depth another time.

I would never have believed that to be a possible outcome back in the New Year!

On February 1st I ended up doing okay although my early trades were rather slow and I decided to cash out quickly. As usual when trading in Etherium and Bitcoin at this time, I'm not going to fight what I believe to be the underlying bull market, so the trades were all long, and all $500 with 30x leverage, so the results were modest, just $8 on the Etherium position and $43 on the Bitcoin position.

Later that day I opened a new trade in Bitcoin which did better, but either I closed it out early or lowered the Take Profit (I forget which) for a $103 profit, and a total for the day of $154.

On the last day of the challenge, February 2nd, I took out just one trade and closed it out as soon as I noticed it was in profit. Again, it was a $500 long trade in Bitcoin with 30x leverage, but I was happy to close it out on $27 and conclude the last day in the black!

Of course, it would have been better to have waited for the fast rise in Bitcoin that kicked in later in the day!

On the other hand, I have already moved onto my next project, which is to bring out the 4th edition of my co-authored book, "A Thousand A Month." With no open trades, I was able to stay focused on that project for most of the day! 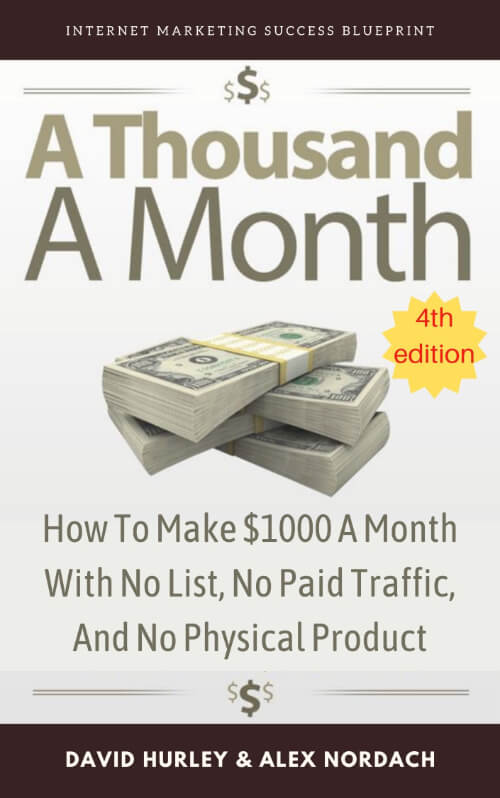 Disclaimer: I am not a financial advisor and this is certainly not financial advice. Simply the musings of a rookie trader playing with pretend money on a demo trading account… I actually have 100 dollars sitting on E Toro that I haven't done anything with. I am going to follow your example and use the demo account to learn and understand what I am doing before I do anything with the real money. Thanks for sharing your experience.

Thanks, Lisa! That 30-day challenge was really useful. I learnt a lot - it feels like much more than a month. Of course, it helps to be starting in a bull market for crypto, so maybe I had an easy ride!

Blogging about it forced me to take it seriously and helped me with "content creation." It was also a big incentive for me to do the research and be prepared to be open about my mistakes, and interesting to see where my experiences and "common knowledge" tended to diverge.

If you do start demo-trading, I'd be interested to follow your progress - demo trading gives you a lot to blog about!

You're welcome, David! Good hint about using demo-trading for content creation ideas. Thank you for that! Always nice to have content ideas! Have a great day! It will really be starting from scratch for me too. I have very little if any knowledge around trading stocks. Have a great day and week ahead!😀
!ENGAGE 25