Chelsea Cruise Past Real Madrid Into the Champion's League Final 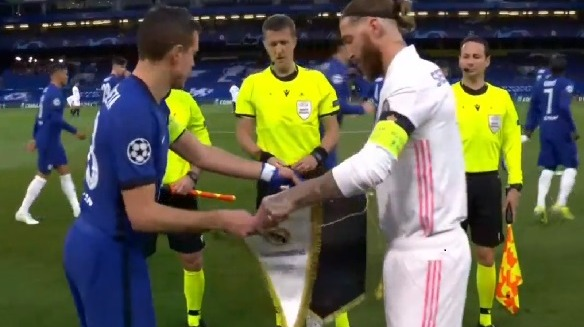 Chelsea put in a dominant performance over Real Madrid on Wednesday night in London, trouncing the European powerhouse 2-0, for a total aggregate score of 3-1 in Chelsea's favour.

The scoreline was exceptionally kind to Madrid, however, as Chelsea squandered at least half a dozen golden scoring opportunities, most coming in the second half as Madrid pushed forward as effectively as a wet noodle. Timo Werner thought he'd opened the scoring early on, but was miles offside on the play, though he'd take another chance given to him just a few minutes later when N'Golo Kante played Kai Havertz in, who struck the crossbar after chipping Madrid keeper Courtois, only for the ball to land softly on Werner's head a foot off the goal line. Chelsea's first goal changed little for them, as Madrid still needed to score one goal to give themselves a chance at progressing.

Only a few minutes into the second half, Havertz hit the bar with a header, then Mason Mount, Kante, and Havertz were each in turn played into 1v1 situations with the Madrid keeper, but none could find the finish until Christian Pulisic was substituted on. The American needed a few chances himself to find the final bit of quality, but finally did so n the 84th minute when he ran deep into the box then squared it for Mount to finish and send Chelsea to the final.

Madrid's only decent chances came in a short flurry in the middle of the first half, when a long shot from Benzema needed Mendy to push it outside the post, then Benzema broke free in the Chelsea box to receive a cross, but couldn't place the header past Mendy again. In the second half, Madrid barley mustered an attack, and were being constantly cut to shreds by Chelsea counter-attacks, with Courtois as the only Madrid player that did not dramatically disappoint.

Chelsea will play Manchester City in Istanbul for the Champion's League Final after their domestic rivals handily beat Paris SG yesterday with two goals by Riyad Mahrez. An early preview of the CL Final clash will be played in the Premier League this upcoming weekend, just a short time after Chelsea beat Man City 1-0 in the FA Cup Semi-Final. Manchester City have already won the league, but face a serious challenge from Chelsea for the greatest prize in club football.

Congratulations @johnvonbob! You have completed the following achievement on the Hive blockchain and have been rewarded with new badge(s) :