We are now 6 weeks into the new season and the league will get underway again this weekend after the international break. Time to have a look at how teams have been performing so far as I'm trying to find patterns that potentially could be profitable... 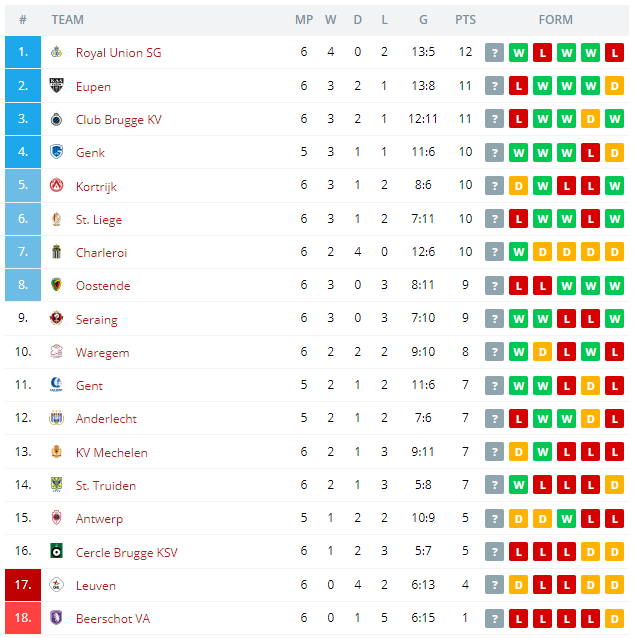 I do keep my own stats mostly putting importance on the Asian Handicaps/Totals and how teams are beating those as a way to find an edge. It's not because a team is on top or the bottom that they are a bad team to bet on. These are the rankings so far after 6 weeks.

1. Overall ROI on all closing lines
These stats give a general view on which have been the most underrated teams so far on the market (or the ones that got most lucky)

These numbers need to be combined with what has been shown on the pitch and the situation teams have had to deal with so far. There will be a lot of regression to the mean and how I'm reading this is that you need to be cautious betting on Club Brugge at a bigger handicap as they are near the top in the standings while they are getting crushed against the asian handicap. Eupen so far has been the most underrated team by the market along with union which makes sense as they are smaller teams that are at the top of the table. Kortrijk on the other hand being in 5th position only slightly being profitable might be a team to oppose while Zulte who are 10th but have a +19% ROI looks undervalued.

The main difference between these stats and the overall goal stats is that it eliminates outliners and also adjusts the ranking based on the general price you pay. Kortrijk, Cercle Brugge & Standard seem to be the teams that have put the most focus on the defense succeeding in their approach.

Traditionally, there are more goals in the 2nd half but some teams tend to have a strong 1H/2H trend which can be used for Half-Time bets or Live Betting. Only 2 teams so far had more goals in their first half on average which are Anderlecht and Cercle Brugge.

It's still very early for these stats but some teams tend to have wildly different performances home versus away against the Asian handicap while the odds are much more set on the overall results. This can create a nice gap to take advantage of. Zulte-Waregem shows a similar pattern to last season so far.

That's it for now, I will be back tomorrow with a preview of the first match of the season and will for sure come back to this post checking some of these stats while handicapping all of the matches.
#news #statistics #football #palnet #neoxian #ctp #proofofbrain #gambling #betting #sports #sportstalk
last year in Sports Talk Social by costanza (74)
$5.39
107 votes
Reply 0
Sort: