I jump to glory. Yulimar Rojas

How about Sports Talk Social friends 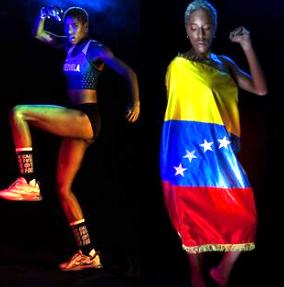 The Venezuelan athlete Yulimar Rojas was born destined to jump, because her initial passion in the world of sports was the specialty volleyball that she played as an amateur with relative success for several years in the city of Puerto La Cruz, a coastal town located in the eastern Anzoátegui state. from Venezuela, after moving from Caracas, the capital of that country, where he was born on October 21, 1995. Since she was little, Yulimar was enthusiastic about practicing volleyball like many young women did due to the good performance of the Venezuelan women's volleyball team in the 2008 Beijing Olympic Games, so she decided to approach her local sports center with the purpose of starting formally volleyball hoping one day to represent Venezuela in an Olympiad with the women's volleyball team. After attending repeatedly, there was no volleyball coach available but, on the contrary, the athletics coaches, upon seeing her, invited her to try her luck in the jumping specialties, an option that Yulimar fortunately accepted for Venezuela. Long strides 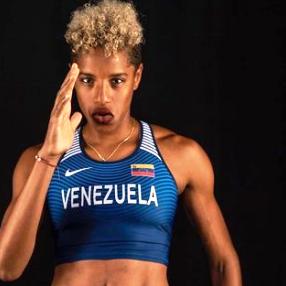 Yulimar Rojas' first important podium came when he was only 15 years old and training for a very short time, achieving 1.70 meters in the high jump test that gave him the first gold of his career at the XVII National Youth Games in Venezuela. played in the city of Barquisimeto. In 2011 he received his first international medal by winning the high jump event with 1.78 meters in the South American Junior Championship and a year later in other national games he won the 100 meters with hurdles, stopping the timers in 14.81 seconds.

Also in 2015 he achieved the Gold medal in Triple Jump in the South American Athletics.

While in the Rio Brazil 2016 Olympic Games, she won the silver medal in Triple Jump with a mark of 14.98 meters when she fell against the Colombian Caterine Ibargüen, two-time world champion and current Olympic champion in that event.
All these achievements as referred to in his biography available on the website. wikipedia

Precisely the Rio 2016 Olympic Games, was the beginning of a great rivalry with the Colombian Ibargüen, which the Venezuelan came quickly to beat her the following year in the world outdoor championship with a jump of 14.91 meters.

Later he reached the gold medal in the triple jump of the Pan American Games in Lima 2019, with a jump of 15.11 meters and set the second best record of all time in Andújar Spain with a spectacular jump of 15.41 meters, to close 2019 as World Champion for the fourth time in the Triple Jump specialty at the World Championships held in Doha.

The Messi of women's athletics. 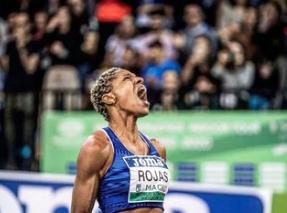 Yulimar Rojas, who is also a franchise partner of the Argentine soccer player Leonel Messi and with the respect that both deserve, can be considered peers in both sports specialties, has received in addition to the medals won multiple international awards and to close 2020 she is nominated for Athlete of the Year 2020 for the World Athletics Awards 2020, whose voting culminated on December 15 and the announcement of the winner will be made on December 5.