dCity as a game is still very much alive. Recently, in exchange for different kinds of work, I got three friends to play. You can watch their cities grow like I do, they are @thecrazygm, @lazy8 and @arangoaqet.

I think now, in this nice bear market moment, is a great time to start playing dcity. To putting in a few hundred dollars and playing for a couple of years - see what happens. The game continues to be developed, check out the most recent news about the nature zone combine here. Experimenting on citizens is an upcoming mechanic being revealed in the SimMillionaires Club recently. Super soldiers? Yes please!

But before we get ahead of ourselves, how do we 'start' playing dCity?

For me the key has always been the citizen mining strategy. Its really the only effective way to generate passive income when you are starting out to start making changes to your city, as students and young citizens both sell for around 1000 sim due to their tax rebate.

This means the key statistic to setting up new cities is popularity - the more the better until a certain point (~5000).

Here's a small model with 1220 popularity: The market costs for this are just 80 hive, or less than 40 dollars. From here you can start adding art galleries: Credit to @thecrazygm for the above, he took the standard model I gave him (park 180, farm 170, art 61, law 1) and began to PLAY, he's been playing for about a month. Its a game after all. Its pretty chill, you can leave it alone for a long while and then come back and play for an hour.

It has lots of nooks and crannies to discover. Lots of things to figure out. One could attempt to measure the profitability ROI of every click in a game like this; or you could just play it. 2500 Popularity seems like the sweet spot to get started in, and that's if we don't see any more war. It all depends on how much money you want to put in - here is @lazy8 who got about $350 in two payments from me in dCity cards: At this level there exists the possibility to earn HIVE ranking rewards. 0.4 HIVE per day (146 hive per year or ~20% apr) might not sound like a lot with HIVE at 45 cents, but it does give some future upside exposure to HIVE for these players, which some of them don't otherwise have.

Remember, we are in a bear market - this is the real time to do onboarding! I am using dCity to onboard players to the world of defi, nft gaming, blockchains, tokens and subtokens, and wallet accounts. It is a fun, gamified education about markets, relative values, mining and staking (LP). In other words, its the perfect thing to get new people involved.

Holding SIM and being in the LP are really important ways of being involved in the SIM economy, and non-players can choose these ways to participate. But playing dcity, for me, is choosing what to do with the 1000 sim you get from each student/young citizen. Its a game about positional reinvestment - within the game and within the wider world.

The model of dCity is that by continuously upgrading and adding on to the game, the players who adapt the fastest will get the biggest results. Top player @d-pend has not yet combined his nature zones, and has thus fallen behind in the INCOME ranking race. The drive for nature zones has lead to pushing up the price of parks, making them less viable as a backbone card of starter cities. The farm card still outshines in my eyes as a nice backbone card to gain both population (at the levels of popularity we are talking about 2500+) and income, with a bit of popularity as well. INCOME can be sacrificed for popularity by not having a GMO tech card as well, giving advanced flexibility with the farm card. This is a great card to continue to build up your population base and work toward being able to support late game cards like Military Bases, Networks, Temples, Industrial Zones, Farm Corporations and Drone Factories.

Almost every edition card has some level of popularity (although some are negative), so its up to our creativity as players to build these starter cities, something I have enjoyed doing. But I can't necessarily do it for everyone, and even if I did, in order to keep playing, some amount of card level analysis is needed from each player (learning to play the game): I would love to see interested players from the Splinterlands realm reach out to me, let me help you or your friend get started and invest just the right amount for you to make it fun. Learn and play, expand your crypto horizons. Maybe after 3 years it turns out you never made all your money back. Or maybe somewhere in that time frame we enter a huge bull market and everything changes by an order of magnitude. Only time will tell, but I think its an asymetric risk

My goal is to see 100 new players with starter cities!

Nice one, I am still trying to grow my city and get some of those citizens mined. I also put a buy order in the market to double my SIM holdings.. gotta love a bear market.

I still have a few of those 500 popularity starter cities that you were running before the changes.

Do you recommend trying to combine them to run less cities with 1000+ popularity instead?

Yes! The 500 popularity starter city is out of date after the war-dependent changes were introduced to citizen mining. I just spent last night fine tuning a new class of starter city - its has 2400 popularity.

I would recommending combining, but you may needs some tweaks to get a good balance between cards.

Okay, I've combined 4 of my 500 popularity starter cities into the following 2, 1000 popularity combinations: 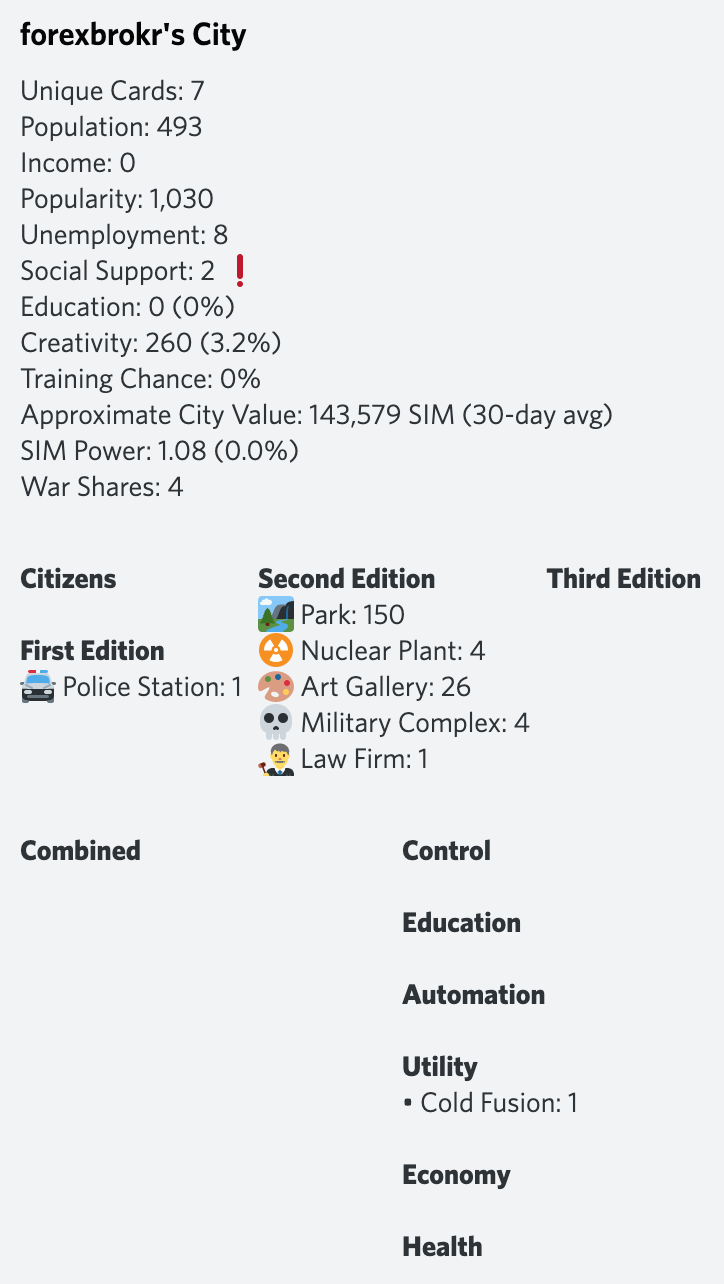 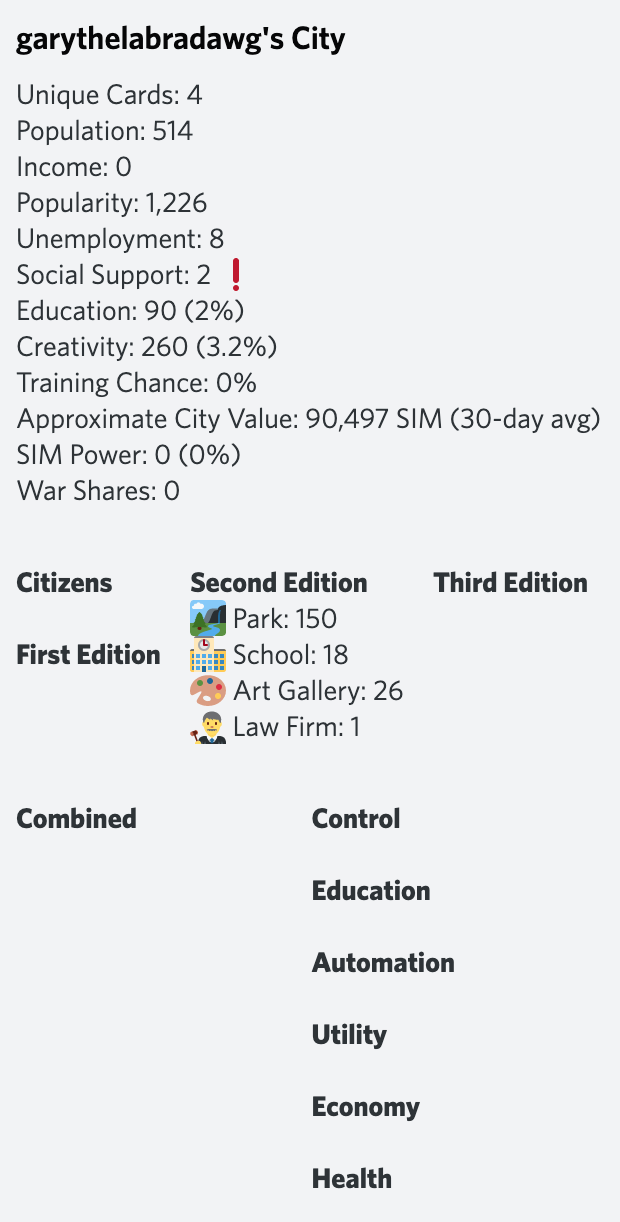 Would love to hear your thoughts!

Actually, I think you might have been better off with 4 🤔

My new model has 2400 popularity with 8% per tick, giving it really nice distribution even in moderately heavy wartimes.

Thanks for explaining it like this man, it's really helpful.

Okay, back to playing around with my configurations haha!

Thinking about this a bit, it kind of makes sense that when gerber introduced more expensive citizens to be mined (young citizen and students), he also nerfed the citizen mining by using war tax adjustments.

Your 500 popularity cities mine as before with no war tax (50 popularity per tick, or 10% every 2hrs at 500 popularity). But with the introduction of the war tax slider, its become much less likely we have days without war tax as current administrations have opted for a 'moderate level' of war tax.

So this effectively increased the popularity required to mine effectively, but the young citizens and students sell at prices much above the homeless and immigrant cards (which we still get as well).

I had a quick look at dcity when starting my hive journey, looks like my type of game, Sloth, idle mining!

Going to save this post and come back to it when I have some more time to properly check through it and try to build a base city, any other tips would be great! Thanks for sharing this.

Great post! I love the way you see the game and how different cards change the metrics. It usually takes me doing the thing then watching it to understand how it is working, but most of the time when you explain something I can see it. Keep it up my friend!
!PIMP

$0.46
1 vote
Reply
[-]
thepimpdistrict (53) 3 months ago
Well shit @summertooth, this post is older than 7 Days days.
Please try PIMPin' a different post.
(We will not send this error message for 24 hours).

Considering the prices right now, it doesn't sound like such a bad deal but I kind of gave up with this account because the last time I checked, I still can't get any citizen drops. Maybe I should try making a new fresh account for it so it doesn't bother me as much.

I would definitely give a new account a try - I'm not sure why your account is cursed but I am sorry for your loss.

That's quite an investment in time, and also some HIVE

@dCity Events are broken, started all of them yesterday and not a single citizen in 14 hrs.

please report in the #support channel. Sometimes random numbers can be brutal, but sometimes something is broken.

I've had all the events running for 22 hours with voice to skull activated and not one card. even i'm not that unlucky lol.

Since I'm looking at this again, do you need workers for full building benefits or just income?

yes, only buildings which are activated provide their income.