First of all my respectful greetings to the entire academic community of @Hive.blog, we continue to expand the knowledge related to the essential phenomenon of sound, and the same as we know we perceive it through our natural auditory systems (ears), this after generating a series of vibrations that become longitudinal pressure waves which disturb the air that is around the source of the sound emitter.

In the previous installment we were able to express that during the propagation of sound, it may encounter a series of obstacles on its way, which cause other intrinsic phenomena to take place, such as reflection (specular or diffuse), analyzed in a general way in the last installment, but also developing other phenomena such as absorption and transmission of sound in the incidence of these bodies or objects.

Each object or body around us is structured by a series of particles or elements that can absorb all or part of the sound waves that impact or impact on them, my dear readers it is important to note that when the sound impacts on a certain surface, a part of its energy will be reflected (as we noticed in the previous publication), a part of its energy is going to be reflected (as we could notice in the previous publication) however, there is another part of this energy that dissipates, and this action, it does it in the form of heat due to the continuous frictions generated with the object or body with which they impact, this makes us express that this energy is not reflected or transmitted only is absorbed.

When we refer to the phenomenon of sound absorption we are referring to the dissipation of energy in the form of heat, and this occurs due to the impact of sound waves with the various bodies or objects that are achieved in its path, and thus, the other remaining energy is reflected or transmitted from one material space to another, and the transmission of sound we will be talking in a general way in a next installment.

To understand more clearly we can say that if we have two media such as A and B, and these separated by an obstacle where the sound waves try to pass from A to B, then, before reaching the medium B these sound waves will impact with the obstacle, if the obstacle has particles totally absorbent of the dissipated energy of the sound, then, the sound will not pass to medium B, and this dissipation of energy occurs due to the friction of the sound waves with the component particles of the object, and the rest of the energy will be reflected and return to the initial medium. 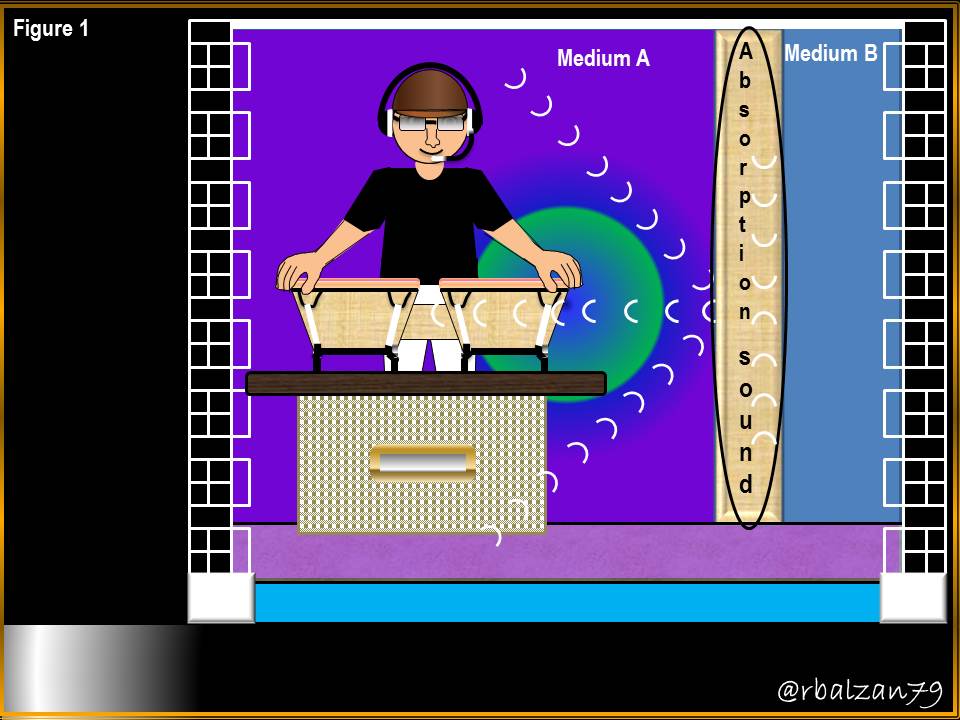 In the previous figure 1 you could notice how a part of the energy of the sound waves were reflected to the same initial medium and the other energy was absorbed by the obstacle, therefore, the obstacle can be considered as sound insulator since it does not allow it to reach medium B, however, there are materials that let a portion of sound pass from one medium to another, which develops the phenomenon of transmission and we will talk about this in another installment.

My dear readers, it is important to keep in mind that each obstacle to the propagation of sound will have certain elements that will give particular absorption coefficients to each of them, and this will also depend on the frequency with which the sound propagates through these obstacles.

In this way we can express that the absorption coefficient of a given material constituent of a body or object, will tell us how much energy it will absorb from the sound waves, therefore, we have the following relationship.

This coefficient is related to its natural composition, i.e., porosity, thickness, density, among other unique or particular characteristics of any constituent material of those obstacles to sound waves when propagating from one material medium to another.

Constantly our ears are reliable witnesses of the innumerable sounds originated in our environment, and these can come from both natural or artificial sources, the important thing is to take into account the phenomenon of sound to originate must occur a vibration of the component particles of a given body.

Sound waves when emitted travel from one space-time to another, therefore, this means that they may encounter a series of obstacles on their way that in one way or another influence their normal propagation, as we have seen with the development of sound reflection and sound absorption, the latter being analyzed in general terms in this article.

Until another installment, my dear Hive.blog readers.

Note: All images are my own and were created using Power Point and the animated gif was created with the PhotoScape application.

[2] Reflection and Transmission of Sound Waves..

Congratulations @rbalzan79! You have completed the following achievement on the Hive blockchain and have been rewarded with new badge(s) :