When You Believe You Live in a Free Society

Freedom under moral law doesn't matter, because the law they make is more important and supersedes morality, non-aggression, etc. 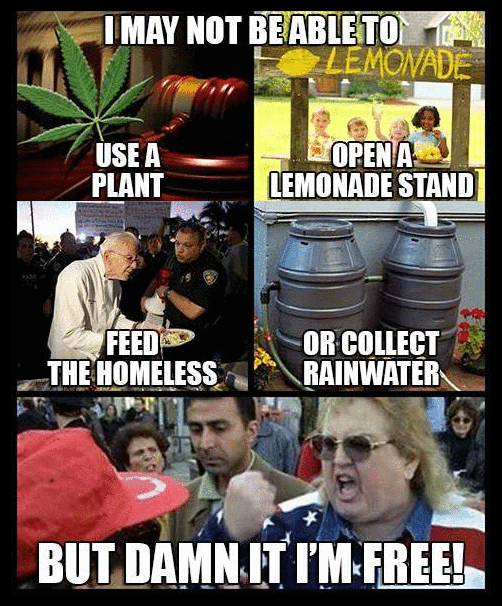 We know it's the best way to live, because otherwise, it would be chaos.

So we can't use a plant of our own free will. They put us in cages if we get caught doing that. But in other places, we don't get put in cages, or have money stolen from us. Odd.

Kids can't runt heir own little lemonade stand business in some places, because that's illegal under their made up laws.

In some places, they make it illegal to feed homeless people, fine us, lock us up, and throw away the food.

Some places even prevent people from collecting the water from the sky, as if these people get to decide what happens to that water.

But still, we believe we are free, because that's the illusion that keeps them in power.

Yes, indeed. In the land of the fee and the home of the slave.

Still the most free of all the slaves ;)

Congratulations @quityourcult! You have completed the following achievement on the Hive blockchain and have been rewarded with new badge(s) :