Making a Blackfish fishing float with a homemade lathe

Winter is time for Blackfish (Luderick) fishing for me. They can be fished all year round but winter is my favourite time for fishing because there are less people and my garden and worms have slowed down considerably.

The most common way of catching Blackfish is to use a float. Depending on where you fish, you will need a different type of fish. Where I usually go we use a long heavy wooden float so we can cast far if needed. I used to buy my floats from a local fisherman but sadly he passed away several years ago. I still have a few of his floats but I thought it would be fun to try replicate his design and make my own float. 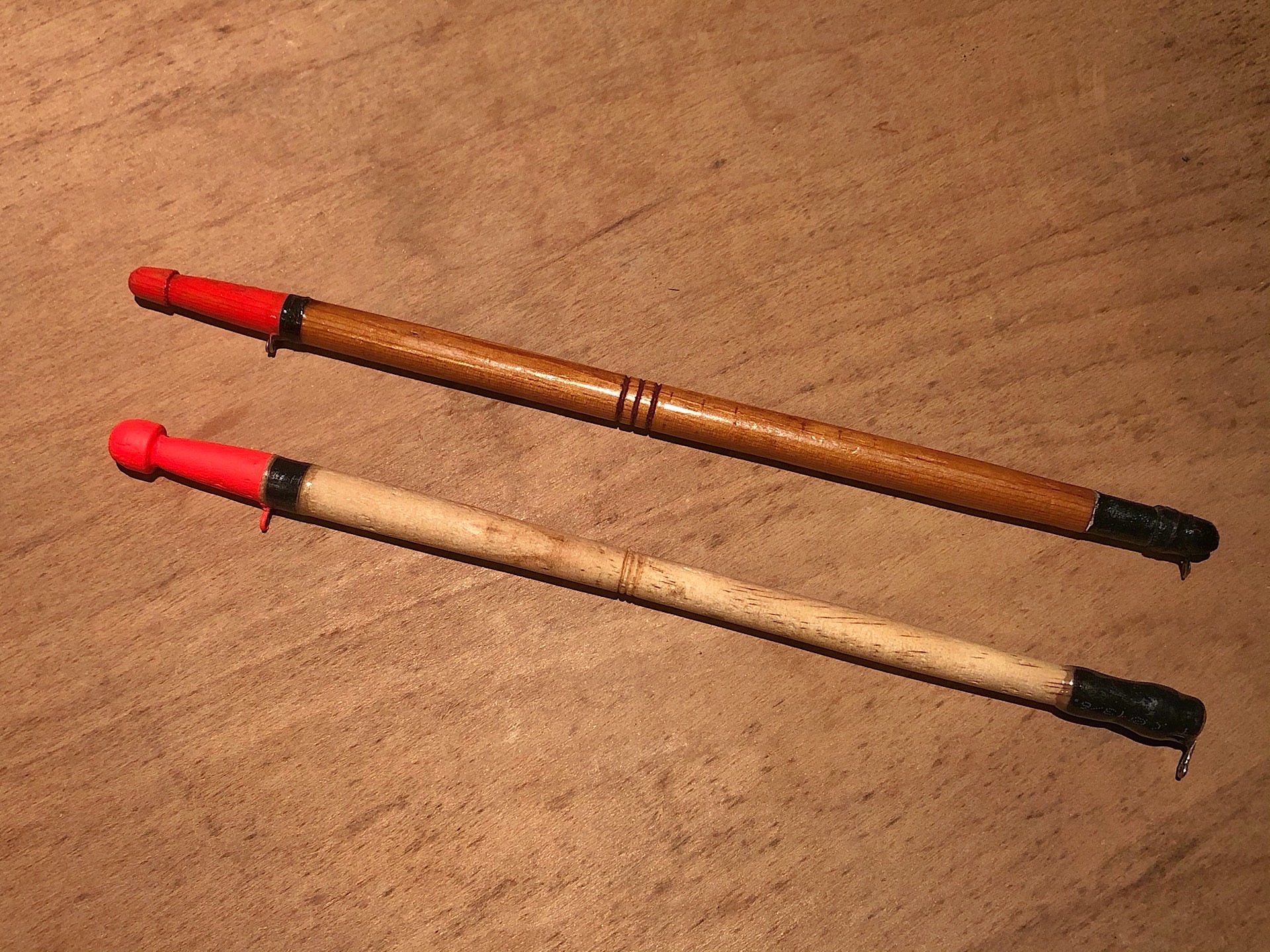 On the photo above, the top float is the original one I bought and the bottom one is my own one. This is a project I wanted to do for few years now, I watched a lot of videos on how to turn wood but I didn't want to spend money in buying a lathe and was always worried about making my own but yesterday I just decided it was time for me to step up and just do it. So I took my power drill and fetched pieces of wood and foam and started improvising something that hopefully might work... Yeah, I don't do plans lol. 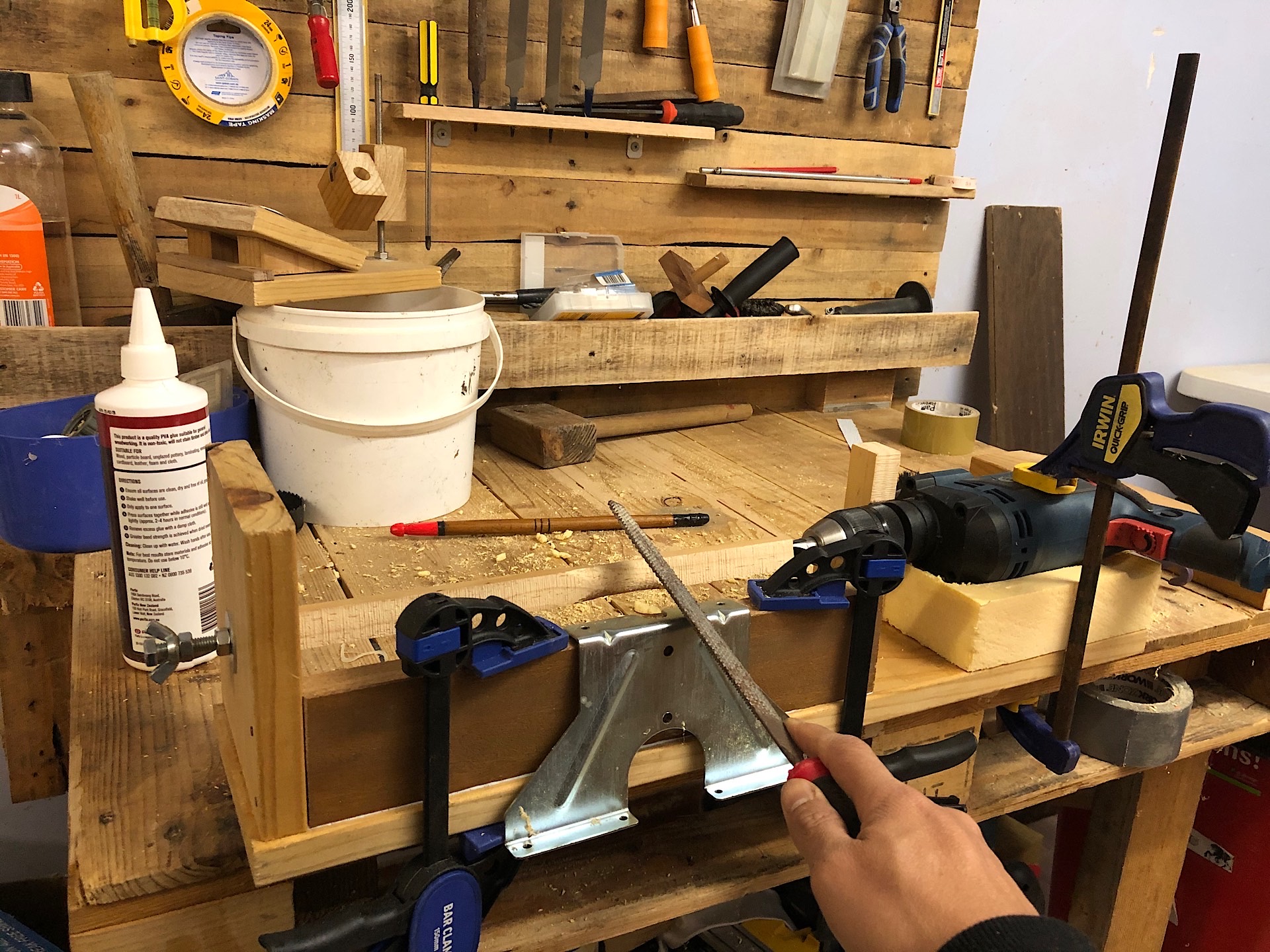 So after several measurements, cuts, glueing... I managed to get something that... well... can turn some wood. 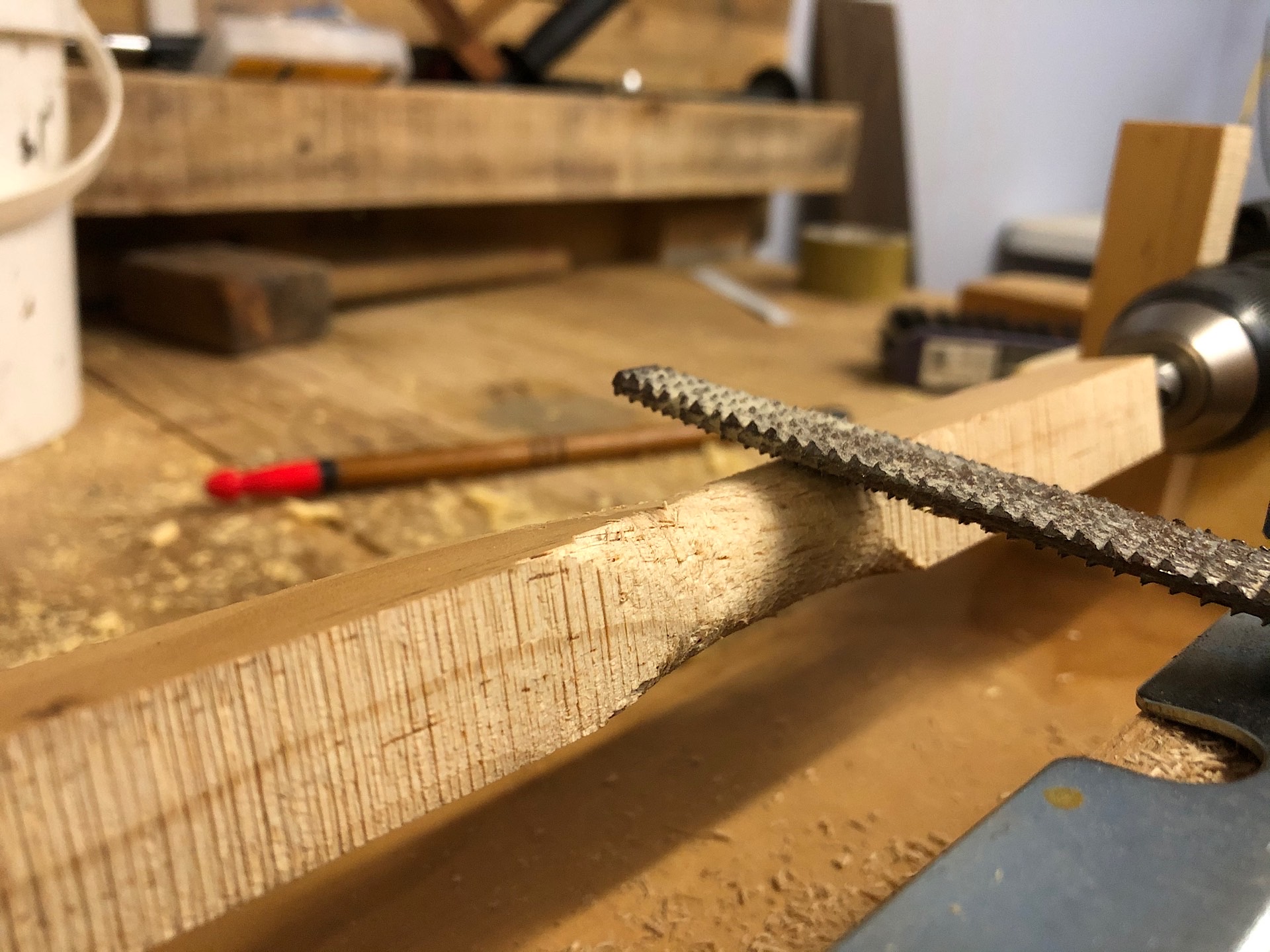 My local hardware store does not stock wood turning chisels and they are expensive anyway so I used a rasp file instead to turn a square piece of wood to a round one. 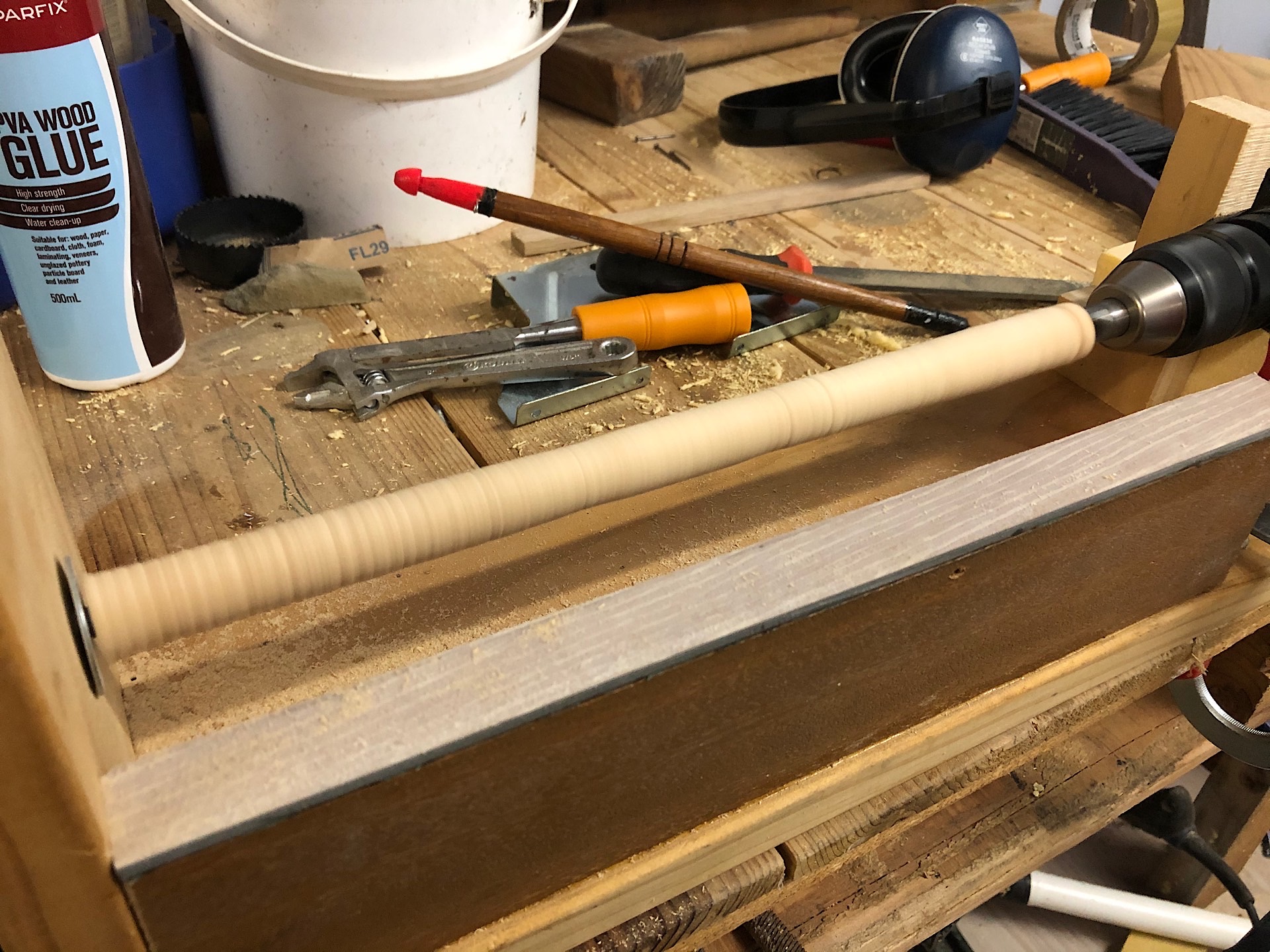 It did take me a long while to get that piece of wood round but I got there in the end. I needed to adjust the speed of the drill and my pressure on the file but it did work and that's the main thing. 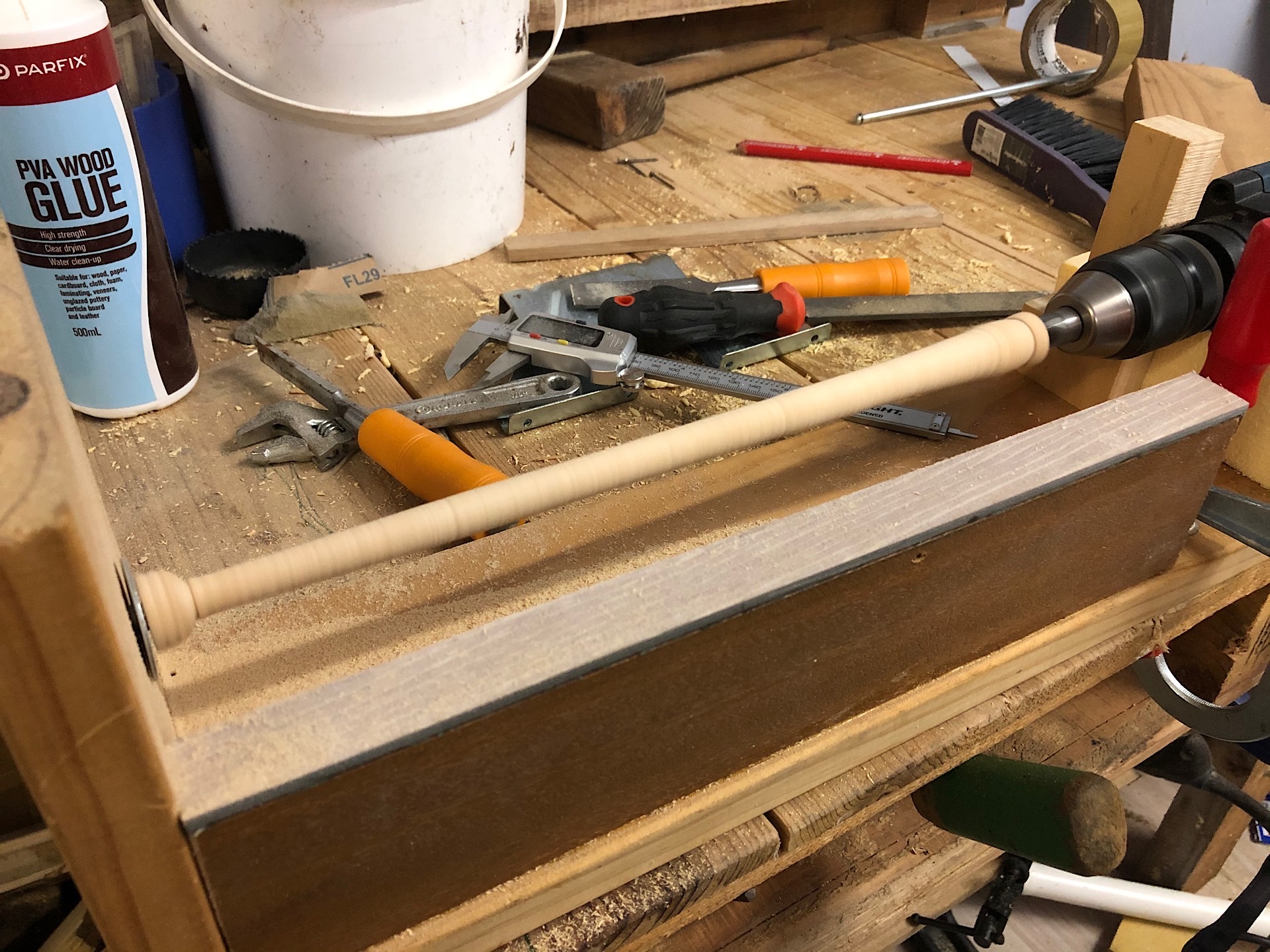 Once I got a long dowel shape, I started using regular wood chisels to create the bevel for the bottom and top of the float. They didn't work great and were a bit dangerous actually, several time I almost made the wood jump out but I was wearing protective glasses but tomorrow I will buy myself a face shield! 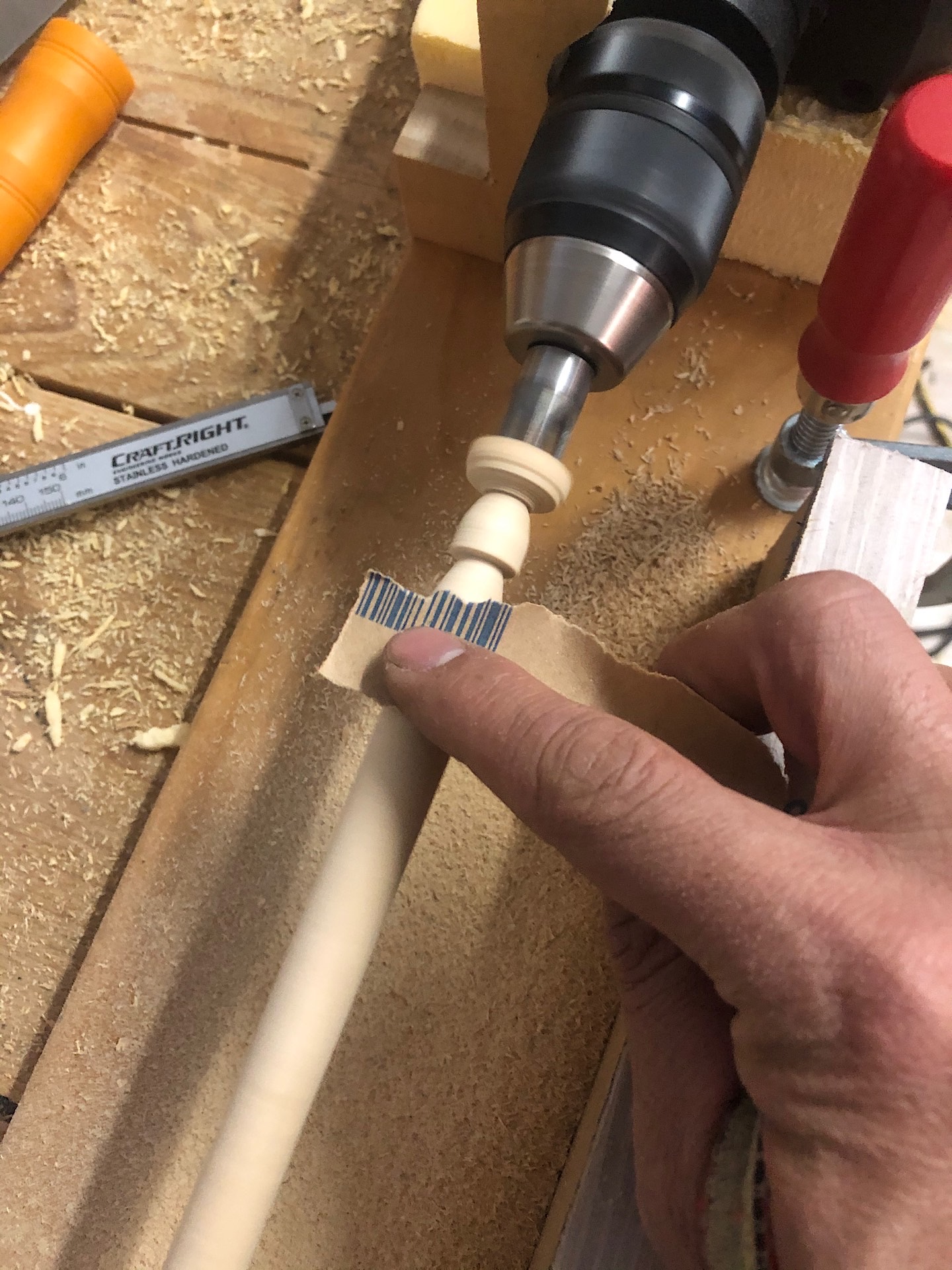 For my own safety, I slowed down the process and carved the float down bit by bit making sure I don't apply too much pressure when using the wood chisels. With some fine grit file and sanding paper I smoothen the surface of the wood. 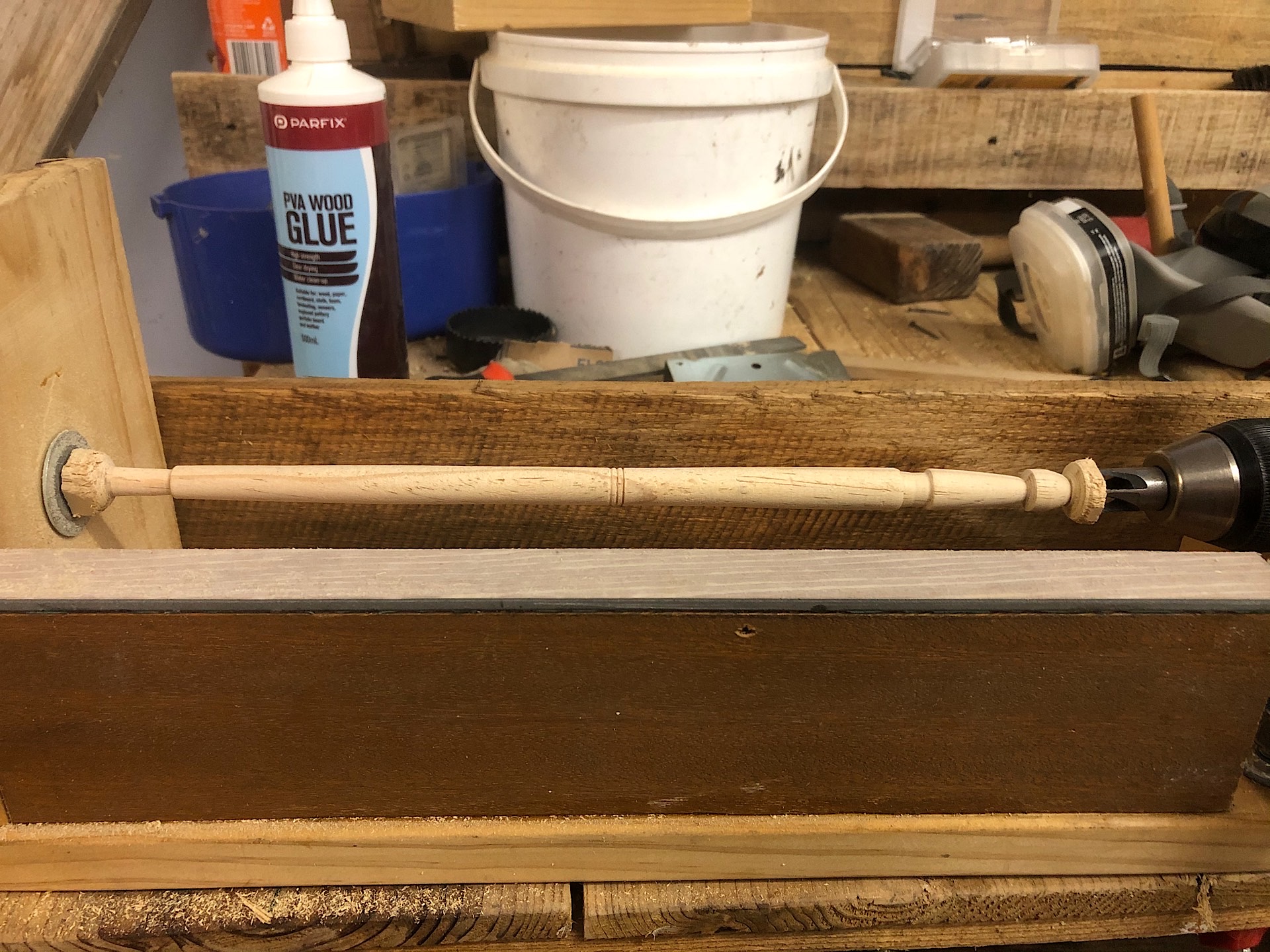 After an hour, maybe two, I can't remember, I managed to get my float. It's not very efficient but this is my first time turning wood so I learned quite a bit and it was awesome fun seeing the piece of wood taking form progressively.

Below are some detail shots. First this is the bottom of the float. Where it gets narrow is the location of the bottom eyelet I made by cutting the eye of a fishing hook. It will be held in place with two part epoxy glue and wrapped with several turns of solder wire to pre-weight the float. 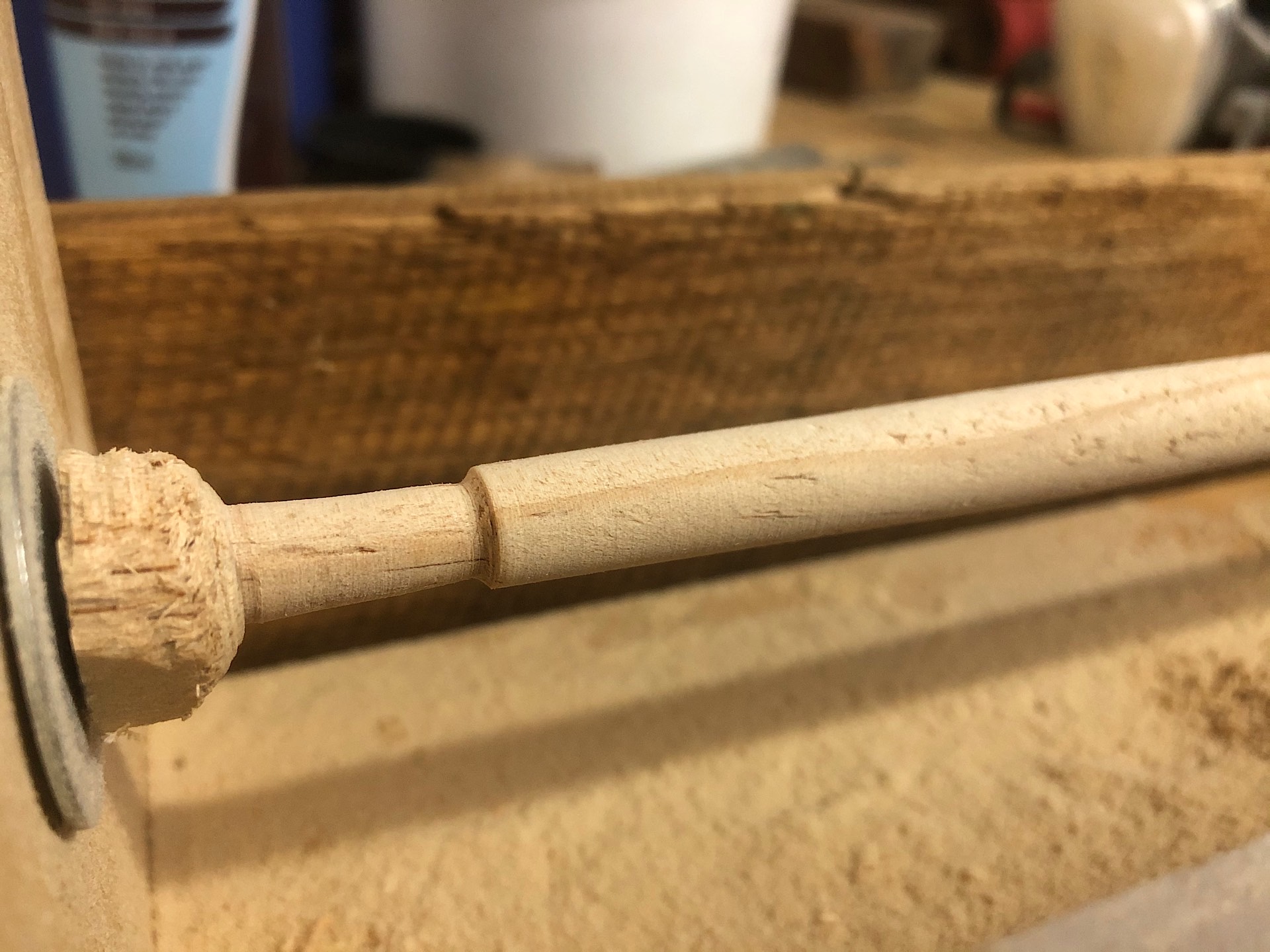 Some decoration was added to the float to break the monotony of the body. 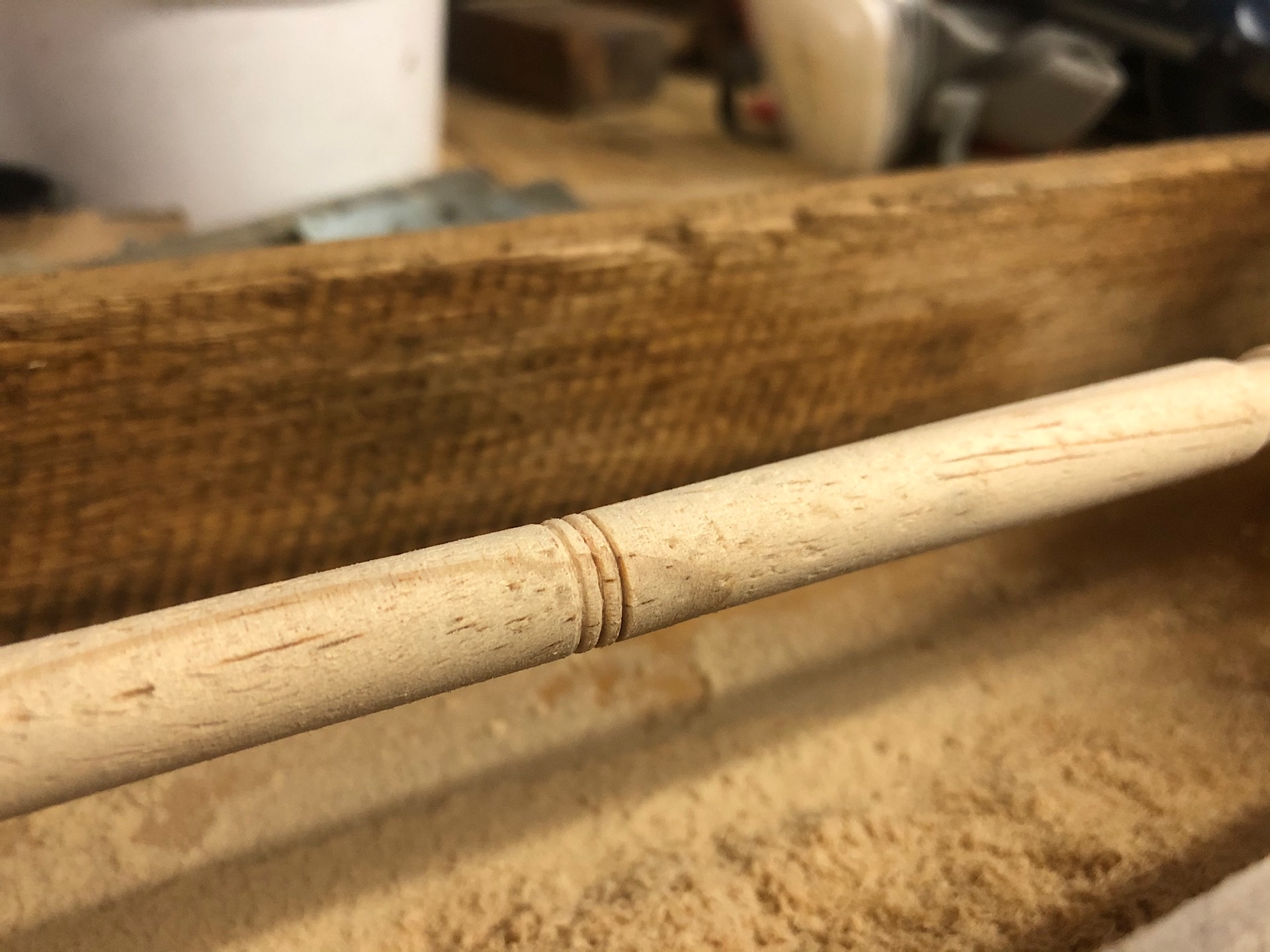 And finally the top of the float. The first ident is to glue on the top eyelet and the mushroom head is to create a larger surface area for visibility. 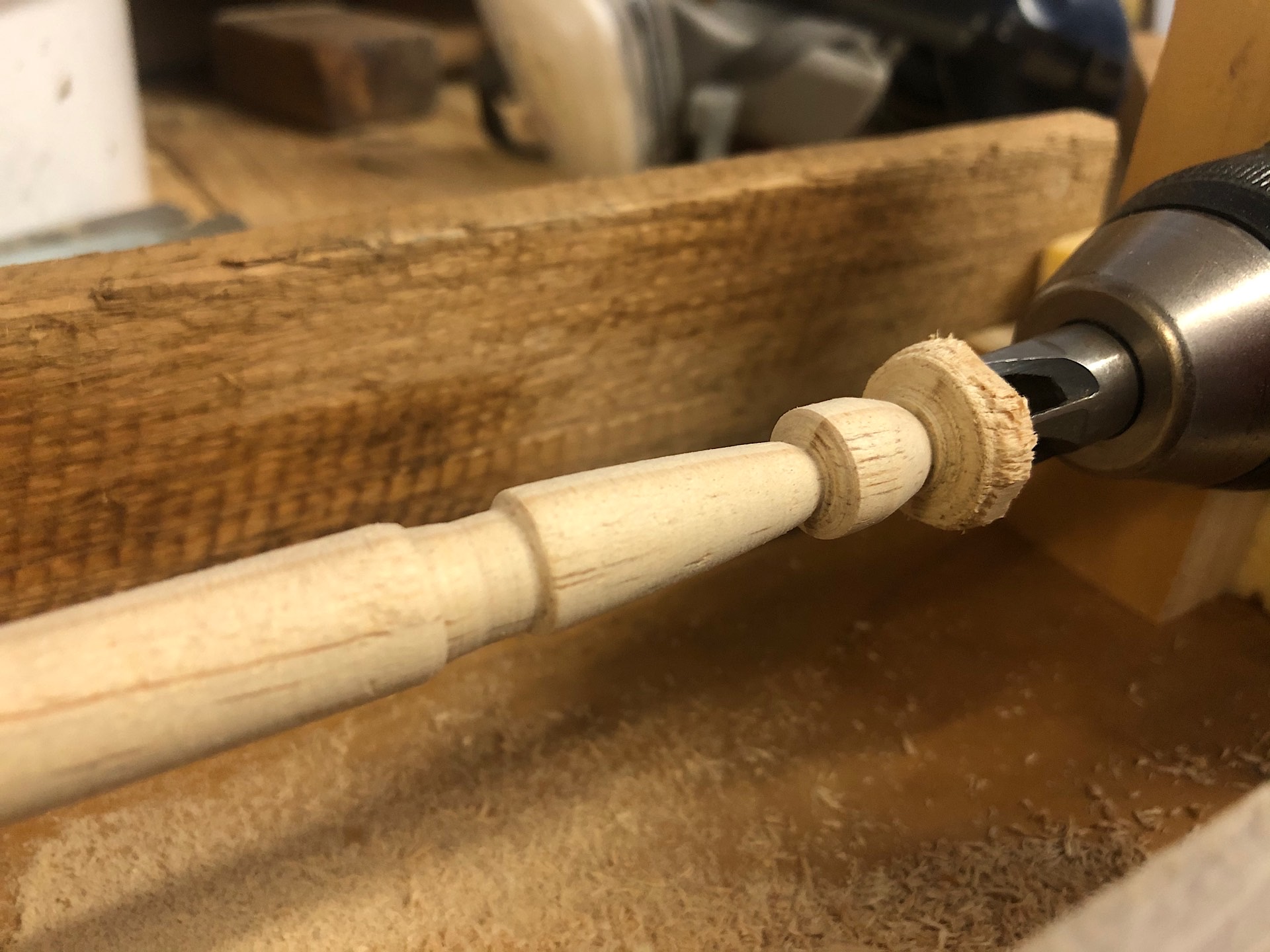 After glueing the eyelets on, I wrapped them with black shrinking tubes for protection and colour contrast. I covered the tube and surrounding wood with epoxy for waterproofing those areas. 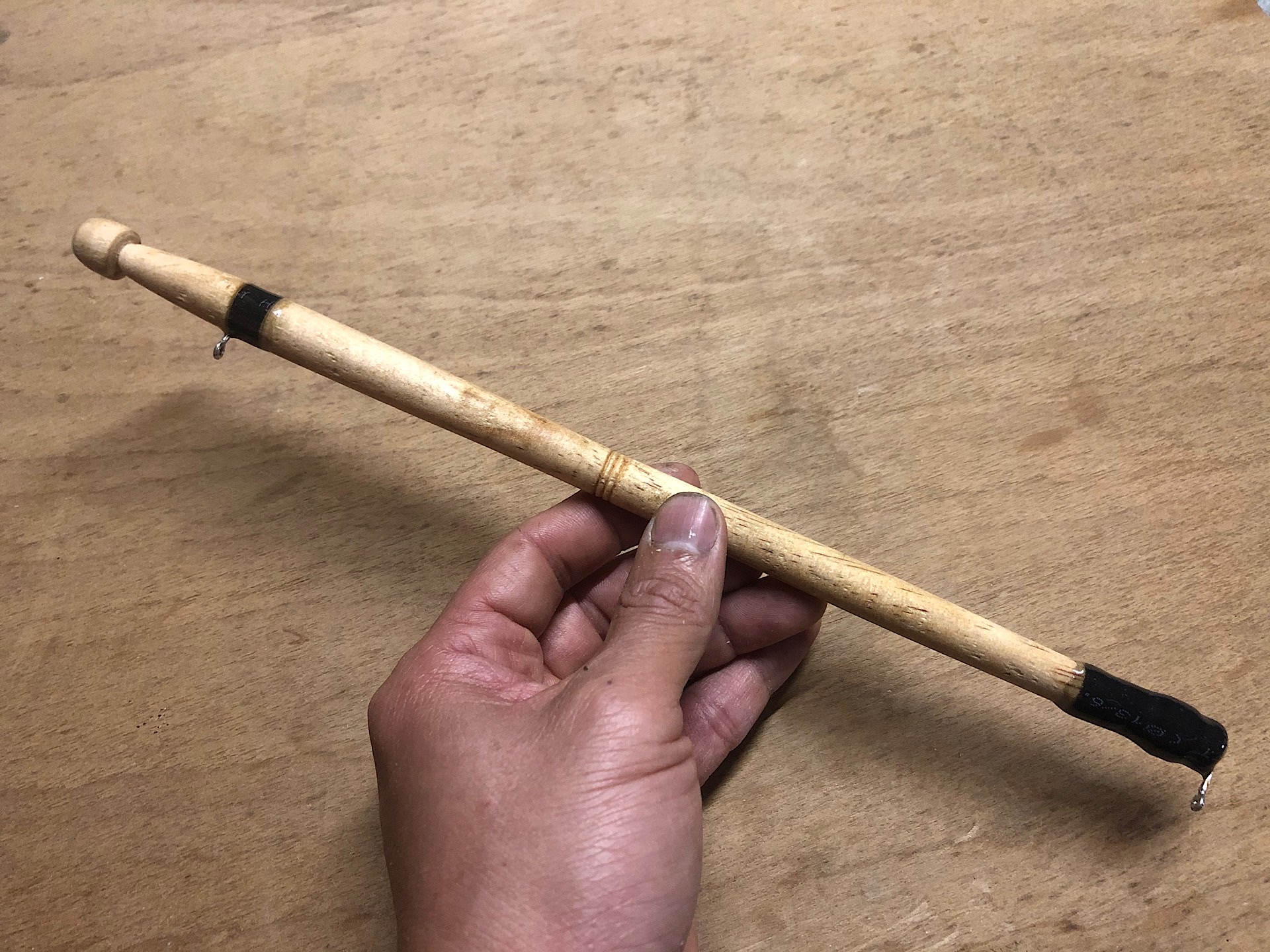 I then painted sealed the wood and painted the tip of the float with a high visibility red spray paint. 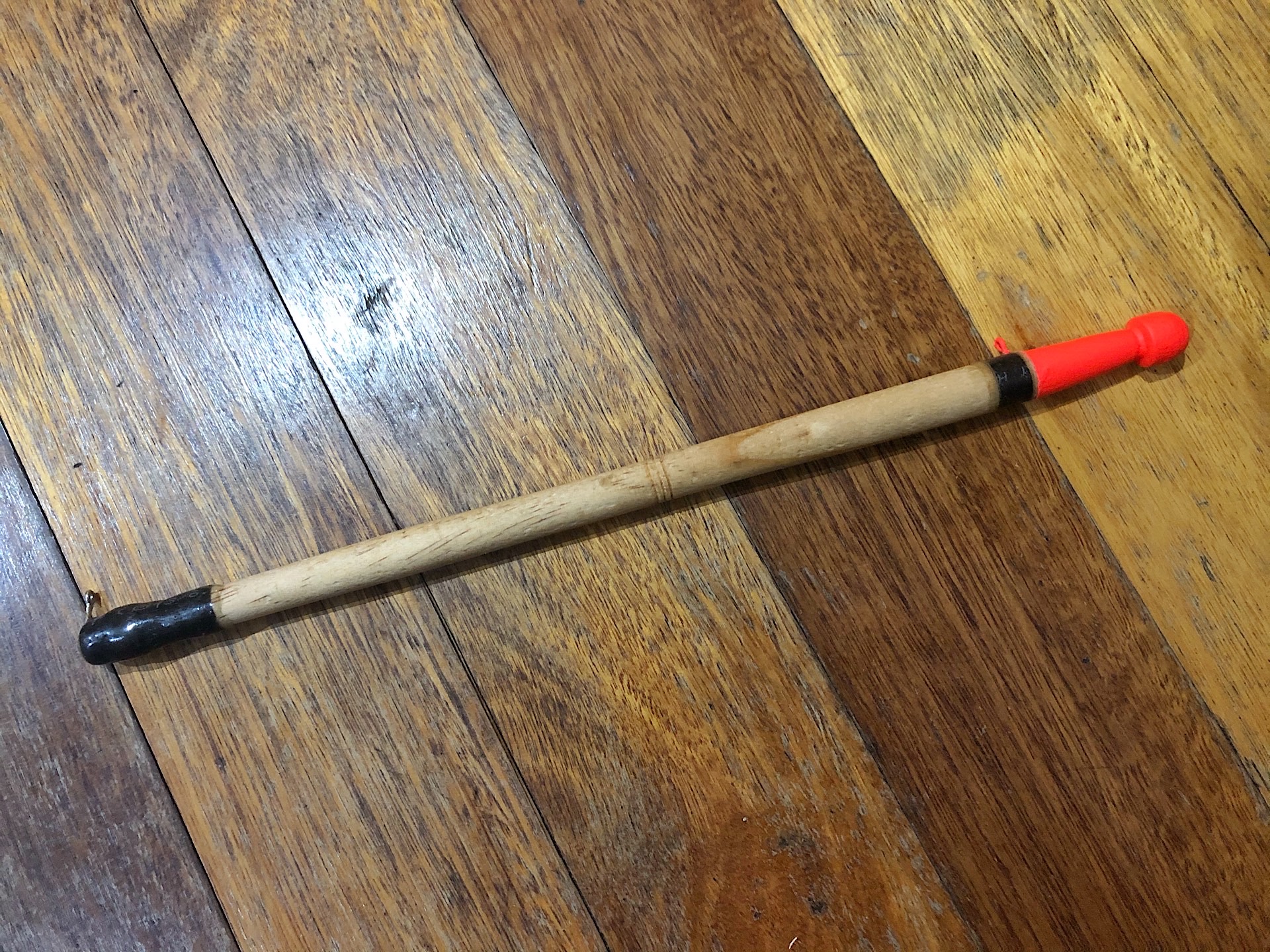 The end result is not bad at all but there is still a step missing: testing the float and catch some fish with it!

Creativity most of the time is time consuming but then end result is always worth it. The float beautiful. Waiting for to see what it catches.

Hopefully a lot of fish :-D

First of all Rest in peace to your salesman. My barber died some years ago, my life has not been the same.

Then my my, what a lovely job you did. You should consider sells too.

I would consider selling some if I get my production process faster. Floats like this usually sell for around A$8 but it took me between 1 and 2 hours to make one so it's not really profitable. Maybe in the future.

Yeah. I totally understand you.

I don't know much about fishing. I'll learn more about fishing in Nigeria. There aren't places reserved for fishing around here but we have lots of fish. Some can be found underground even especially in the riverine areas.

That's pretty neat! Wood working and lathe work can be so fun. My dad wants to do a lot of stuff like that but getting the shed sorted to a point where there is enough space is quite a pain in the arse.

I hear you mate, my wood working gears are located in three different locations and I have to travel from to another to access various bench tools. I’m still working on making some space so I can put them all next to each other. Keeping things clean from dust is another challenge

This is a hobby for you and obviously you are working hard and you love it. I liked this great article. Your photos are also beautiful. Keep it up, please, I just discovered you and I will definitely read your posts.

I love your lathe so simple yet so effective.

Weldone! This is a good one. And your workshop is well equipped.

and in childhood I made goose feather floats

You are such a creative man. I think you like exploring too. I wish to go fishing one of these days

Old ways of making things dying out.. Good to see you reproducing a tried and true design.. 😊