Dice? or No Dice?

azircon (74)in Splinterlands • 2 years ago (edited)

Yesterday was an interesting day for me. I am a @splinterlands player. I play the game from a true card game player's perspective. I don't think about investment or reward. Although, I understand the importance of those elements. When I play.... I just PLAY! I usually have a BIG GRIN on my face and I battle.... the rest of the world disappears when I do that. 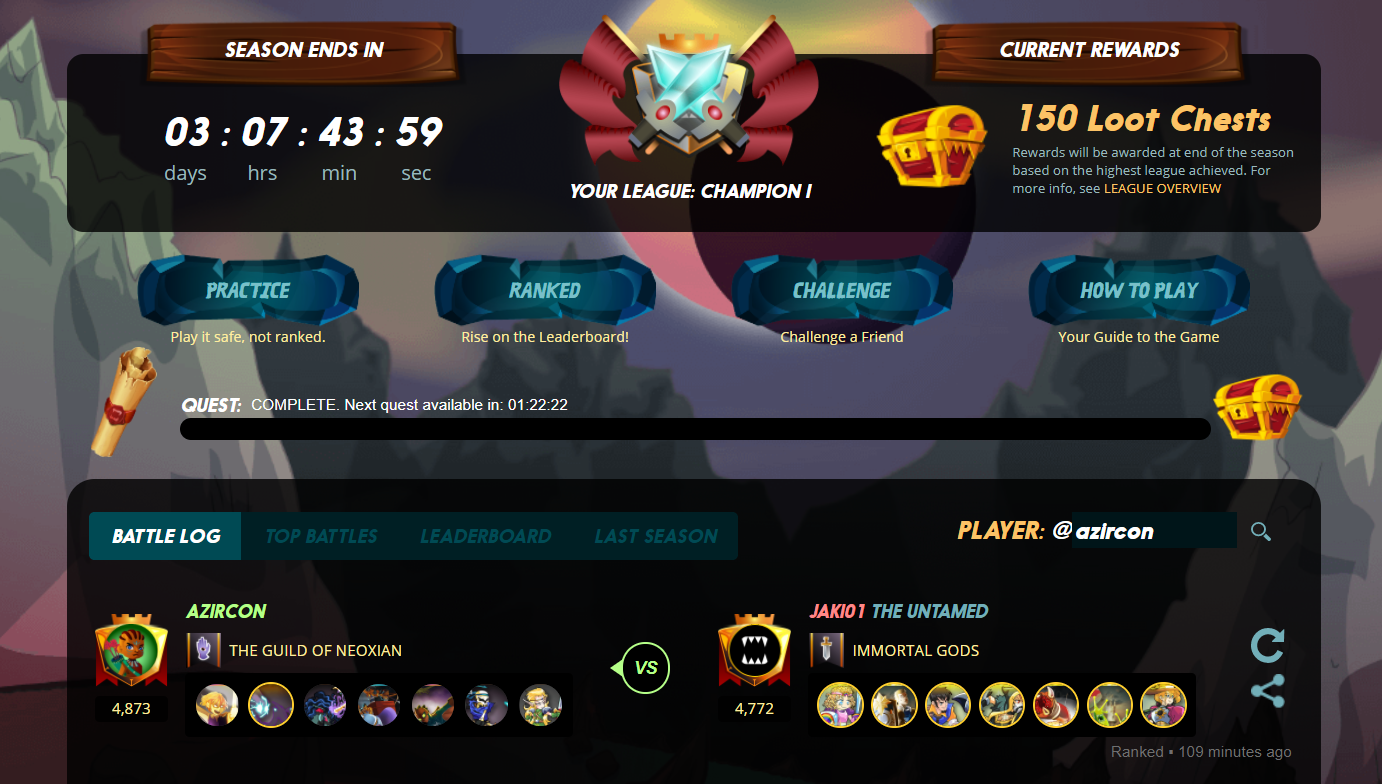 I always enjoy when I am on this page.... and clock is ticking towards the season end!

So this is the way it happened. I was stocking up on DEC in anticipation of DICE release. But since I play between work, I completely forgot about the release time. It was @zaku who reminded me, asking if I have bought any Dice. Although, I was stocking up on DEC, I never planned on buying too many Dice. I normally do not buy packs. I started playing late, and typically opt to buy cards that I need from the open market. That's been my method of building my deck. So when Zaku asked me, I was caught a bit off-guard, firstly, I was busy and haven't researched the cards, secondly, I thought why would I buy? Mind you, I have only bought 220 total packs during my 8 months of play. So I thought okay, I should buy a 100 pack to show support for the game. With my guild discount that amounts to 110 Dice. I bought, and I opened... 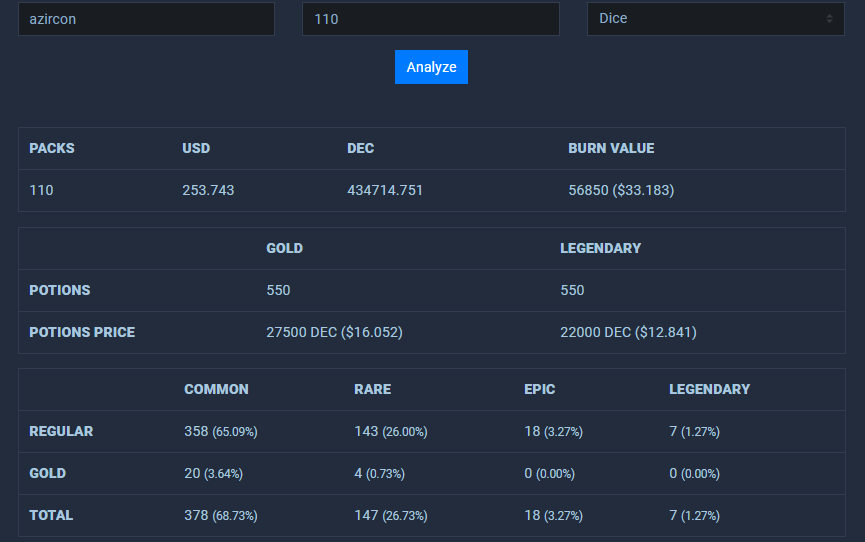 It was a modest open. Here is a screenshot from @monstermarket (I am told DEC values are not accurate yet, but will be updated by this weekend by @reazuliqbal). I saw many people are posting GFL from the Dice opening. I didn't have any GF neither epic nor legendary. Yeah, I did use the potions :). So I opened the 110 Dice, and swiftly forgot about it. Then later in the evening, as I was lying down reading a book, I got a mention from the splinterlands discord server from @kiokizz, that I got a Mighty Dricken! 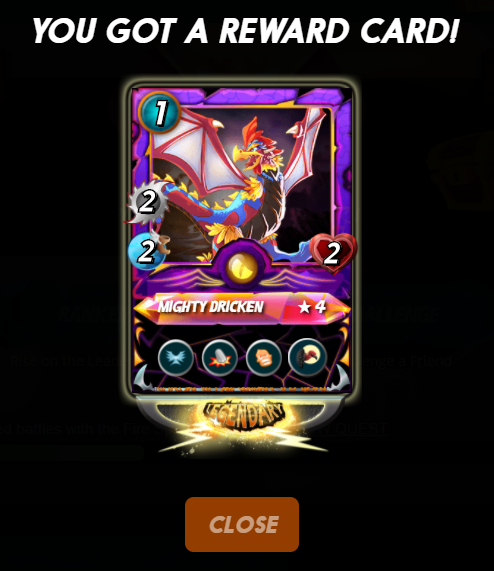 It took me a while to even realize what, why and how! Then, slowly I understood that I got one of the most rarest Dragon Cards from a Mystery Reward. I rarely buy that potion, and on a whim bought 10 last season, it came out from the 8th one I think. That the 8th ever mystery potion I bought! So I WAS lucky.

Having that 1 Mana Dragon Chicken (joking!) gave me a strange sense of 'luck' and 'longing'. It took me back to my early days of Pokemon card opening. The physical cards! I thought, okay I will buy Dice! So I did... 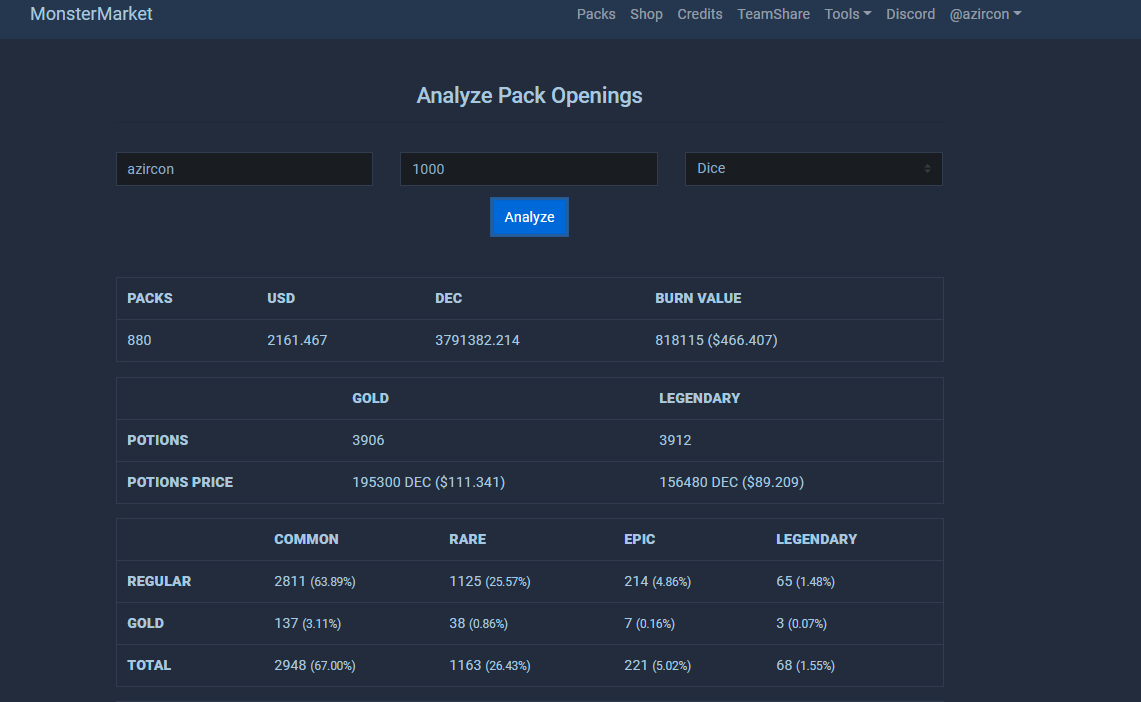 So here I am with Maxed everything on the Dice set :) I will you all in the battlefield ;) 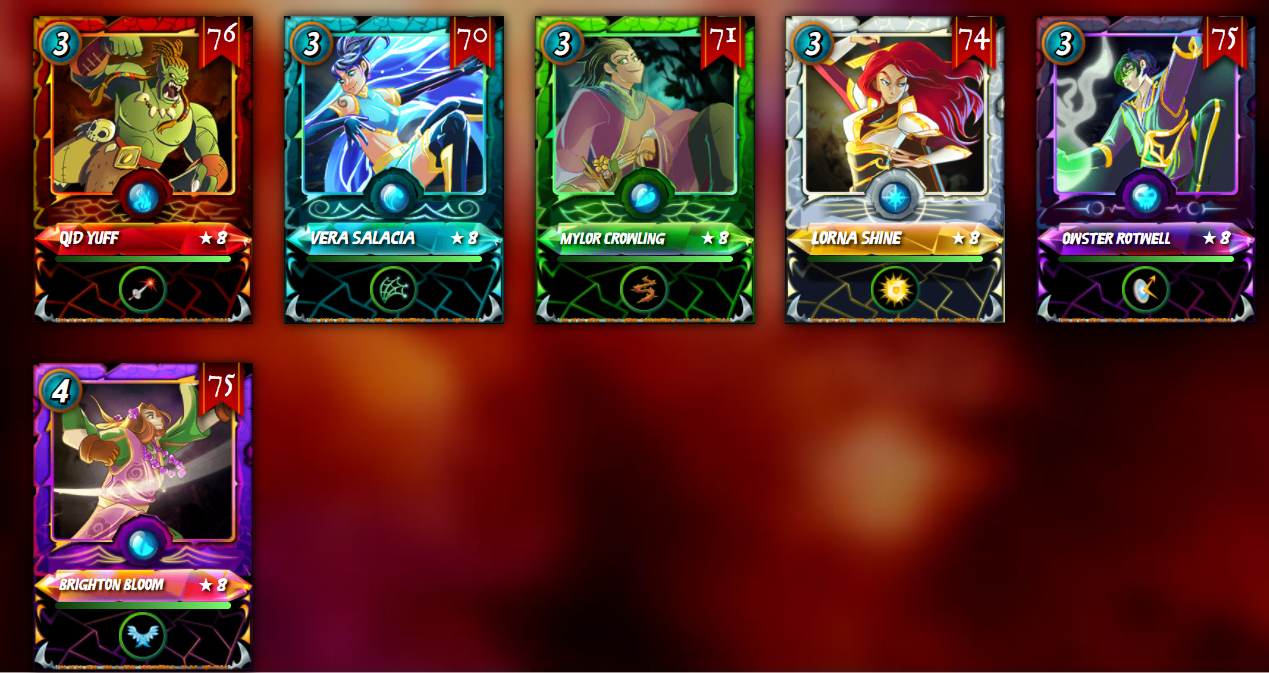 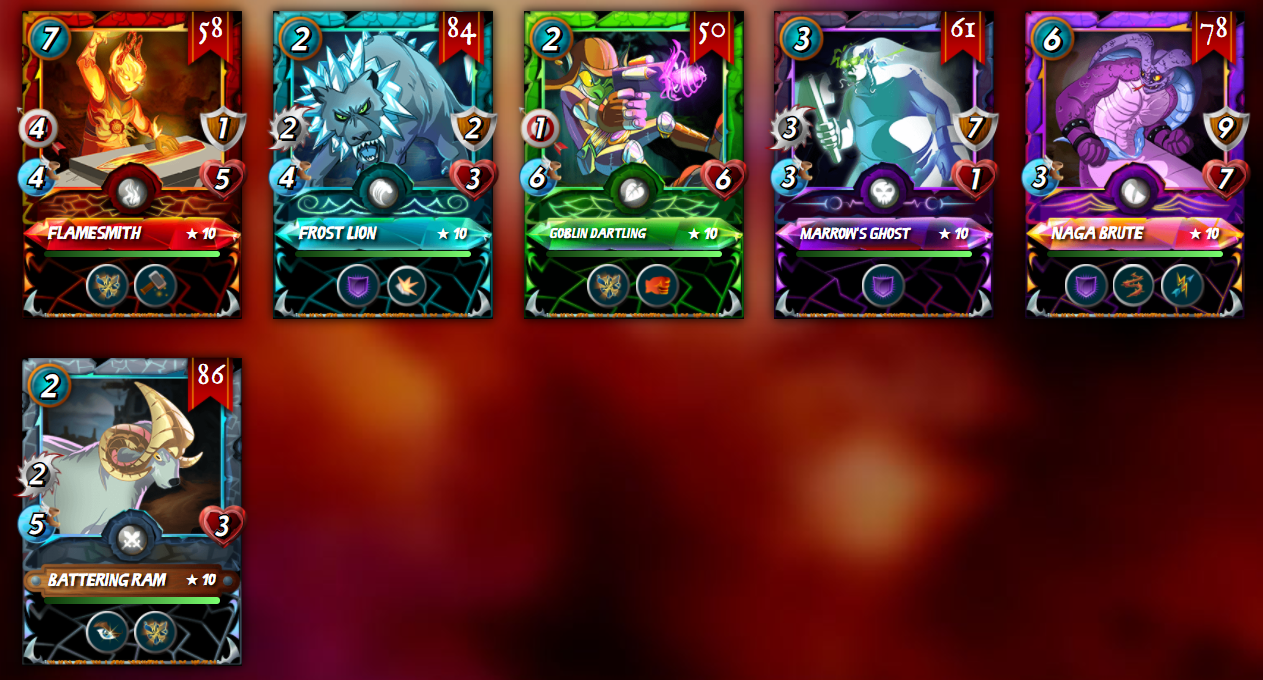 So here I am with Maxed everything on the Dice set :) I will see you all in the battlefield ;)

Great! It showed up finally for me on peakd! LOL! This is a great post, I love all your new cards...hopefully, in a few weeks I will have most of them maxed too! You are awesome! ~@clove71

Wow!! I t will take me a little bit longer but I can't wait to max out all my DICE too! I do not want to meet you on the battlefield! An upvote from Splinterlands is on the way! I can't find this on peakd to upvote it! https://peakd.com/@azircon :-(

Posted out of hive.blog. But I do see it on PeakD. I am typing this on PeakD. These days PeakD and hive.blog are out of sync sometimes...

I guess you got to look here

Okay, I will keep checking but I still do not see it there on my end. I did also notice a little buggy lately there but I will keep trying!

@clove71 -- Haha. Yeah, I learned through experience (having OVER-spent on Orbs in the same way this guy did - nothing wrong with doing it this way, of course) that, for me, it is BEST to obtain new cards/editions in a more ORGANIC way. That is, go slowly, learn about the cards through using them from the lower levels up, etc. I just hit a gold life" Untamed card in a reward pack, and I may convert that to DEC and buy a few packs "for good luck", but may then take the more organic approach. I can also convert any of the remaining seven Untamed airdropped cards to DEC and buy Dice packs. Each person will settle on a strategy which works best for them.

Champion I sure seems like a different world^^ It might take another year to get there for me... congratz!

I think the summoners are better suited in the lower leagues... in niche rulesets.

I also bought packs - the awards pleased me - tomorrow I will write about what I got.

Most of these summoners didn't look like much at first glance, but dang! With the appropriate rules these changes the entire dynamics we got used to so far! Interesting days ahead!

I am impressed with the rare summoners of the dice. Art work is excellent, fresh; and the utility is niche. So I think it will elevate the game and employ complexity which is welcome.

I will see you all in the battlefield ;)

Sure ... it will be fun. I am still getting the hang of these things, so loosing more games than winning.

Nice, @azircon.
A bit jealous, since I could only afford 220 Dice. But I can't really complain, since out of those 220 packs, I got 2 gf legendaries and 2gf epics and most summoners at level 5 and 6.
Because of that luck, I'm of course eager to buy some more. Gotta save up first, though :0)
Can't wait to get them maxed myself ... I really want to try them all out

I have terrible luck, and I have never bought any packs basically... compared to many.... Somehow that dricken did something to me!

I'd quite like one of those drickens, even though it's not terribly useable!

I'll probably buy ten packs to show some support, but I'd rather keep my DEC for land.

I do like the look of a couple of those legendaries and some of the lower mana cards, oh and the thorny summoner too.

I think the prices will come down. They always do. So no big deal.

I am totally out of the loop with the new cards and wonder when my 'originals' will be no good in battle any more :)

I don’t think your originals will have “no use”; but they will suffer power creep which is typical of the card game. Fact is after 1400 Pokémon later I still use my Venusaur which was Pokémon #3 released 22 years back!

That's good to know. I'm hoping they'll still be of use, along side some newer cards at some point...

congratz that chicken is awesome!!

Haven't bought any dice yet, but started picking up some cards.

Congrats on the Dricken, I bought mine!

Dricken is the thing that pushed me over the edge!