During the last 30 days, I have measured the performance of HIVE and STEEM API nodes. Every hour, a new benchmark of all nodes was done and the results of the benchmark have been storing at @fullnodeupdate.

The following plots show a dot for each working fullnode for every hour of the last 30 days. HIVE and STEEM API nodes are marked with different colors (HIVE is shown by a red diamond and STEEM is symbolized by a blue dot). 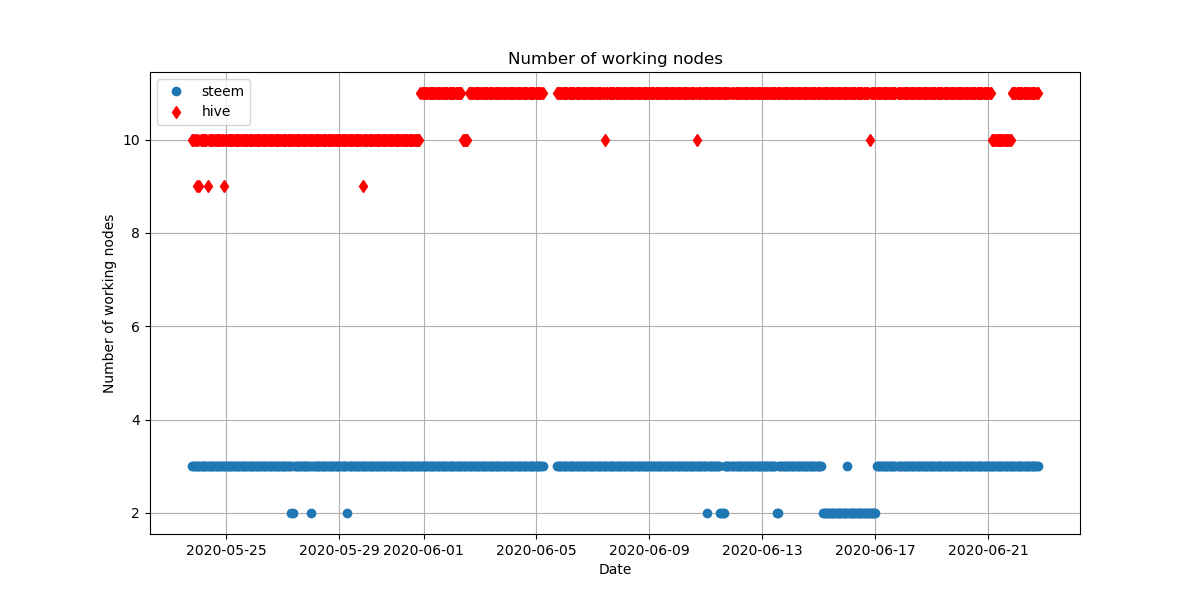 This plot shows the number of currently responding nodes. The number of API nodes for HIVE is significantly higher than for STEEM. 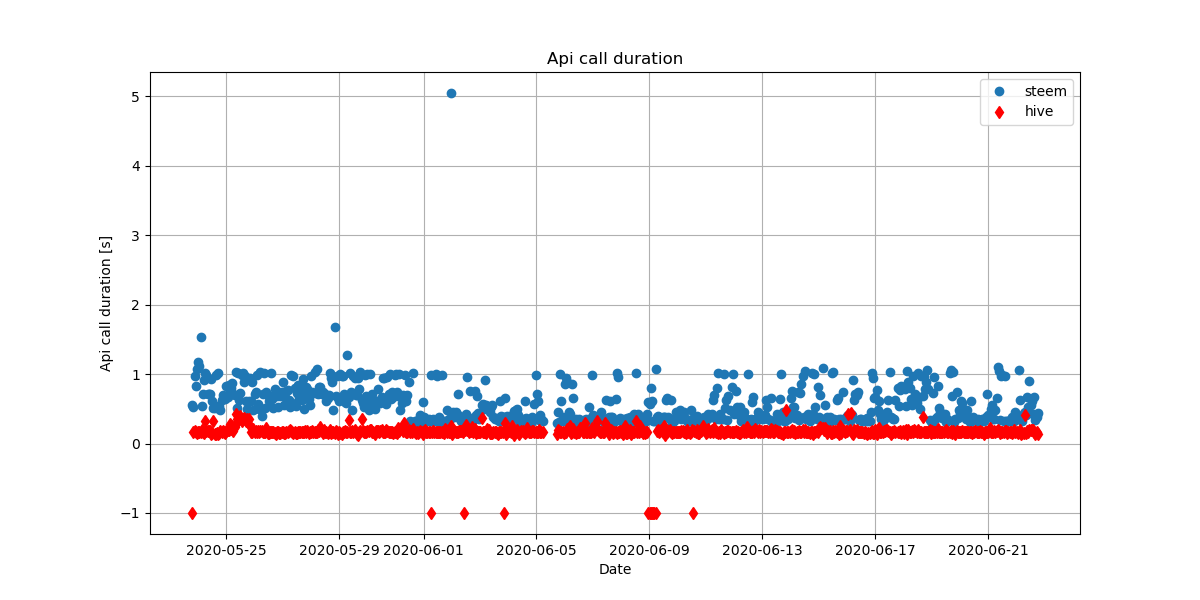 This test measures the mean duration for receiving information about a vote, a comment and an account.
Almost all API nodes are faster on HIVE.
The median call duration is significantly lower on HIVE.

It can be seen on the data that splinterlands has moved from STEEM to HIVE at 1. June. The call delay on STEEM is higher before the 1. June. 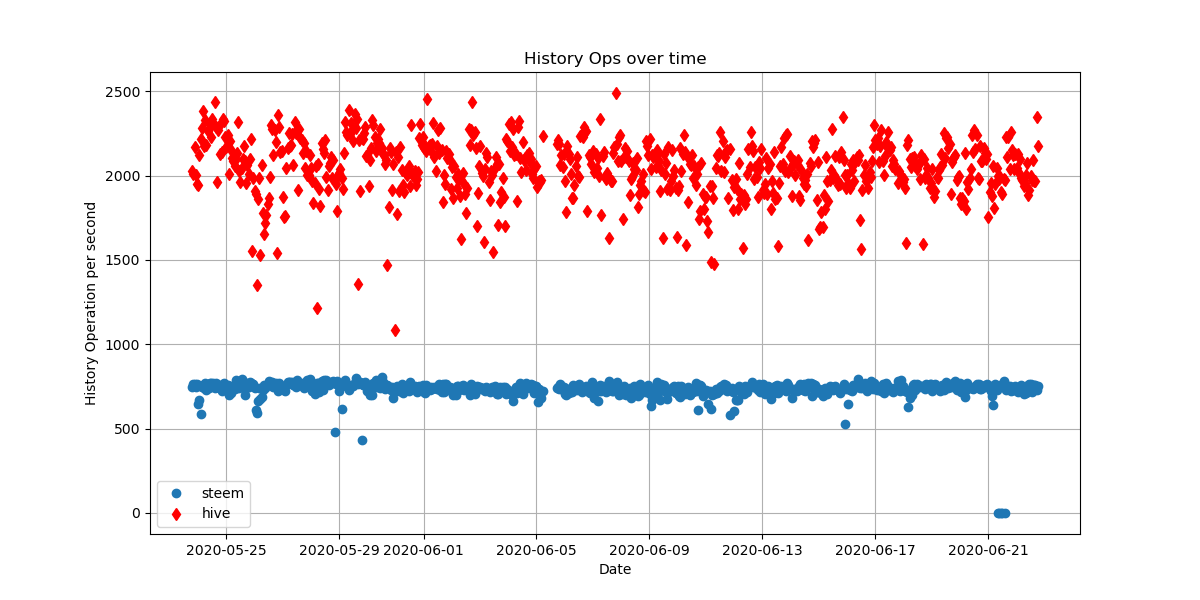 All HIVE API nodes are able to serve account history faster than on STEEM. The median account operations per second are 2.8 times higher on HIVE. 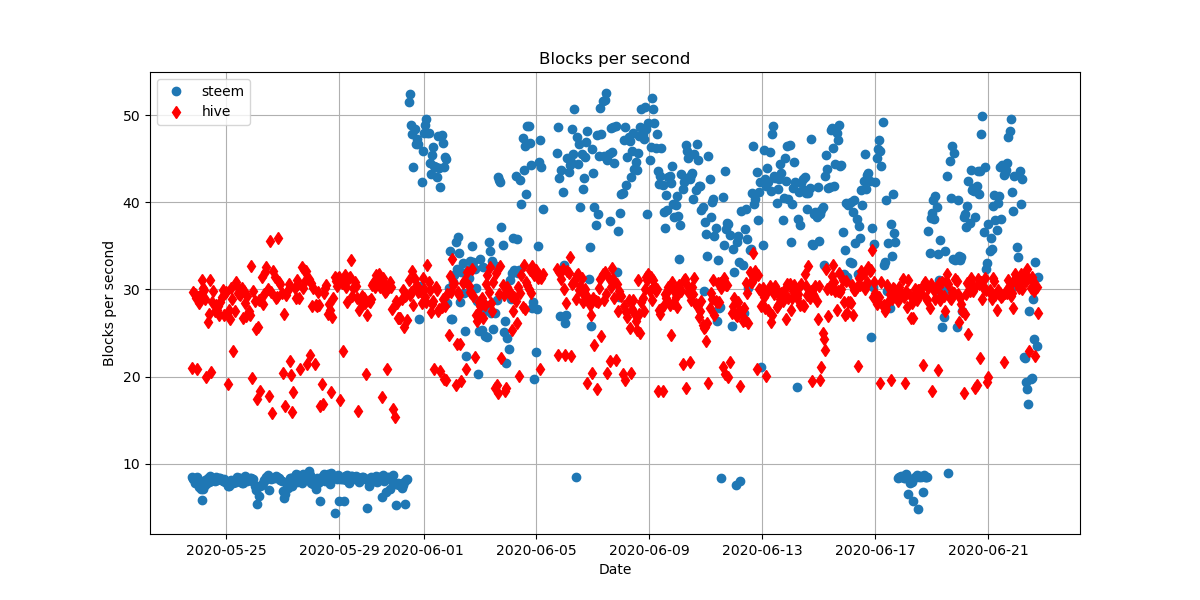 It can be clearly seen that splinterlands has moved on the 1.june to HIVE. The amount of served blocks per second is below 10 blocks/s before this date and jumps to around 35 blocks/s on STEEM. 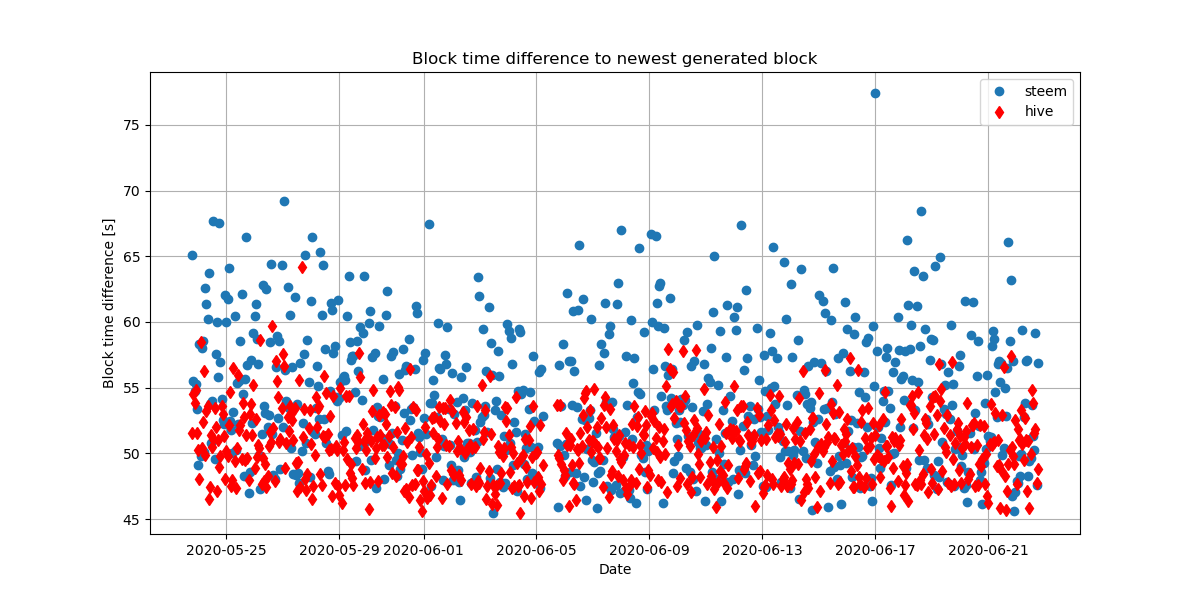 This benchmark measures the time delay of the latest received irreversible block to the current time. The median delay is lower on HIVE.

HIVE shows a consistent API node performance. On June 1 splinterlands has moved from STEEM to HIVE.

If you like what I do, consider casting a vote for me as witness on Hivesigner or on PeakD

Nice to see that our node owners can handle an increase in traffic as big as Splinterlands.

Congratulations @holger80! You have completed the following achievement on the Hive blockchain and have been rewarded with new badge(s) :

On the blocks per second score, where we can clearly see a change in steem reference the splinterlands move, there does not seem to be any change in Hive at all. Does this mean that Hive is more capable of handling/scaling better than steem?

I think it's exactly that, You'd assume that hive should have had a drop in performance with increased traffic since steems performance jumped so much when the traffic moved, with no drop on hive it means it can handle the traffic with no performance drops while steem can not.

That should be a boost to the moral of the developers. I think over-all they have done a good job so far.

This is good information.

Do we have more load balancing info?

How many Dapps use each node?

Are there lighter nodes that people could use to boost performance?

Forgive me if this exists. I have not looked for it, but this post made me interested

Thanks for bringing this in depth analysis about the nodes. I admit that I am no knowledgable in this matter. However, because of wonderful community we have so this brings out to our attention. Great post, following you here and on twitter. Cheers

Honestly I don't really understand everything here but as has been presented in your graphs, I know that hive is doing well compared to steem, thank you for this post...

This is great news!

Great info, but also i dont understand much of it ☺️☺️

I honestly love this
.

Does it mean that hive is having more value than steem?