I always thought that if PokemonGo was a blockchain based game, there would be full time, professional pokemon hunter's making big bucks by playing a game, owning the assets that the game dropped, and selling them to avid gamers.

Well, it looks as if I was not the only one thinking this. Illuvium is aiming to be a full blown RPG where you explore a world riddled with beasts (Illuvial's) that you can capture, grow and battle with them.

Sounds like a familiar game concept? Yes, Pokemon has been a blockbuster both in the RPG world and in the card game world. Splinterlands has definitely had some success with the pokemon style card game and shown that there is a ton of potential for more games of this nature. Well, Illuvium is trying their hand at the Nintendo-famous pokemon game, obviously with their own flavour.

You answer a distress signal in a post catastrophe galaxy. You end up on a strange planet with your drone (who can mine crystals and harvest resources) that is crawling with mysterious creatures. There are also strange crystals known as shards. These shards help you capture monsters. The stronger the shard, the more capable of capturing the creature.

As you explore the world, a mystery unravels involving your own races origins. While capturing creatures and building up their strength, you will learn to battle alongside your creatures.

Combining monsters will grow them in strength and as monsters get captured, their drop rate will continue to slow until they are all captured. In version 1 of the game, there are over 100 Illuvials to capture. Illuvials can be water type, fire type, earth type, air type or nature type and the more powerful have a combination of two types, ie. water+air = frost-type (or two of the same type magnifying that single type's strength ie fire+fire = inferno-type).

There will be a battle arena where you can try your team against other players teams and even wager bets on the outcome (weather a player or a spectator). 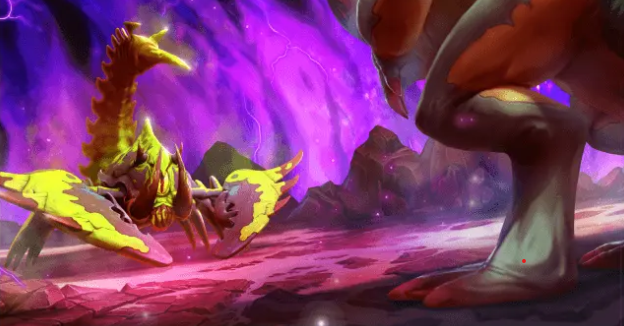 ETH will be used to make all in game purchases alongside sILV (the in-game version of ILV).

These can include Shards (required to catch Illuvials), travel, medical costs (to revive your team after battle), weapons, drone repair and boosting stats of illuvials.

The game will be played on the Immutable X blockchain which provides the capability of 9000 transactions per second and zero gas fees with the security of the ethereum chain. So, the good news is that you will not be paying a ton of gas fees to play the game, but, you will need to move some ethereum to the mainnet to play, so... there will be some gas required no doubt.

ILV is the native token of the game. When gameplay is live (closed beta set to start near the end of 2021, open beta early 2022). You will be able to play and earn ILV. It is currently available for direct purchase on Binance, Sushiswap and many other exchanges.

The current price at the time of writing is $735. There is a max supply of 10 million tokens. Holding the token will give you voting rights in the DAO and could lead to a share of in game profits etc, but will need to be voted on by the DAO when it is fully functioning.

The token has gone through various presales for early distribution and is now being distributed primarily through staking.

Currently, the token can be staked individually and earn (currently) 50% APR, or on Sushiswap paired with ETH for (currently) 200% - 400% depending on if you want to lock up your stake for a year or not. The scale slides up to 400% if you choose to lock it up for an entire year and can be locked up for as little as a week for an extra 4%. 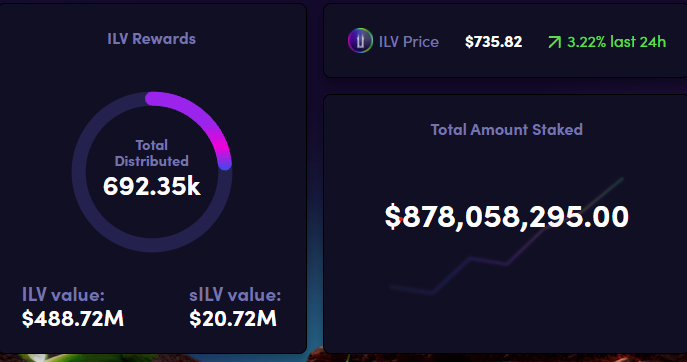 I chose to stake some ILV on sushiswap, but to do so requires a certain level of commitment to the stake and to the project. Staking rewards will not be available for 12 months, although you can watch them accrue. Gas fees to get your stake set up are massive. I spent well over $200 in gas to set up my stake. That said, I have earned $15 (using current prices) in the first day, so it could be fairly lucrative if you hold the course for a decent period of time. It is also not worth staking small amounts with the gas prices I am seeing, so keep that in mind.

If you are going to stake, make sure you follow the staking guide on the website where they have a great dashboard to keep track of your stake and staking rewards.

sILV is an alternative reward to ILV. If you plan on playing the game and are staking, you can claim sILV instantly instead of waiting 12 months to claim ILV. This allows stakers access to currency for in the game. 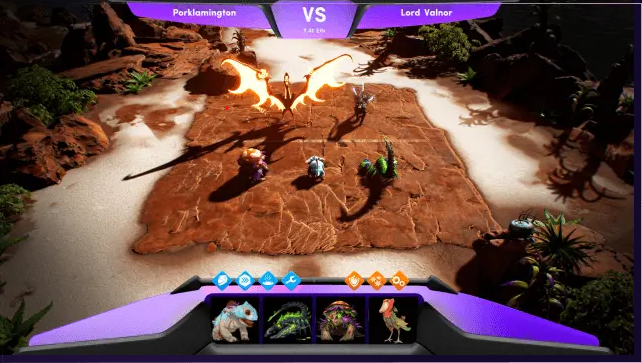 There is a plan for the second version to be released in 2023. There is a land sale expansion that is also coming in the next few months. Things are looking good for this game, which could, if it follows through on their claims, will be the first major blockchain game. Which I take to be a game that can compete with leading computer games such as Call of Duty or minecraft but being on a blockchain.

Monsters that you catch and grow will be yours, stored as NFT's to do what you will with. Much like Splinterlands, I expect the alpha set of Illuvials to appreciate in value a lot. The land will also likely fetch a pretty penny so I plan on getting in on the presale of that as well.

There is a lot for the team to deliver on, but if it can, I see this being a real game-changer for blockchain gaming. One that will potentially bring in a lot more industry player to the space. Think about the Diablo marketplace with NFT ownership and cryptocurrency to spend. It only takes on big blockbuster game to make the masses realize that there is no point paying to play a game that doesn't offer you the chance to make money playing it.

Illuvium will be free to play. You will be set up with a character and a drone who is capable of mining shards to catch monsters. The shards you start off with won't be able to catch big / rare / powerful creatures. But will let you get your feet wet. Obviously, like most games, the growth rate accelerates as you throw down some funds.

Early to the game?

Well, the really early adopters got to buy ILV for $1 in January. But, the game is yet to be released and the APR's still look pretty juicy for stakers. Being ready to play on day one could be a lucrative play in and of itself, but the real early adopters have already made out like bandits. I think it is still early.

I am excited for this game to drop. I am excited to try my hand at catching some rare monsters. I am also excited to see what sort of domino effect this will have on the gaming industry as a whole.

All of the info, images and video was taken from the Illuvium Website where there is a lot more information about the game, the DAO, the team and the token. Thanks for reading.

A pity they went for ETH and not HIVE...

Yeah, projects on ETH tend to gain a lot of traction as the ETH community is huge. I think HIVE is a better chain for a bunch of reasons... but there are a lot of ETH people that seem to pump a lot of value into everything on that chain. For a game like this, ETH is almost where it needs to be. Hive's day will come, but it is not yet here (which is good news for us as we are the early adopters).

This is why HIVE could seem seriously attractive to the future of blockchain gaming!

Interesting looking game, I do like the visuals a lot. Thanks for making a nice presentation of it. Keep coming more blockchain games.

Thanks! I was really pumped to see this tribe start. Rest assured... there will be a lot more games coming down the pipe and this tribe is prefect for all of them. I will post every time I see a good one that I feel is beyond a crypto ponzi and could take off.

I haven't worked up the courage to buy, but I am part of the discord watching closely.

This is the kind of material Iwant to see more on 1UP, as well as for Leo Alpha. Well done!